Russian tsars: view from the West. Part of 2: Khrushchev 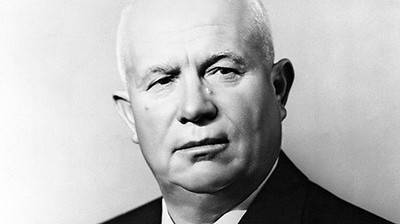 The image of Nikita Khrushchev in the West, of course, depended on how the strategy of the United States and its allies in the Cold War was changing. At first, Western contemporaries praised the “Khrushchev thaw” and pinned great hopes on the new Soviet leader. He was called the "young reformer" who is able to build an "open society" in the USSR. “Unlike the former leaders of the red empire,” wrote the London Times, “who walked in identical costumes, coats and hats and plotted intrigues behind high Kremlin walls, this is a living normal person with whom you can deal.”

In the West, they emphasized that Khrushchev “debunked the personality cult of Stalin”, released political prisoners from prison and began traveling around the world, earning the nickname “tireless traveler”. Already the first trip of Khrushchev to India was perceived as a reform of international relations. Indeed, in recent years, Stalin did not leave the limits of the Garden Ring.

True, it is worth noting that the old European leaders, who greatly respected "Uncle Joe", were condescending to his successor. De Gaulle called Khrushchev a “cunning muzhik,” and Winston Churchill even reprimanded the Soviet General Secretary for the fact that at the XX Congress he “desecrated the memory of a true hero.”

In Europe, many sneered at the rustic style of the new leader of the USSR. However, the simplicity and immediacy of Khrushchev allowed him to conquer the Americans. In September 1959, at the invitation of President Eisenhower, he arrived in the United States. The state visit has become a real political show. Khrushchev asked him to arrange an acquaintance with America and traveled on a special train through the whole country: from the east coast to the west and from the west to the east. The event was covered by at least five thousand journalists. “On such a scale,” wrote the New York Times, “not a single election campaign was covered in the United States. The Soviet leader conquered the crowd with his "Khrushchev smile." And the Americans dubbed him a "good gnome."

“Khrushchev went out at the stations,” the historian Roy Medvedev said “However,” spoke, argued, cursed with local politicians, with trade union leaders, and easily talked with ordinary people: farmers and workers. ” According to Khrushchev’s personal translator Viktor Sukhodrev, “the Soviet Secretary General appealed to the Americans. He did not hesitate to say what he thinks. He took out the text of his speech, read the first paragraph, then folded it and said: “Well, that I will read you the material I have prepared in advance, I’ll better tell you about my impressions of today.” Sometimes straightforwardly, too straightforwardly, sometimes rudely, but in an American way or something, he expressed his thoughts. ”

Khrushchev's looseness, his simple manners allowed the Americans to completely overcome their cautious attitude toward the Soviet general secretary. It would seem that the leader of world communism, the owner of nuclear weapons, an opponent of the cold war and suddenly such an enthusiastic reception. American journalists said after the trip that if Khrushchev had nominated himself for an official position, be it mayor or senator, he would have defeated any American opponent. And with a huge margin. The Soviet First Lady made a pleasant impression on the Americans. “With all her indifference, lack of glamor, as they would say today,” Sukhodrev notes, “America loved Nina Khrushcheva very much. In the media, it was even dubbed the "universal grandmother."

However, a year later everything changed. An American U-2 reconnaissance aircraft was shot down over Sverdlovsk. And instead of using the fact of espionage as a trump card in negotiations with Eisenhower, Khrushchev decided to slam the door loudly. On the Baltic ship, he crossed the Atlantic and appeared at the UN General Assembly session, where he cursed the imperialists and allegedly knocked on the table with a shoe.

His image in the West immediately changed. “Khrushchev showed his teeth,” the Daily Gerald wrote then. “Since Hitler and Stalin, no one has tried to intimidate us like that.”

“They began to portray him as a completely unpredictable leader,” recalls Mikhail Lyubimov, a veteran of the foreign intelligence service, “to quote the phrase“ We will bury you ”, which indulged in a much more threatening tone than Khrushchev put into it.” Western observers puzzled over the frightening image of the “mother of Kuzma”.

When John Kennedy came to power in the US in 1961, and the USSR built the Berlin Wall, Khrushchev's smile and natural charm in the West were completely forgotten. The young president called his Soviet counterpart "a prudent, cruel, energetic, and self-confident leader." And the CIA officers, who instructed him before the first meeting with Khrushchev, warned that they would have to deal with a characteristic actor who was ready for everything: just to play his intended role. “If he is prevented,” the Central Intelligence Agency’s report noted, “he will start stuttering, his vein will swell up on his left temple, and he will turn from a sincere and touching guy into an implacable enemy.”

Khrushchev was portrayed as an “adventurer,” whose actions are impossible to predict. “Why, one wonders, did he quarrel with Tito? - wrote the American magazine The Foreign Affairs. “Why did they withdraw the Soviet allies from China?” Why provoked the Caribbean crisis? ”

For a long time, the excitement characteristic of Khrushchev was served rather as a passion for peaceful competition. In the US, they cited the slogans “Catch Up with America and Overtake America”, “Hang On, Iowa Cow!” Talked about corn crops with a grin and stressed that it was the Soviet leader who initiated the space race (on the cover of Time magazine he appeared in the hands with a satellite) .

However, after the Caribbean crisis, the Western media have already painted the image of a dangerous despot, who from innocuous competitions can easily switch to nuclear confrontation. “The unpredictability of Mr. Khrushchev causes great concern,” wrote the New York Times. “An attempt to install Soviet missiles in Cuba is an incredible adventure, which I must say, was almost a success.”

In general, if in the 50s of the Stalinist successor, it was advantageous to present a pragmatic politician who deeply believed in the success of his ideology, then the installations in Washington changed and Khrushchev turned into an unrestrained and aggressive petty tyrant who bit off too much of a pie of power and could not swallow it.

"Commoner on the throne"

As for Western historians, they have been promoting the image of a “peasant on a throne” for half a century. “In this little bald little man,” writes William Taubman, an American biographer of Khrushchev, “the dreams of the first Bolsheviks, who wanted to put a commoner at the head of the empire, were embodied. Only in practice, these dreams led to the collapse of the empire. An agitated and hysterical ruler was not able to cope with the legacy of the Red Kings. ”

According to the American Sovietologist William Thompson, in his diplomacy Khrushchev was guided by the slogan "Be my friend, or I will break your neck."

And only a few researchers look at the Soviet secretary general more balancedly, knowing full well that only a cunning and resourceful politician, whose impulsiveness was often feigned, could lead the second superpower.

Ctrl Enter
Noticed oshЫbku Highlight text and press. Ctrl + Enter
We are
Diplomats of the People's Commissariat of Defense: on the eve and during the warMyths of the Great Patriotic. Did Stalin have prostration in the first days of the war?
35 comments
Information
Dear reader, to leave comments on the publication, you must to register.