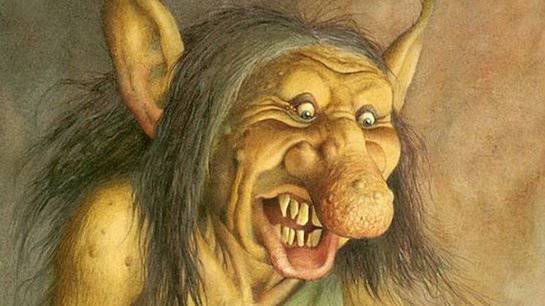 In the December days of the new Kiev "Euromaidan" I decided to republish my book "The Revolution in the Swamp", written about the Maidan-2004. Finally, the decision matured in the morning of December 12. Immediately after a message appeared in the press that the morning before the Kiev “Golden Eagle”, poured with water, refused to storm the City Council, and the delighted “maydauns” returned to their camp under the BABE WITH SHASHLYK, as the Monument of Independence was jokingly called, and began to build barricades of snow and debris.

And in fact, and in another case, the main role was played by the elements of water.

The rebels decided to rely on the water turned into ice, piling up their "inaccessible" ramparts.

The Ukrainian revolution once again lived not with fire, but with moisture.

But not alive, but MALF!

After all, initially this place, through which Baty burst into Kiev through the frozen quagmire in 1240, was called the GOAT. In the Maidan, it was renamed only in 1991 year in honor of Ukrainian independence.

Once again, I marveled at the fabulous symbolism of current events.

The goat is a devilish animal.

No wonder the hell goat horns.

Well, since there is a swamp and goats, then KIKIMORI must be somewhere nearby.

Quikimors took the place of the princess of the former Maidan — the demonically beautiful Julia. This is also symbolic. New Maidan turned out with the prefix "euro". And in Europe they do not like beautiful women. There today in honor feminists and homosexuals.

The first fighter was found right on the Euromaidan scene. Her name was singer Ruslana. She danced her “Wild Dances” and promised to burn herself if Maidan ended in failure. Sly beast!

It is clear that she did not even think about burning herself. The expensive (in millions!) Apartment "Kikimory" is located two steps from the Maidan - right on Khreshchatyk next to the casino. There is a desire to check my words - after leaving the Khreshchatyk metro station, turn left, go into the courtyards and ask the locals. With such a Kiev HUTA, like Ruslana, they do not fire themselves! Even complete fools. 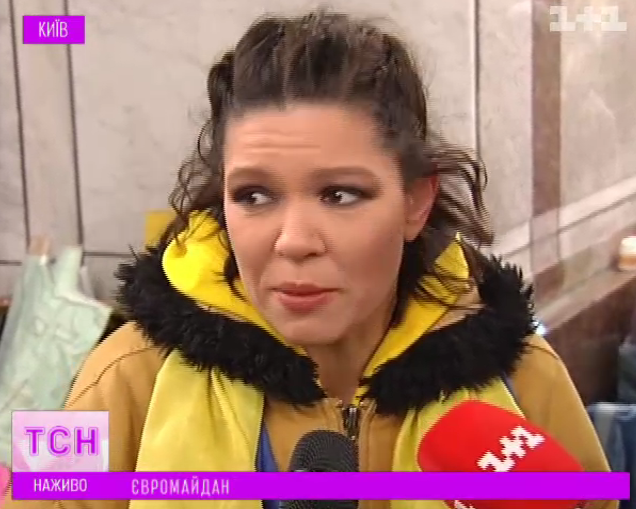 The second Kikimora, Ksyuha Sobchak, barely hearing that Kiev was in turmoil again, immediately squeezed out encouragingly from Moscow on the Internet, slyly gleaming with glasses: “I hope that what we did not succeed at Bolotnaya will turn out in Kiev on Maidan!” 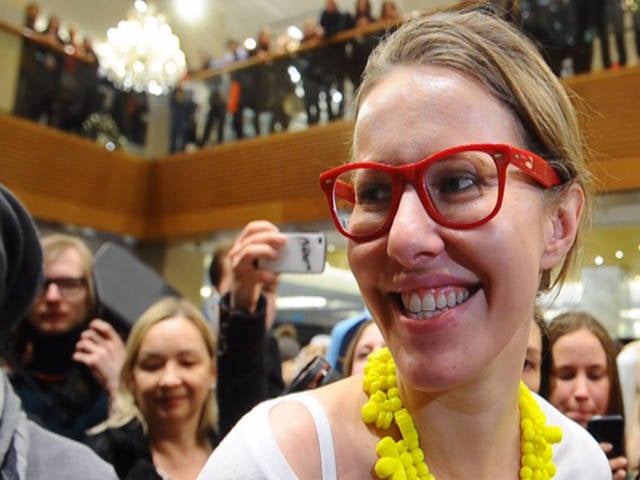 Here is a learned monkey! Immediately I sensed the mystical connection between Moscow Bolotnaya and Kiev Goat Marsh.

One more Kikimora could emerge from the Maidanian Mud - Fahrion. From Freedom. But this witch literally on the eve of Euromaidan got into a scandal - the front-woman ultra-nationalism turned out to be a “komunyak”, who hid her prehistoric past. You can't even wash it with swamp water. As I understand, Fagonsiu’s fooled off, because of the faith she had undermined in her, the frigid growers of the Maidan decided not to release the stage. And so enough dirt! 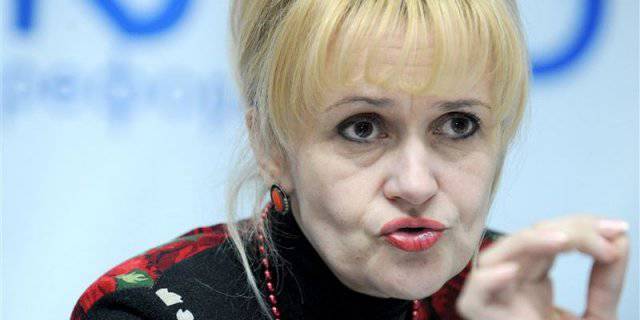 Instead, two Kikimorus were brought from Europe at once — Guido Westerwelle, head of the German Foreign Ministry (Guido, being a passport man, married her fitness trainer three years ago) and Catherine Ashton, the EU foreign minister. Seeing with my own eyes this overseas kikimoru (by the way, the English Baroness!), I forever ceased to be surprised at the prevalence of Sodom's sin among the British aristocracy - Ashtonshi's collective farm gelding will be more beautiful! And much more! 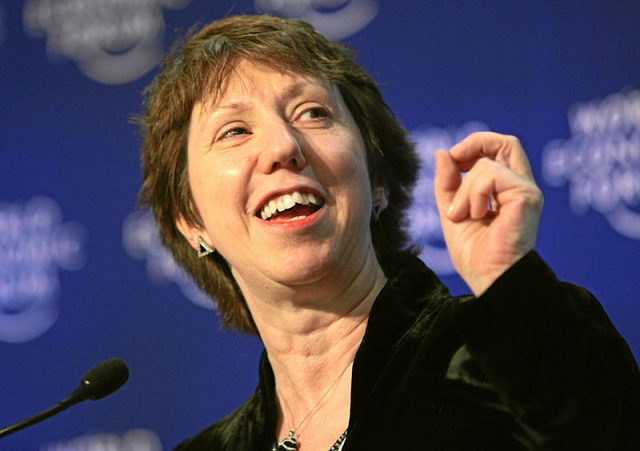 Both “degenerates” - the ministress-horse, and the minister- (cenzor) orr, naturally agitated for the “European” future of Ukraine. 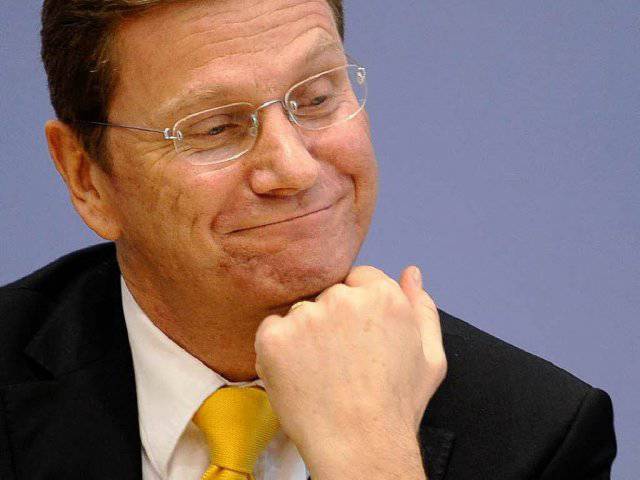 And the fact that all this marsh action has been prepared for a long time has been evident already since summer. Even then, Kiev newspapers wrote about secret training camps of the “Svobodovtsy”, where no journalists were allowed to go. And near Maidan, on the street with the telling name Kostelnaya, in the heat of summer, Slavik Vakarchuk was seen. A friend of Ruslana's fighter kikimora stood with a mobile phone near a expensive jeep and looked after an apartment for rent - in order to get closer to Goat Marsh. He boosted "biomass" and immediately basked in a bubble. Well, the fee for the "performances" count.

An apartment on Kostelnaya (not even a conspiratorial) is expensive. So, the budget for Euromaidan laid a fair. Any revolution is money, money and more money. This is crucial for the success of any coup, as the late Ilyich said.

The more you put into the dark rampage of the “masses”, the steeper you get the record in their brains with singers and singers (with live tape recorders aimed only at getting a fee), the BIGGER PROFIT you will get as a result.

Isn't it interesting to gain control over such a rich country as Ukraine?

Just do not convince me that our country is poor and poor.

We have a rich country. In it, "revolutionaries" ride on jeeps and convene each other on a sabbath on iPhones. She has a territory like France. And under the territory, thickly plastered, like butter, with a thick layer of black earth, which is all there is! And iron, and manganese, and coal (even brown, though stone, even with a narcotic name coke), and asbestos, without which no melting is possible, and deposits of pure salt, and URANE!

Four nuclear power plants - including Zaporizhzhya - the largest in Europe! In Germany, whence the centenary arrived at the Goat Swamp (cenzor), op-minister, not one. And we have FOUR! Electricity has nowhere to go.

The water in Ukraine is clean. And a lot of this water! And in the XXI century, and this is a resource. In Africa and half of Asia they drink urine. Officially, like water, and the color is yellow, like urine. Where have you seen the water of yellow?

No, dear compatriots, you underestimate Ukraine. Twenty-two years have been robbed and destroyed by all and sundry, and the planes are still taking off from the Kiev Aviation Plant and helicopter engines from Zaporozhye Motor Sich are being exported to Russia. And not only helicopters - Motor Sich produces (think!) 55 types and engine modifications for 61-type airplanes and helicopters.

How many types aviation engines produced by an EU-member Croatia? No one! And there will be no release. Never. In no weather. Under no political regime. Bulgaria? ZERO! Slovenia, Portugal, Greece? The same answer.

But all these countries are members of the European Union. They say in Greece everything is there. It turns out, not quite. Something not. And, most important for the MODERNITY and FUTURE. There are no aircraft engines, nuclear power and Ukrainian black earth in Greece. Rather, there is a Norwegian herring and starts his Breivik. But the production of aircraft engines and Greek chernozem will not. I give you a guarantee.

Now you understand FOR WHAT on the "sacred" for sex menshevik Guido Westerwelle and the mare Ashton Maidan walls of shit and ice, there is a war in the Goat Marsh?

Now it has come to you that THAT Sunday, the heroic Kiev "Golden Eagle" and ordinary soldiers-conscripts of the Internal Troops, who were hired by the "evrobydlo" rode a tractor, defended near the Presidential Administration last Sunday?

WOULD MEET IT SO ON THE WHITE HOUSE IN WASHINGTON OR ON THE ELISEAN PALACE IN PARIS!

Who is the traitor of Ukraine today? I will answer: the one who drags her into slavery to the European Union. Vakarchuk, Ruslana and other kikimory. Poroshenko, Klitschko, Tyagnibok, Yatsenyuk and - further on the list to the very small "bit".

Two steps from the betrayal were Yanukovych and Azarov. The only thing that saved them was that they turned the shafts in time in front of Vilnius.

I don't know what made them think of it. What God saved, then we'll figure it out.

But it was in the days of Euromaidan that I finally understood WHAT a country they want to take away from us the euro (cenzor) ora. I realized that we must fight not for the ghost of the past, no matter how beautiful it may be, but for the real piece of Native land and its FUTURE. For myself.

And then in Moscow on Channel One, in the talk show Politika, he expressed his most important thought so far: “Cheap Ukrainians are over!”

This phrase paid attention. She was remembered.

I repeat, I am (just like that, with a CAPITAL letter!) Oles Buzin - DEAR HOHOL. Very expensive. I do not see in this wording anything offensive to myself. But I can clarify - VERY DEAR UKRAINIAN. Just Precious. Not at all cheaper than Einstein, Washington, and certainly, a thousand times more expensive than Guido Westerwelle and Catherine Ashton with her horse muzzle. Not - cheap extras for spurring Ruslans and Vakarchuks, and CITIZEN OF INDEPENDENT POWER.

All those who join the CLUB OF DEAR UKRAINIANS, join.

Not for this, I voted for the INDEPENDENCE of UKRAINE in 1991, so that an EU resident, an illiterate worker, Klitschko, together with a candy shopkeeper and a retired Lviv medical assistant, turned her into slavery with the excretions of European mares and (cenzor) frames - Ashton and Westervell.

We are the descendants of Russia. Same as Russians and Belarusians. Russia did not bow to anyone. Russia itself took everything that was bad. And Ukraine is, as it should. Just between the European Union and the Russian Federation. And shift it bye should not. This is not a phone, on which, scratching like a monkey in the groin, agrees to rent an apartment Slavik Vakarchuk.

Not forks Lyashko, on which he sits. And not a bag of shit, from which cheap 25 euro-traders on Hryvnias per hour build their “barricades” in Koziem Bolot.

Barricade of shit - a symbol of pissed off revolution.

In the 1917 year in Petrograd, the Bolsheviks did not build barricades. They took Winter. The barricades were built by the losing 1905 revolution of the year in Moscow.

Remember: ONLY BACKLESS REVOLUTIONS are fenced off from reality by walls. More precisely, not even a revolution, but insurrection. As the poet John Harington said: “Rebellion cannot end in luck. Otherwise, his name is different. "

The events of 2013 of the year, unlike 2004, showed: the vast majority of Kiev residents are not behind the Maidan. There are no psychoses of eurobags in the city, although Lutsenko, mastering the revolutionary budget, has distributed them pretty well since the autumn near the metro stations.

Nine years ago, all of Kiev was in orange ribbons. Today, only ONE time (!) I managed to see on the car's blue antenna with yellow asterisks (euro colors (cenzor) of oors and the worship of a golden calf) a ribbon of the European Union.

Euromaidan organizers lie about the march of millions. In reality, they have to bring to the Maidan "biomass" of a very non-European type from somewhere in the Carpathian foothills and not to disdain even homeless people.

There is no march. Instead of a march, they build a wall of shit.

This is not the material from which states are erected. Somewhere in the depths of the soul, even Yatsenyuk and Tyagnibok guess that IT is not suitable even for a hut.

Ctrl Enter
Noticed oshЫbku Highlight text and press. Ctrl + Enter
We are
"In Kiev, we fought with werewolves." "Golden eagle" told about secrets of the Maidan: snipers, capture of a mortuary, underground smithyTsar Batu
319 comments
Information
Dear reader, to leave comments on the publication, you must to register.