The second face of Europe 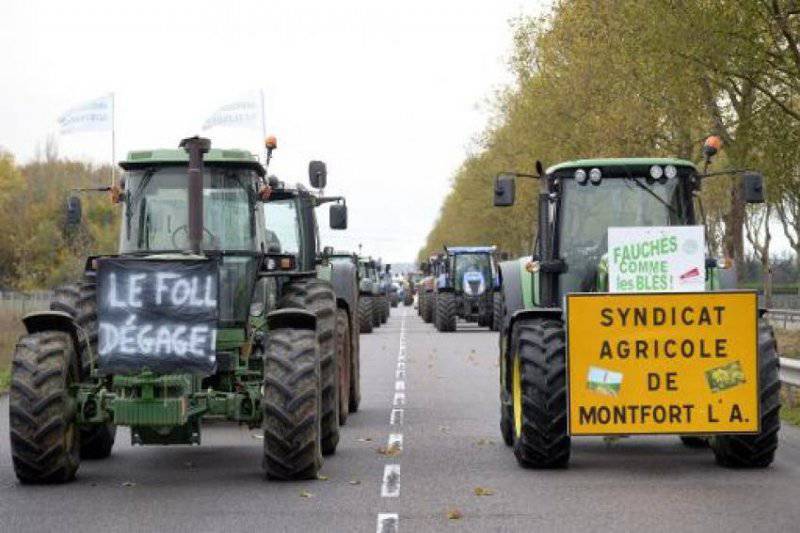 Farmers of France rebelled! At the very least, such headlines should show off on editorials of European newspapers. Compared to what is happening in France now, barricades in the center of Kiev seem to be just fun in the sandbox. And this is despite the fact that international media at every turn are trumpeting about “violence against the conscious citizens of Ukraine”, keeping silent about large-scale social protests in the very heart of a supposedly prosperous Europe.

In November, simultaneously with the start of the new Maidan, a riot of Breton farmers began in France. Agrarians opposed the introduction of a new "environmental" tax, as well as against rising unemployment. Risen Brittany was also supported in the center of France: an 30 thousandth demonstration took place in the René department and was dispersed by police using special means. One of the protesters was blown away by a gas grenade blast, and many were chilled in the cold after the crowd had been poured cold water from their hoses. Yeah, "Berkut" can not keep up with the French police!

French Prime Minister Jean-Marc Herault, as a true European, said that the problem should be solved at the negotiating table, and speeches are unacceptable, and gave the order to suppress the rebellion as soon as possible. Haste led to bloodshed. Now, as French political analysts suggest, after the Rene massacre, simply canceling the “eco-tax” will not help, and the main minister along with the entire cabinet will have to resign. Paris is blocked by tractors of furious farmers, the same situation in Strasbourg.

9 December, a month after the massacre of demonstrators, its readiness to fight for tax cuts was announced by the National Union of Liberal Professions (UNAPL), a trade union organization that unites small entrepreneurs who work for themselves. These are lawyers, private teachers, accountants, doctors, notaries, heads of sports sections and other highly qualified specialists. Representatives of the liberal professions make up 27% of the French labor market and 25% of the total jobs in the country. If the promised strike takes place, the country will be paralyzed.

UNAPL activists have already compiled a petition and placed it on social networking pages. Now the number of signatures collected under the document has exceeded half a million. The leaders of the trade unions declare their solidarity with the Breton farmers and do not exclude that they can unite with the farmers in the future.

It's no secret that West European farmers exist solely through state subsidies, and only thanks to financial support can they compete with farmers from other regions of the world. According to statistics, a European farmer needs to spend calories from 1 to 6 calories for fuel to produce 10. If the state stops financing farmers, they will go bankrupt in the blink of an eye. The continuous transfer of money from the budget to the agricultural sector creates the appearance of prosperity: they say, Asians, what new combines we have! Meanwhile, Asian manually, without any special expenses for the purchase of expensive fuel, is able to produce the same amount of products in almost the same time frame. And only because of the subsidy policies of the countries of Western Europe, have agricultural products from Asian and Latin American countries still not gained leading positions in the international market.

Thus, French, Belgian, Dutch, English, Spanish, German farmers are forced to count every penny. The introduction in France of a new “environmental” tax on car exhausts will bring down the already small budget of local farms. European farmers rightly fear that they will not be able to compete with Asians and Latin Americans, and therefore excess contributions to the budget are unacceptable for them. It seems that the deepest systemic crisis in agriculture in the countries of Western Europe is about to reach its climax.

The above problems are exacerbated by budget deficits and the global financial crisis. In order to fulfill its social obligations, the government urgently needs to take money from somewhere, and the easiest way to do this is by raising taxes. But the fact is that because of the close policy of Francois Hollande and his predecessor, Nicolas Sarkozy, the army of the unemployed French is only increasing, and the number of employed citizens, respectively, is decreasing. So the minority has to feed the majority?

In addition, losing their jobs, the French are left without livelihoods. How to afford the services of a dentist or music tutor, if the money is barely enough for a trip to the nearest supermarket? Dentists and tutors are well aware that they can be left without clients due to rising unemployment and higher taxes. A vicious circle: as soon as someone goes bankrupt, those to whom he applied for services automatically become poorer. Given the bloated share of the service sector in the French economy, the bankruptcy of individual entrepreneurs is about to acquire a catastrophic scale.

To comprehend the depth of the crisis that hit France, you can examine the economic performance of this country. So, according to the results of the outgoing year, the French economy has shown zero growth. In the autumn, youth unemployment reached 25% and among the entire population of the country - 10,9%. The Fifth Republic has not encountered such antirecords since 15 for years: the last time such a jump in unemployment was observed only in 1998.
France no longer meets the Maastricht criteria, according to which all members of the European Union should keep the budget deficit at no more than 3% of GDP. According to official data, in 2013, the French budget deficit reached 4% of annual GDP. At the same time, the international rating agency Standard and Poor's downgraded the credit rating of France. It seems that Paris is in danger of being in the same boat with Athens, Rome, Madrid and Lisbon. Lost Club PIGS awaiting replenishment.

The speeches of French farmers and small businessmen - the most active layers of the population interested in fair play by the government - are not the first signs of the upcoming economic collapse of Western Europe. Farmers of Benelux strike almost annually, and leftist performances on the Iberian Peninsula and in Italy are not surprising. In the long run, Europe will regress. In order for national economies to stay afloat, European governments must urgently undertake radical and unpopular reforms in the people. In particular, it is necessary to completely abandon subsidized agriculture in order to oust expensive machines from agricultural production. This will not be a step back: it would be wiser to increase the efficiency of manual labor through the introduction of the latest crop rotation technologies and better soil care. So now they are doing in many countries of the third echelon of modernization.

In addition, the changing international trade routes and the growing importance of the Pacific and Indian Oceans, as well as the Eastern Mediterranean, far from the Atlantic coast, must be taken into account. If earlier Europe was the “navel of the earth,” now the balance is shifting in favor of Asian states. In order to survive in the new conditions, the European Union will have to withdraw into itself, avoiding contact with the “aggressive” outside world. Therefore, the reform of agriculture and the return of industrial enterprises back to Western Europe will be for European politicians and entrepreneurs the main problems of the beginning of the 21 century.

Meanwhile, the protests in France are gaining momentum. As in the Arab world, they were initiated by small entrepreneurs, whom the state "does not breathe." And then other mass of people who were dissatisfied with something joined the businessmen working without licenses. The apogee of the confrontation was the appearance on the stage of paid-for-known radicals, who, however, without American-Saudi money gained popular fame in Tunisia, Libya and Egypt.

Will the demonstrations in France not become the catalyst of the “European Spring”? After all, if you think about it well, Europe has accumulated quite a lot of difficulties, starting from an inefficient financial system and ending with outdated business management methods. You look, after the first blood in Rena, individual entrepreneurs will catch up to the farmers, and there it is not far to the students with hired workers ...

Ctrl Enter
Noticed oshЫbku Highlight text and press. Ctrl + Enter
We are
Results of the week. "God forbid to see Russian revolt, senseless and merciless!"Results of the week. “Why is the war going on? Do they not read newspapers? ”
71 comment
Information
Dear reader, to leave comments on the publication, you must to register.