December 17 2013
23
Work on the creation of infrared devices that could provide driving combat and transport vehicles at night, as well as the possibility of aimed shooting from guns and small weapons in the dark, were in Germany since the beginning of the 1930-s. In 1939, AFG presented the first infrared sight suitable for use in the military. His tests were carried out on the 37 / 35 XRUM Cannon, but their results did not satisfy the military. It should be said that it was not a night sight in the modern sense. The gun was equipped with a device that provided visibility at night, and the gun was guided along the barrel. Nevertheless, it was a serious success in this area.


In the fall of 1942, tests began on a similar device for the 75-mm Cannon 40 cannon, which ended in the middle of next year. In spite of the fact that quite good results were obtained - the aimed shooting could be conducted at a distance of up to 400 m - the control of the armaments of the ground forces attracted the adoption of the device. At the beginning of 1944, AEG, without waiting for a final decision, manufactured 1000 sets of such devices for the 40 Cancer.

The test results of infrared devices were quickly assessed by the inspector general tank troops G. Guderian. In the summer of 1943, infrared equipment was demonstrated to him at the Fallingbostle test site. After that, Guderian ordered to begin work on equipping Panther tanks with such devices. The design of new models was supervised by Doctor of Technical Sciences H. Gertner, who worked in the testing department of sights and optical devices (WaPruf 8) of the Army's Armaments Directorate. The production of prototypes was carried out by the enterprises of the companies AEG and Zeiss. 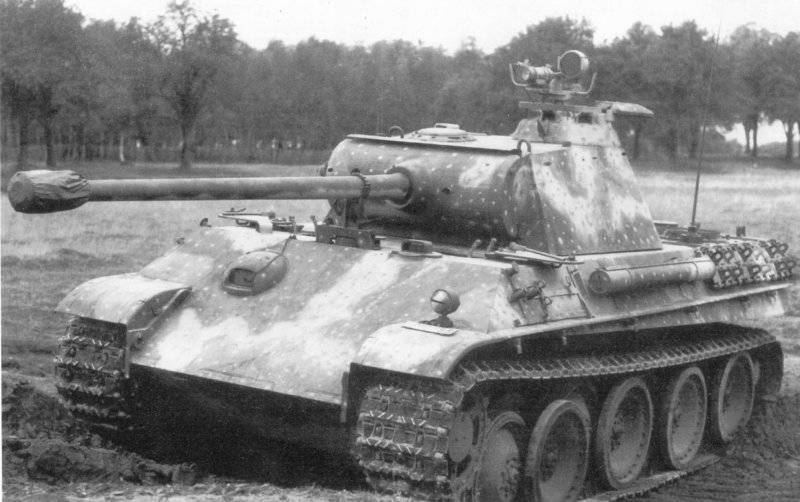 Tests of the tank "Panther" Ausf. G with a tower mounted infrared device FG 1250. September 1944 of the year 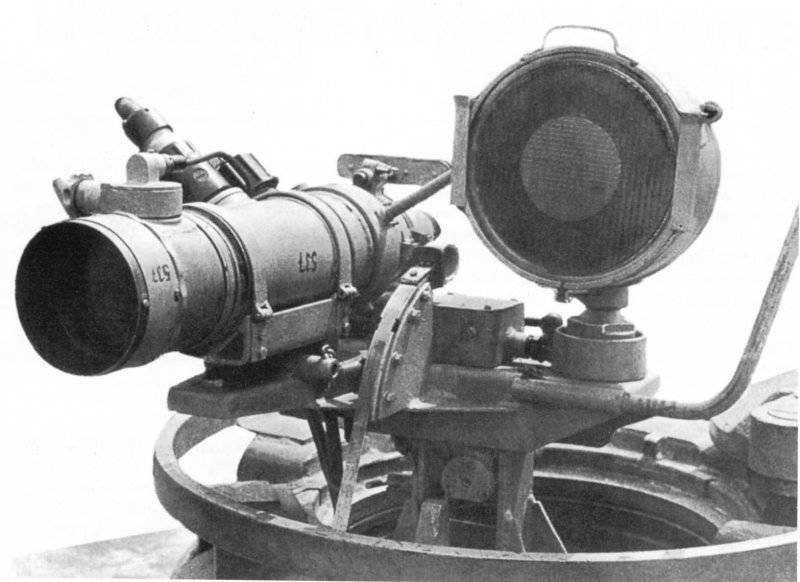 General view of the installation of an infrared device FG 1250 on the commander's turret "Panther" Ausf. G. September 1944 of the year 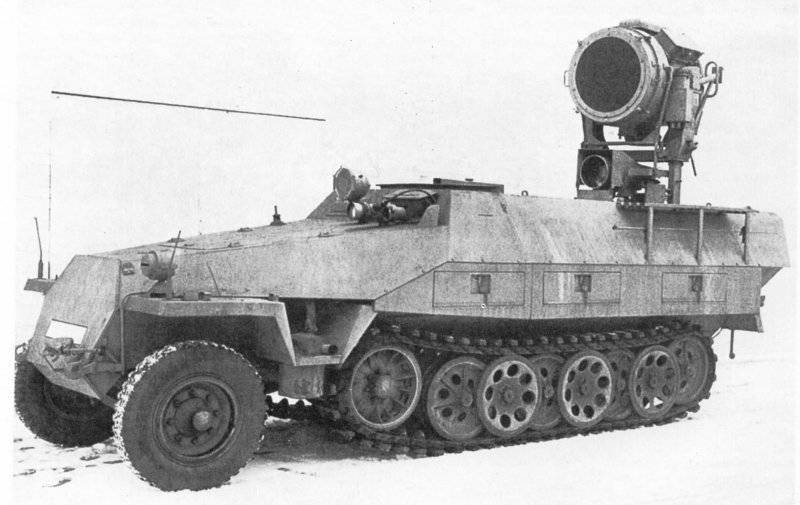 By the summer of 1944, AEG had manufactured and tested several types of infrared instruments that had a common design. They consisted of an infrared headlight, an image converter, batteries and a generator. In this case, the instrument headlights could be of different diameters, but they all received the designation “Uhu” - the eagle owl. Depending on the destination, there were several instrument options: three types for night firing “Zielgerat” 1128, 1221 and 1222, the same for night driving “Fahrgerat” 1250, 1252 and 1253, and one for observing the “Beobachtungsgerat” 1251. Mainly among themselves, these devices differed in size of headlights, converters and could be installed on tanks, self-propelled guns or cars.

In the first decade of September 1944, on the "Panther" Ausf. G MNH (presumably chassis No. 128495) first installed the infrared equipment FG 1250 (in the literature this device is often called a sight, which is not true: the FG designation is an abbreviation for Fahrgerat - a device for movement.). This set on the "Panther" received the designation "Sperber" - sparrow hawk.

For the installation of infrared equipment, a special bracket was welded inside the commander's turret to the scale of the azimuth pointer, which had divisions from 1 to 12. In the turret in front of the commander's turret, a hole was drilled for the steel strip connecting the infrared sight with the vertical tool guidance mechanism. In the back of the case, instead of the right box for the property, four plates were welded to fasten an armored container in which it was supposed to store infrared equipment. In the fighting compartment (at the starboard side), instead of laying on three artillery shots, a rack was mounted for the GG 400 electric generator and the battery, which ensures operation of the device for four hours.

In the same month, the vehicle underwent tests that showed satisfactory results - the device provided the tank commander with visibility up to 400 meters. True, while driving and, especially shooting, demanded great skill and coherence of the crew. The fact is that only the commander who gave commands to the driver and gunner could see the road and the targets at night.

In order to increase the field of view at night, we designed the “Uhu” searchlight of a larger diameter - 600 mm. He was installed on the Sd. Kfz. 251 / 20, which received its own name "Falke" - falcon. With the help of this device one could “see” at night at a distance of up to 600 meters. The Sokol was supposed to act together with the units of the Panthers, detect targets and report them to the radio by tank crews. It was supposed to attach one armored personnel carrier to a company of five “panthers”, also equipped with infrared equipment.

According to a schedule approved by 7 August 1944 of the year, MNH received instructions from the Army Arms Directorate for installing FG 1250 infrared equipment in accordance with the following schedule: 50 machines in September, 70 in October, 80 in November and 100 in December 1944. In turn, the firm offered to end all 120 Panthers with FG 1250 in October, instead of putting them in September and October. 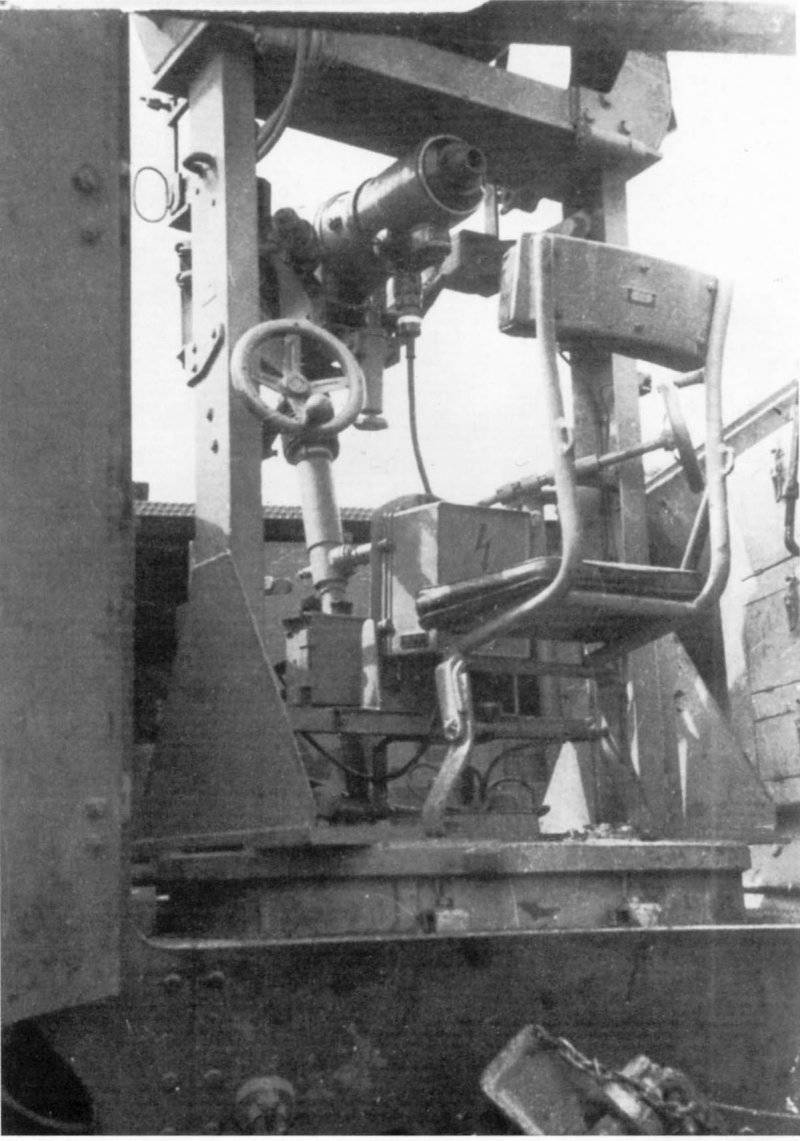 Rear view of the operator's position 600-mm infrared searchlight armored Sd. Kfz. 251 / 20 Falke. It is clearly seen that the operator’s seat is also equipped with an infrared device (ASKM)

But the very next day, August 8, due to the difficult situation on the Eastern Front, the Army High Command rejected the MNH proposal, insisting that the first panthers with infrared devices be surrendered in September 1944.

Due to the delay in the receipt of technical specifications for the acceptance of tanks with FG 1250 equipment, in September 1944 of the year MNH manufactured only 20 Ausf panthers. G with infrared devices. The installation of FG 1250 on 30 machines of the September program was “shifted” to October. And then in November.

But on November 18, 1944, the MNH company, received orders from the main command of the ground forces to cancel the installation of the infrared equipment on the “panthers” already prepared for this. Tanks converted into ordinary cars modifications Ausf. G - the brackets for the transformer and the FG 1250 device were removed from them, the spare parts of the spare parts were installed on the stern instead of the armored container. True, at the same order it was prescribed to equip 30 “panthers” with 1944 infrared equipment in December. MNH was later instructed to install FG 1250 devices on all “panthers”, starting 15 in January 1945. Accurate data on how many tanks equipped with infrared equipment is not. Based on information about sending "panthers" with such devices to the troops, it can be assumed that they were of the order of 55 — 60 pieces.

Apparently the first to receive the "Panther" with infrared equipment 3-I company of the 1-th battalion of the 24-th tank regiment. At the end of November 1944, this company in the tank school of Bergen, near the city of Fallingbostel, began crew training here. According to the memoirs of E. Bernard, who served at that time in the 24 regiment, during combat training, the crews at night hit targets at a distance of up to 2500 meters. According to the author, this distance is five times too high - the characteristics of those infrared devices could not provide such high results. At the beginning of the 1945 of the year, the 3-th company of the 1-th battalion as part of the 24-th tank regiment headed for the front in Hungary. True, all infrared equipment was left in Fal-lingbostel. The reason why FG 1250 devices were left at school is unknown.

2 February 1945, the tank inspector general, ordered the 1 company of the 101 tank regiment of the Fuhrer's Grenadiers (Fueher-Grenadier-Division) to begin military tests of the FG 1250 infrared device. For this, ten "panthers" of the company were sent to the Altengrabs, where the Daimler-Benz company sent its engineers to install the equipment on the tanks. According to the reports of the “Daimler” representatives, the installation of infrared devices passed without any problems. In addition to the ten "Panthers" equipped with FG 1250, this company of the 101-th tank regiment received three Sd armored personnel carriers. Kfz. 251 / 20 with 600-mm infrared illuminators. 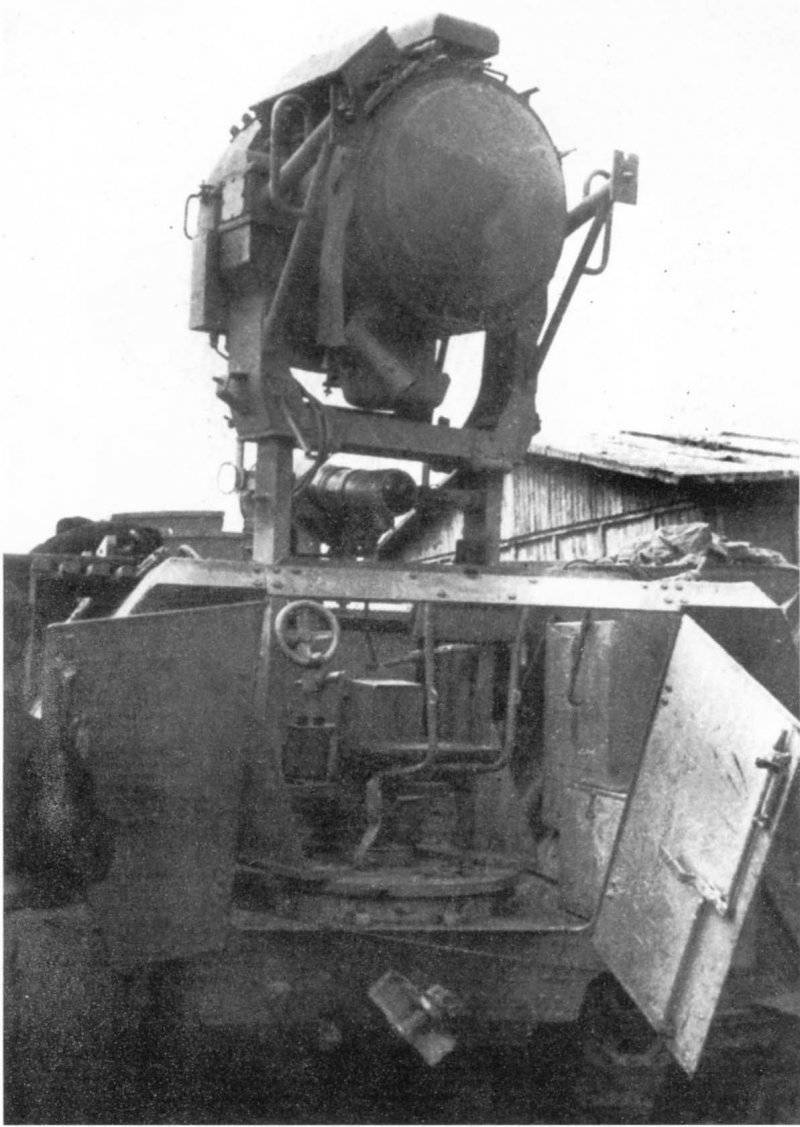 Information about the combat use of "panther" with infrared equipment is extremely stingy and contradictory. There is a brief report by Major Velwarth from the Fuhrer's Grenadiers division of 25 March 1945 of the year in which he reports on the first bout with the use of infrared devices. But there are no details in the report, it says only that the battle was successful, and the equipment turned out to be quite reliable in operation.

Some sources cite a reference to the memoirs of one of the veterans of the 1-th SS Panzer Division, who reports that "perhaps several" panthers "of the 116-Tank Division with infrared devices participated in the German attack in the Ardennes." True, there is no documentary evidence of the dispatch of such tanks to the 116 division.

There are also references to the fact that in April 1945 of the year two “panthers” with infrared instruments from the Clausewitz tank division destroyed a platoon of British comets near the city of Uelzen, and two anti-tank guns were shot on April 21 on April 1 in 2. This information raises strong doubts, since there is no evidence of the “panther” with infrared equipment being received by the Clausewitz division. In addition, according to other data, in April 21, the guns were indeed destroyed, but by the usual "panthers".

Some sources mention another option to equip the "Panther" with infrared devices. It is also known as the “version B” and included three sets of equipment (for the driver, gunner and commander) mounted on the Ausf Panther. D or Ausf. A. Sometimes even given
a photograph of such a machine, allegedly captured on the Western Front, and also mentioning military episodes involving “panthers” with the “option B”. However, more recent studies have shown that this option of installing infrared equipment did not exist, and the photo presented is a fake.

As for the Sd. Kfz. 251 / 20 “Falke” with 600-mm infrared illuminators, then in the autumn of 1944, an order was issued for the production of a batch of 600 such machines. However, according to the data of the German researcher V. Shpilberger, only about 60 Sd were manufactured by the end of the war. Kfz. 251 / 20. And besides the 60-centimeter searchlight, they were equipped with another night-vision device installed by the driver. Also, judging by the photos, on some Sd. Kfz. 251 / 20 night vision device was installed on the machine gun. 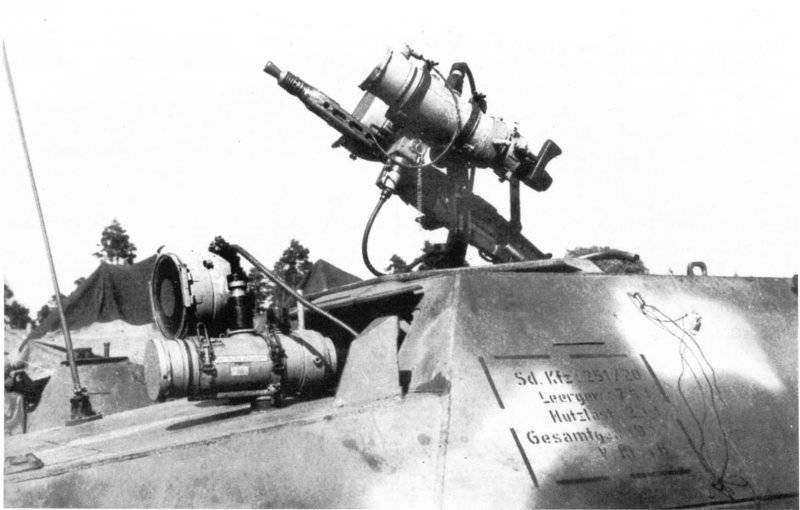 Armored Sd. Kfz. 251 / 20, close-up (the same machine is shown in the next photo on the right). The sign on the board is clearly visible, as well as the infrared instruments on the machine gun and the driver, and they are the same in design (SZ) 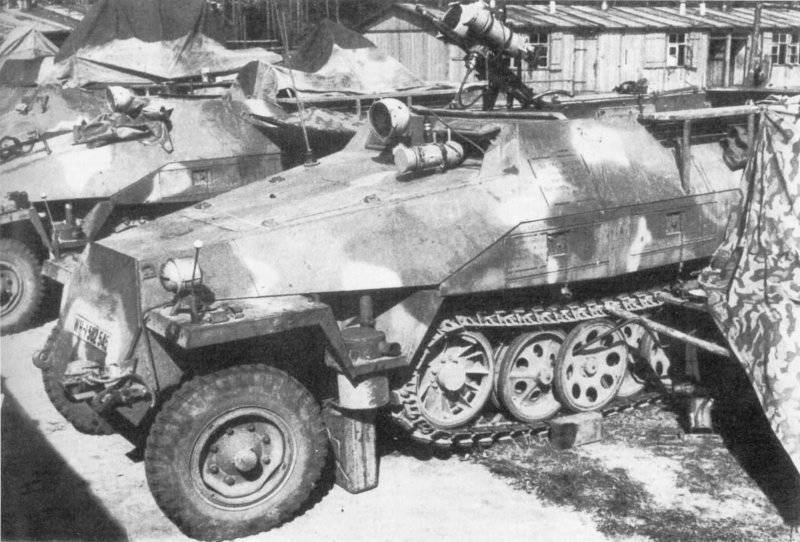 Armored personnel carriers Sd. Kfz. 251 / 20 "Falke", captured by the Allied forces. Spring 1945 of the year. Probably, the machines were in some kind of training center. Please note that there is no 600-mm searchlight on the right armored personnel carrier, but infrared devices are installed at the driver and on the MS 42 (NW) machine gun