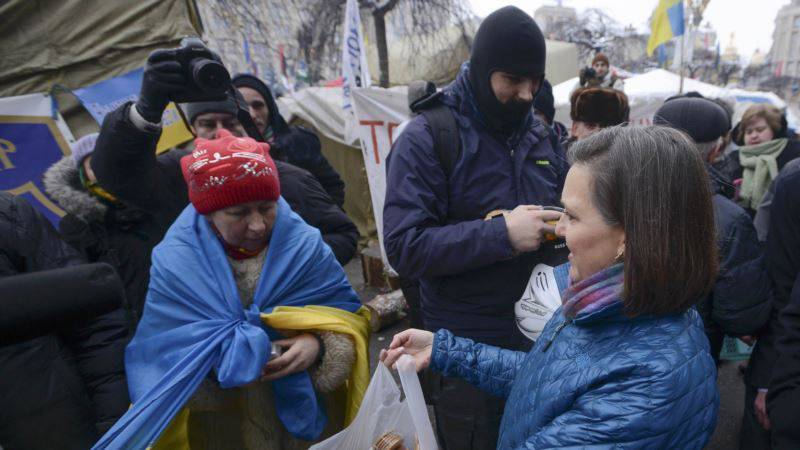 The US Deputy Secretary of State V.Nuland visited Ukraine with humanitarian aid (a package of cookies) and political pressure on President Yanukovych, with whom she had a "tough but realistic conversation." And it seems to be unsuccessful: in order to save the “European future”, the president must “demonstrate the will of the leader”.

She also met with three well-known leaders of Euromaidan, but only one of them - Oleg Tyagnybok, the leader of the radical Nazi party "Freedom", Victoria Nuland is still embarrassed. Although it is not clear why: their meeting is not at all accidental, but, one can say, deeply symbolic.

In fact, they are a “sweet couple,” because the US State Department always and everywhere supports extreme radical forces, from Libya, Egypt and Syria to, now, Ukraine. They have long been in the same boat! If earlier it was all sorts of radical radical nationalists, fundamentalists, in Ukraine just the Nazis. So Nuland sunk to Pyagnybok.

The objective pro-European press dryly says that radicalization occurs in Ukraine, and does not notice the great merits of the neo-fascist party Svoboda, which is the fighting force of not only the European, but also the red-black Bandera Euromaidan. But we, deep down, know that the core of the Maidan, supposedly uncontrollable, is largely made up by the militants of the Pygnybok, and Klitschko and Yatsenyuk - the political setting, extras and money, and a show for Western journalists.

What kind of "youth" is exorcism on the streets of Kiev with complete impunity? Unidentified persons with “Freedom” logos on their jackets destroyed a monument to Lenin - who could it be? It is grinning: he does not know! And as if everyone does not know, and Nuland does not know either: what, has she lost touch with the NSA?

Of course, these political forces are not cooperating directly: everyone hopes to use each other "in the dark": Nuland - Pyagnybok, Pyagnybok - Klitschko, Klitschko - Pyagnyboka with Yatsenyuk to the bargain. It is interesting to watch this round dance, but somehow it is not funny.

The West is increasingly vlyapyvayutsya in Ukraine, according to the most "can not", proving visually, figuratively, that Euromaidan is the work of the European Union and the United States. Walks Western diplomats in Kiev Maidan expose them truly idiots. Nuland - with cookies, others - with gloves. Foreign Minister Homo-Gay Foreign Minister Guido Westerwelle, accompanied by opposition leaders, said bluntly: "Ukraine must be on board Europe." And who will she be aboard this yacht? Even our liberal Dmitry Medvedev could not stand it: this is wildness!

No, there are, of course, in the West and honest people! “The State Department is provoking an increase in tension on the streets of Kiev,” says Professor Stephen Cohen fearlessly. US senator Jeffries, close to Obama, remarked that "the Nazi Freedom party is spoiling the image of Ukraine." They know the situation in the western capitals, but not to the end. Not only Ukraine is spoiled by the image of Freedom, but already by the United States, and the fault is Victoria Nuland.

Diplomatic hysteria, sir! God, before you punish, they say, deprives the mind! They expose themselves to ridicule themselves, and soon the whole world will laugh at them - that's when it will definitely reach President Obama with whom Nuland is walking with him. In addition, diplomats humiliate Ukrainians with their biscuit-gloves.

Let’s assume that the Nuland cookie will work in an insider way, and the Euro-Association of Ukraine will happen, what will happen after that, in about six months? When the Ukrainian economy begins to crack at the seams from contact with Europe: the industrial complex of the South-East of Ukraine expects a European integration collapse, Ukrainian experts say, in particular Rostislav Ischenko, president of the Ukrainian center for system analysis and forecasting, with “the prospect of hungry riots in six months.”

Then the main European integration events will unfold. They need, for every fire case, to prepare, and not only Ukraine. In the Baltic States, Bulgaria and even Poland, which had previously joined the European Union, nowhere was such a huge industrial complex as there is in South-Eastern Ukraine. In fact, it is a mini-USSR. Therefore, the scale of the problems, social disasters will be much higher. Then the Maidan different colors bloom throughout Ukraine. What will be the reaction of the United States, we can assume now.

Already, the US State Department’s voice raises threateningly: “If the requirements of Euromaidan are not taken into account ...”, and US Defense Secretary Hagel strongly recommends not to use force against tyagnybokovtsev ... the Minister of Defense of Ukraine. It seems that the democracy of “exceptional good”, disguised by Nuland's cookies, is preparing to plunge its teeth into Ukraine. Euromaidan American cookies ate, what would Yanukovych say to this? He goes to consult with Putin. Yanukovych, of course, the eagle: how he flew over Vilnius! But not yet Putin.

The indiscriminateness in the US means that they are trying to launch the Yugoslav scenario in Ukraine, their favorite “controlled chaos”. His minimum task is to destroy the industry of the South-East of Ukraine, which still interacts with Russia, according to the old cooperative ties. Under normal, good-neighborly conditions, Russia could place up to 10% of its defense state order in Ukraine, Rogozin said recently. This is a huge amount of money for Ukraine, and Russia's help in fulfilling the defense order.

This deal is trying to disrupt the United States with the help of the mythical "European integration" of Ukraine, which boils down, in fact, to the introduction of new regulations that destroy its industry, and thus exploding the country. What is Washington thinking about? If Putin did not let them blow up Syria, then will Ukraine really allow it?

And what, by the way, is Putin doing? “Moscow behaves surprisingly calmly,” writes the Christian Science Monitor, USA. Putin once again repeated recently: "Whatever the choice of Ukraine ..." So, one cannot help remembering Pushkin: "In heaven, sitting in a despondent sweet / forgetting the whole world, he didn’t rule anything / And without him everything went in its own order."

The next squadron of Russian fighters took over combat duty in Belarus, the aircraft carrier Admiral Kuznetsov left Murmansk and set off on a long voyage. Where?

Ctrl Enter
Noticed oshЫbku Highlight text and press. Ctrl + Enter
We are
Morocco: political stability and religious fundamentalists in the “pearl of the Maghreb”Attack in Jakarta. Indonesia is next target for terrorists
129 comments
Information
Dear reader, to leave comments on the publication, you must to register.