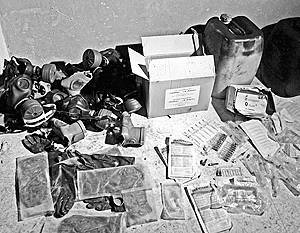 UN chemical weapons inspectors concluded that hand-made chemical munitions were used in Syria. They presented their final report on Friday to the UN Secretary General. As the Russian permanent representative to the UN, Vitaly Churkin, said, the report confirms the guilt of militants in chemical attacks, which almost became a pretext for intervention in this Arab republic.


On Friday, the head of the expert group, Swedish professor Oka Selstrom, personally handed over to the UN Secretary General Ban Ki-moon a report that summarizes all the data on where chemical weapons were used on Syrian territory. As stated in the final report of the UN Office for Disarmament Affairs, published on the organization’s website, the chemical weapon applied in five of the seven cases studied.

Recall that the first report of the UN inspectors was published in mid-September. It concerned only the 21 incident of August in the Guta oasis in the suburbs of Damascus. After the tragedy, the United States said that as a result of himataks, more than 1,4 thousand people died. Responsibility for the deed of the United States and several other countries placed on the regime of President Bashar al-Assad. The Syrian authorities have repeatedly denied these allegations.

The original document reported the use of chemical weapons on a relatively large scale. Experts did not rule out that the head parts of the missiles could be both standard and handicraft production. Moreover, on some parts of the shells Cyrillic inscriptions were found.

A member of the expert and advisory council at the "PIR Center", a former high-ranking officer of the Ministry of Defense, Lieutenant-General of the Reserve Yevgeny Buzhinsky, then considered Cyrillic shells at the site of the gas attack to be fake.

“You know our position, and all this is absolutely clear provocation. What is Cyrillic? Does this mean that we supplied them with weapons, chemical munitions? ”- then Buzhinsky told the newspaper VIEW. He stressed that "Russia has never supplied any chemical weapons to Syria, this is definitely another provocation."

It follows from the new document that toxic substances were used not only in Guta 21 August, but also in Khan al-Asal 19 March, Sarakeb 29 April, Jobar 24 August and Ashrafia-Sakhnai 25 August. But the inspectors did not find sufficient evidence of the information about the chemical attacks in Sheikh Makhsud 13 of April and Bakhharia of 22 of August.

It turned out that in the cities of Sarakeb and Bakhkharia, as well as in the suburb of Damascus Jobar, self-made ammunition was used. In investigating the use of chemical weapons in Jobar, the Syrian authorities provided the UN mission with two used improvised ammunition found by the Syrian army 24 in August, as well as two metal containers found in the same place on August 25. However, the UN mission could not find independent confirmation of the information received, so it was unable to establish the origin of the containers and the place where they were used.

Regarding the design of improvised ammunition, it is said that they are made using manual electric welding, which does not meet industrial standards, but with thoroughness and quality, testifying to the high qualifications of the manufacturer. Containers with a capacity of about four liters were painted, did not have a coating and had signs of rust on the surface.

According to the UN, in three areas of Sarakeb in western Syria, “self-made ammunition” was dropped from a helicopter, as evidenced by a number of testimonies.

The report indicates that, according to information received by the UN, the toxic substance sarin was used along with tear gas. In Bakhharia, the military reported that a container fell from their position, which did not explode a few meters away, but blue smoke with a strong odor began to emit from it. After that, the nearest hospital received victims with respiratory symptoms and other complaints, including a burning sensation in the eyes and throat.

The report does not contain conclusions about who used chemical weapons, but it notes that as a result of such incidents both civilians and soldiers of the government army were injured. This, in particular, is confirmed by blood samples taken from them.

The conclusion about the use of chemical weapons in the suburb of Aleppo Khan al-Asal was made in absentia, because the inspectors did not visit the scene of the incident for security reasons. “An analysis of the information provided by the Syrian government, as well as the governments of France, the Russian Federation, the United Kingdom, the United States, indicates that chemical weapons were used in Khan el-Asal,” the report says.

The information provided by Khan el-Asal also included the findings of Syrian doctors, according to which people in the area, including civilians and soldiers of the Syrian army, were subjected to "mass intoxication with organophosphate." “There is no indication to other sources of poisoning,” the document stresses.

Ban Ki-moon noted that the inspectors performed the task assigned to them in a highly professional manner, despite the dangerous conditions. The Secretary General recalled that the use of chemical weapons is a gross violation of international law and called for vigilance and the complete elimination of all chemical weapons arsenals, not only in Syria.

Russian Deputy Foreign Minister Gennady Gatilov, quoted by RIA "News"Recalled that Russia had previously conducted its investigation into the use of chemical weapons in Syria. “Our experts also do not confirm that this was done by government forces. There is a lot of evidence that such a chimataka could have been committed by the opposition, ”he said.

Back in July, Russia submitted a 100-page report on the results of the inspection in Khan al-Asal to the secretariat of the world organization. The document was published in early September. Analyzes of samples taken shortly after the incident confirmed the use of sarin, a neuroparalytic gas, in this area. Russian experts also found that many shells were manufactured in an artisanal way, which could indicate the use of chemical weapons by the opposition, and not by the government army.

Gatilov also recalled that last week an article was published by the American journalist Seymour Hersh, which tells about the incident with the use of sarin in August near Damascus.

“In his journalistic investigation, the question is being raised that this could be done not by government troops, but by the opposition. Therefore, such evidence, and it is not one, suggests that the opposition had the opportunity and committed these actions, ”the diplomat said.

In turn, Russia's permanent representative to the UN, Vitaly Churkin, said that the new report reinforces Russia's conviction that there are insurgents behind himataks in Aleppo and the outskirts of Damascus.

“What is written in the current report doesn’t change at all, and maybe it only supports our conviction that militants are behind the use of chemical weapons in Syria, and not the Syrian government at all,” the diplomat told Russia-24. According to Churkin, Moscow is going to prove it, however, “of course, it’s hard to expect our western partners to agree with us, since in this case we don’t have to expect objectivity from them that both in Aleppo and in Guta in the vicinity of Damascus 21 August chemical weapons were used by the opposition. "

We add that the plan for the destruction of the Syrian chemical arsenals is now being implemented. By February 5, all materials for the manufacture of chemical weapons, except isopropanol, should be removed from the country, and the most dangerous - this month. Objects associated with the Syrian chemical arsenals will be successively destroyed from December 15 to March 15. The chemicals are supposed to be destroyed on board a specially equipped ship that the US is ready to provide.