MiG-31 crashed due to engine failure 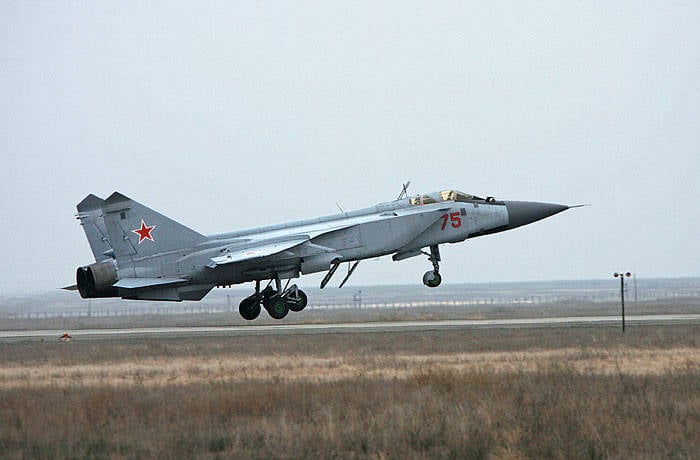 A plane of the Ministry of Defense of Russia - the MiG-31 fighter crashed near Vladivostok. The pilots ejected, the special commission launched an investigation into this incident. According to preliminary data, the cause of the fall of the fighter was the failure of one of the engines.

The plane of the Ministry of Defense of the Russian Federation MiG-31 crashed near Vladivostok near the village Olenevod of the Nadezhda district of Primorye.

As a source in power structures told Interfax, on Saturday morning, the MiG-31 interceptor fighter flew out of the 3022 aircraft repair factory in Primorye. According to preliminary data, the aircraft performed a test flight. The pilots ejected. There is no destruction on earth. According to the source, the plane was distilled from under Ussuriysk from the 3022 Aircraft Repair Plant to the Central Corner airfield of the air force of the Russian Air Force.

According to the source, in 5: 08 MSK the plane took off, in 5: 22 MSK disappeared from the radar, in 5: 46 MSK the pilots themselves reported that the plane fell, they ejected.

According to the authorities of the Nadezhda region, local residents helped the pilots. The plane did not catch fire, the military arrive at the scene of the accident for trial.

In turn, the prosecutor's office of the Pacific fleet began verification in connection with this incident.

The Russian Defense Ministry confirmed the fact of the fall of the MiG-31. “This happened with the aircraft, which was located at one of the aircraft factories,” the department’s press service and information department told Interfax-AVN.

According to the agency interlocutor, the MiG-31 was flying and in the 30 minute fell for unknown reasons. The crew managed to eject, and after 10 minutes it was discovered by the search and rescue services. "The pilots underwent medical examination, their health is normal," he said.

As the Department of the Press Service of the Defense Ministry told Interfax-AVN, the fighter flew without ammunition. “Today at 05: 31 Moscow time, the MiG-31 aircraft, which underwent a scheduled repair at an aircraft factory in the town of Vozdvizhenka, Primorye Territory, crashed during a test flight. The plane performed a flight without ammunition,” the department said.

The interlocutor of the agency also clarified that the MiG-31 fell on the slope of the hill, there are no victims and destruction on the ground. “To find out the causes of the accident, the commission of the 3022 plant of Aviaremont OJSC, where the plane was undergoing repairs, left for the place where the plane fell,” he said.

Later, the press service of the Ministry of Defense told Interfax that, according to preliminary data, the failure of one of the engines was the cause of the fall of the fighter. "The MiG-31 aircraft carried out a planned test flight after repair. The plane was piloted by experienced test pilots who had 2 hours of flight, in thousands of hours," the department said.

The Defense Ministry said: "During the flight, one of the engines failed. The crew brought the plane to a safe area and ejected." "The catapulted pilots were taken for examination at the military hospital of Vladivostok. Nothing threatens their health," the agency’s interlocutor added.

Meanwhile, according to the RF IC, a criminal investigation has been initiated by the military investigative department of the Investigative Committee of Russia on the Vladivostok garrison upon the crash of MiG-31. On the website of the ministry it is clarified that the case was initiated on the grounds of a crime under Article 351 of the Criminal Code of the Russian Federation (violation of the rules of flights or preparation for them).

According to the committee, at present, documentation relating to the repair of the aircraft, as well as its preparation for the first test flight, is being withdrawn from the aircraft repair enterprise.

The aircraft was found in the area of ​​the village Olenevod Freedom-Nadezhdinsky district of Primorsky Krai. According to preliminary estimates, it is not recoverable.

Ctrl Enter
Noticed oshЫbku Highlight text and press. Ctrl + Enter
We are
Weekly summary (9-15 of January) on the military and social situation in the DPR from the military officer "Mag"The accidents of military aircraft in Russia over the past 10 years
46 comments
Information
Dear reader, to leave comments on the publication, you must to register.