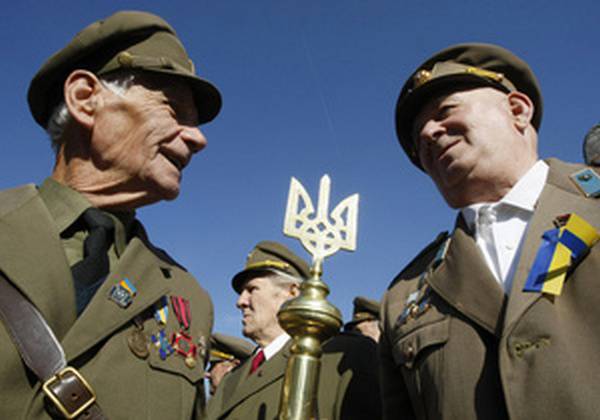 I have one question that does not allow me to live in peace. Why in the morning 6 loudly all over the country doesn’t sound the favorite song of “puppies”, due to a misunderstanding called Ukraine’s anthem, and after it the announcer doesn’t say Levitan’s voice: “There is no god but Bandera and the Prophet on the Earth”? Judging by the events that took place in Kiev, it is already time.

This question does not give me peace, because I do not know who to ask him. The fact of the revival of fascism in Ukraine no longer requires any evidence, if only because that MP Pan Mikhalchysh shouted loudly at the celebration of the UPA day in Lviv: “Death to anti-fascists”. These cries recorded and published all the media covering this Sabbath. The words of another deputy on one of the talk shows that IN Freedom - an anti-fascist, anti-Nazi party, can be considered a direct mockery of the consciousness of the people of Ukraine.

What do these outcasts celebrate? UPA Day? And what is the UPA? According to the nationalists, this is a heroic Ukrainian insurgent army. What is the army? The army is an institution of the state. Let's try to figure out which state represented the UPA.

The nonsense that the 30 July 1941 in Lviv, one of the Bandera white-hill maidens, proclaimed a declaration on the creation of the state of Ukraine, does not hold water. The state must be within certain limits. The state, in addition to the flag, anthem and coat of arms, it turns out, must also have a budget, due to which it, the state, provides its livelihoods. Well, and a lot of other things, which we will not talk about so far. And most importantly, it, the state, should be recognized by the world community, which at that time was the League of Nations. Nothing like the "state of Ukraine" at that time was not observed. Moreover, the “Shnevmerlik” never give full text of this very declaration. Why? Because there is one interesting phrase that sounds like this: Ukraine, hand in hand with Germany, led by the great Fuhrer Adolf Hitler, will carry the light of freedom to other countries of the world. Nehilo, right?

In consequence of the above, the question arises: who contained the so-called UPA, and from whose budget was it financed? The form they wore was, according to them, Austro-Hungarian, of the First World War. Maybe so, but Germany provided this form from its warehouses. Weapon - also. And she provided them with money. Moreover, retreating under the onslaught of the Red Army, the Germans left an enormous amount of weapons and ammunition to the UPA, which allowed them to engage in banditry right up to the beginning of the 50-s. So whose army was it? That's right, German. Because, as they say in Odessa, whoever is having dinner for a girl, he dances with her.

The baseless claims of UPA apologists that they fought against Germany and the USSR are not confirmed by anything. Moreover, the Bundeswehr archives officially publicly stated that the losses of the German troops from the UPA fighting were not found. But the Germans are a meticulous people, they are able to count, and accounting for them is paramount. Ordnung because. But the losses of the Red Army in manpower and technology are recorded, and there are numbers. They were published more than once, everyone can get acquainted with them. I, frankly, these numbers are not impressed. People say about such a result: a swing ruble, and a blow ... well, you know what. That is, the UPA fought only with the Red Army on the side of Nazi Germany.

“Heroism” they, of course, also showed. But mainly in the fight against the civilian population - with women, old people, small children. "Heroically" killed the chairmen of collective farms and village councils, teachers, doctors, as well as all who objected to their bestial essence. And these facts are also documented, confirmed by photographs. 15 years ago, the heroism of the UPA warriors preferred to keep quiet because there were a lot of witnesses to their atrocities. Over time, the witnesses began to die, and those few old people who still live, are afraid that, if they speak, the “heroic” grandchildren of those Bandera who killed their parents will come to them. With the regular units of the Red Army, invincible and legendary, the “heroic” UPA fighters did not engage in open battle — they preferred to shoot in the back. And the current bawlers from the UPA can not give a single example, well, at least some victory over the Red Army in the absence of such.

They, the followers of Bandera, are so stupid that they are not able to erect a normal monument to their god. Look closely at the monuments to Stepan Bandera, and you will be surprised to find the torso from the demolished monuments to Lenin, to which the blunt, brainless head of Bandera is attached. Nonsense. The Red Army raped their "glorious and heroic" army into a small hole for an enema, as she wanted, and this is a fact. You can shout "Glory to the heroes" and "Fat to the heroes", but the fact remains: there was no heroic UPA, but there was the usual bandit formation created by the insane Bandera and Shukhevych, the beast, which "the main beekeeper of Ukraine", the son of the same Bandera elevated to the rank of national heroes.

Such, if I may say so, "warrior heroes" are called the same way all over the world - war criminals. The French gave them the name of collaborators. There they were treated as follows. Women collaborators - mostly those who lived together with the Nazis - were stripped naked, dug in feathers and sent for a walk along the streets of the city of Paris on foot. They also acted humanely with the men - they smeared green on their foreheads so that the bullet would not carry the infection. Not spared anyone. The world famous Coco Chanel managed to escape to England and sat there quietly until the British government agreed with the French. Marshal Petain, head of the French government under the Germans, the national hero of France, the winner of the Battle of Verdun, was sentenced to death, public contempt and confiscation of property, despite 90-year-olds and great services to France in the past. And they would have slapped if de Gaulle had not replaced the death penalty with a life sentence. And rightly so, this is a serious lesson for the future for the rest.

And we have? Yaroslav Stetsko, the same head of the operetta government, did not suffer any punishment, having successfully died in emigration in extreme old age. All the other bandos caught in caches with weapons in their hands, successfully served 10-25 years, depending on the severity of the offense, and returned to peaceful life. Moreover, not everyone returned to their native lands, knowing that there was a “warm” reception awaiting them from the relatives of the people who were tortured by them. Those who came to confess, did not suffer any punishment. They all survived to a great old age, despite the "atrocities of the NKVD."

Moreover, the last UPA commander, well-known coronet general V. Cook served only ten, after which he graduated historical Faculty of the University, defended his Ph.D. and worked in the State Historical Archive. This despite the fact that the historical and philosophical faculties were tightly controlled by the CPSU. So, Cook shamefully surrendered his entire UPA along with warriors and caches, thus buying himself life and further prosperity. Good commander, nothing to say!

One thing pleases: Stepan Bandera got what he deserved - though, it’s a pity, not in the form in which it should have been done. Well, okay - dog and death of a dog. And it is in this “rotten liberalism” of the Soviet power and the flaw in the NKVD that lies one of the main reasons for the resuscitation of nationalism. Not finished off, not burned with a hot iron - now we are reaping the benefits. Neophytes of nationalism - they are uneducated people. Their cerebellum (diminutive of the word brain) is unable to perceive any theories. The works of Dontsov, Mikhnovsky, Sciborsky are empty words for them, Chinese writing. They do not distinguish between the concepts of "nation" and "nationality", "nationalism" and "national pride". The main thing is that they have the opportunity to throw out their bestial, hooligan essence with impunity. For them, nationalism is an empty sound: the main thing is to smash, break, beat in the face, while not forgetting to put on a mask on your own face, no matter how much happened. The same "heroes", like their grandfathers.

The actions of the authorities in relation to these fascist thugs can be regarded in two ways. Either it is complete indifference to what is happening in the country, or, much worse, consciously heating up neo-fascism in order to strengthen the already existing split of the country, which makes it possible to last longer at the trough. Indeed, in any other country so beloved by them, Europa would have stopped such an event in the simplest and most straightforward way - they would have driven the fire tanks and washed away all this shit from the street. And we instead went to storm the apartment, from which the song "Holy War" sounded. A shame! They naturally trampled down the bright memory of their own fathers and grandfathers, who freed the world from the brown plague.

Yes, I must admit that the UPA participated in the Second World War. On the side of the enemy, Hitler's Germany, and no matter what goals she pursued. And let the benefits and privileges of these scum receive from the hands of Angela Merkel. And in gratitude, they lick these hands by their inborn habit soaked with mother’s milk to lick something of the powerful. And the city and regional budgets of those cities where these freaks are paid extra pensions, will be deprived of subventions from the state budget. We can not allow the state to establish rules for life followers of the monsters of the human race. And we can not allow the streets of our cities, watered with the blood of our grandfathers and fathers, who liberated the land from the fascist scum, marched individuals whose grandfathers helped the fascists shed our blood. Otherwise, it will be a violation of the memory of the millions of people who laid their lives on the altar of the Fatherland in the fight against the fascist contagion, protecting humanity from it.

I urge all sensible people to defend our future against the encroachments of the social-nationalists, and, quite simply, neo-Nazis. Down with Freedom IN from the political arena of Ukraine.

Ctrl Enter
Noticed oshЫbku Highlight text and press. Ctrl + Enter
We are
About Stalin and KhrushchevWhat you didn't want to know about England
110 comments
Information
Dear reader, to leave comments on the publication, you must to register.