December 16 2013
92
After the actual collapse of the higher military education system, which was carried out during the sensational reform, called “Serdyukovskaya”, the state seems to have decided to turn in the opposite direction and again begin to build the military educational system in the previous version.


The head of the defense ministry, Sergei Shoigu, said that the branch system (namely, such a system was actively promoted by his predecessor at the ministerial post) does not allow solving strategically important tasks. According to Shoigu, the branch system reduces the efficiency of management in military universities for the simple reason that any important decision needs to be coordinated with the so-called head university. If the head institution of higher education is located in one and a half thousand kilometers (or even more) from a branch, then not only the time required for making a decision is increased, but also the amount of money spent on it. In other words, they wanted the best, it turned out again as always: they wanted to save money by optimizing the number of military schools, but in the end, no savings came out. Not only were there problems with savings, but there was also a real threat of the inability of the university leadership to respond promptly to the challenges of wartime. God forbid, of course, the arrival of such a time for Russia, but for that there are military universities and the Ministry of Defense itself, so that the possibility of such times for the country to keep in mind and be ready for security threats. The Minister of Defense also paid special attention to this.

It should be recalled that the main emphasis of the military education reform (for convenience, we will also call it “Serdyukovskaya”, although it is clear that not only Anatoly Serdyukov applied his bright head to it ...) came down to what was needed in the shortest possible time from the existing Russian military schools (and there were more than 6 dozens of them at the time of the beginning of the reform) to create so-called VUNCs (military educational and scientific centers). And such VUNTSEV needed to make exactly 10 pieces with all the ensuing consequences. The main consequence is a large-scale reduction of qualified military teachers, many of whom have scientific degrees, as well as the actual reduction to zero of the plan to recruit cadets for training in these same VUNCs. It was announced that the number of officers in our army, it turns out, is too much, and therefore they decided to wait with the recruitment of cadets for the newly-formed VUNC ... We’re saying that when officers are required, we’ll announce recruitment for a number of military specialties. save ... In which direction these funds were “saved” is a big question. As a question, and why, suddenly, in the Russian army, during the reform, young officers turned out to be unclaimed? Apparently, someone decided that the circle of Russia exclusively friends ... Well, this someone, maybe even friends ...

Already after the completion of the first stage of the “Serdyukov” reform of military education, it turned out that all these perturbations lead to the actual collapse of the system that has been forming for decades. Not to modernization, not to optimization, but to the collapse. Many military universities have lost excellent teachers, who simply could not leave their hometowns and move hundreds of kilometers to other localities to work in those same VUNCs. Yes, in these VUNTSakh, they were, to put it mildly, not all and far from always happy ... But the previous leadership of the Ministry of Defense (I want to believe that the leadership of the country as a whole) didn’t care about all these facts: they don’t want it as you want - a holy place empty does not happen, but because we take the other. But not everything was so simple. “Others” still needed to be found and attracted. Looking for a painfully long time, but in the end it turned out that in many military specialties of “other” qualified military teachers in our country today simply do not exist. Well, it’s good that at least they didn’t think of attracting foreign specialists to train Russian military personnel, and then, guided by the rest of the reform, it would not be surprising if the Defense Ministry “ordered” a couple of dozen military “consultants” from the Pentagon or the Bundeswehr ...

Now, Sergei Shoigu seems to be taken for the restoration of the system torn by his predecessor. The Minister of Defense makes a proposal to restore the classical system of military education in Russia, in which military schools, universities and academies should reappear. The recruitment to the military universities that remained afloat was restored (this year the enrollment amounted to more than 15 thousands of cadets).

In addition, most of these military universities will have to get their own historical names that have been taken away from them for some strange reason.

One of such military schools of Russia, deprived of their historical name, is the legendary Borisoglebsky Military School named after V.P. Chkalov. This year, this educational institution (well, or rather what was left of it) marks its 90 anniversary (the report was published 1 July 2013 of the year on the website "Military Review"). For decades, the school has produced military pilots and engineers. Graduates include Valery Chkalov, cosmonaut Oleg Novitsky, current Air Force Commander Viktor Bondarev, one of the first Heroes of the Soviet Union Nikolai Kamanin, test pilot Hero of Russia Sergei Bogdan, test pilot twice Hero of the Soviet Union Vladimir Kokkinaki and a whole galaxy of other famous pilots and warlords.

Today, the military university has been turned into a flight base, the state of which has only recently begun to improve. Prior to that, for almost a couple of decades, the school, deprived of both its historical name and the actual status of the military school, had declined and was a depressing sight. People who at one time graduated from this renowned military university declare that they had tears in their eyes from what they saw before them, coming to Borisoglebsk to participate in the celebration of the anniversary of the university (detailed material on the state of the former BVVAUL on the "Military Review" was published last November).

It was Borisoglebsky airbase that was recently visited by Defense Minister Sergei Shoigu, saying that the integration of the airbases held earlier does not meet the requirements of state security and is not able to respond to possible threats.
In this regard, the Minister noted that after the inspection, both the structure and the deployment of the Air Force will be changed. During his visit to Borisoglebsk, Shoigu met with the military personnel of the flight base, and also inspected the new Yak-130 aircraft that arrived at the base as part of the implementation of the state defense order. In addition, the Minister of Defense examined the transport An-140-100, which was produced by the Voronezh Aviation Construction Association. 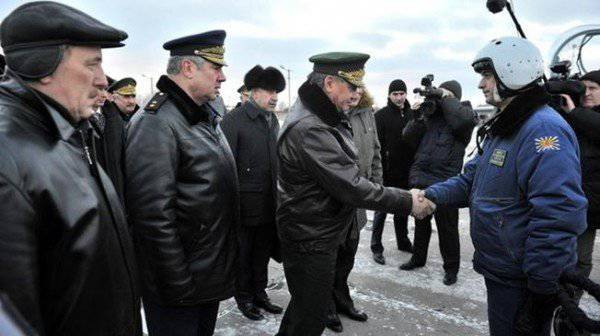 In this regard, the statement of the former Air Force Commander-in-Chief Pyotr Deinekin, who visited Borisoglebsk at the ceremony of transferring new military aircraft to a flight training base, is noteworthy. In particular, he said that he was glad that new equipment arrived at flight training centers, but noted that he was depressed by the acute shortage of flight personnel in all types aviation Russia (both in civil and military).

Unfortunately, as a result of previous reforms, we have sunk into a state where the arrival of new aviation technology is ahead of the training of flight personnel, ”says Peter Deinekin.
Indeed, “thanks to” the reform (if these words are generally appropriate here) there was a situation in which there is a technique, but there are not enough people capable of this technique (first of all, new models) at the proper level to manage. There are not enough professionals not only in the structure of the Air Force, but also in other types and types of troops.

In this regard, decisions to restore military education in an effective form are clearly overdue. Here you need to pay attention to the words of Vladimir Putin, which he said during his appeal to the Federal Assembly. The president said that university students should be given the opportunity to receive a military specialty during training and passing military training. This is a very interesting statement by the Supreme Commander, which, apparently, is pushing for the restoration of military departments in universities. If so, then it turns out that this is the departure of Defense Minister Sergei Ivanov from the “pre-school” reform, who criticized an excessively large number of universities with military departments for their inefficiency in 2008, and the number of military departments was reduced more than 3 times.

In general, I want to think that the new decisions of the authorities in terms of military education are thought out and supported by a reliable base. Because if this is not the case, then where are the guarantees that these undertakings through 3-5 will not be replayed for years? After all, the need for reforms is always presented here only as goodness, but only then, just like in football, either the implementation suffers, or the implementation goes, but only in its own gates ...

Ctrl Enter
Noticed oshЫbku Highlight text and press. Ctrl + Enter
We are
The tangles of military education reform: Serdyukov not, what's next?Sergei Shoigu demands to develop military education
92 comments
Information
Dear reader, to leave comments on the publication, you must to register.