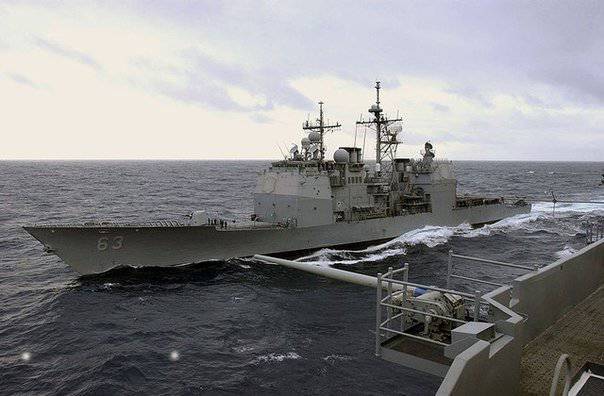 In the South China Sea, US and Chinese warships almost collided, Washington declared protest to Beijing, US media reported on Friday.

"Being legally in the South China Sea, (US cruiser)" Cowens "and one of the ships of the Navy of the People’s Liberation Army of China (PLA) agreed that in order to avoid a collision, maneuvering was needed," the American military sailor said, ITAR-TASS reports with reference to The Washington Free Beacon.

“This incident emphasizes the need to observe the highest professional standards at sea, including communications between ships, to minimize the risk of an accidental incident or emergency,” he added. According to the description of the publication, the US Navy missile cruiser "Cowens" went on the high seas near the new Chinese aircraft carrier "Liaoning".

From one of the Chinese escort ships he was ordered to stop, but the cruiser continued to move. Then the Chinese ship went to him intersect, and then stopped. In order to avoid a collision, “Copens” had to abruptly change course.

According to the American sailors, the maneuver was dangerous.

The State Department reported that the United States has filed a protest against China through diplomatic and military channels in both Washington and Beijing.

Recently, the US has been regularly making claims to China over the creation of a new identification air defense zone in the East China Sea. At the same time, the authorities in Washington do not recognize that they are in fact pursuing a policy of "deterring" China.
Earlier, South Korea announced the expansion of its air defense zone. It will cover the islands south of the Korean Peninsula. Experts warn: this will increase the degree of tension in the region, since some of the islands in question are also controlled by China.

December 6 South Korean President Park Geun-hye informed US Vice President Joe Biden at a bilateral meeting on Seoul's plans.
Japan declared its readiness to defend its borders, the United States condemned the decision of the PRC, calling it "too radical." The United States called on China not to support the air defense zone and refused to recognize it.

US airlines said they would notify China about flights in the air defense zone, as requested by the PRC. Korea and Japan have ordered their airlines to ignore the new rules.

On November 28, the Japanese and South Korean airplanes had already crossed the air defense zone without warning, without meeting any reaction from the PRC.

Ctrl Enter
Noticed oshЫbku Highlight text and press. Ctrl + Enter
We are
The Washington Free Beacon: China has tested a new ICBM on a railroad carNew photos of the Chinese fighter Chengdu J-20
83 comments
Information
Dear reader, to leave comments on the publication, you must to register.