Rocket troops of Bulgaria. Part I. Formation and Sunrise

December 16 2013
21
31 August 1958, the United States launched the first Thor ballistic missiles against the USSR in the UK. After put on alert the rocket "Jupiter" and made plans to place them not only in the UK, but also in France. The gap with de Gaulle prevented the implementation of these plans, but the Yankees were not at all taken aback. At 1959, they placed their ballistic missiles in Italy and began to put pressure on the same topic on the Turkish government. N. S. Khrushchev's patience broke, and the allies of the USSR in the Warsaw Pact Organization (ATS, 1955-1991) were offered modern missile weapons. So in 1960 began история rocket troops of Bulgaria. 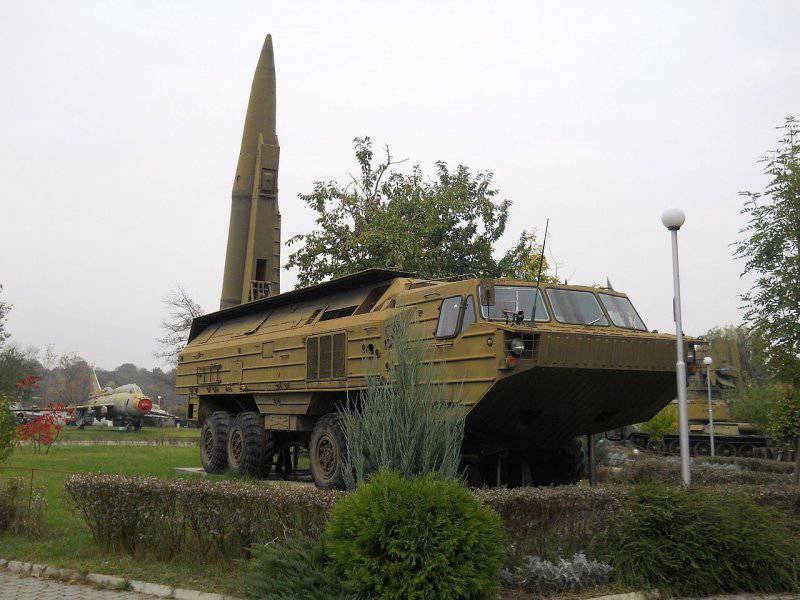 The General Staff of the Bulgarian People's Army (SUA) studied in detail the capabilities of the proposed missile and decided to equip the Army (SV) operational and tactical missile system (OTP) 8K11 with missiles R-11, tactical missile system (TR) 2K6 "Luna" with 3R9 missiles 3P10 and 3P11 and anti-tank missile systems (ATGM) 2-15 “Bumblebee”. The terms and training programs of Bulgarian officers in the USSR were agreed with the General Staff of the Soviet Army. The operators were trained at VOES in Leningrad, and the technicians at the All-Union School of Organization and Education of Sumi and VOATSH of Penza. In February-March 1962 Bulgarian officers from the control group of launch and technical positions conducted an internship in the rocket division of the SA in s. Bear, near Novgorod.

For the training of officers and sergeants of the rocket forces in Bulgaria in 1961 units were created in the departments of "Artillery" in the military academy "G. S. Rakovsky "in Sofia and in VNVAU" George Dimitrov "in the town of Shumen. In the town of Smolyan founded the Training Rocket Center (URC).

March 5 The 1961-based artillery regiment from the reserve of the High Command (RGC) in the town of Smolyan formed the first Bulgarian rocket unit - the 56-I missile brigade (RBB). She was armed with OTR 56K8 and was provided with 11-th mobile missile-technical base (PRTB).

In August, Soviet rocket men arrived in Bulgaria 1961: Gen.-Leith. G.S. Nadisev, regiment N. T. Kononenko and the regiment. I.I. Gamarnik. They provided invaluable assistance in the formation of the Bulgarian rocket forces and left warm human memories for all who worked with them. At the request of the gene. Nadisev from the missile brigade near Bender (Moldavian SSR) in Bulgaria came officers, sergeants and soldiers of the USSR under the command of the regiment. M. p. Chernishov. During the practical training of the personnel of the first three launch batteries (SBB) of the first missile battalion (RDN) of the 56-th RBD, each Bulgarian officer, sergeant and soldier stood in a Soviet equivalent in equivalent rank.

In the middle of August, 1962 from the Kostenets railway station left the railway train, which the command and headquarters of the 56 th RBD, 1 th RDN, technical battery, meteorological command, units and military equipment left. In 11 h 20 min 28 in August 1962 from the object "71 site" (Kapustin Yar test site in the Astrakhan region) the first combat training launch of a tactical missile in the history of the Bulgarian army took place. 1-i Sat shot at a distance of 120 km. The missile’s deviation from the target was 70 m in range and 50 m in azimuth. In accordance with the Training Course for 1962 (KP-62), the first shooting of the Bulgarian rocket engineers was rated “excellent”.

At the same time, as part of the 7-th motorized rifle division (MSD) of the 3-th Bulgarian Army (BA) in the city of Yambol, 66-I RBD and 130-I RTB were formed. After the return of the 56 th RBR in Bulgaria, it was reassigned to the 2 th BA and relocated in a. Marno, in the field where 129-I PRTB was created. In Samokov, the 128-I PRTB remained and the 46-I RBI was formed, which submitted to the 1-I BA.

By the end of 1962, each of the three Bulgarian armies had its own RBD, which included two MDRs with three SBs each. Each SBAT had two launchers (launchers). They were armed with OTR 8K11 with P-11 missiles. The launch aggregates of the 66-th RBR were tracked 8У218. The staffing of the Bulgarian BSR almost fully corresponded to the Soviet. Due to the initial shortage of weather stations PMC-1, each RDN had only one meteorological input. Full-fledged weather batteries were deployed only in 1964.

12 September 1964 year with. Telish was formed 76 th missile regiment (RP) RGC consisting of three SBAT and providing units, armed with the latest OTR 9K72 "Elbrus" with P-17 missiles. The 1975 9K72 with P-17 adopted and 66-I RBR. In 1981, the 76 RP was deployed in RBD. In 1986, 76-i RBB began rearmament on the 9K714 “Oka”, and by the end of 1990 she had 2 RPNs with 2 PBs to 2 PU 9P117 each. In 1962-1989 Bulgarian OTR conducted tactical exercises with combat training launches: 46-i RBR - 10; 56-i RBR - 11; 66-i RBR - 11; 76 th RP (RBR) - 6. Almost all launches were carried out at the Kapustin Yar range in the USSR, only two starts were made on the territory of Bulgaria. Bulgarian rocket engineers made friends with their Soviet colleagues from the 71 Site (42202 military unit) and always spoke of them with appreciation and sincere human warmth. Mid-level officers memorized the chief of staff of the regiment. Kalmykov, who met them and was responsible for the deployment of personnel and equipment. Generals write about the gen.-regiment. L.S. Sapkov. Without undue red tape, he supplied the Bulgarian generals with the best and most up-to-date materials about the combat training of the rocket forces. In addition, he rendered great assistance to Bulgarian rocket engineers with advice and considerations on combat work. In 80-x gene. Sapkov initiated the creation of the Friendship Park, where each RBD, which arrived at the exercises in Kapustin Yar, planted a tree from its edge. In 1984, the 76-I RBR also planted a tree and erected a small monument of Vratza limestone. It would be very interesting to find out if they have survived to this day?

In parallel with the deployment of RBR and ORDn in 1961-1963, PRTB was deployed in each of the three BAs. In contrast to the organization of launch units, here the Soviet experience turned out to be almost inapplicable. PTRB in Bulgaria deployed in the garrisons of dislocation RBR. The Central Rocket and Technology Base (MDG) was deployed at Karlovo at 1964, and relocated to Lovech at 1967. In the MDGs there was a separate park missile division, which was engaged in receiving, storing, dispersing, guarding and delivering ammunition and equipment to the RTG. A number of original and innovative technical developments were created at the MDCs, including: instrumentation for checking the parameters of the I-265 and I-266 Mk-4А11 devices on the 9Ф213 machine; a device for monitoring the voltage on the rocket body; 2X663 machine for transporting 9X241 and 9X258 products and many others.

The end of the first part.

The article is written on the book of the former commander of the rocket forces and artillery of the BNA, Lieutenant General Retired Dimitar Todorov “Rocket troops to Bulgaria”, ed. “Eur Group 2002”, Sofia, 2007, 453 p.

Ctrl Enter
Noticed oshЫbku Highlight text and press. Ctrl + Enter
We are
Bulgarian armored vehicles. Part of 3. Postwar period and modernityRocket troops of Bulgaria. Part II. Death by US strike
21 comment
Information
Dear reader, to leave comments on the publication, you must to register.