Ukraine after the Orange Revolution: Can the country complete the transformation of the army and join the fight against terrorism under the leadership of the United States? 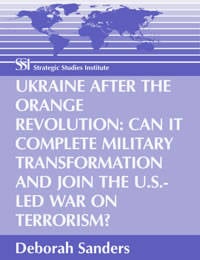 Ukraine: The US led war on terrorism?
In October, SSI (United States Institute for Strategic Studies) 2006, a research institution specializing in analyzing US geo-strategy and national security issues, publishes the work of British researcher Deborah Sanders, “Ukraine after the Orange Revolution: Can the Country Complete the Army Transformation and Join to fight terrorism under the leadership of the United States? "


Deborah Sanders, a senior lecturer in the Department of Defense Studies at the British Defense Academy, is considered an authoritative specialist who has been following the relations between Russia and Ukraine since the first day of independence. With 2001, Mr. Sanders pays special attention to the issue of reforming the Ministry of Defense and the special services of Ukraine, advises NATO on what specific defense cooperation programs can contribute to stabilizing Ukrainian-Russian relations. As the author of his doctoral thesis “The cooperation of Russia and Ukraine in the field of security in the post-Soviet era,” Sanders regularly visits Ukraine, receiving the necessary information first-hand. According to the author, Ukraine can participate in the global fight against terrorism in two ways.

First, as “an outpost of stability in the Eurasian region”, having “enough authority and confidence to carry out diplomatic and peacekeeping missions in frozen conflicts on the territory of the former USSR”.

“Ukraine can play a positive diplomatic and military role in the“ frozen conflicts ”, for example, in Transnistria, Abkhazia and Nagorno-Karabakh. We are talking about those conflicts where no longer force is used, and the conflict itself is completed, but its essence has not yet been resolved. If you do not deal with the resolution of such conflicts, the said territories may turn into incapable states and, accordingly, as a refuge for global terrorists. A democratic Ukraine with an effective and reformed army and intelligence service will be able to carry out important diplomatic and military missions in such conflicts on the territory of the former Soviet Union. ”

Secondly, Ukraine can be useful in a number of other situations, but for this it needs to develop its peacekeeping forces.

“Ukraine is a long-standing and active participant in peacekeeping operations. Its troops took part in missions in Eastern Slovenia, Macedonia, Angola, Abkhazia, Guatemala, Tajikistan and Lebanon. Ukraine has played an important role in peacekeeping operations conducted under the auspices of NATO in Bosnia-Herzegovina and Kosovo. Ukraine sent a chemical and biological defense unit to Kuwait during the first phase of the occupation of Iraq, and Ukrainian transport aviation provided air cargo and peacekeepers to Afghanistan. ”

The author sees in Ukraine a reliable ally of the United States in the fight against terrorism, but for this, Ukrainians will need a complete review and reform of their defense sector. According to Sanders, "Ukraine has already made significant progress in improving the professionalism of the army, establishing a democratic system of leadership in the defense sphere." But at the same time, “in the matter of reforming the special services, the progress of the country is much more modest”. According to Sanders, “the reform of the Ukrainian security service is a long overdue question.” The path is unequivocal - a revision of the principles of the work of the special services, the democratization of their activities, the arrival of new persons in leadership positions.

Somewhat skeptical, Dr. Sanders assesses the state of the Ukrainian peacekeeping forces, who are not yet ready for serious trials and independent work:

“Ukraine has made significant progress in building effective and professional peacekeeping forces. Nevertheless, today it is clear that Ukrainian peacekeepers do not receive sufficient practical training and do not have experience in conducting strategic or more complex peacekeeping missions. A detailed study of the activities of Ukrainian peacekeepers in Iraq suggests that these forces still lack experience and knowledge for something more than the simple performance of elementary (rather than complex or strategic) tasks facing peacekeepers. And the changed nature of modern military conflicts requires members of the international community to have contingents capable of simultaneously performing the entire spectrum of peacekeeping tasks, from restoring peace to maintaining it. ”

In other words, the defense sphere of Ukraine needs reforms, but, the author stresses, the success of the reform "depends on how Ukraine will be able to maintain good relations with its neighbors, and not least with Russia." And this, in her opinion, is extremely important:

The work of Dr. Sanders ends with a short list of recommendations to the US government for further work with Ukraine. In fact, an expert on Ukrainian-Russian relations gives two main tips, which, unfortunately, still remain unrealized (and, possibly, unvalued) in full:

- The government and the US Department of Defense should recognize and accept the unique nature of the process of reforming the defense sector of Ukraine, the complex interrelationships of external and internal factors. Based on this, the country needs to offer only those programs that contribute to the development of democracy and the defense sphere, and at the same time contribute to the establishment of good-neighborly relations with Russia.

- The United States and the entire international community should recognize the presence of unavoidable contradictions observed in Ukraine’s attempts to consolidate democracy. It is necessary to understand the current situation - a democratically stable Ukraine, capable of becoming a bulwark of stability in the region, will be much less willing to send peacekeeping contingents to participate in non-traditional peacekeeping operations, even under the auspices of the UN.

Ctrl Enter
Noticed oshЫbku Highlight text and press. Ctrl + Enter
We are
Islamization of Great Britain: Social and Political ConsequencesRussia: the Moon, Mars and further everywhere ... Speeches of the participants of the Izborsky club in the corporation "Rosobschemash"
160 comments
Information
Dear reader, to leave comments on the publication, you must to register.