As a newborn Ukraine in the XVII century, was looking for its place in Europe and what came of it 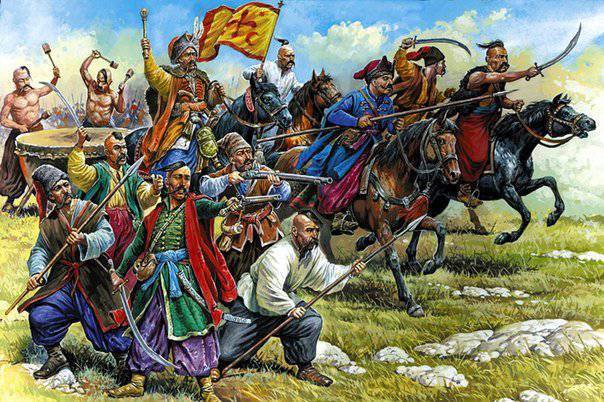 Ukraine in its stories more than once suffered the torment of political self-determination. In the middle of the XVII century, it, like today, rushed between the West and the East, constantly changing the vector of development. It would be nice to recall what this policy cost the state and the people of Ukraine. So, Ukraine, XVII century.

Why Khmelnitsky needed an alliance with Moscow?

In the 1648 year, Bogdan Khmelnitsky defeated Polish troops sent against him three times: under the Yellow Waters, under the Korsun and under the Pilas. As the war flared up and military victories became more and more significant, the final goal of the struggle also changed. He started the war by demanding limited Cossack autonomy in Naddniprovschina, Khmelnitsky had already fought for liberation of the entire Ukrainian people from Polish captivity, and the dream of creating an independent Ukrainian state in the liberated Poles from the territory did not seem unrealizable.

The defeat at Berestechko in 1651, Khmelnytsky bit sobered up. He realized that Ukraine was still weak, and alone could not resist in the war with Poland. Getman began to look for an ally, or rather, the patron. The choice of Moscow as an “elder brother” was not at all predetermined. Khmelnitsky, together with the foremen, seriously considered the options of becoming an ally of the Crimean Khan, a vassal of the Turkish Sultan, or returning to the Commonwealth as a confederative component of a common state. The choice, as we already know, was made in favor of the Moscow Tsar Alexei Mikhailovich.

Unlike the current situation, Moscow was not at all eager to lure Ukraine into its arms. To accept the citizenship of the Ukrainian separatists meant the automatic declaration of war of the Commonwealth. And Poland of the XVII century is a large by the standards of the European state, which included the vast territories that are now part of the Baltic republics, Belarus and Ukraine. Poland had an impact on European politics: it was not even 50 years that its members had taken Moscow and put their protege in the Kremlin on the throne.

And the Moscow kingdom of the 17th century is not the Russian Empire at the beginning of the 20th century. The Baltic states, Ukraine, the Caucasus, Central Asia are still foreign territories, and in the annexed Siberia the horse did not roll either. There are still people who remember the nightmare of the Time of Troubles, when the very existence of Russia as an independent state was at stake. In general, the war promised to be long, with an unclear outcome.

In addition, Moscow fought with Sweden for access to the Baltic Sea and relied on Poland as a future ally. In short, except for a headache, the adoption of Ukraine under his arm promised absolutely nothing to the Moscow Tsar. Khmelnitsky sent the first letter with a request to take Ukraine into citizenship to Tsar Alexei Mikhailovich in 1648, but for 6 years the king and the boyars refused all letters of the Ukrainian hetman. The Zemsky Sobor, convened in 1651 for decision-making, spoke, as they would say today, for the territorial integrity of the Polish state.

The situation is changing

After the victory at Berestechko, the Poles went to Ukraine by punitive expedition. On the side of the Polish crown were the Crimeans. The villages were burning, the Poles executed the participants of the recent battles, the Tatars were full for sale. In Ukraine, devastated starvation began. The Moscow Tsar abolished customs duties on grain exported to Ukraine, but this did not save the situation. The peasants who survived the Polish executions, the Tatar raids and the famine went in droves to Muscovy and Moldova. Volyn, Galicia, Bratslavshchina lost up to 40% of its population. Khmelnitsky ambassadors went again to Moscow with requests for help and protection.

Under the hand of the Moscow Tsar

In this situation, 1 in October 1653, the Zemsky Sobor took the fateful decision for Ukraine to accept her citizenship, and on October 23 declared war on Poland. By the end of 1655, by joint efforts, the whole of Ukraine and Galician Russia were liberated from the Poles (which the Galicians cannot forgive Russia to this day).

Taken under the sovereign’s hand, Ukraine was not occupied or simply annexed. The state maintained its administrative structure, its legal proceedings independent of Moscow, the election of the hetman, colonels, foremen and the city administration, the Ukrainian gentry and the laity retained all the property, privileges and liberties granted to them by the Polish authorities. Practically, Ukraine was part of the Moscow state as an autonomous entity. A strict ban was imposed only on foreign policy activities.

In 1657, Bogdan Khmelnitsky died, leaving to his successors the largest state with a certain degree of independence, fenced from external intervention by the Ukrainian-Moscow treaty. And what did the colonels do? That's right, sharing power. Elected on the Chigirinsky Rada 1657, hetman Ivan Vygovskoy enjoyed support on the right bank, but had no support among the population of the left bank. The reason for the dislike was the pro-Western orientation of the newly elected hetman. (Oh, how familiar this is!) A rebellion broke out on the left bank, the leaders were the ataman of the Zaporizhzhya Sich Yakov Barabash and the Poltava colonel Martin Pushkar.

To cope with the opposition, Vygovskoy called for help ... the Crimean Tatars! After the suppression of the rebellion, Krymchaks began to rush throughout Ukraine, collecting prisoners for the slave market in the Cafe (Theodosia). Rating hetman dropped to zero. In Moscow, in search of the truth, offended by the Vyhovsky foremen and Colonels, bringing with them news, from which the king and the boyars went round: taxes are not collected, 60.000 gold, which Moscow sent for the maintenance of registered Cossacks, disappeared unknown where (nothing like?), the hetman cuts the heads to obstinate colonels and centurions.

To restore order, the king sent an expeditionary force to Ukraine under the command of Prince Trubetskoy, who was defeated by Konotop from the combined Ukrainian-Tatar army. Together with the news of the defeat, news of open treason against Vyhovsky comes to Moscow. The hetman concluded a treaty with Poland, according to which Ukraine returns to the bosom of the Commonwealth, and in return provides troops for the war with Moscow and the consolidation of the position of the Ukrainian hetman. (Hadiach agreement1658) The news that Vygovskaya still swore to the Crimean Khan did not surprise anyone in Moscow.

The contract concluded by Vyhovsky did not find support among the people (the memory of the Polish order was still fresh), the suppressed rebellion broke out with a new force. Hetman leave the last supporters. Under the pressure of the "foreman" (leading top), he renounces the mace. In order to extinguish the flames of civil war, Yury is chosen to be the hetman of Bohdan Khmelnitsky’s son, hoping that everyone will follow the national hero’s son. Yuri Khmelnitsky is going to Moscow to ask for help for Ukraine bloodied for civil war.

In Moscow, the delegation was met without enthusiasm. Treason sworn allegiance to the king Hetman and Colonels, the death of the troops specifically spoiled the atmosphere at the talks. Under the terms of the new treaty, the autonomy of Ukraine was curtailed; in order to control the situation, large-scale garrisons of Moscow archers were located in major cities.

In 1660, a squad under the command of the boyar Sheremetev came out from Kiev. (Russia, declaring war in 1654, Poland, still could not finish it.) Yuri Khmelnitsky with his army hurries to help, but hurries so that he does not have time. Under Slobodyshchem, he stumbles upon the Polish crown army, from which he is defeated and ... concludes a new treaty with the Poles. Ukraine is returning to Poland (although no autonomy is out of the question) and is committed to deploying troops for war with Russia.

The left bank that does not want to go under Poland chooses its hetman, Yakov Somka, who is raising Cossack regiments to the war against Yuri Khmelnitsky and sending ambassadors to Moscow asking for help.

You can continue further. But the picture will be endlessly repeated: more than once the colonels will raise revolts for the right to possess the hetman's mace, and will not just run from one camp to another. The right bank and the left bank, choosing their hetmans, will endlessly fight against each other. This period entered the history of Ukraine as “RuPina”. (Very eloquently!) By signing new treaties (with Poland, the Crimea or Russia), the hetmans each time paid for military support with political, economic and territorial concessions. In the end, from the former "Square" there was only one memory left.

After the betrayal of hetman Mazepa, Peter destroyed the last vestiges of Ukraine’s independence, and the hetman’s very breathing incense was abolished in the 1781 year, when the general provision on gubernias was extended to Little Russia. That's how ingloriously ended the attempts of the Ukrainian elite to sit on two chairs at the same time (or alternately). The chairs parted, Ukraine fell and broke into several ordinary Russian provinces.

The problem of choice

It is fair to say that for the Ukrainian people the problem of choosing between the West and the East never existed. Taking enthusiastically every step of rapprochement with Russia, the villagers and ordinary Cossacks always sharply negatively greeted all attempts of their pantry to go over to the camp of its enemies. Neither Vyhovskaya, nor Yuri Khmelnitsky, nor Mazepa could gather a truly popular army, like Bogdan Khmelnitsky, under their banners.

Will the story repeat?

According to knowledgeable people, history repeats itself all the time, and there is nothing under the sun that there would not be before. The current situation in Ukraine painfully recalls the events of more than three hundred years ago, when the country, like today, faced a difficult choice between the West and the East. To predict how things can end, it’s enough to remember how things ended 350 years ago. Will the current Ukrainian elite have enough wisdom not to plunge the country, like its predecessors, into chaos and anarchy, followed by a complete loss of independence?

Ctrl Enter
Noticed oshЫbku Highlight text and press. Ctrl + Enter
We are
Duma about hetman BogdanThe transfer of the Cossack army hetman to the Moscow service
60 comments
Information
Dear reader, to leave comments on the publication, you must to register.