The tests of the Yamal-730 hovercraft began. 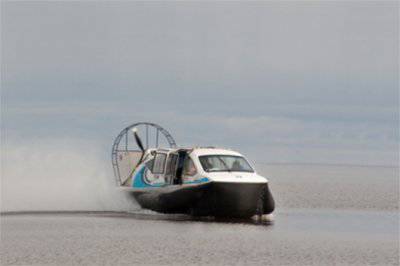 On December 10, the first Yamal-730 hovercraft was launched in St. Petersburg. The vessel, which was the result of cooperation between Russian and Belarusian designers, has high characteristics and therefore, at the construction stage, interested potential customers. It is alleged that Yamal-730 compares favorably with all existing boats of its class.


The new hovercraft is designed to carry patrol, transport, rescue, etc. tasks. Declared the possibility of working in any climate and in any conditions. The boat is able to move on any flat surface - on water, sand, snow, etc. During the development of the project, some technical solutions were applied that ensure high seaworthy characteristics. In addition, as stated, even with the maximum payload, the boat keeps well on the course and has good handling.

The project "Yamal-730" was developed by the St. Petersburg Central Design Bureau "Neptune" and the Minsk OKB TSP. Collaboration of design organizations began in 2012, and at the international naval salon IMDS-2013 they signed an agreement on the joint production of new equipment. It should be noted that other enterprises are involved in the project. Thus, St. Petersburg electroplating plant No. XXUMX was engaged in manufacturing the hull of the first boat. 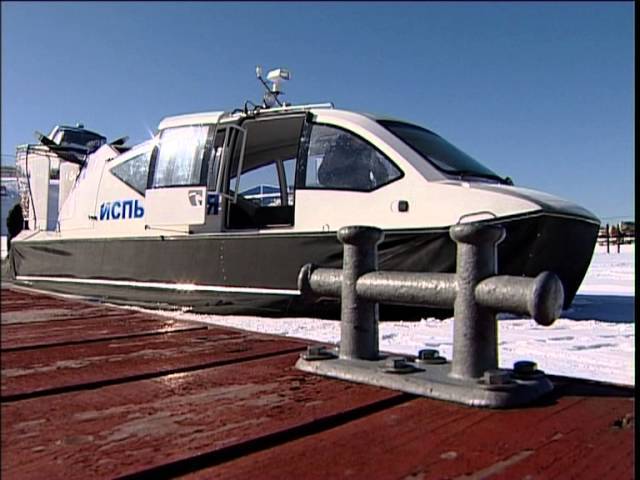 The Yamal-730 hovercraft is similar to other vessels of this type, but its design incorporates several original ideas aimed at improving performance. So, the boat is equipped with two petrol engines. One of them, having a power 75 hp, is connected to the propeller that drives the boat. The second, 30-strong engine using a separate screw forces air under the hull of the boat and creates an air cushion. The design of the airbag fencing uses cylinders, in the snap-in of which there are no removable parts.

The hull of the boat "Yamal-730", made of composite materials, accommodates a rather large passenger and cargo cabin. The payload of the boat is 700 kg, which allows you to carry various loads or up to 10 people with a crew of one person. Landing and loading of various goods is carried out through large doors in the sides of the hull. To ensure high strength and low weight, the hull of the boat is made of three-layer composite panels created in OKB TSP.

The Yamal-730 hovercraft is offered to potential customers as a universal vehicle suitable for performing various tasks related to transporting people and goods or patrolling any territories. Thus, the boat can be interesting both to law enforcement agencies or rescuers, as well as to commercial organizations that need a universal vehicle capable of traveling through water and on even land.

According to the First Deputy Director General of the Neptun Central Design Bureau S. Kotlovich, the Russian Ministry of Emergency Situations, the Navy and the engineering forces have already expressed their interest in the Yamal-730 hovercraft. In addition, negotiations may begin with the leadership of the Belarusian Emergencies Ministry in the near future. Thus, even before the end of the test, the first contracts for the supply of new equipment can be signed. Estimates of the commercial potential of such boats vary. The number of Yamal-730-type boats needed by potential buyers can be estimated from a few dozen to over a hundred.

However, at the moment, manufacturers can not quickly provide boats to all comers. Production capabilities of all organizations involved in the project allow building no more than 24 boats per year. Any information about the possibility of expanding production and increasing the rate of production of equipment is missing. It is known that the serial boat "Yamal-730" will cost the customer about 4 million rubles.

There is information that the Russian Ministry of Defense and the Ministry of Emergency Situations have already placed preliminary orders for new boats. Details of this have not yet been announced, but some information about the project suggests that the military will receive a modified version of hovercraft. According to reports, Russian and Belarusian shipbuilders are currently working to create additional reservation panels suitable for installation on Yamal-730 boats. The use of composite armor plates will help protect the crew and boat units from bullets and shrapnel.