The madness of "imperial integration" 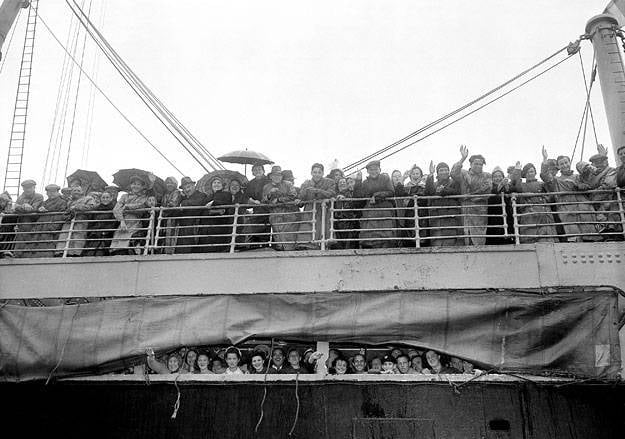 In the 19th century and the beginning of the 20th century, the main migration flow was directed from the center to the periphery: from 1846 to 1924, more than 60 million people left Europe. Photo: AP

Disputes over the problems of migration in Russia are not subsiding, and the contradictions in this area are becoming more serious. Opponents and supporters of attracting workers from the countries of the former Soviet Union to the country use economic, demographic and social arguments in discussions on this topic, appeal to "justice" and "stories". At the same time, however, the most significant factor that stimulates the influx of migrants into Russia remains unaffected, the political factor.

Today, Russia's foreign policy is determined by Vladimir Putin - and he is firmly convinced, on the one hand, that “the collapse of the Soviet Union was the greatest geopolitical catastrophe of the twentieth century,” and on the other, that the “Soviet Union was Russia, only called differently. " These two theses make it necessary to at least be wary of the allegations that Russia is not going to recreate the “Soviet empire” in one form or another. Yes, so far we are talking about the Customs Union, the development of Eurasia, new forms of political cooperation, but there is no doubt that this is being done to create a single humanitarian space in the territory of a significant part of the former Soviet Union. Putin made this very straightforward and blunt-voiced in his program article published two years ago.

Easily traceable trends indicate that the “Putin’s plan” in this part of it is being successfully implemented. If in the middle of 1990's until 65% of migrants working in Russia came from Ukraine, Belarus and Moldova, now more than 60% come from Central Asian states - and their share will increase if the Russian authorities, as they threatened, introduce a visa regime with Ukraine after signing the Agreement on associations with the EU. The total number of migrants living in Russia over 10 years increased from 2-2,5 million to 12-13 million people. However, their influx promotes little the integration project, with respect to which more and more skeptical statements are heard even from Minsk and Astana. Why is this so?

In our opinion, the reason lies in the changes occurring in the world, which the Russian political elite does not want or can not take into account. For millennia, the world was ruled by empires - and the Russian was the largest among them all, given the scale of its territory and for how many consecutive years it was ruled from a single center. But all these empires collapsed — and in less than two centuries, from the 1820 to the 1990. Global leadership in the twentieth century was captured by the country, which not only initiated the anti-imperial movement in the ever-memorable 1776, but also became the most multicultural society in human history by the beginning of the 21st century. In parallel with this shift, another, no less important, occurred: if in the XIX century the main migration flow was directed from the center to the periphery (from 1846 to 1924, more than 60 million people left Europe, or 29% of its population as of the beginning of this period ), then from 1960 to 2010, more than 15 million migrants from developing countries arrived in 28 EU countries, or 9,3% of the total number of Europeans who lived in these states as of mid-twentieth century.

If you connect these trends, you get a simple and clear picture. The empires, as political systems in which the more developed metropolis controlled the less developed periphery, existed when the metropolis was more mobile than the periphery. It was only under these conditions that she played an active role, and the introduction to a higher culture and a more advanced economic system was carried out collectively (as it happened, for example, after joining Georgia or Ukraine to Russia). On the contrary, the collapse of empires and the spread of globalization brought with them completely reverse trends: the periphery became more mobile than the metropolis, and integration into the developed world turned from a collective process into an individual one. From this point on, the periphery began to degrade - after all, it is much easier to leave a distressed country than to try to change it (but this is not the point now). The former metropolises, becoming a magnet for the attraction of people from their former colonies, lost the chance to restore political domination over them.

In fact, in most of the world's capitals, politicians took this fact with relief; Moscow, perhaps, was the only exception. Of course, anyone who settles in the Kremlin will be infected with the virus of imperialism — but it’s impossible not to see that empires in their traditional form do not exist and cannot exist. In the classical empire, the center and periphery practically did not overlap. In the British Isles in 1900, about 35 000 came from colonies - less than 0,1% of the population. In imperial Russia in Moscow and St. Petersburg it was almost impossible to meet the inhabitants of Baku or Bukhara. Even in the USSR, which set as its goal the creation of the Soviet people as a “new historical community” of people, ethnic Kazakhs, Uzbeks, Tajiks, Kyrgyz and Turkmen made up in aggregate ... 0,6% of the RSFSR population. Classical empires - I will emphasize this once again - suggested migration from the center to the periphery and limited migration from the periphery to the center. From the middle of the 1950-x to the beginning of the 1980-x. in the Soviet Union, more than 8,5 million people moved from the European part of the country to the Urals, to Central Asia and Transcaucasia, while the reverse flow was almost 6 times (!) smaller. The most important imperial efforts were to equip the periphery - and therefore in Tajikistan in the middle of 1980-s the average income was only 23% lower than the average for the RSFSR, and British Kenya in the middle of the 1950-s had higher per capita income than South Korea . Everything we see today is the opposite trend: Russians are rapidly fleeing from countries with which the Kremlin intends to integrate (even in Kazakhstan, the share of Russians, Ukrainians and Belarusians in the total population has decreased from 44,4 to 26,2% from 1989 to 2010) , and in their footsteps hundreds of thousands of citizens of these mostly “failed” states are sent to Russia.

Opening doors to migrants from peripheral countries means not to recreate an empire, but to destroy the metropolis. The decline of Rome was a classic example - but at that time the ruling class had no alternatives: the economic system did not suggest the possibility of explosive efficiency gains. However, now, when more than 1 million people work in the Russian Railways system, 29 000 operates on the Canadian railways, when the population density beyond the Urals is 2,3 people per 1 square meters. km, and in Alaska - just 0,5 people per 1 square. km, you should not believe in the tales of depopulation and the inability to do on their own in the development of the country. Integration is different from expansion, even if Vladimir Putin does not want to see it. “Imperial Integration” is an obvious nonsense. The union created by the Treaty of Rome differs from the empire built by Rome two thousand years before - in far too many ways. Integration presupposes the unity of cultures, economies and values, rather than the desire to seize the maximum territory (which in the context of globalization acts as a burden rather than an asset - especially in deep continental zones). There is no doubt that Muslim Turkey, almost 50 years seeking admission to the EU, will join it later in Christian-secular Ukraine - while we are ready (if we talk about the whole of Central Asia) to add to 140 million Russians almost 67,5 million representatives are not at all the worst but a completely different cultural tradition. Even after adopting poor Bulgaria in the EU, the level of per capita GDP, which turned out to be the smallest in this country, is lower than the European average by half, while the gap between Russia and Tajikistan exceeds 10,5 times. And that “Asian” is found by domestic gurus in the minds and behavior of those whom Catherine II called “Russian Europeans”, for my discourse on “Eurasianism”, it is difficult for me to understand.

To summarize, I will say this. Immigration from the countries of the eastern and southern parts of the post-Soviet space is not able to solve any of the problems facing Russia. It is conditioned to a minimum extent by considerations of maintaining justice in relation to our former fellow citizens, to a large extent by the motives for enriching the business and bureaucratic elite and, on an overwhelming scale, by the baseless geopolitical ambitions of the Russian political elite. Not understanding the differences between building empires and free integration, not being able to modernize the country through increased economic efficiency and fearing loss of support from the Europeanizing middle class of large cities, this elite is ready today to sacrifice the country in order to prolong its own tenure. And so it is she, and not the unfortunate immigrants from the Central Asian republics, who in the overwhelming majority are simply trying to escape from poverty

Ctrl Enter
Noticed oshЫbku Highlight text and press. Ctrl + Enter
We are
Missed chapter "Strategy-2020"
34 comments
Information
Dear reader, to leave comments on the publication, you must to register.