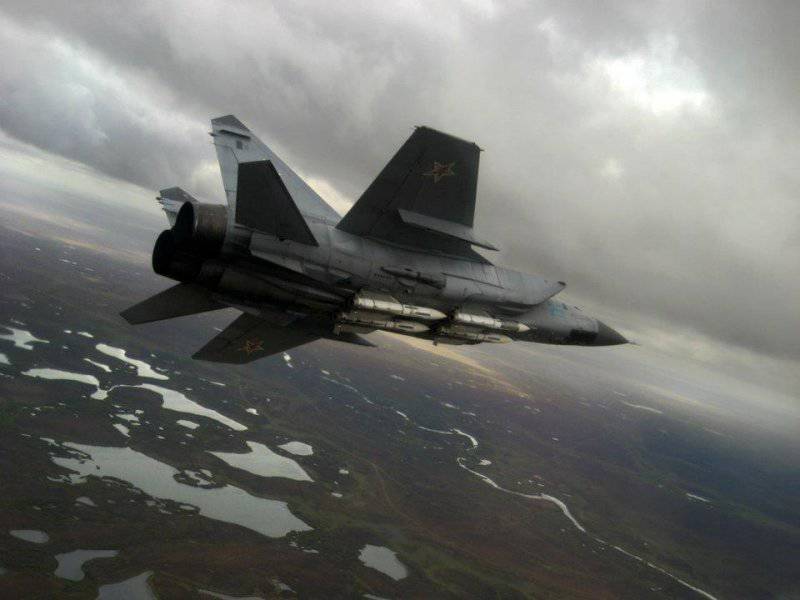 Even if the SR-71 Blackbird supersonic strategic reconnaissance planes were never shot down during the entire period of service in the US Air Force, they were confronted with an adversary who could do it - the MiG-31 (NATO code - Foxhound), December, The Aviationist 11 wrote .


The SR-71 had impressive performance due to the unique properties of the airframe, the ability to fly at speeds above 3,5M at an altitude of 88 kt. Ft. (26800 m), a small EPR at that time, and a powerful electronic countermeasure system. Such high performance allowed this aircraft to make reconnaissance flights over the Soviet Union during the Cold War.

The only aircraft that had the technical capabilities of its interception was the American carrier-based fighter F-14 Tomcat with high-speed long-range air combat missiles AIM-54 Phoenix. But these missiles were optimized to intercept Soviet cruise missiles, which flew at the same height as the SR-71, but the Phoenixes, having an 4-5M speed, were fast enough to intercept this aircraft.

In order to stop SR-71 flights, the USSR developed an interceptor with F-14 capabilities. Before the MiG-31, the only Soviet combat aircraft with speed close to the SR-71 was the MiG-25. But if this interceptor could develop the maximum speed of the 3,2M, it could not withstand it long enough to reach the American intelligence officer. Another serious problem was the fact that the MiG-25 had P-40 (AA-6) missiles with insufficient interception capabilities for such targets.

These shortcomings were overcome in the 1980-ies with the creation of the MiG-31 and the P-33 (AA-9) missiles. These SDs were very similar to AIM-54, they could effectively shoot down not only American strategic bombers, but also targets like the SR-71. These findings are confirmed in Paul Crickmore's book Lockheed Blackbird: Beyond The Secret Missions.

In this book there is evidence from one of the first pilots of the MiG-31, Captain Mikhail Myagkoi, who on his fighter plane took off several times to intercept the SR-71. The pilot says that 31 January 1986, he could knock down the SR-71. “The SR-71 interception scheme was calculated to the last second. MiGs were supposed to take off exactly 16 minutes after the discovery of a scout. The signal to intercept came in 11.00, he was accompanied by a piercing call, then was duplicated on the speakerphone line. All this took place against the backdrop of frantic shouts with excessive excitement, the appearance of the SR-71 was always accompanied by nervousness, ”the pilot recalled. The captain took the SR-71 to escort at an altitude of 52 thousand feet (15900 m) at a distance of 120 km. The SR-71 immediately rose to a height of 65676 feet (20000 m), but, as Soft says, it still remained in the affected area. “If the plane violated the airspace, the missiles would be launched. He had almost no chance of dodging the P-33, ”says the captain. After this incident, "Drozdy" did not approach the borders of the USSR.

There was another case. 3 September 2012, an article appeared by Rakesh Krishman Simha (Rakesh Krishman Simha) on indrus.ru, that 3 June 1986, a similar incident was also recorded. On that day, a group of six MiG-31 sailed to SR-71 over the Barents Sea, where it imitated a group interception of a target with firing rockets from different directions. After this incident, SR-71 stopped flights to the borders of the Soviet Union and several years later were decommissioned. But even if we assume that the MiG-31 was not the main reason for the resignation of spy planes, it must be admitted that the Soviet air force had developed an effective tactic to intercept the SR-71.

Interceptors MiG-31 are still in service. But the future successor to Drozd, designated SR-72, capable of achieving 6M speed, should feel pretty safe at hypersonic speed.

Ctrl Enter
Noticed oshЫbku Highlight text and press. Ctrl + Enter
We are
History of the Bulgarian Air Force. Part of 3. Postwar period and modernityNew car Foxhound was presented at the exhibition in the UK
134 comments
Information
Dear reader, to leave comments on the publication, you must to register.