On the three-year anniversary of the "death of multiculturalism in Europe": there are no new recipes, in addition to the good old Nazism 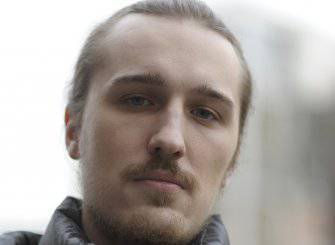 The director of the Domino's pizza chain in the UK, Lance Bachelor, has big problems - he cannot find workers. This is despite the fact that his network is not one of the cheapest and is considered an attractive workplace, but you have to go - the whole CEO has to contact the government through the press and ask for urgent opening of borders for migrants. The British are not going to him, but the business must somehow be expanded.


Actually, since we recently dwelt on the details of how the European Equality works, it will be reasonable to mention what has broken in it, and just the present case is perfect.

There is no one to work

The essence of the problem was stated by Mr. Bachelor himself. People who previously worked for him no longer want, and there is no place to take new ones. Moreover, he has had such nonsense for a year now - he brings in workers, and they leave him. Bachelor is ready to employ 1000 migrants tomorrow - business is sorely short of driver-drivers and cooks.

For comparison, in the UK at the moment on the unemployment benefit is sitting 1 000 000 British at the age from 18 to 25 years. Along with them, a huge number of refugees of African and Arabian origin are sitting on the allowances, and working as a pizza peddler in their neighborhoods is more expensive.

Eastern Europeans, who, according to market logic, fell to clean up after both local and refugees, were not stupid either, and, at the slightest opportunity, run out to clean up the job themselves. This resource has not yet been fully exhausted - when Romania and Bulgaria joined the EU, one of the conditions was a ban on the work of citizens of these countries in Western Europe until January 1, 2014. Soon, Mr. Bachelor will appear, according to various estimates, from 8 to 10 thousands of Bulgarians annually, who will violently dump and take work away from the Poles and the Baltic states, and then, you see, Western Ukrainians will wait.

However, it still does not solve the problem of white sahibs, spitting into the ceiling in anticipation of easy high-paying work. It was promised to them within the framework of the post-industrial structure, when there is an eternal collecting factory overseas with the Chinese, meekly giving away all the added value. However, this way of life collapsed, not really beginning, but the notorious policy of multiculturalism finished the situation. Thanks to her, the migrants divided into two branches - those from Eastern Europe dreamed of integrating into civilization and were ready to work, while refugees from Asia and Africa drove in by thousands on the wave of tolerant rhetoric and largely planned to live well at the expense of Europeans. For example, living in the old way by large polygamous families without a stamp in the passport and giving birth to children "in an incomplete family" and with increased allowance. In London, the lowest ratio of black children to white pupils in urban schools is 60%, below simply can not be found.

Thus, Eastern Europeans admitted to the body have to serve both the indigenous population and the refugees, giving rise to the jokes that Europe needs Poland, since the Negroes will not take on the Vantuz. Meanwhile, they are less and less comfortable working, because of the crisis, Western European countries close their labor markets and start saving even on such cheap labor as the Young Europeans, because of which people of Mr. Bachelor are already panicking. Their business built on routine, without a constant influx of migrants, wasting away.

Multiculturalism is dead, long live it

However, none of the sahibs take the plunger instead of the Poles in a hurry. Rather, they would have taken away from Blacks their privileges of dependents and sent them to other migrants to earn money, but it is absolutely impossible to do this under the conditions of a continuous roll of propaganda of multiculturalism and tolerance. Even despite the loud recognition of the first persons, the process is developing steadily. Recall that since the loud statement of Angela Merkel about the failure of a multi-stump three years have passed, and went only further.

To understand what Europe is offering today to engage its residents, it’s enough to watch a video that was recently posted on the official channel of the European Parliament on YouTube.

“Dream!” - and blacks jump into the water from a shabby trough, which with grief in half took them from Africa to the shores of Spain or Italy.

“Agree!” - and the woman throws off her veil, smiling at her black husband.

“Don't agree!” - and an aggressive crowd with people covered with black headscarves, stones the police.

“Love!” - and a couple of people smeared in mud, neither persons, nor whose sex is left, kisses passionately.

“Hate it!” - and the hipster, having recharged the AK, goes through the factory, shooting from the belt.

Well, at the end of the roller of morality: "We make many different elections, but in Europe every opinion has an equal chance."

Comments to the video, which is typical, are disabled.

An ordinary European does not feel comfortable with his progressiveness, but he cannot influence anything. Swedish authors Karl-Olov Arnstberg and Gunnar Sandelin were publicly harassed for publishing the book Immigration and Hushing up (Invandring och mörkläggning). It provides detailed data on how much Sweden is paying for following the current migration policy, just facts supported by statistics. They managed to print it only in Norway, because not a single Swedish publisher took such a high risk.

On the other hand, the Russian national football team received a remarkable coach, Fabio Capello, only due to the fact that in England a similar brutal persecution for the “racist remark” suffered the captain of the national team John Terry. Capello looked at how they actively interfered with the mud of an honored athlete, who had fought for the national team for years, and left.

Under conditions of indiscriminate defamation, anyone who dares to speak out even with light criticism begins to work an old European mechanism, known in the 21st century as Anders Bering Breivik. Actually, the renaissance of the European right-wing parties began with his terrorist attack, which saw in this the breakthrough of the information blockade and a reason to speak more loudly about the problem of migration. Some of these new parties are looking to Russia with hope as one of the last national states of Europe in the face of globalism, however, in the case of young parties, the impression of friendliness is deceptive, because their basis, in the absence of the other, is usually pro-fascist.

The situation is complicated by the fact that the degraded European education reduces Hitler’s crimes to the notorious six million Jews, completely eliminating tens of millions of Russians who died (great, little, white), other Slavic peoples, Gypsies, etc. In turn, the compulsive comparison of quite moderate Right-wing politicians like Marine Le Pen with A.A. Hitler and criminal prosecution for denying the Holocaust in its edited version without Slavs leads to a gradual rehabilitation in Hitler’s mass consciousness as a fighter for white Europe. It turns out that he was not so wrong; he “fought for the preservation of white Europe” with all these “blacksteads, gypsies, Jews and other communists” who invented multi-cult Europeans to perish. Accordingly, Hitler’s legacy is being rethought.

Recently, a certain Marian Kotleba from the party Our Slovakia won the election of the governor of one of the central regions of the same country. It represents a rather typical example of a new European “movement from below” in response to the challenges of time. He is an active participant in anti-Gypsy rallies, which smoothly turn into pogroms, loves to walk in public in an SS uniform and is an ardent admirer of the last fascist ruler of Slovakia, Josef Tiso. At the same time, the Kotleba party calls for the country's withdrawal from NATO, the introduction of a national currency, limiting the influence of Brussels and in general "putting an end to the unjust distribution of benefits in favor of parasites, and not only Roma." The European Jewish Congress has already made a request to intervene immediately and put an end to creeping fascism.

It is noticeable that Kotleba’s mind does not produce anything of its own. He, like many new European skeptics and right-wing patriots of the EU countries, made a mental setback in times before the dead-end "cultural Marxism", discovered traditional European fascism there and accepted it entirely. Now Kotlebe is primarily hampered by the Gypsies, on whom Slovakia is forced to spend a shrinking budget, so he usually retouchs anti-Semitism with half a hint. It is understandable, with his idol Josef Tiso in Slovakia, there were about 120 thousands of Jews, and then there were somewhere around 2 with a few thousand, the scale of the problem is not the same.

The list can be continued - a similar in content, nationalist and fiercely anti-Soviet Jobbik is gaining momentum in neighboring Hungary, Breivik himself has already tried to register the fascist Scandinavian party, but could not do it without another founder. And he will find the founder - and will register, and there will be supporters, because every opinion must be heard. The locomotive of tolerance, which, in response to civilized remarks, refuses to slow down and strives to move "these fascists", runs the risk of once falling under the slope from the hands of already real fascists.

Thus, the fact that a white European went to solve the problem of migration, having risen behind the counter or sat behind the steering wheel on his own, is not audible, but it has long sounded like seemingly forgotten and thrown into the dustbin. stories notes.

To count on the fact that when the world reaches the lowest point of the crisis, moderate European nationalists accumulate all the indignant ones, it is not particularly necessary. Everyone remembers how Germany killed by hyperinflation joyfully met the Nazis, who had promised their former satiety and order. This perspective is particularly unpleasant, given that the crisis will be the first to lose Eastern Europe without independence, where the entire methodological basis has been laid under the charge of the Russians for all the failures.

Another question is what Brussels had in mind, transforming well-fed burghers into people who are ready to defend themselves against demonic tolerance by radical methods, and where these people will go. Both times after the awakening of the European solidarity of self-consciousness, the banners of its carriers had to be collected on the way from Smolensk to Moscow and back, and I would like history not to repeat itself.

Ctrl Enter
Noticed oshЫbku Highlight text and press. Ctrl + Enter
We are
About Stalin and KhrushchevWhat you didn't want to know about England
103 comments
Information
Dear reader, to leave comments on the publication, you must to register.