It's hard to part with the dream of aircraft carriers 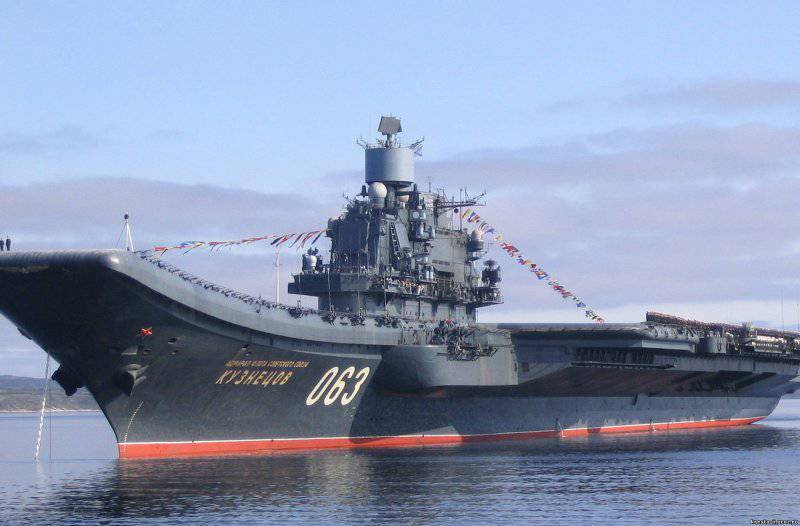 Russian admirals and shipbuilders do not part with the dream of creating aircraft carriers for the Navy and even aircraft carrier strike groups (AUG), and not one, but two or three, but, of course, five is more desirable. This painfully obsolete topic was once again the subject of an article by shipbuilding engineer Alexander Nikolsky "The Russian fleet is going under water" ("NVO" No. 41, 08.11.13). The author of the article, with specific figures in hand, proves, as twice two is five, and not four, that instead of 10 nuclear submarine missile cruisers (APRK) for the same money, you can build five aircraft carriers - one aircraft carrier every two and a half years. And 250-270 multipurpose carrier-based fighters for new ships should be taken from the Air Force without prejudice to combat readiness. Paradoxically, but this fantastic idea, completely divorced from life, aroused a warm response and approval of some naval specialists, including among the designers of nuclear submarines. Although they are just the least of all should be interested in the transfer of priorities in shipbuilding from the submarine fleet to the surface one. But the ways of designers are inscrutable.


However, let us return to real life and try to understand this problem, especially since the answers lie on the surface.

So, let's start with the question: where to build? In the Soviet Union, aircraft-carrying cruisers (“main caliber” of cruisers — rockets, and aircraft carriers — aircraft, it turned out not at all) were built only in Nikolaev. And now the Nikolaev shipbuilders and the Ukrainian government will not refuse such a seductive order. Here are just experts at the shipyard left with Gulkin nose.

If we build on Sevmash in Severodvinsk, then this means paralyzing the fulfillment of all other orders for several decades. In the workshop where the four hulls of nuclear submarines fit, there will barely be one aircraft carrier hull. And to block the gates of the shop for many years, through which ships take out to the outbuilding pool, means taking the workshop out of the production cycle for as long as the future aircraft carrier is being completed in the fresh air in the drained pool. Remember the example of the Vikramaditya, which for almost 14 years was locked up in this workshop by a civilian ship built to a commercial order.

Let's go further. Collect five deck regiments aviation they couldn’t have been in the Soviet Union. According to the technical passport, the aircraft carrier “Admiral of the Fleet of the Soviet Union Kuznetsov” can be based and serviced 16 aircraft Yak-41M, which were never on it, and 12 Su-27K, as well as more than two dozen helicopters Ka-27RLD (radar patrol), Ka-27PLO (anti-submarine defense) and Ka-27PS (search and rescue). Instead of helicopters, one would have to have long-range radar patrol and anti-submarine defense aircraft. But they were not there.

The 279 of the Su-24 aircraft (Su-33K) was part of the 27-th separate naval fighter aviation regiment; by the end of 2005, 22 remained. One aircraft lost in the 17 crash of June 1996 of the year and one in the 5 crash of September 2005 of the year. In reality, the Kuznetsov set off for combat service, having even fewer aircraft in its hangar.

Defenders of aircraft carriers offer to reduce orders for "land" promising aircraft MiG-29, Su-35, T-50, and instead order the deck. Tukhachevsky also proposed to mechanize the army at the expense of the technology of Ochakov's times and the conquest of the Crimea. He ended badly. For the five aircraft carriers there is not and will not be, because in the next 10 – 20 years it is necessary to replace the aircraft with more modern ones in the Air Force. The Navy will wait.

The proposal to transfer the pilots of the Russian Air Force to deck-based aircraft does not hold water. Today in Russia there are fewer deck pilots than astronauts. This is a "piece" specialist. It must first be grown, and then throughout its entire service, its flight training must be maintained and improved. He, as a doctor, must study all his life. And for this, too, need airplanes, training complexes - in a word, training infrastructure on the coast.

Carriers also need bases for parking and maintenance. For Kuznetsov, they built something similar to such a base in Vidyayevo - with a jetty, a boiler room (to provide the floating city with a ferry), an electrical substation. But the Kuznetsov stood there for long. In addition to steam and electricity, experts are also needed. And they traveled to Vidyaevo from Murmansk, or rather Rosta, where the 35 shipyard is located, more than 100 km away. Therefore, they thought and thought in the fleet and transferred the “Kuznetsov” to Growth - it turned out cheaper and more convenient for everyone.

In Soviet times, the main slogan of Glavpur (Main Political Directorate of the SA and Navy) was “First of all ships, and moorings later.” Under the berths meant the entire coastal infrastructure. Since then, I have not heard that somewhere built a new base with the latest technology and technology. So, for aircraft carriers it is necessary to create new bases. These are the costs that the initiator of the change does not envision: ten submarines per five aircraft carriers.

The Russian Navy has one heavy nuclear missile cruiser, three non-nuclear missiles, the cruiser Moscow has been in service for 30 years, and four destroyers. That is, military escort ships are not recruited even for two aircraft carriers. So you have to build.

Well, now, the most important thing. No country in the world, except Russia, has experience in operating aircraft carriers in northern latitudes. You can not take off and sit on the icy deck. You can not prick the ice with a stem. A lot of things can not, even if you really want. It is known that aircraft carriers are weapon attacks, not defenses. And we have no one to attack. Neither in the southern latitudes, nor in the middle. And for the protection of our oil-producing platforms in the Arctic, for which, as suggested by military experts, a serious struggle will soon unfold, they are clearly not suitable.

So it remains to be guessed at the coffee grounds, who really need these aircraft carriers: shipbuilders - for the sake of profitable orders, but so far they cannot build a tanker fleet. Or today's captains of rank 1 - for the sake of getting admiral epaulets in the future. Here they are cruelly mistaken in their calculations - they will be fired into the reserve by age earlier than the first aircraft carrier is launched.

The bottom line is the dissatisfied feeling of a Russian patriot: the Americans have 12 aircraft carriers, and we have only one and the half cruiser. It's a shame.

Ctrl Enter
Noticed oshЫbku Highlight text and press. Ctrl + Enter
We are
5-I operational. Interview of Admiral Retired Selivanova Valentin EgorovichMissile hunters and floating airdrome killers
163 comments
Information
Dear reader, to leave comments on the publication, you must to register.