Message to the Federal Assembly: offshore, USE, the Constitution and the Far East 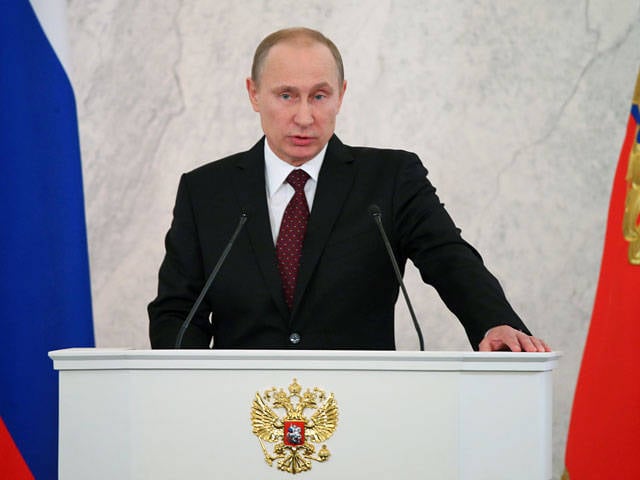 Vladimir Putin outlined the priorities for the country's development in the near and long term. The President’s speech lasted one hour and ten minutes. The current message has become in every respect jubilee: the twentieth in a row for the whole history their announcement and tenth for the current head of state. The live broadcast from the Kremlin led the site Vesti.ru, as well as the TV channels "Russia 24" and "Russia 1".
Constitution: to change or not to change?

Vladimir Putin began his speech on the subject of changes to the Constitution - it was she who was most actively discussed in analysts' forecasts regarding the upcoming Message. The President of Russia stressed that the constitutional framework should be stable, and above all this concerns the second chapter of the Basic Law, ensuring the rights and freedoms of citizens. “At the same time, point corrections of other chapters are possible and necessary,” the Russian president stressed. As an example, he cited the expected unification of the Supreme and Supreme Arbitration Courts. According to the head of state, it will ensure the implementation of the basic constitutional principle - the equality of all before the law.

One of the most powerful statements by Vladimir Putin was the new method of dealing with the erosion of the tax base with the help of offshore companies. Revenues of companies that are registered in offshore jurisdictions should be taxed in Russia, the president said. He paid special attention to the topic of de-offshorization. In particular, he said that companies registered in foreign jurisdictions would not receive state support, VEB loans and government contracts.

“According to experts, last year goods worth 111 billions of dollars passed through offshore companies. This is one fifth of all Russian exports. These figures are the conclusions of capital that should work in Russia and the country's direct budget losses,” Putin said.

All important decisions in a country should be made taking into account the opinions of its citizens. In this regard, the head of state proposes to introduce a system of so-called "zero reading." Vladimir Putin called for the Public Chamber, the Council for Human Rights and other human rights organizations to join the work on the draft law "On Public Control".

Vladimir Putin said that next year school graduates will have to write a final essay. "The assignment has long been given - starting next year, to provide a final essay in the senior class," the Russian leader said. "Naturally, its results should, along with the USE, be taken into account when entering universities," the president stressed.

In addition, Putin is convinced of the need for mutual recognition of certificates of school education with all CIS countries to pass the USE when entering Russian universities.

The President of Russia called for solving the problem of children’s schooling in two shifts. The head of state touched upon this problem in his Address to the Federal Assembly. "Already, classes are taking place in many schools in two shifts. Almost a quarter of Russian schools, and in cities - almost half - work according to such a system," he stated. Putin added that "in the coming 5-6 years, thanks to the positive demographic dynamics, the number of schoolchildren will increase by a million."

Putin declared that he would continue to uphold the position on the protection of traditional family values. “We know that there are more and more people in the world who support our position on the protection of traditional values, which for thousands of years constituted the spiritual, moral basis of the civilization of each nation,” said the president. According to him, in many countries, the norms of morality and ethics are revised, national traditions, differences of nations and cultures are erased. “From society, they now demand not only sound recognition of everyone’s right to freedom of conscience, political views and private life, but also mandatory recognition of the equivalence of good and evil - concepts that are opposite in meaning,” Putin said. In his opinion, "such a destruction of traditional values ​​from above leads to negative consequences for societies and is fundamentally anti-democratic."

Putin does not like chaos. Replica of Fyodor Lukyanov

In the Address to the Federal Assembly, Vladimir Putin, perhaps, for the first time clearly and unequivocally formulated the philosophy that guides the Russian state - conservatism. News it is difficult to call it - and the president’s earlier program speeches, and the entire logic of the Kremlin’s actions have always testified: it is this school of thought that is closest to the Russian leadership.

This time, the head of state simply explained what he meant by this, quoting Berdyaev. Conservatism prevents not moving forward, but moving backward - to the “chaotic darkness”, to the “primitive state”. Vladimir Putin does not like chaos very much, as he has said and written about many times before. And now he has drawn a clear boundary: “either slide to a further erosion of the foundations of the world order, to the triumph of the law of force, to fist law, to multiply chaos, or to collectively make responsible decisions”.

We can recall his article “Russia in a changing world,” published in February 2012, on the eve of the presidential election. Her pathos in describing the world around is reduced to a well-known medical postulate: do no harm. In essence, Putin addressed the leading Western countries, primarily the United States, with a puzzled question: what are you doing? Why does any major step — from intervening in regional conflicts and attempts to promote democracy to such a large-scale undertaking as a single European currency — destroy the remnants of the principles on which the world order was based?

It creates a new headache for everyone. Aggravates problems.

The Russian president, consciously or intuitively, proceeds from the idea that change is only for the worse today. Progress, from his point of view, is not self-valued, but should serve as a means of strengthening the sustainable foundations of development. If he leads to the opposite result - why such progress? And who ever said that this is progress?

There is a reason to criticize previous approaches to international relations and world affairs, some ideas are outdated, and partly have lost their effectiveness in modern conditions. They must admit, really changed dramatically. But the problem is that nothing comes to replace. More precisely, what they are trying to replace the good old principles does not create a framework, but only leads to less clear, fuzzy interpretations. So to the inevitable arbitrariness, therefore - chaos.

The emphasis on tradition, which has long been heard in the speeches of the president, and again emphasized in the message, is a clear desire to find at least some support. Conservatism, by definition, is opposed to the idea of ​​a universal world, each nation and culture is unique and, above all, values ​​its own identity. Hence, it is quite logical - not only for geopolitical or economic reasons - it looks like a turn towards Asia, which Putin proclaimed again. Moreover, he called the rise of Siberia and the Far East "our national priority for the whole XXI century." The Pacific region is perhaps the only one today that, actively participating in global processes, being a part of them, maintains its own cultural tradition. It is precisely this combination of modern economics and technology with a worldview rooted in the history of a nation and not changing its priorities that is probably the goal of Russia, as Vladimir Putin sees it.

The internal political part of the message is businesslike, substantive. But in the foreign policy section contains a serious application. It follows from Putin’s words: the country is in fact claiming to present in world politics a certain system of views, opposed to the fact that it had recently been unconditionally dominated. This is a noticeable change, because so far Russia's policy has been emphatically and deliberately non-ideological. The highest goal and value of foreign policy was considered pragmatism. Ideology is a two-edged and binding thing. However, in a world where images and representations clearly play a decisive role, a country claiming a leading position cannot do without bare mercantilism. Or just the negation of other people's ideas. We'll have to put forward an alternative.

Ctrl Enter
Noticed a mistake Highlight text and press. Ctrl + Enter
We are
"Black holes" of the world economy
139 comments
Information
Dear reader, to leave comments on the publication, you must to register.