In the US, working on a robot cockroach

December 13 2013
11
Currently, the United States is one of the recognized world leaders in the production of robotics, including military ones. At the same time, in the interests of the military, not only large enough robots, for example, android robots, but also rather small devices are being developed. Last year, the US Army began testing 2-x new intelligence robots, which are developed by well-known company Boston Dynamics. We are talking about relatively small robots - the RHex robot-cockroach and the four-wheel Sand Flea (sand flea) robot. Previously, Boston Dynamics has already become famous by releasing the world's fastest robot (we are talking about the Cheetah cheetah robot) and the LS3 military mule, also known as Big Dog, for transporting cargo.


The four-wheeled Sand Flea robot is able to jump to heights up to 9 meters, while its weight is only 4,9 kg. The battery capacity of this device is enough to make about 25 such jumps. The robot can quite easily jump onto the roof of a building or any object up to 9 meters in height. As they would say now, this is his main “trick”. According to experts, this robotic flea uses a special piston for jumping, which contains compressed carbon dioxide.

The walking robot cockroach RHex weighs a little more - already 13 kg, while it moves on 6 legs. This robot without any problems can move through mountainous terrain, mud and even swim. The battery installed on it is enough for 6 hours of continuous operation, the range of RHex is about 600 meters. The robot can be equipped with various equipment for monitoring the terrain, for example, a video camera. Robot cockroach is being developed by request, which was received from the US military. The robot is planned to be used during covert surveillance and reconnaissance in highly rugged terrain. According to CNET, the US military planned to use these robots in Afghanistan. 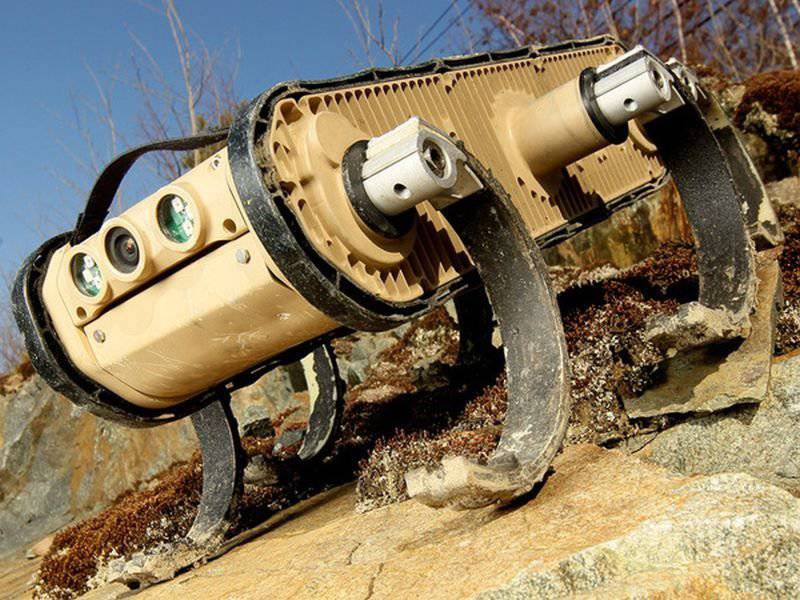 In 2013, the RHex robot cockroach, which engineers at Boston Dynamics are working on, got new ninja-legs. Ninja Legs - this is how the creators called their device. Thanks to these devices, the robot was able to move freely, not only by land, but also by water. According to IEEE Spectrum, the updated version of RHex was shown in November of this year at the exhibition of robots, which was held in the capital of Japan. It is reported that, although the new devices turn the RHex robot into an amphibian, they are still inferior in performance to specialized devices - the usual "legs" or "fins".

"Ninja legs" is a special design of carbon fiber embedded in a steel spring frame, which is installed in the place of relatives for the robot-cockroach legs. A new device of movement is a kind of "fins", which are able to bend at an angle up to 120 degrees. When the robot moves on the ground, they have no functions, but when the robot cockroach falls into the water, these devices play the role of propulsion. At the same time, the axes to which the ninja legs are attached begin to make pendulum movements.

“Ninja legs” for the new promising robot were designed by McGill University. It is reported that in comparison with the standard for RHex "legs", the new devices lead to an increase in energy consumption (in general, 15-20%). Energy is expended to maintain the rotation of the electric motor at a set frequency. These devices allow you to achieve greater speed through the water due to the flexibility. When the robot is in the water, the electric motors provide oscillating oscillations with an amplitude of 50 degrees and a frequency of 2,5 Hz. At the same time, specialists call not only the increased power consumption, but also the complication of the software and control systems of the robot, which are responsible for controlling the electric motors installed on it, as a drawback of the new system.

Earlier, American engineers were able to solve the problem of landing the robot after the jump; specialists from the technical laboratory of the University of Pennsylvania worked on its solution. The reason for the beginning of work was the fact that many modern robots, after falling, turn upside down and cannot climb on their own. A special tail helps to solve the problem: installing such a device on a robot provides the effect of landing it on legs. As part of the experiments, the specialists worked with the six-legged RHex robot, the design of which was complemented by a special swing tail. A similar tail, only naturally, has lizards, geckos, which masterly use it, not only deftly moving along the walls, but also always landing on their paws. 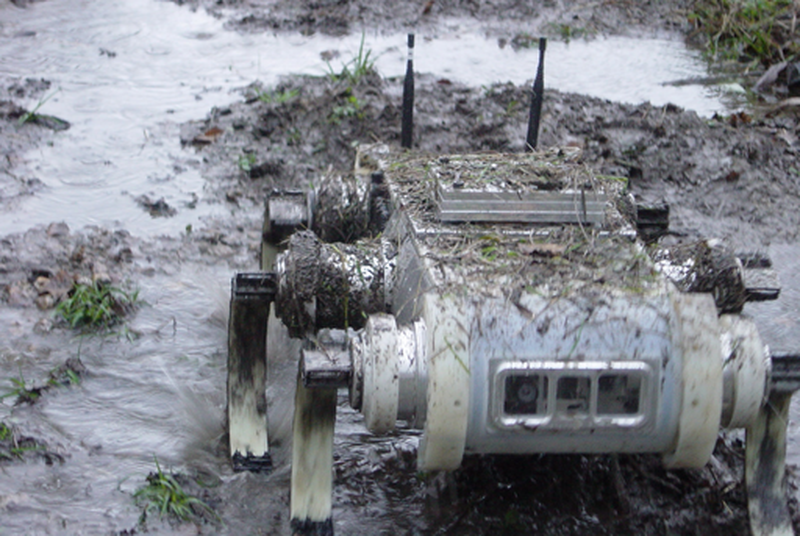 Previously, the effectiveness of this approach was confirmed by experiments with the Tailbot robot. A series of experiments with the RHex robot-cockroach only confirmed the fact that the stabilizing function of the “tail” can be used without any problems on a wide variety of robots: weights only from 1 gram to 10 and more kilograms. A gecko lizard is able to roll over to its feet, even if its fall height is less than the lizard body length. Such a unique natural ability would be useful to many modern robots. It is for this reason that the Pentagon actively funds the work carried out by the engineers of this technical laboratory.

The tail, which is a tube made of carbon fiber, is made in proportion 1 / 10 to the mass of the device body. This tail for a robot cockroach RHex has a center of gravity biased to the tip, it also has several modern inertial sensors, which are responsible for monitoring the position of the device body and the tail itself. In the course of the experiments, it was found that when dropping the tail-equipped robot RHex from a height of a centimeter 62, he had time to turn over in the air each time and landed on his back, not on his back.

Engineers believe that the tail is the best solution for the development of autonomous robots that will be able to move even on terrain with very difficult terrain, and will be able to overcome various obstacles with the help of jumps. In this case, the tail does not necessarily remain "dead weight", it can be used for mounting various sensors or antennas.