December 13 2013
7
While the media applauds the agreement between 5 + 1 and Iran, Thierry Meyssan, Mahmoud Ahmadinejad’s personal friend, sees this as a departure from the new Iranian government. In his opinion, it is absurd to argue that both sides removed the misunderstanding that President Ahmadinejad supported for 8 years. The truth is that Iran has abandoned its nuclear program and began to curtail it, receiving nothing in return, except for the gradual lifting of illegal sanctions. In other words, the country fell on its knees and recognized itself defeated. 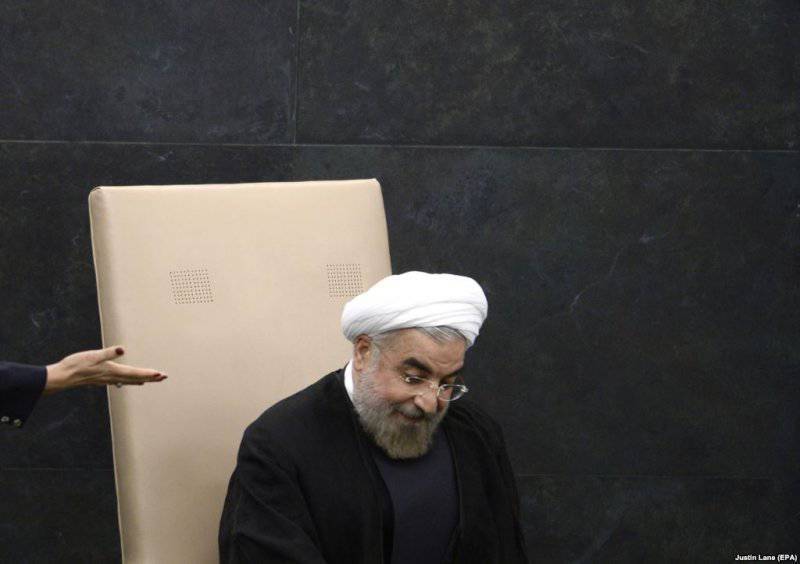 The signing of the agreement on Iran’s nuclear program on November 24 in Geneva was perceived by all, with the exception of Israel, as the elimination of a long-standing misunderstanding. All the signatories of the document tried to convince us that agreement could have been reached much earlier, if not for the excessive tricks of former President Mahmoud Ahmadinejad.

It turns out that they blocked Iran's foreign trade relations and almost unleashed a world war due to lack of thought.

In fact, of course, everything is wrong. The West has not retreated in any way from its demands, and Iran has completely refused its own. Even if the signed document is intermediate, Iran refuses to build a nuclear reactor in Arak, uranium enriched to 20%, and equipment to enrich it.

In 2005, the presidential election of Ahmadinejad should have given the Khomeinist revolution a new breath. In contrast to his two predecessors, the presidents Rafsajani (1989 - 1997) and Khatami (1997 - 2005), Ahmadinejad not only encouraged the policy of national independence, he was an anti-imperialist, along with revolutionary thinker Ali Shariati. For several years, he turned Iran into a scientific and industrial power. He began to develop nuclear research in order to develop a new type of nuclear power plants that could be replicated in the third world countries and ensure energy independence for all mankind without resorting to coal, oil and gas.

One can hardly understand how the Iranian parties are dissimilar. Rafsanjani and Khatimi are clerics, and Ahmadinejad is the Guardian of the revolution. During the Iraq war, the Guardians saved the country at the cost of their lives, while the clergy used their privileges in order not to send their sons to the front. The clergy has enormous wealth. Rafsanjani, for example, is the richest man in the country, while the Revolutionary Guards come from the people and they lead a Spartan lifestyle. For 8 years, the West was not mistaken, considering Ahmadinejad to be its enemy, but he mistakenly believed that this leader, both mystical and anticlerical, expressed the will of religious ministers.

In response to Ahmadinejad’s revolutionary appeals, the West put forward claims against the Iranian nuclear program and used the UN to ban them from enriching uranium, whose reserves in the country are enormous. Thus, the country was deprived of the opportunity to use its own resources and forced to sell this valuable metal at low prices. They established, either with the help of the UN Security Council or unilaterally, a series of sanctions, unprecedented in historyto strangle the country. In addition, they conducted a propaganda campaign, the purpose of which was to present Ahmadinejad as a dangerous visionary. Finally, in 2009, with the help of Rafsanjani and Khatami, they tried to make a color revolution in Iran.

Everyone remembers the deliberately false translation of one of his speeches in order to convince the public that he wants to destroy all Israelis (Reuters has spread false information that he allegedly intends to erase Israel from the map). Or the falsification of the Congress on the Holocaust, the purpose of which allegedly was to show how the West is destroying spirituality in its countries and creating a new religion in relation to this historical fact, as well as instilling the idea that, despite the presence of rabbis in it, He denied the Holocaust, not counting the allegations that he discriminated against Jews.

The team of Sheikh Rouhani represents both the interests of the clergy and the bourgeoisie of Tehran and Isfahan. She wants economic prosperity, and she is not worried about the fight against imperialism. The phased lifting of sanctions will allow it to win broad support from the people, as the Iranians, for the time being, view this agreement as a victory that will raise the standard of living in their country.

As for the European powers, they continue to pursue their goals. The plan of attacks by President George W. Bush envisaged the destruction of Afghanistan, then Iraq, then at the same time Libya and Syria (through Lebanon), as well as Sudan and Somalia, and it should end with Iran. For them, the sanctions against Tehran were, under a dubious pretext, just a means of weakening it.

Muammar Gaddafi was mistaken, believing that America’s hostility against him was due to his political convictions. The only driving force that led George Bush to make a decision was geopolitics. In 2010, Libya became an ally of Washington in the “global war against terrorism” and opened up the domestic market to American transnational companies, which did not prevent it from being considered a dictatorship and turning into ruins under a hail of bombs. So Iran, having become an ally of the United States, will not protect itself from their aggression.

It will take four years and Iran will completely forget about the dream of Shariati and Khomeini and will focus on its national interests. He will abandon the Arab world and will turn in the direction of the member states of the Organization for Economic Cooperation (Turkey, Iran and the whole of Central Asia) in order to do business only. Gradually, he will reduce his military and financial assistance to Syria, Hezbollah and Palestine. And when Tehran deprives itself of the ability to defend itself, Washington will again come into conflict with it.

Ctrl Enter
Noticed oshЫbku Highlight text and press. Ctrl + Enter
We are
Geopolitical mosaic: Syrian opposition decided to participate in the “Geneva-2”, and John Kerry explained to the world community that Americans are not blind and not stupidIranian parliamentarians set up Ahmadinejad?
7 comments
Information
Dear reader, to leave comments on the publication, you must to register.