Food security of the Russian Federation. Successes and failures. Part of 3. Dry residue

December 14 2013
25
We will complete the analysis of the situation in the CX RF, namely, we consider food security Based on the above facts and additional information from Rosstat. 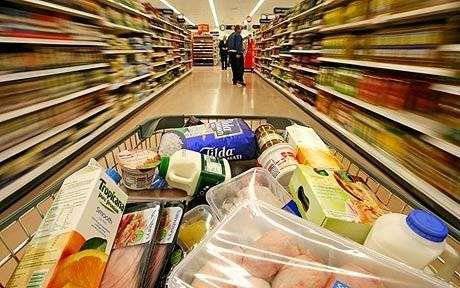 The first thing you want to pay attention to is how this issue is usually raised on the forums. The first comment usually has the following content (swearing and insults filtered): "Russia cannot feed itself!", then someone disagrees, pointing out that there are no 15 years for problems with products in the country, after which the thesis changes, and a message follows: "Go to the store, there is one import, nothing domestic !!!", which usually follows an answer like: "Well, I went, I hardly found Italian pasta, several varieties of imported cheese, beer, fruits, sweets, etc., and for each product there was a domestic equivalent of the same or lower price (sometimes higher)" and here comes the killer argument from the point of view of the all-proppoler: "Russia imports 50% (in different editions of 60%, 65%, 70%) food", after this discussion falls into demagogy on the topic: "And in Soviet times ... !!" or "Here in Europe ... !!!"

Usually, the problem on forums, in agitation or interviews is intensified by creating in the citizen’s head one big inscription: "IF ANYTHING WHAT, WE WILL ALL BE DIE WITH HUNGER !!!" But, forgive me, if this is not about some kind of global conflict such as the Second World War or the wild crop failure of everything and everything (which, of course, it’s possible to imagine in the territory of the Russian Federation, it’s still difficult), it’s not possible to talk about hunger. I do not deny the fact that, if possible, if not all, then at least the greatest possible amount of products should be produced in ourselves and by ourselves, but in many articles we will inevitably lose to the warm countries of Central Asia, America and Europe, from importing the same bananas we will never refuse, unless one of the tropical countries wants to become part of the Russian Federation.

Another idea that is actively promoted in society by "certain forces" is that, say, our products are methodically squeezed out of the Russian market, imported goods have already replaced them, which gives reason to say that Russia is excessively dependent on the will West and forced to clean his boots, simultaneously appeasing all the beneficiaries of this position. In other words, the picture in the eyes of Russians should look like this: 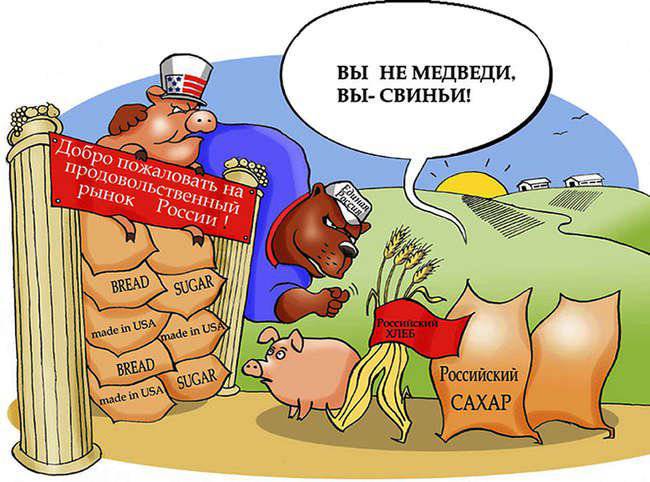 If you look at things from the man in the street, and stupidly scan product barcodes in a supermarket or read the manufacturer’s address, you can discover the fact that almost all sneakers, mayonnaise, soda, pasta, ketchup, chicken, dumplings and t .d produced somewhere in the Moscow region, in Nizhny Novgorod, in Krasnodar, in short, in one of the cities (districts) in the territory of the Russian Federation. Accordingly, we need to analyze not the percentage of foreign companies' products on the shelves, but the total volumes of raw materials for the manufacture of the same ravioli. True, the FedStat does not agree with me and says that the share of imports in the commodity resources of food retail in recent years has been fluctuating around 33 percent. 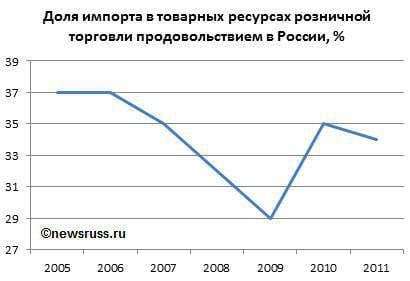 In the previous notes, they often shouted about meat consumption per capita, and on forums they constantly try to compare convenient “them” figures with tsarist Russia or the early / late USSR. True, no one takes into account that the culture of consumption of a particular product changes over the years, though not so much, but in the 60-100 section of years — quite noticeably. And about the export / import conjuncture in general is not necessary. All this can be seen in the picture below. 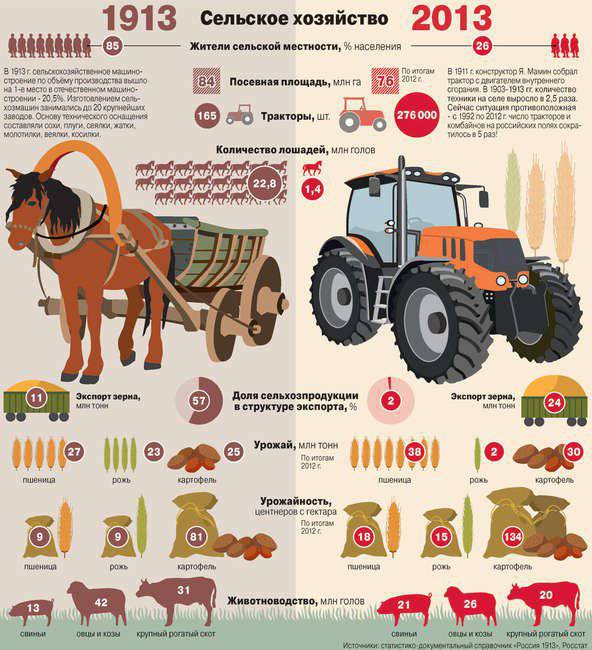 Another important point is the quality of imported products. We all remember the "Bush legs" or Chinese cucumbers, which are appetizing in appearance, and in terms of utility - exactly the opposite. And since domestic production is easier to control, even with a decrease in the share of imports, product quality should increase.

Before starting a direct analysis of the food security of our country, I suggest looking at how we ate, starting with the 1990 year. Below is a graph of the consumption of basic foodstuffs in Russia per capita, the level of 1990 consumption of the year is taken as 100%. (Source: Federal State Statistics Service, http://www.gks.ru/). 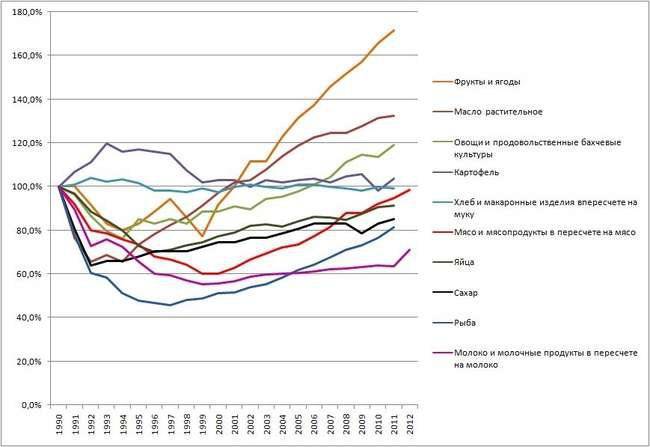 The failure of the nineties of the last century is clearly visible. In relation to 1990, meat consumption decreased by 40%; 54,4% fish; eggs on 30%; milk on 44,7%; vegetables on 23,6%; fruit on 22,9%; vegetable oil on 34,3%; sugar on 36,2%. And only the consumption of bread with pasta practically did not change, the consumption of potatoes even increased by 19,8%: people tried to somehow compensate for the lack of more expensive foods in the diet.

We now turn directly to the analysis of our dependence on imports. Below is a graph of% of imports in total consumption of products, negative figures for grain show% of exports of total grain production. (The Goskomstat website has available balances of food resources only for grain, meat, milk, eggs, potatoes and vegetables). 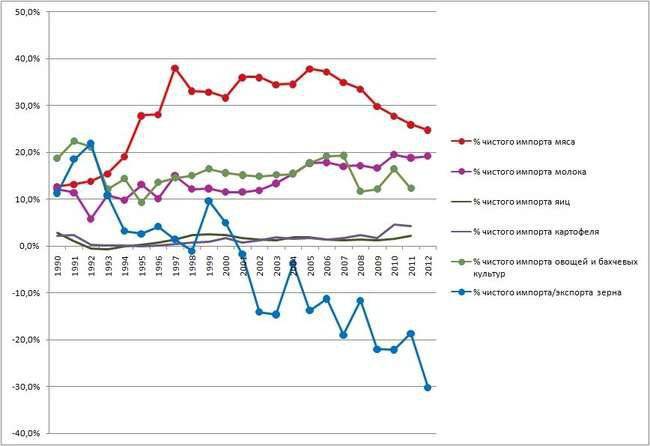 From grain importers in 2001, we became exporters. Russia is steadily (as far as possible in crop production) increasing net grain exports, which amounted to 2012 mln. Tons in 21 year.

Since the largest share of imports in our meat, consider it in more detail. The maximum share of meat imports for the period under review was in 1997 and amounted to 38%, 2005 reached 37,8% very close to this figure, after which the share of imports declined and decreased in 2012 to 24,8%. Below is a graph of production and net imports of meat and meat products in terms of meat in absolute terms. 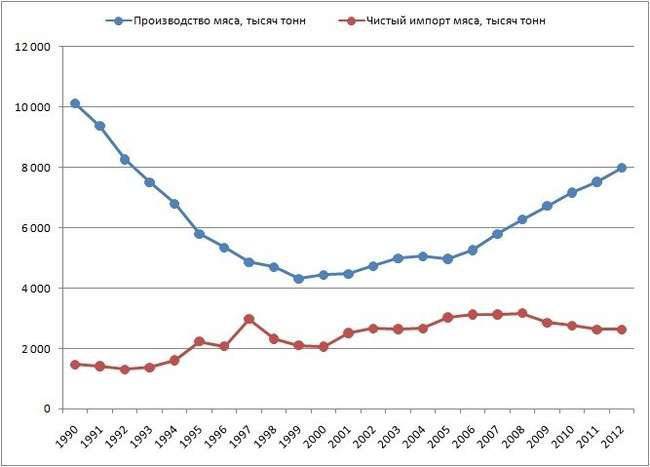 It is clearly seen that meat imports are stagnating, and its own production has been growing since 2000. For greater clarity, below is a graph of growth in the production and import of meat, where the level of 2000 of the year is taken as 100%: 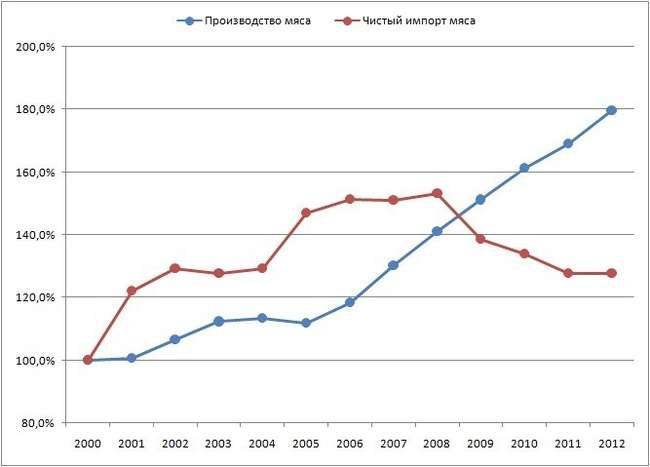 No economic crisis prevented us from increasing our own production, from 2000 to 2012 it increased (production) by 79,6%! Finally, the last graph, which shows the per capita consumption of meat with and without imports: 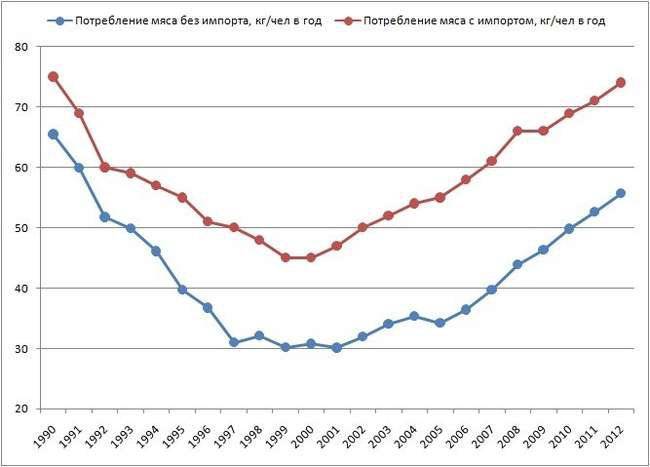 Looking at this chart, you can see that in 2009, the per capita consumption level only due to own meat production exceeded the total consumption level of the year, along with import, of meat. In the 2000 year, the level of consumption per person per year only due to own production exceeded the total level of consumption of the year 2012 along with import. Does anyone remember the “tension” with meat in 2005 year? Me not. And now we produce as much meat as we consumed in all at 2005. The number of “mouths” during this time has changed, but only slightly. Accordingly, if all imports are cut off at once, then nothing terrible will happen - we will roll back to the level of consumption of the 2005 of the year ... How prices will behave in this case is another question, but the fact that we will not die of hunger is a fact. It would not be superfluous to point out that no one here is going to cut off meat imports like this, exactly like our import partners do not want to do this.

Based on the above, we can safely say: "Whatever all the pro-fighters would shout, we certainly will not die of hunger. On the contrary, how could we not become fat with such tendencies!"

1) In the Russian Federation there is a dependence on food imports, but its share in recent years has been steadily decreasing or stagnating with an increase in consumption.

2) Of the main indicators mentioned in the "Doctrine of Food Security of the Russian Federation", only the share of meat products imports does not substantially correspond to the parameters, otherwise the situation looks very good, although there is much to strive, for example, to increase domestic production of dairy products and vegetables.

PS Since the article consisted of three parts, then, accordingly, please leave all comments here. I am very important constructive criticism of my work. Readers can also suggest a topic from this area for further discussion. Thank.