Food security of the Russian Federation. Successes and failures. Part of 1. Battle of the harvest

December 14 2013
47
There are many different rumors about our land that we will not feed ourselves, and if something happens, we all will have a kirdyk, respectively, we need to urgently do justice through a revolution. And such an ordinary meme, as "the rapid decomposition of agriculture as an industry," many have already rubbed corn on the ears.


In this article, we just look at the figures provided by Rosstat for the period from 1999 to 2012. It must be said that the topic turned out to be very extensive, and in order to fully cover it, it would be necessary to divide it into three parts. 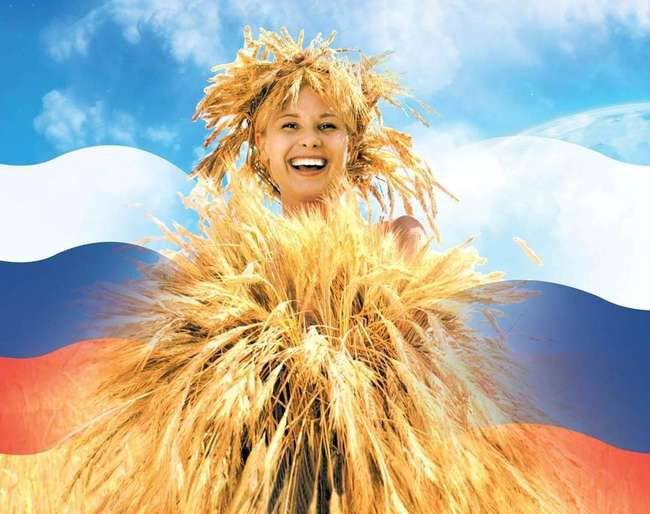 During the election battles, bloggers known to us all organized “exposing” research in various areas, criticizing everyone and everything and prophesying the imminent end of the world if nothing changes. The elections were held, and stuffing remained and periodically pop up in online discussions on the topic "Who Lives Well in Russia." One vivid example of such “enlightenment of zombies” was the action in the St. Petersburg metro called "Good car of truth". The essence of the action was to glue all the cars of one of the subway trains with agitation with various charts and comments to them. Naturally, judging by the graphs, the cardiogram of our economy and in general of everything and everything tends to an even horizontal position with a lingering “piiiiiii” sound. 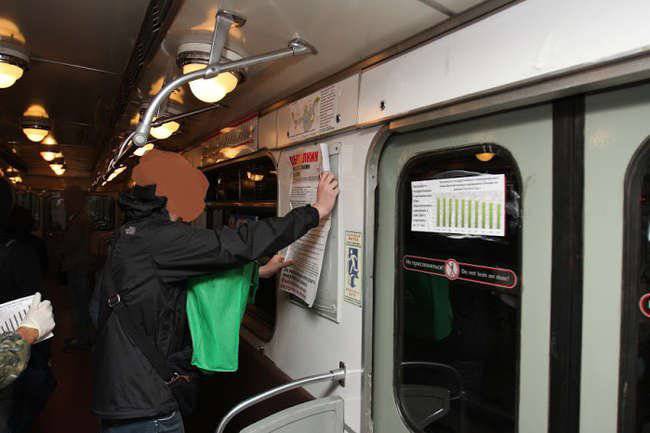 Especially amused by the way they assessed their activities based on reviews on the Internet, I quote: "According to the network, reviews of grateful metro passengers sound mostly like this:" Thank you very much, dear Naganoff and unknown activists of DSPA, I was befuddled with commercial advertising in the metro and was already thinking of buying a new and completely unnecessary product for me, but I read the posters in the Good Full Wagon of Truth. I learned a lot about my country and realized that it was impossible to continue this way, but in the meantime, after reading your posters, I drove my stop and, returning in the usual wagon, I decided that tomorrow I'll go to m wind and glue something, because the truth, unlike advertising, is so cool! "

I must say that many of the theses cited on the campaigns have already been broken to pieces both on this resource and on many other sites, some are still waiting for their turn.

Here is one of the “masterpieces” of that “Wagon of Truth”, which concerns agriculture, although it would be more appropriate to change the last word for another - a half-truth. So, we look:

I must say that the numbers and data are not particularly falsified, and they are real. But only to give figures in isolation from the general dynamics - a favorite method of demagogues, hamsters and just people with "active citizenship". For example, as I mentioned in the previous notes, they may shout that the population over the past 13 years has decreased by 6,5 million. People don’t lie if 2012 is taken away from the 1999 year, but that fact that the rate of natural decline, as well as the rate of reduction of the total population of the Russian Federation, declined all this time, the birth rate grew, and since 2010, the population of the Russian Federation began to increase, and has already grown by 1,3 million, they do not care. Prices for roads in Sochi or any other place are also calculated, for example, at a junction in Moscow, they take the cost and length of the road, and then divide one by the other and get a transcendental figure, under a “billion” per kilometer, while they are not the presence of bridges, interchanges, underground passages, difficult terrain, permafrost and other things, also ignores the fact that in most western sources the price of a road is given with the price of land for which this road passes and other expenses not connected from the very close Asphalt, but this does not prevent them from comparing the West and the Russian Federation.

Let's correct this "mistake" of our "truth-keepers" and consider the situation with the sown areas in the complex.

The material is submitted in such a way that after reading "the acreage decreased", and the first thing that comes to mind to the reader is the thesis: "We grow fewer products." Let's see if this is true.

This is a graph of the gross harvest of cereals and leguminous crops, and the proportion of wheat is also visible next to it. By the way, in all graphs in this note there is data for 1990 year, as a guideline for the USSR, the truth must be borne in mind that this reference point is dependent on such unpredictable things as the weather. But for this we have a very poor 2010 year, respectively, taking into account both parameters, we can understand how things actually happened in the 1999 year, and in the following ones. 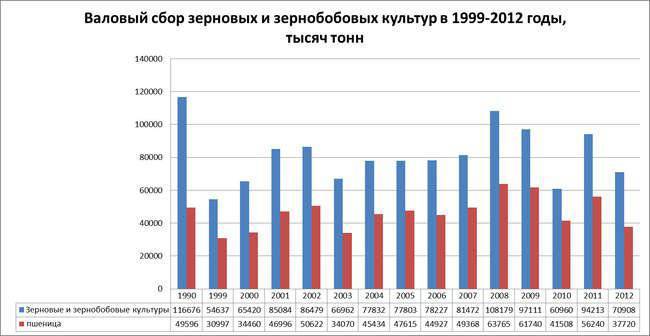 And what do we see? With the reduction of acreage, the volume of production is not something that has not decreased, but doubled in the super-fertile 2008 year and never fell below the 99 level of the year, even in the most lean years, although 1999 had a fora in 9,5 million hectares! And if we compare it with the Soviet 1990, then the 1999 had a complete failure - a two-fold drop. By the way, judging by news from the fields, the 2013 year will once again disappoint our Pozzreots.

Now let's go through other types of agricultural products, not only cereals and legumes, but also some vegetables and industrial crops.

And the first in line we have buckwheat and rice. 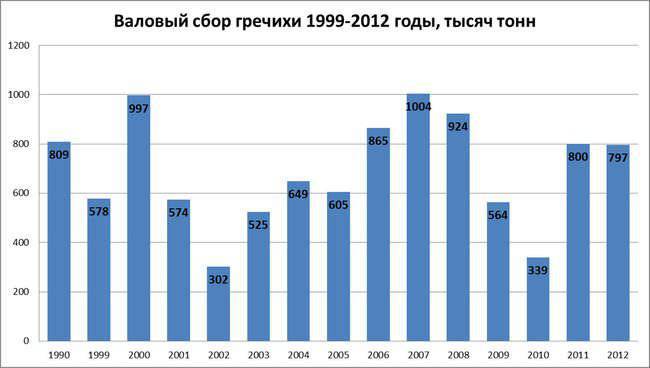 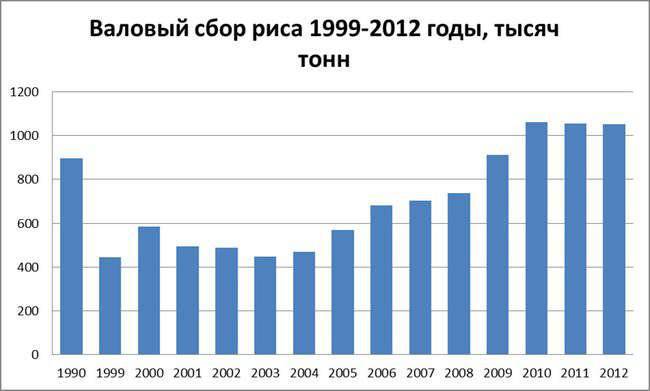 Both there and there we see that, in terms of gross volumes of the collection of the Russian Federation, it was equal to that of the USSR, the same can be said about rice.
Next, look at the fees of potatoes. Potatoes - the second bread. It seems that Catherine still spoke out about this when she tried. So the need for it (not in Catherine, in potatoes) is always high.

As you can see, potato harvest volumes are stable throughout the entire time.

Next we have vegetables (potatoes are not included). Absolutely empty in terms of caloric content of the product (although there are vitamins there), which speaks only about the diversity of the table. How can you do - you will not die of hunger, but with vegetables - more fun. Thus, the growth of the harvest of these "excesses" may well indicate some of our prosperity. 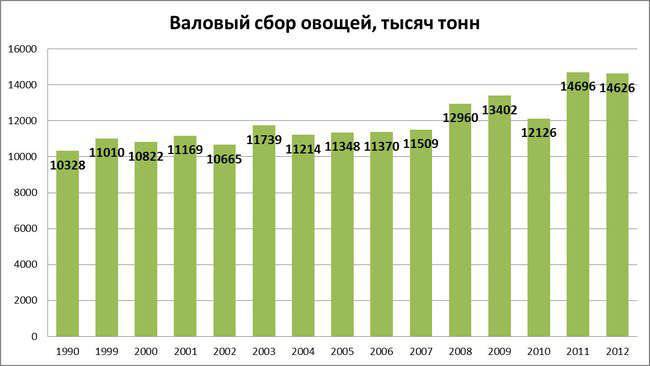 And now look at the melons. Frankly, surprised. Maybe nitrates in watermelons pour Nemer? Painfully significant growth. However, in the Soviet era, collective farm tycoons were doing it with might and main. In general, a mystery. But the watermelons are full, it's true. 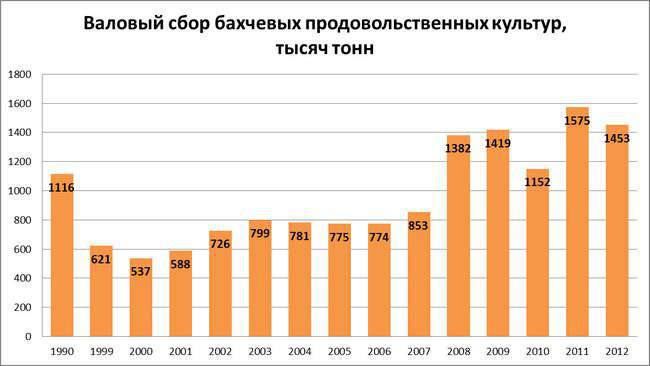 Based on the above graphs, we can conclude that the reduction in acreage did not lead to something tragic, since we are seeing an increase in the collection of main crops. Remember how we are in the classroom stories talked about the "unkeeped peasants in Russia" who were engaged in extensive farming and practiced such a method as the "three-field", while in Europe they were already using the intensive method, i.e. increased crop yields? So let's look at the yield of the same wheat or vegetables in Russia over the past 13 years. 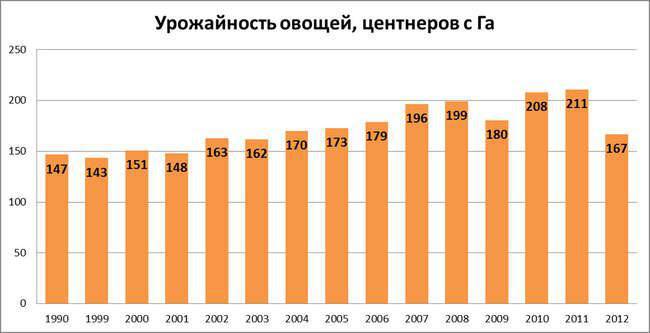 As we can see, the yield is growing, and on average has increased by 25-35% for the main types of crops (data can be checked in the GCS database), which is good news. The acreage has indeed declined. How do you make the farmer sow more? Gosplanom, or what? Or maybe the NKVD-GPU-ChK arrange in the fields? This is when the Soviet Union there was a plan for seeding. And now capitalism and the new rules of the game. For ten years, such conditions have been created that farmers buy more productive varieties of grain, more productive equipment, enough money for reclamation. And gradually everything "flooded" up. And the data of the State Statistics Committee, which for some reason are not given by all propals, confirm this fully. I personally have no doubts: by the end of the next five-year plan, the main indicators of the Russian Federation’s C / X will double with respect to 1999.

Now look at the number of vehicles in the industry. Based on the above information, we can say that the current indicators of gross yield and yield are quite comparable with those of Soviet times. Accordingly, if the equipment of those years was working on the fields now (this is me about efficiency), then the fees would directly depend on its - technology - quantity.

But that's what we see. 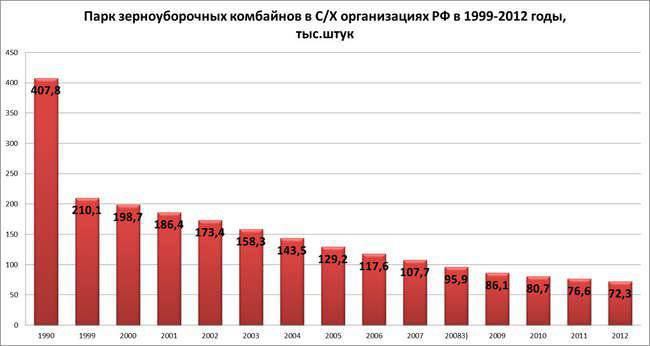 We see a “catastrophic” drop in the number of all types of agricultural equipment, I don’t argue that this isn’t quite good, but knowing that the volumes of fees or crops do not suffer from this, I can confidently say that the fleet of agricultural equipment in Russia is antediluvian, but on the contrary, in recent years it has been seriously modernized, if I am wrong, then it means that we dig up the fields with the help of horses, and we harvest wheat with a sickle.

conclusions:
1) The current main indicators of the agricultural sector of the Russian Federation are comparable to those of the USSR, but still slightly lagging behind.

2) In modern Russia, harvest harvests are increasing not due to an increase in acreage, but due to modern technologies for increasing yields.

3) The park of agricultural equipment in Russia is almost completely updated on the same equipment, but with great efficiency.

In the next part we will talk about another industry with / x, such as animal husbandry.

PS Since this article is just one part of the three, I ask you, dear readers, to rate the article, and all of your constructive remarks and constructive critic to place in the comments to the last (third) part. Thank.