In the Russian Navy, the best submarines, ships, military units, tactical groups and formations are identified. 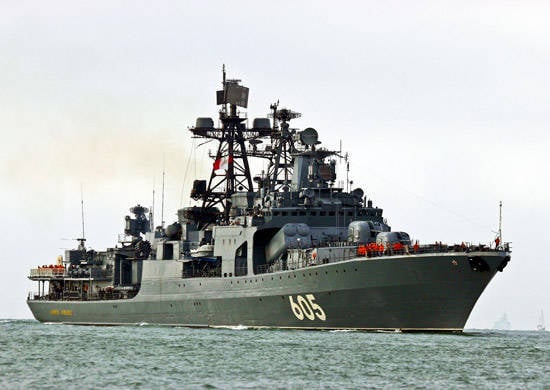 At a meeting of the Military Council of the Navy Fleet (Navy) of Russia, held in St. Petersburg, the best submarines, ships, units, military units, tactical groups and formations that took first place in 2013 for the prize of the Navy Commander-in-Chief were named.


Thus, in competitions of strategic-purpose missile submarine crews (for the destruction of ground targets with ballistic missiles fired at ground targets), the St. George the Victorious Submarine atomic cruiser of the Pacific Fleet became the best in the Navy.

The best among multipurpose nuclear submarines (in competitions for the destruction of conditional enemy ships with the execution of a torpedo attack by a squad of warships, a convoy, an amphibious assault) was the nuclear submarine cruiser with cruise missiles Tver.

In the fight for the prize of the commander-in-chief of the Navy between the 1-2 rocket-artillery ships of rank (for the destruction of conditional enemy ships with the execution of rocket firing at naval targets) defeated the destroyer “Quick” of the surface ships of the Pacific Fleet.

In contests between tactical groups of 1-2 ships of rank (for destroying sea targets or suppressing coastal targets, repelling attacks of enemy air aids with artillery firing at sea, coastal and air targets), the naval strike group of the Northern Fleet anti-submarine ships in the composition of large anti-submarine ships (BOD) "Admiral Levchenko" and "Severomorsk".

In the dispute over the prize of the commander-in-chief of the Navy between the formations (tactical groups) of ships (to repel enemy air strikes with missile and artillery anti-aircraft fire), the first place was taken by the detachment of warships connecting surface ships of the Pacific Fleet on the destroyer Fast, BOD Admiral Vinogradov "And" Marshal Shaposhnikov. "

In 2013, competitions were also held between tactical groups of missile boats (to destroy enemy ships and to execute firing at sea targets). The first place and the prize of the commander-in-chief of the Navy was won by the ship's shock group of the Black Sea Fleet (BSF) missile boats brigade as part of the P-60 and Ivanovets missile boats.

The Priazovye Black Sea Fleet ship has been declared the best special-purpose ship.

Among tactical groups of mine-sweeping ships in competitions on mine support of strike forces of the fleet with integrated use of mine weapons, the ship-sweeping group of the brigade of surface ships of the Pacific Fleet in the composition of the basic minesweepers "BT-100", "BT-114", "BT-232" took the first place ".

The 72 th separate coastal missile regiment of the Pacific Fleet became the best coastal missile unit in competitions for destroying the ships of the conditional enemy with missile firing at sea targets.

In fire training competitions between battalions of marines (air assault troops), the air assault battalion of a separate brigade of marines of the coastal troops of the Black Sea Fleet defeated.

Chernomoretsy became the best and in competitions between parts of air defense tactical training with the implementation of rocket firing at air targets. The anti-missile regiment of a separate brigade of marines of the Black Sea Fleet has been declared the best.

Among the artillery units, the best in the Navy in shooting and fire control with the fulfillment of fire missions was the self-propelled artillery battery of the marine battalion of a separate regiment of the Pacific Fleet.

We are in Yandex Zen
"George the Victorious" won the right to be called the best rocket carrier of the Navy
In St. Petersburg opened a naval salon
21 comment
Information
Dear reader, to leave comments on the publication, you must to register.