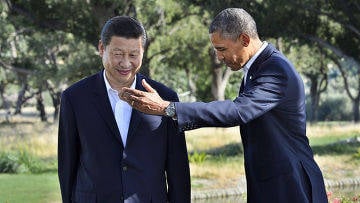 John Mirshaymer (Professor, University of Chicago, USA): Can China come to greatness by peaceful means? My conclusion is: no, it cannot. After America turned into a regional hegemon, it began to actively prevent the emergence of strong players in other places. She likewise applied to Germany, the Soviet Union, and Japan. America did not want her to have a strong state from another region near her, this is the essence of the Monroe doctrine. If someone still dared to challenge us, we expelled him, and the attitude towards China would be the same.


China is a brilliant country history. In its transformation into a world hegemon there is an iron logic. And China can put forward its own “Monroe Doctrine”: becoming the most powerful country in the region, China is not interested in allowing America into its “patrimony”.

And really, is the transfer of a strategic focus to Asia - not an attempt to limit China’s growth and prevent it from becoming a regional hegemon? Therefore, the war between China and the United States will be difficult to avoid. The conflict is quite likely - because of Taiwan or the Korean Peninsula. The US hypocrisy is that America declares tolerance towards China, but in reality will not be able to allow its growth and development. Ultimately, the scenario in which China and the United States meet on the battlefield is quite likely.

Yan Xuehtun (Professor of Tsinghua University): As a realist, I largely agree with Mirshaymer. I agree that both China and America want to be No. XXUMX in the world, and I share the view that China should act responsibly and prudently, refrain from loud actions and statements. However, our positions differ on the strategic choice of China and America. It’s not a fact that China will follow the same path as its rival, and besides, America has other options besides containing China. Perhaps the US has even more of these strategy options than China on its path to world leadership.

Xi Jinping noted that diplomatic relations with neighboring countries should create favorable conditions for the revival of the nation. He stands on the position of deepening peaceful cooperation with neighbors, in terms of the economy, he is promoting the ideas of the “Sea Silk Road” and the “economic belt of the new Silk Road”. This approach is different from what it was before; it is something completely new. Previously, our foreign policy has always felt the superiority of the United States. When America had conflicts with our neighbors, we always considered it. Where do we get now friendly neighbors?

China believes that in order to facilitate interaction, we should strive to ensure that partners have common interests, and not mutual trust at all. Therefore, even if something of a conflict of interest does occur, it will be possible to take preventive measures together and prevent the occurrence of a real conflict. Common interests, not mutual trust, are the basis of cooperation.

How can China achieve the friendship of other states? The path to making real friends is mutual assistance. China should pursue a policy that will allow friendly countries to benefit from the relationship, and not just think about how to cash in on a partner. This is the so-called “spreading their good relations to neighboring countries” and “the common fate of all mankind” (slogans that are well-known after the 18th CPC Congress - note of the translator).

China should be a kind of "virtuous ruler." However, following the ideas of the “common fate of all mankind” is the modern version of the “virtuous government”. From the point of view of offensive realism, morality is useless, however moral realism considers morality as one of the constituent elements of the real power of the state, because it is thanks to it that you can deepen relations with allies, abroad to win new friends, and within the country to get the support of the people.

In the 50 and 60 of the last century, China was very weak, but was actively involved in military conflicts. As economic growth progressed, China less and less wanted to resort to help. weapons, and China has become the most peaceful of the major powers of the planet. Thus, China’s propensity for a peaceful elevation was manifested, this is where it began.

However, the pursuit of peaceful exaltation does not mean that China will patiently demolish anything, or is afraid to use weapons. The idea of ​​Xi Jinping about the existence of a "limit" in politics is just about that. The Chinese foreign policy course now has both basic principles, and a lower bound; its own features have been formed. Proceeding from all this, I do not exclude that China may be involved in a war, such a risk exists, but I do not deny that China has a chance to come to greatness by peaceful means.

There will be no open war between China and America, if only because, firstly, nuclear weapons exist. Since atomic bombs have prevented a war between America and the Soviet Union, then, naturally, they will be able to keep America and China from war. Secondly, globalization. The degree of economic interdependence between the countries of the world is now much greater than before the First World War. At the same time, the roles that globalization and economic interdependence play are slightly different. Globalization increases the degree of sensitivity towards mutual dependence, but at the same time it reduces the degree of vulnerability of such relations. As a result, both sides are not only very cautious about the issue of declaring war, but they are not very eager for it.

Ctrl Enter
Noticed oshЫbku Highlight text and press. Ctrl + Enter
We are
American professor: By the 2035 year, China will become a threat to Russia and America, and the powers will create an anti-Chinese alliance ("Huanqiu Shibao Newspaper", China)The failure of the goals of the Chicago summit of NATO: Germany has ceased to understand the role of the alliance
114 comments
Information
Dear reader, to leave comments on the publication, you must to register.