Ordinary fascism. Solzhenitsyn in the context of the history of the twentieth century 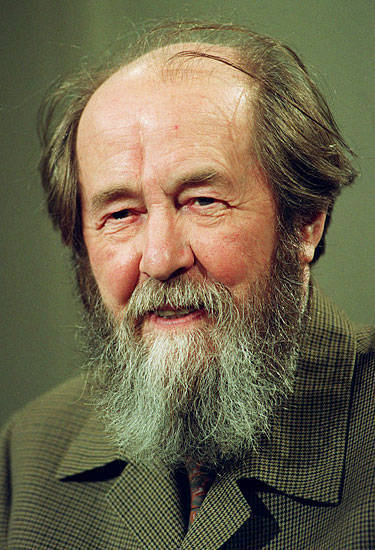 Criticism, as well as apologetic, Alexander Isaevich Solzhenitsyn is equally flawed - those who praised him did not clearly understand the tasks of the writer, and those who debunked him reproached the author for not complying with those who did not understand him.


A social incident arose because Solzhenitsyn was defended by liberals and democrats from totalitarianism, but Solzhenitsyn himself was not a liberal and was not a democrat. He was considered the enemy of totalitarianism (conditional bogey, invented during the Cold War and crossed the lines of different cultures, dissimilar to each other), and subsequently horrified that Solzhenitsyn himself was intolerant and prone to dictate. How can a man who, in essence, is an example of totalitarian thinking, can fight against totalitarianism? The parodic writer Voinovich brought Sim Simic Karnavalov, an ecstatic dictator, like Khomeini, who longs to become the leader of a conditional Orthodox empire. But this caricature is far from reality: Solzhenitsyn was not a particularly religious man, his activity was completely secular; attributes of faith were conditional - as well as paramilitary french.

The nationalism of Solzhenitsyn, which his dissident fans of Jewish nationality tended not to notice or explain historical realities (indeed, there were plenty of Jewish commissars), became egregious in the writings of Solzhenitsyn's friend - Shafarevich, and then flared up brightly in a book unexpected for many - an epic of its kind - "Two hundred years together." Many Solzhenitsyn adherents were at a loss: how can a fighter against Stalinism and camps be an anti-Semite? Well, not quite explicit, not zoological, but ideological - but still, how is this possible? Nobody succeeded in matching the image of the author of the “Archipelago” and the image of the author “Two hundred years together”. Equally, it failed to combine the tendentious historical analysis of the Red Wheel and journalism like Letters to the Leaders and How to Equip Russia. It seemed obvious that one who knows about the absurdities of the State Duma of the pre-war era cannot compose provocative and irresponsible texts; however composed.

The humanism of the writer (and it is assumed that the Russian writer is necessarily humane) raised doubts; Alexander Isaevich supported several inhuman regimes - Pinochet, Franco, etc., justifying his actions by the fact that communism is even worse. It must be said that theoretically it would have been possible to withdraw from communism otherwise, without joining Pinochet and Franco, but Solzhenitsyn preferred an active position. A short friendship with Heinrich Belle turned out to be impossible precisely because Solzhenitsyn was not a humanist at all, and Heinrich Belle was a humanist in the first place. Solzhenitsyn had a peculiar love for the Russian people: he encouraged zemstvos and some self-determination of the village, but he also wrote sympathetically about Stolypin. His love for the Motherland and the Russian people was combined with the recognition of General Vlasov, the traitor to the Motherland, who turned weapon against Russia, and who got under the banner of Hitler.

Stubbornly and persistently, Solzhenitsyn showed that communism is the worst thing that can happen on the planet, that any means are good for exterminating communism, including killing Russians by the Russians, but at the same time he opposed the Stalinist camps. Describing the victims of the Stalinist camps and the repression of Soviet power, Solzhenitsyn resorted to exaggeration, distorted facts and figures. The actual data given to them (65 million killed in the camps) differ from the real number by 60 million. Characteristically, with numerous reprints of the “Archipelago”, Solzhenitsyn did not correct inaccuracies and the shocking figures wandered from publication to publication. Of course, this falsification was used in the Cold War and can be regarded as an ideological diversion.

At the same time, it would be unfair to deny the sincere pathos of Alexander Isaevich Solzhenitsyn. Everything that he did, he did by conviction, did passionately and selflessly, giving himself to the service of the idea. He was a passionate and fierce man who defended his convictions. By mistake, his beliefs were considered democratic and liberal. They never were. Solzhenitsyn was indeed a patriot of Russia, but a very special kind of patriot, not at all such a patriot as Minin or Pozharsky. Solzhenitsyn was a traditionalist - but again, in a special way, in the way of conservative traditionalism, which appeared in Europe in the thirties and was embodied in the writings of Jünger, Selina, Pound, van den Bruck, Evola, etc. This trend of consciousness is most fully expressed in Heidegger’s philosophy, and Solzhenitsyn could be called a spontaneous Heideggerian, but more accurately define him as a follower of a conservative revolution, an anti-communist and a traditionalist.

Solzhenitsyn’s beliefs were completely sincere, he served Russia passionately, and criticizing him (as well as admiring him), one should take into account the nature of his convictions. The fact is that Solzhenitsyn was a fascist. The above does not contain an accusation, and the spoken word is not abusive, in any case, I use this word in the same meaning as I apply it to Celine, or Junger, or Evola. Solzhenitsyn’s anti-communism and moderate religiosity are explained not by his Christianity and not by his bourgeois abstract humanism, but by his consistent faith in the national consciousness of the ethnos, due to organization, in the aristocracy of the elite, in the romance of the traditional methods of controlling the masses. He was an ordinary ideological fascist; Russian ideological fascism is a phenomenon as characteristic of Russian culture as the French movement Axion Francaise for French culture. The works of Ivan Ilyin (recently this philosopher was again revered) is another characteristic example of this line of thought. In this sense, the Solzhenitsyn phenomenon is embedded in the history of fascist thought and the fascist romance of the past century and should be evaluated on the basis of this aesthetics. The paramilitary french jacket is akin to the average military uniform that everyone has cultivated from Hitler to Stalin; speech and behavioral archaisms are akin to that pseudo-peasant appearance cultivated by the philosopher Heidegger, who specially ordered costumes reminiscent of the folklore of a Bavarian peasant. Within this aesthetic there is the Solzhenitsyn phenomenon, and this phenomenon is by no means only of Russian, but of pan-European significance. Vlasov’s position turned out to be much clearer for Solzhenitsyn than the behavior of Zhukov or Konev; the Stalinist camps turned out to be many times worse than the Nazi camps - for the banal reason that he was primarily an anti-communist; everything else was derived from the main task. The power of fascist aesthetics in the twentieth century is great: it was reflected not only in the works of Evola and Junger, Solzhenitsyn and van den Brook, but also in the works of Ilyin and Heidegger.

It would be a mistake to isolate the Solzhenitsyn phenomenon from the European perspective of ideological fascism. The value of this aesthetics after the victory over communism has increased. The descendants are given an example of a romantic biography, a passionate ideological struggle, which - like the ideological struggle of Evola or van den Broek - has very specific social ideals. This phenomenon should be judged on the basis of its essence, and not at all from invented (and therefore inauthentic) premises.

Ctrl Enter
Noticed oshЫbku Highlight text and press. Ctrl + Enter
We are
About Stalin and KhrushchevWhat you didn't want to know about England
116 comments
Information
Dear reader, to leave comments on the publication, you must to register.