Unforgivable mistake of Dmitry Kiselev on events in Ukraine 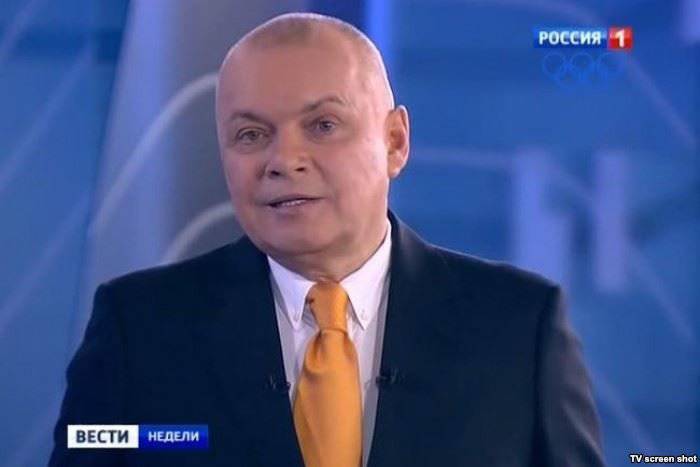 Ukraine is in the midst of an information war for the minds. Each phrase is snapped up for quotes. Almost all central TV channels of Ukraine and even partially Russian-speaking Inter and TRK Ukraina took the side of “euro-mates” with different fanaticism. Ukrainian journalists are already in the western regions chasing the soldiers-conscripts of the internal troops (who are being sent to Kiev), so that they will come to the camera to say that they will not disperse the Maidan and carry out criminal orders, read here. A "New Channel" went even further, launched a blonde with a red glamorous bow through the ranks of the siloviki, so that she seduced with tea, sandwiches and questions about, they say, why they do not go over to the Maidan? Only regional and provincial TV companies in the south-east of the country and some Internet resources and organizations provide resistance to American information technologies on the territory of Ukraine. It is logical and justified that the falling flag of counter-propaganda from Russian and Russian-speaking Ukrainians is picked up by the Russian media. Until recently, they coped with it perfectly. Nothing needs to be thought out and something to prove, because the fact that the Deputy State Department of the United States, Victoria Nuland, walks around the Maidan with the US ambassador and distributes patties to Ukrainian police in a cordon, does not need any special comments. It shows the whole world! But recently (unfortunately for myself as a supporter of the CU and friendship with Russia), I noticed that Dmitry Kiselev made a grave mistake on the Russia 1 channel - on the Vesti Nedeli program on Sunday. As a result, liberals and nationalists choked in the bile: “Russian TV channels are brainwashing their citizens!” And so on.

If you cut these first 5 minutes from the plot of Kiselyov, then you can safely give him a rating of 5+ for objectivity. But all the salt, tragedy and drama of the plot unfolded in this five-minute period, as a result of which all the TS supporters had, sorry for being rude, to put their tongue in w ... y. For those who do not understand what I’m talking about, I’ll explain: in the story, Dmitry Kiselyov confidently indicates that at first there was a pogrom near the presidential administration of Ukraine, where Ukrainian policemen suffered, and the next day, evil cops beat up poor students on the Maidan, whom they set up opposition. Thus, November 30 and December 1 were swapped. On the site "Military Review", many follow the events in Ukraine, so even on this resource in the archive News You can see a completely different chronology. Why not Dmitry Kiselyov to cover such aspects:

- Who and why from the opposition on Friday / Saturday 30 November left students without people's deputies and cover?

- Who gave the order to "Berkut" to clean up the Maidan from unfortunate 30-ti students, thereby blowing up Kiev and taking it to the streets?

- Who then shot the head of the Kiev "Berkut"?

- Why the next day, the head of the presidential administration of Ukraine plays up to the opposition by weakening the security of the office in the form of 18-summer conscripts?

Instead, Kiselev - like a god - decided to change dates and events in some places. And this is despite the fact that today there is an information society in the yard. Didn't even his fellow journalists notice that? Did he think that the opponents of the vehicle would not notice it?

I don’t know how in the territory of the Russian Federation, but if I go to “YouTube” from the territory of Ukraine as of 11 December, the plot of Kiselev’s is in the main window called "Dmitry Kiselev about the dispersal of the Maidan and Vitali Klitschko." Thus, the West makes it clear to the citizens of Ukraine, they say, this is how the Russian media zombies their people! Why Dmitry Kiselev changed the chronology, I do not understand. I wanted to keep in depth the depths of Russia? So people have never been there and will not be "hamsters." And the "belolentochniki" of Russia, and so with the help of the Internet and other TV, as well as living people from Ukraine, it seems they know who, when and who started the first to "soak." It would be better if this plot commented on Starikov or even Fedorov, really. As a result, Kiselev's report scored a record number of anti-likes, and in the orange message “Russian media are lying about events in UkraineBreathed new life. It's sad, because this blow fell precisely on the supporters of the “Russian World” in Ukraine ...

In general, if you take out these 5 minutes for the brackets, then the plot is excellent. What only is a hidden shot nationalist Tyagnibok, where he long before the Maidan frankly admits that in support of Klitschko and Yatsenyuk go for the money. And about the photo session of the Klitschko brothers for the German homosexual magazine "Max" in 2007, and can not speak. But all this crosses the castling of December 1 events with the events of the night of November 30. This is unforgivable in the 21st century, where everything is checked at the household level and checked by the residents of the country where this devil's Sabbath occurs in real time. So it seems that not only the Ukrainian elite play in the giveaway with the West ... How else can you explain the efficiency of “YouTube”? Let me remind you that when entering the “Recommended Videos” page, regardless of the account and interests of the user, Kiselev’s story is almost a third of the screen. I’m almost sure on 100%, if there wasn’t a hoax with dates, then only the supporters of the CU and the fighters of the Internet militia would spread this report to convey the truth about the dangers of association with the EU. 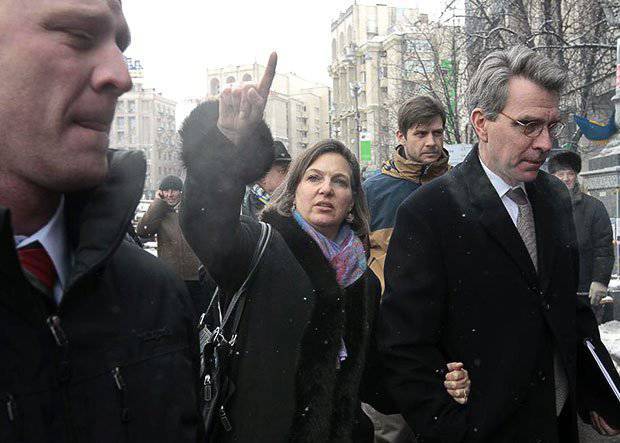 A major US State Department official, Victoria Nuland, with the American ambassador, feels at home in Kiev.

Historical reference: On the night from Friday to Saturday (from 29 to 30 in November), for some reason, not only opposition leaders, but also people's deputies who have immunity leave the Maidan. On the square, according to various estimates, from 30 to 80 students and many journalists remain. After some time, the “Berkut” appears, which was previously called either “Crimean”, or, if you refer to the civilian network “OPORA” in Ukraine (attention, we do not laugh), disguised as Russian special forces who flew by airplanes. "Golden Eagle" begins to crush everything and crush everything. Naturally, the area is promptly and very roughly cleaned - under the flashes of television and cameras. The next day, the whole of Kiev comes out, and on Sunday, December 1 just begin to unfold events near the presidential administration. The head office of the President of Ukraine demonstratively and on the front line are guarded by 18-summer conscripts of the internal troops of Ukraine. They are defiantly, brutally and brazenly attacking nationalists of all stripes, from Freedom to Korczynski. The tractor is involved in the show, which, as you know, was used in many other revolutions of civil disobedience in the world. Even fotozhaby appear on the network. Soon comes into action "Berkut", which delays bullies. But the next day, the whole country, in the best Hollywood tradition, finds out that the detainees are for some reason middle-aged and older people. Here is the wife and mother of three children crying in front of the cameras that detained the sole breadwinner, husband, trucker, and the next day everyone excitedly discusses the bloody regime on the buses, and who mentally and who physically join the sabbath.

The mother of three children was left without a breadwinner: he is being convicted for resisting the "Golden Eagle".

Fool it is clear that the "Berkut" tied onlookers and evroormantiki with Maidan, and not the militants. But why and for what purpose was it done? There is a primitive liberal answer: “In order to intimidate society and not allow sprouts of civic activity to rise. But for some reason I think that Western political consultants not only manage news agencies in Ukraine, but also, perhaps, indirectly, departments. Looking at how the Victoria Nuland jeep cuts through the snow-covered government quarters of Kiev through the police cordons, I understand that we are occupied. So, in the near future there will be more Hollywood pictures. I only want one thing: that the Russian media would not play up to the subtle American poker, but play chess.

Conclusion: I don’t know from which hangover Mr. Kiselyov so openly and clearly changed the chronology for the viewer. Let's call a spade a spade: he went to the deception. And the blow fell on the Russian audience in Ukraine. It is a fact! Euromaidans have an iron argument in discussions at work, at school and among Russian-speaking friends.

- Vasya, well, you should agree, at first “Berkut” beat the children at night on Friday, and only then the scuffle at the prezik on Sunday, eh? We still discussed with you on Saturday at the godfather?
- Well, there is.
- And you think there is justice and truth in Russia? And you still did not believe me that they throw Belarus on the CU on a number of goods?
Silence…

Ctrl Enter
Noticed a mistake Highlight text and press. Ctrl + Enter
We are
What ships of the Ukrainian Navy raised the flag of St. Andrew (photo review)What you didn't want to know about England
136 comments
Information
Dear reader, to leave comments on the publication, you must to register.