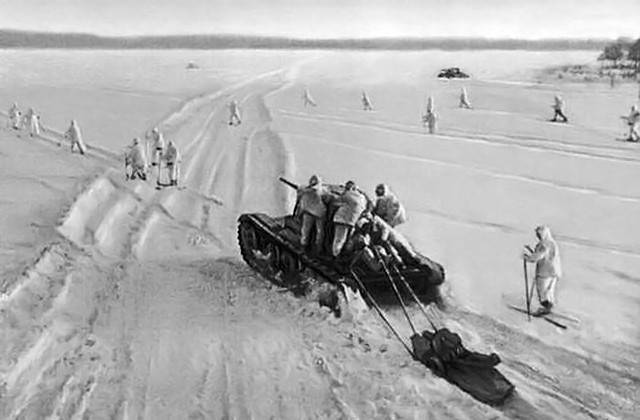 In the battle under the capital, the Soviet Stavka conducted a brilliant operation to defeat the Germans for the first time during the Great Patriotic War.


On December 5-6, the Moscow counter-offensive, the first successful operation of the Red Army in the Great Patriotic War, began. Within a month and a half, the Germans were driven back to 1941 — 100 km from Moscow. After this defeat, the Wehrmacht forever buried the idea of ​​a massive offensive in the central sector of the front.

The tactics and strategy of the Moscow counteroffensive are described in detail in the military literature on both sides. This article will focus on the important details that contributed to the first victory of the Red Army in the Great Patriotic War - a victory that dispelled the myth of the invincibility of the Germans.

For starters, about an important circumstance that often eludes the view of military analysts: this is an unprecedented feat of the Red Army during the retreat of the summer - autumn of 1941. By November, it almost ceased to exist, suffering huge losses in 5 million people killed and captured. However, these victims made it possible for the Germans to avoid the approach of 1941 to Moscow in early October, when the defense of the capital was not yet properly prepared. In addition, the German units approached Moscow badly beaten.

November 16, the balance of power near Moscow was as follows: 233 thousand German soldiers and 240 thousand Soviet. By tanks the Wehrmacht had a tremendous advantage - 1300 cars versus 500 for the Red Army. The Germans had about one and a half times more field guns - 1900 barrels versus 1250. The Wehrmacht command was sure that the Germans would be able to break through the Soviet units: after all, before the Red Army was able to resist the Germans only with a manpower ratio of 1: 5 (that is, the Germans in theory were ready to meet and defeat 1 million Soviet soldiers). In addition, until the winter of 1941, the Red Army could not oppose anything to the Germans' crown tactics - offensive tank wedges. But in November near Moscow, the Wehrmacht unexpectedly stalled. So, the German advance was only 4–4,5 km per day (from November 16 to December 5–6, that is, 20–85 km in 90 days). Previously, these figures were an average of 8-12 km per day. What was the reason for the failure of the German offensive?

For the first time since the beginning of the war, the Soviet leadership was able to restore order to the railways. And this immediately affected the results. For example, at the end of November, the distance between Bugulma and Khimki, which was equal to 1250 km, was overrun by echelons with troops, equipment and supplies for three days, that is, with an average transportation rate of 400 km per day. Long-distance transportation, for example, from Krasnoyarsk (4000 km), was made at a speed of about 500 km per day. For comparison: in September - October, the pace of rail transportation was 200 — 220 km per day. Do not forget that at that time, trains and railways were subjected to massive German aerial attacks. The duration of repairs in November was halved compared with a month earlier.

The railways during the preparation for the offensive on the right wing sent troops of the 1 shock and 20 armies as part of 75 thousands of people and 300 guns (not counting the rest of the materiel and horses), and on the left wing - troops of the 10 reserve army numbering about 90 thousand people and 200 guns.

According to the headquarters of the Moscow Defense Zone, for the period October-December 1941, the Moscow railway junction transported 1126 echelons, of which 370 echelons with evacuated goods and for operational transportations - 756 echelons.

The headquarters has prepared military reserves of up to 180 thousand people. Moreover, their delivery to Moscow was completely secret: the Germans, 4 of December, were sure that the 200 — 250 of thousands of soldiers confronting them — that was all the Red Army had. The most cautious generals of the Wehrmacht still added 60 — 70 thousands of civilian reserves (militias). Entering into battle the fresh parts of the Red Army was a complete surprise to the Germans. A total of December 5 — 6 of the German army 240 thousand people fought 380 thousands of soldiers of the Red Army. Plus 600 guns and tanks. 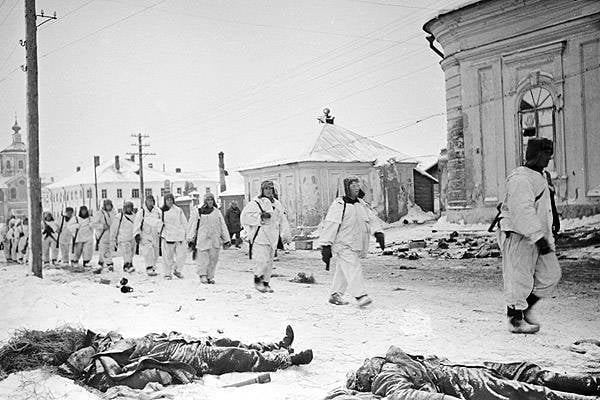 But, as mentioned above, judging by the previous battles in the war, the Germans did not consider this ratio critical. Other factors have also become decisive. For example, for the first time during the Great Patriotic War - full provision of the necessary supplies. This is not only ammunition and shells, but also food, fuel, fodder, medical supplies, the timely removal of the wounded and much more.

But cargo transportation was carried out not only and not so much by rail, as by road transport (already inside the front). In a month and a half, the number of trucks increased by 15 thousand units and reached 71,5 thousand.

It is believed that the Germans destroyed the "General Frost". However, on closer examination, it turns out that frost played into the hands of the Germans, and not at all the Red Army. Until mid-November, German tanks and equipment could only travel along the mudslide along roads. With the onset of cold weather, they were able to conduct an offensive on the frozen ground - through the fields, forest edges. The ice on the small rivers allowed the Germans to force them easily.

Frosts changed the tactics of the German offensive. Whereas previously, tank wedges (a cluster of 30 — 50 and even 80 — 100 machines) delivered the main blow, now the Wehrmacht has arrogantly divided the wedges into small groups of 5 — 10 tanks. These groups of armored vehicles were stretched along the entire front, instead of, as before, assembling tanks into 4 — 5 large formations (advancing, as a rule, along the highway).

Realizing that the attack on Moscow was exhausted, the German generals 3 — December 4 secretly began to issue orders to go on the defensive (secretly, since Hitler categorically insisted only on the offensive). The German military historian Paul Karel in his book “Hitler goes to the East” wrote that if the Wehrmacht had three or four additional days to create defensive lines, the Russians would not have been able to carry out a successful counteroffensive near Moscow. 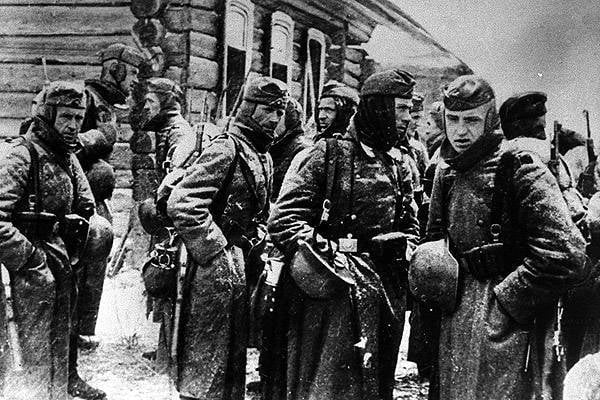 German soldiers near Moscow, December 1941 of the year. Photo: ITAR-TASS

December 4 most of the German troops began to dig trenches and device dugouts, stretching barbed wire, building fortifications. Stalin gave the order to start the December 5 counterattack (in some parts of the front it began on December 6). Perhaps he remembered Lenin's dictum referring to the October Revolution: “Yesterday is early, tomorrow is late.” General Zhukov advised Stalin to launch the December 8 counterattack when reserves were finally formed. Stalin decided to take a chance and start it earlier. And these three days, apparently, played a major role in the battle, not allowing the Germans to prepare defensive lines.

Even among historians, it is still customary to speak ironically about the conviction of the heroes of the Civil War Voroshilov and Budyonny that “it is too early to bury cavalry in this war, it will show itself”. With the counteroffensive near Moscow, the role of cavalry turned out to be very large.

In total, cavalry was 20 — 25% of all Soviet troops near Moscow. Moreover, it was reinforced by heavy machine guns and mortars.

The same Paul Karel wrote about the cavalry of the Red Army:

“The Russians in this wooded area acted bravely, with great skill and cunning. What is not surprising: the units were part of the elite Soviet 20 Cavalry Division - the assault compound of the famous Cossack corps, Major General Dovator. Having made a breakthrough, the Cossack regiments concentrated in various key points, formed into battle groups and began to attack the headquarters and warehouses in the German rear. They blocked the roads, destroyed the lines of communications, blew up the bridges and then attacked the rear support columns, destroying them ruthlessly.

So, on December 13, squadrons of the 22 Cossack Regiment defeated the artillery group of the 78 Infantry Division in 20 kilometers behind the front line. They threatened Lokotne, an important supply base and transportation hub. Other squadrons carried out a roll to the north between the 78 and 87 divisions. As a result, the entire front of the 9 body literally hung in the air. The forward positions of the divisions remained intact, but the lines of communication, the routes of communication with the rear were cut. Ammunition and food stopped flowing. There was nowhere to put a few thousand wounded who had accumulated on the front line. ”

Why did the Red Army counter-attack choke

In the first days of the counteroffensive near Moscow, the Soviet units were on average 6 — 7 km per day (against the Germans 4 — 4,5 km in November). It was a very good pace. However, after 12 — 15 days, the offensive began to run out of steam. And here it became clear once again that winter was not at all a gift for the Red Army. On the contrary, the “General Frost” sided with the Germans.

By 13 — 15 December 1941, the snow depth on different parts of the front reached 60 — 80 cm. Because of this, the cavalry maneuverability, which played one of the main roles in the first two weeks of the counteroffensive (the horse could not walk in high snow), decreased. There were not enough snowplows, and drifts on country roads and even highways affected the supply of supplies and food. The advancing troops again, as in the summer - in the autumn of the 1941, began to experience shell and rifle hunger, a shortage of fuel and food.

The second is the distance of the main warehouses. Now they have defended 100 — 150 km from the army.

Third, the scorched-earth tactics, previously practiced by the Red Army and playing into its hands, now turned against it. The same cavalry entered the liberated villages and did not find forage there. Railway lines, which could be used for supplying supplies, were destroyed. Repair brigades could even recover no more than 7 km of tracks per day, even if they were over-stressed: on the 100 — 150 km, for which the troops had left, they needed two to three weeks.

This time (two or three weeks), while the Red Army was waiting for reserves and restoring supplies, the Germans with might and main used to build deep and engineering-thought-out defense. The stakes also understood that a further counteroffensive in the central sector threatened with the creation of a “boiler”, and she decided to move here in the winter of 1941 — 1942 of the year to a trench war.

The Germans lost thousands of people to 85 during the counteroffensive - a figure inconceivable for them until that time. Moreover, these were the most experienced troops that had passed the 1939-1941 European campaign. Great was the loss and officers. After the winter of 1941 — 1942, the Germans began to gradually shift to accelerated training of officers (this finally happened at the end of 1943), which affected the fighting qualities of the Wehrmacht.

The main result of this battle was a change in the strategy of the German army. After the defeat near Moscow, Hitler, enraged, fired 35 generals and assumed command of the army. The place of experienced generals was taken by the possessed corporal. Began to emerge the outcome of the Second World War.

Ctrl Enter
Noticed oshЫbku Highlight text and press. Ctrl + Enter
We are
Diplomats of the People's Commissariat of Defense: on the eve and during the warGerman submarine during the First World War in detail
36 comments
Information
Dear reader, to leave comments on the publication, you must to register.