A unique private collection of weapons can be destroyed in Yaroslavl 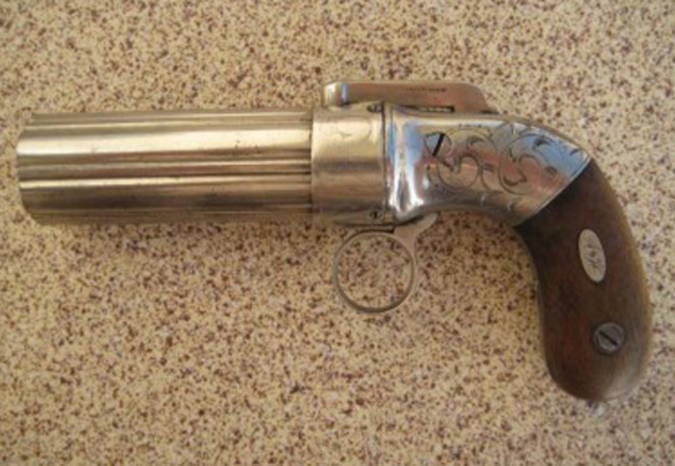 In Yaroslavl collector under the guise of "demilitarization" are trying to select a unique collection weapons.


The Yaroslavl police are continuing to “demilitarize” the population. Recently, another trial ended in the Yaroslavl Regional Court - Yaroslavl businessman Mikhail Balashin unsuccessfully tried to return a unique collection of firearms seized from him by the police.

This история started more than a year ago - when one day from the house of Mikhail Balashin, the police took the 6 vintage revolvers from the 19th century, 5 guns in the 19th - 20th century collectible condition, as well as some spare parts from the old firearms - barrels and bolts, storage which is illegal.

The collection went to the owner as a legacy from his grandfather, who from childhood had taught his grandson to hunt - and his passion for weapons in general. And now, over the course of 27 years, a man collects old weapons - primarily hunting ones, he goes to Germany for international museum exhibitions with his collection every two years.

Although in the collection of Michael, in addition to hunting rifles, such as "Lepage" and "Sauer", there are some very unique samples. These are the Smith and Wesson revolvers No.3 (the so-called “Russian model”) and “Star”.

“I am interested only in ancient weapons of historical and cultural value,” says Mikhail Balashin.

As the collector explained, he did not hide his hobby or his collection; nevertheless, police officers suspecting Balashin of illegal possession of firearms went to him through their own channels:
"I let them voluntarily into the apartment. The police did not have a search warrant, but I was sure that I was doing fine - I don’t have a Kalashnikov machine gun, nor Makarov, nor Stechkin,” collector.

The man is worried that the priceless collection will simply be ruthlessly destroyed and will never come back to his hands. According to him, he repeatedly appealed to the license services of the district and the city, where he was told that there is no mechanism for registering ancient weapons of cultural and historical value.

The fact is that according to the Decree of the Council of Ministers of the USSR No. 646 from 23.07.1975, “On the Establishment of a Unified Procedure for Acquisition, Accounting and Storage of Hunting Rifles,” registration of hunting weapons became mandatory only from 1975 onwards. It was this document that placed control over the acquisition, registration, storage and use of guns on the police.

Before that, they were not subject to registration - perhaps it did not make sense during the hungry post-war time, when almost every second man was a hunter.

According to the law, if the weapon would have been acquired in a hunting shop or from a private person, then it can be registered. But how to register if there are no documents for these items of the XIX century? After all, the previous owner will not find.

Yaroslavl Information Agency "Yarnovosti" turned for comment to Dmitry Gorbachev, a representative of the Yaroslavl Museum Fund, which has an international license from UNESCO, an expert in the field of ancient weapons and metal, who explained that part of the collection really represents historical, cultural and museum value (this is 4 - and 6-barreled revolvers of the Peperbox system and the STARR brand revolver). According to the law, the rules on “Measures to regulate the circulation of civilian and service weapons and ammunition to it in the territory of the Russian Federation” do not apply to these weapons.

The most expensive revolver is “Russian” “Smith and Wesson”, but its value, as well as other items (this is the “Bulldog” revolver, Sauer and Lepage guns) is set by the appropriate expert opinion.

Thus, a legal collision arises: the police seemed to have acted correctly, removing the “dangerous objects” from the collector, i.e. a weapon that can theoretically be used for its intended purpose. True, it is worth making a reservation: it is impossible to find ammunition for some antique guns and revolvers, since their production was discontinued in the nineteenth century. Moreover, as Mikhail Balashin himself explained, 4- and 6-barreled "Peperboxes" and the American-originated "Star" revolver are charged through the barrel, and the cartridges (in any case, in the modern sense of the word) are not provided for them at all. For this reason, the examination of the seized weapons was not carried out in full. In this, too, nonsense - we take away the weapon, but we cannot shoot it, because in Russia there is no such ammunition for a long time. In addition, there is such a term as "metal fatigue." Let's agree that if Balashin or anyone else was going to commit a crime, he would have chosen a much more modern, reliable, simple and cheap to use firearm for this, and would not risk losing his hands and eyes - for example, if he broke the barrel. Nevertheless, the law is the law. You can fire - at least with homemade cartridges - so these are dangerous items. A court was held, according to the results of which Mikhail Balashin received six months of restriction of freedom.

And the collision is as follows: it is not clear what to do now with this unique collection - the law says nothing about it! Considering the museum value of weapons, the collection should definitely be preserved.

According to lawyers, you need an appropriate expert opinion. If the weapon is recognized as a cultural value and is classified as antiquarian, valuable items will be removed from the field of ATC activity, and all others must be registered in the department of licensing and authorization work of the ATC. Otherwise, the weapon will be classified as combat, service or civilian on the basis of the provisions of the Federal Law “On Weapons”.

Dmitry Gorbachev is difficult to assess the value of the collection, as it is necessary to take into account the degree of safety and loss of copies. According to various estimates, it can reach 1,5 – 2 million rubles. Moreover, the expert did not see the items themselves - he had only a description of them. The judge refused to appoint an examination - and now the weapon can in fact be destroyed, since dangerous items are legally subject to disposal.

At the same time, according to the Constitution of the Russian Federation, the state protects the human right to private property.

In court, the collector asked to put the hunting rifles on record - as a hunter, and the "Bulldog" and "Velodog" revolvers (used in the old days by postmen to scare dogs off) - to emasten so that it was impossible to make a shot from them. Nevertheless, he was denied this.

"This is my inheritance, inherited from my father, and to him from my grandfather. I guarantee that all other items were purchased from private individuals and were not stolen from anyone. And they were purchased solely for the collection, and not for committing illegal acts or resale, ”says Mikhail Balashin.“ I don’t understand why the judge doesn’t execute the Federal Law “On Weapons.” I can only explain this by saying that someone liked my collection. I’m sure that if in my presence the weapon is not destroyed , let me even cry, collector I will simply plundered - and after a certain period of years, probably somewhere pop up. "

Ctrl Enter
Noticed oshЫbku Highlight text and press. Ctrl + Enter
We are
Results of anti-terrorist work on Dagestan in April 2014Photo from Syria by Mikhail Leontiev
49 comments
Information
Dear reader, to leave comments on the publication, you must to register.