December 13 2013
292
Vilnius is avenged! The European Union may be partially satisfied for Vilnius European shame: Euromaidan shook Ukraine to the ground. But Euro-revolution nevertheless did not pass to the end. Still, this is a remake, the second edition of the orange creation of Professor Gene Sharp in Kiev, and the effect of novelty has been lost. Euromaidan is still a farce, история repeated in the form of a farce, in comparison with the orange Maidan, he became stupid, and the power grew wiser. 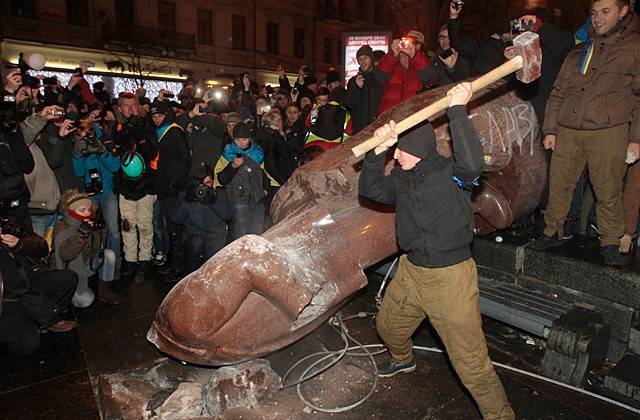 Orange Maidan had the sense not to touch the monument to Lenin, Euromaidan dumped him and outraged the defeated stone body. Klitschko said that this is no vandalism, but a way out, so to speak, of revolutionary enthusiasm. He does not understand that “Lenin” will avenge them: revolutionaries should not desecrate other revolutionary symbols.

In general, Klitschko and the company were lucky only once. The first provocation, the “hook” of Professor Gene Sharp, was not successful, and even then not completely: there were no casualties during the “overclocking of Euromaidan”! They are trying, of course, to inflate what is, but there is too little material to slap “the criminal regime case” out of it.

The second step of the revolution was not completely successful - they only captured the square, several streets and buildings, but the whole city would have to! At the third Sharpovsky step, the Euro-revolution stalled - it could not bring the sacred sacrifice. There were attempts, but the “klyaty regime” rested, and he was lucky again. This led to the loss of an important pace, the Euro-revolution has lost its development, and it must certainly go, in theory, incrementally!

There is a lot more luck on the side of power. Home luck - you can avoid the victims. It is almost a miracle, with such a sweep of the elements of the masses. Lucky with the Berkut, he will go down in history with his endurance. Lucky for the stupidity of the revolutionary "troika of leaders", in general, God is on her side.

Another important circumstance - the European emissaries did not succeed, by and large, in splitting the presidential power; several defectors did not count. On the contrary, the ranks of the revolutionaries broke up: streams of information flowed out of their headquarters, which, probably, had already played their part.

Many analysts say that Euromaidan splits the country. Yes, it splits, it is almost an obvious fact, and on Euro-Ukrainians and Russian-Ukrainians. A simple conclusion follows from this - in order to preserve the unity of Ukraine, the authorities must suppress Euromaidan politically. And who in focus does not see this obvious fact? Look how interesting it is: the European Union and the United States do not see this, and they in every way inflate Euromaidan, hiding behind the humane demands of “not offending” provocateurs and other revolutionaries.

The political and ideological sponsors of Euromaidan in fact seek to split Ukraine. What for? In order to blow up the country, it should be precisely split, a split is a kind of political dynamite. That is how they blew up Yugoslavia, splitting it into many parts. The ancients said: look who speaks most about the world - he is preparing for war.

But why does the West go in Ukraine to the “Yugoslav scenario”? Its main goal is to force President Yanukovych to sign the Agreement on Euro-Association in its original form - the Euromaidan-European Union has not reached. Obviously, in a demeaning form for Ukraine, this Agreement will not be signed any more, and in another form it will not be necessary for the European Union. He has no money for it.

New negotiations on amending the Agreement seem doomed to failure. Moreover, there is no time for them: in March, the European Union has elections, so its current leadership is all “lame ducks”: in the spring the situation in Europe will change a lot, new faces will come to politics.

However, a failed revolution is a coup. Such a turn of affairs gives Yanukovych good opportunities for a political counteroffensive. Will he use them? We'll see ... If he shows will, he will be able to suppress Euro-revolution in this round.

Ctrl Enter
Noticed oshЫbku Highlight text and press. Ctrl + Enter
We are
Ex-boxer V. Klitschko throws out "white towel"Results of the week. “A smart face is not a sign of the mind”
292 comments
Information
Dear reader, to leave comments on the publication, you must to register.