December 12 2013
9
Widely known is the experience with a coil of thread, which, if pulled over the free end of a thread, starts moving and, contrary to obvious assumptions, “runs away” into the distance. It was this simple effect that pushed a young Australian engineer, Louis Brennan, to the idea of ​​creating a new weapons. A simple but interesting mechanical effect became the basis for creating the world's first guided weapon system for fleet - torpedoes of the L. Brennan system.

Before starting the development of a promising torpedo, L. Brennan conducted an analysis of the possibilities and tried to establish in what type of technology a known “coil effect” could be applied. Unwinding the thread or cable allowed you to move an object only in one direction, without the possibility of return. Thus, a similar original drive could only be used in weapons like a torpedo. Due to the lack of other ways to implement the idea, Brennan began work on a project for weapons for the fleet.

The first calculations and drawings were made in 1874 year. William Charles Carnot, a professor at the University of Melbourne, helped Brennan to work on the project. Remarkable is the fact that U.Ch. Carnot became the first professor in stories this university. For several years, Brennan and Carnot studied the physical and mechanical features of the interaction between the filament and the coil. Using the results of research, they created several draft designs of a torpedo. For four years, the engineer and the scientist have worked out a number of design options and tested several prototypes. For example, a variant of a torpedo with one propeller was tested. Despite the simplicity of the design, single-rotor unit had insufficient travel stability and low speed.

In 1878, Brennan and Carnot built a full-size prototype of a promising torpedo equipped with an original drive and two propellers. The operating model of the torpedo allowed to check the correctness of the applied technical solutions and determine the further course of the project development. An experienced torpedo with a length of about 4,6 meters had a “spindle shaped hull” traditional for torpedoes of that time, stabilizers and two coaxial propellers in the tail section.

Unlike other self-propelled mines, Brennan's torpedo did not have its own power plant, allowed to simplify its design and reduce the cost of production. To provide a torpedo with energy should have been a steam engine, which was proposed to be installed on the shore or on a carrier ship. The steam energy was supposed to set in motion the drums of the two winches on which the cable or wire was wound. In the middle part of the torpedo there were two coils with a cable or wire attached to the winch wound on them. The coils were connected to the propeller shafts. Thus, the steam-driven winch had to choose a cable and thereby rotate the coils that transmit torque to the propellers.

Tests of the first full-size prototype torpedoes were held at the docks of Williamstown. The original drive, which used thin wire, showed its positive aspects, although it was not without flaws. However, the main result of the test was not the confirmation of characteristics or the identification of deficiencies, but the idea of ​​a turning mechanism. L. Brennan during the tests proposed to equip the torpedo with an original mechanism that tracks the speed of rotation of the coils. If one of them rotated faster than the other, the special mechanism had to deflect the steering wheel. Due to this, it was possible to change the direction of movement of the torpedo, increasing the speed of rotation of one of the winches.

Even before the start of fine-tuning the mechanism of rotation of the project torpedo Brennan caught the attention of British naval commanders. The existing prototype was demonstrated to representatives of the Admiralty of Great Britain, who were interested in the project and recognized it as promising. After that, the team of Louis Brennan received a grant to continue the work, followed by the construction of a combat-ready product. The date of construction of the new prototype determined the spring of the next, 1879 year.

In March, the 1879 in Melbourne passed the tests of a new prototype. From the first prototype, it was distinguished by the presence of a turning mechanism, a modified body and drive, as well as a place to install a warhead. In the same year, Brennan and his colleague John Ridley Temperley founded the Brennan Torpedo Company (the Brennan Torpedo Company). In the future, all the work on the project was carried out not by a group of like-minded engineers, but a commercial organization with its own design bureau and production.

In 1880, the backbone of the Brennan Torpedo Company went to the UK, where it was supposed to complete the development of a promising torpedo for the empire's navy. However, by this time the enthusiasm of the admirals had decreased. The Admiralty once again analyzed the proposed project and found it unsuitable for practical operation. The reason for the claims was the original wire drive: the commanders felt that installing a separate steam engine with winches on the ship and controlling the torpedo with the help of two wires would complicate the operation of the new ammunition too much. 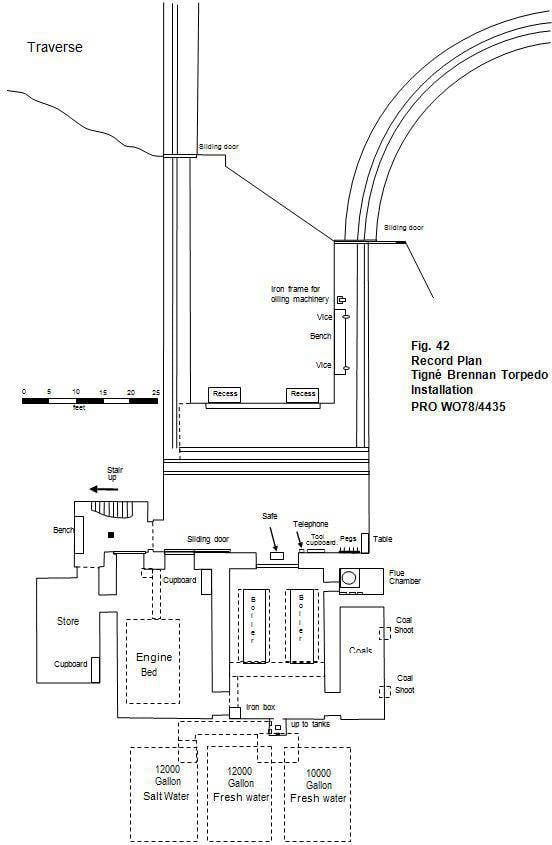 Brennan's torpedoes deployed as a cover for harbor entrances and strategic ports.

Failure of the naval forces could put a cross on the project. Fortunately for the project and the employees of Torpedo Company, the Royal Engineering Corps became interested in the new guided weapon. At that time, this organization was engaged in the coastal defense of the country. In the 1881 year, after additional tests, a special Corps commission recommended completing the project and adopting a new torpedo. Now the torpedo design Brennan proposed to protect the ports and harbors.

About two years after that, a new contract for design work followed. By this time, the Royal Engineering Corps and the Brennan Torpedo Company had built a test facility at Fort Garrison Point. Prior to 1885, the Corps and Brennan Company conducted a large number of torpedo test launches with an attack of training targets. Finally, in 1886, a document was issued, according to which Brennan's torpedo was put into service. Soon a contract was signed for the supply of torpedoes and shore aggregates of the torpedo complex. The total contract value was huge for that time 100 thousand pounds sterling.

In its final form, Brennan's torpedo was slightly different from the prototypes used in the tests. The spindle-shaped case with a length of 4,6 meter with the purpose of stabilization had a section close to elliptical. Stabilizers of various sizes and shapes were installed on the nose and tail parts of the hull. An 200-lb (91 kg) warhead with a contact fuse was placed in the nose of the hull. The middle and tail part of the body was given under the drive. In the middle there were two coils with wire, in the tail one there was a propeller shaft and a steering machine. In addition, the adopted torpedo received an automatic system that kept it at a depth of 12 feet (3,7 meters). 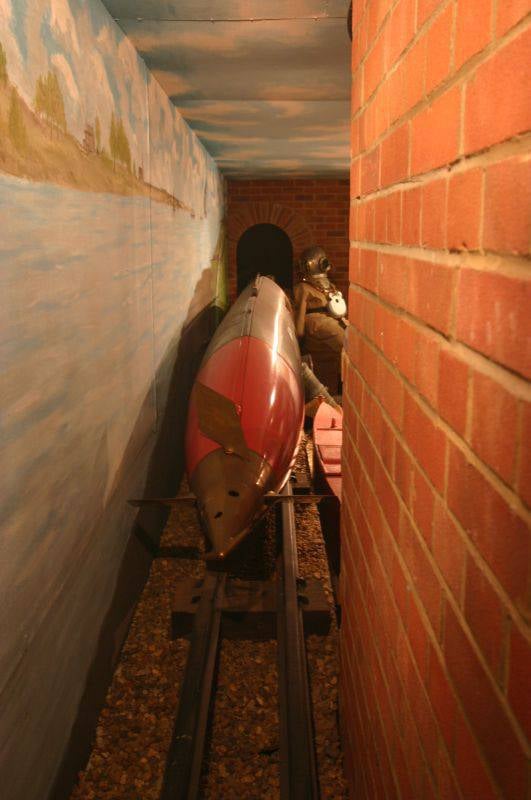 Initially, on the torpedo coils was placed on 1800 meters of metal wire with a thickness of 1 mm. A torpedo with such a wire could accelerate to 20 nodes. A further increase in speed was limited by the strength of the wire. During one of the upgrades, Brennan's torpedo received a stronger wire with a diameter of 1,8 mm. Due to this, the torpedo speed has grown to 27 nodes. With such a speed, a torpedo could go 1800 meters in about two minutes.

The ground part of the torpedo complex consisted of a launcher with a steam engine and a hoisting tower. The first part consisted of the actual steam engine, winches with a control system and rails along which the torpedo was lowered into the water. The workplace of the operator of the complex was located at the top of the telescopic mast with a height of 12 meters. In a small cabin installed binoculars on the frame, with which the operator had to monitor the torpedo and the target, as well as an electric control panel. With the help of several buttons and switches, the operator could launch a torpedo and control it. For ease of targeting, a mast with a flag mounted above the surface of the water was mounted on the upper side of the torpedo.

The plans of the Royal Engineering Complex included the construction of 15 torpedo stations at several important ports. However, the complexity of the construction of the ground part did not allow to realize these plans. It was built only eight stations in the ports of Britain and the colonies. In the future it was supposed to continue the construction of stations. With a maximum range of 1800 meters, the torpedoes of the new design reliably protected the port from enemy ships trying to break through. It was assumed that the torpedoes should complement the coastal artillery, aiming to hit ships.

In 1905, shortly after the start of the Russo-Japanese War, it became clear that the development of warships led to a change in the doctrine of war at sea. After analyzing the course of the overseas conflict, the British admirals have developed new requirements for modern and prospective torpedoes. The guided munition of the L. Brennan system no longer matched them. In 1906, almost all torpedo stations built by that time were removed from combat duty, and then dismantled. A number of torpedoes and their layouts have been preserved in the museums of Great Britain and its former colonies.

Ctrl Enter
Noticed oshЫbku Highlight text and press. Ctrl + Enter
We are
Jet torpedo RAT-52Torpedo 53-39 and its modifications
9 comments
Information
Dear reader, to leave comments on the publication, you must to register.