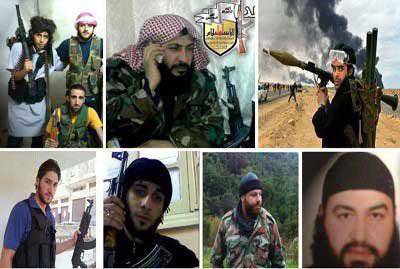 In the various provinces of Syria, the attacks carried out by the so-called "opposition" against civilians continue.


In the center of Damascus there is a very lively area - Salkhiya. There are many small shops and cafes, it is one of the favorite places for walking. But the December 9 day turned out to be unlucky for those who were in the area at the time of the next terrorist crime.

A mortar shell, exploded in a crowded place, led to the injury of dozens of people. Two of them - a man and a woman - subsequently died in the hospital. A few more citizens are in critical condition. Huge material damage to shops and cars.
In the city of Homs, militants shelled a Christian church in the Al-Mahatta district. Four citizens were injured. Two more shells fell on the street Al-Brazil and the quarter Al-Dablyan. Fortunately, there were no casualties, but great damage was caused to the apartments of citizens.

The terrorists laid an explosive device on a road in the province of Hama, between the villages of Al-Khmeri and Khirbet-Aref. When it worked, three people died, there are also victims.

In the meantime, the SAR MFA sent an official letter to the UN Secretary General and to the UN Security Council regarding the intervention of the Saudi Arabian regime in Syrian internal affairs. According to the document, the Saudi authorities not only arm and finance terrorists, but also recruit extremists into their ranks. In addition, the criminals who are in prisons in Saudi Arabia are released with the condition that they go to Syria to join the gangs.

The Foreign Ministry noted that the CA regime, taking advantage of the fact that the main Muslim shrines are located in the country, distort Islam and spread extremist ideas, calling for the so-called “jihad” against Syria. In the ranks of the two main terrorist organizations - “Dzhebhat An-Nusra” and “Islamic State Iraq and the Levant”, thousands of Saudi Arab fighters are engaged in criminal activities. The Syrian army, according to the message, had to eliminate more than 300 Saudi terrorists.

ATS MFA said that Saudi Arabia, while supporting the terrorists, is responsible for their crimes. Recalling that the CA’s foreign minister openly speaks about arming Syrian militants, Syria stresses that in this regard the UN Security Council should take measures to curb such activities, since it contradicts the UN Security Council resolution 1373 of 2001 of the year, which requires to give up support persons involved in terrorist activities.

And, as if in confirmation of the statement of the Foreign Ministry, there were reports in the Arab press that Saudi Arabia was paying for the treatment in Israel of the Syrian "opposition" militants. In particular, in the Israeli city of Elat, Netanyahu met with the head of the Saudi special services Bandar Ben Sultan. The Israeli Prime Minister was offered huge sums of money for the treatment of the gangsters who infiltrate into Israel from Syria through the occupied Golan. They also discussed actions to disrupt the upcoming Geneva-2 conference.

Now it became clear the benefits of Israel to treat Syrian militants. But the official policy of this territorial entity proclaimed non-interference in the Syrian crisis.

A sensational revelation was made on the pages of the London Review of Books by the famous American journalist, Pulitzer Prize winner Seymour Hersh. It is worth recalling that several decades ago, this man told the public about the mass slaughter committed by the Americans in the Vietnamese village of Songmi. He was the first to raise the issue of torture and torment applied by the American occupiers to the prisoners of the Iraqi prison Abu Ghraib.

Now the journalist said that the American administration was well aware of the capabilities of the Syrian terrorists to produce sarin. But Obama and his staff specifically silenced this fact to accuse the Syrian army of its use of 21 August 2013 in the East Guta area near Damascus and to base on these accusations an attempted force intervention. That is - simply military intervention based on lies.

Earlier, Hersh had tried to publish this material in The New Yorker and The Washington Post, but the American “democracy” was afraid to print it.
According to the journalist, a few months before the 21 incident of August, a report “Top Secret” appeared in the US special services, stating that sarin production technologies were at the disposal of Dzhebhat An-Nusra. However, it was worth the incident with the use of chemical weapons, as Obama without any particular reasoning accused the Syrian authorities in it, noting the version that the “opposition” militants had used it. Hersh drew a parallel with how the US authorities attacked Iraq, saying that Saddam Hussein allegedly had chemical weapons.
The journalist pointed out that while official Damascus transfers its chemical weapons to the control of the OPCW inspectors for subsequent destruction, the militants do not get rid of their chemical weapons. As a result, they may become the only party that possesses such weaponsand this is a great danger.

As long as Saudi Arabia, under the auspices of the United States, gives the bandits weapons and money, Russia is helping the people of Syria. Two more airliners with humanitarian aid on board arrived at the airport in Lattakia.

Ctrl Enter
Noticed oshЫbku Highlight text and press. Ctrl + Enter
We are
In Donetsk, laid the Alley of national unityThe attacks continue to claim the lives of the Syrians, and the Belt of the Virgin Mary returned to Homs
29 comments
Information
Dear reader, to leave comments on the publication, you must to register.