The Ministry of Defense summed up the year: what depresses, what inspires? 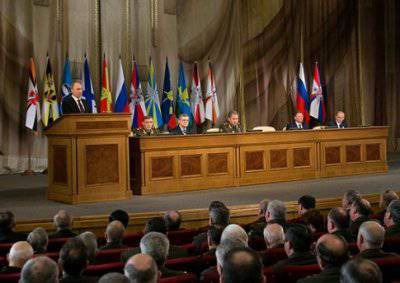 The week at the Academy of the General Staff held a final meeting of the board of the Ministry of Defense in the outgoing 2013 year. The final meeting is usually more like a formal event, but in this case there was something to discuss at the board, and what specific results of the “defense” year to bring. It is noteworthy that in the course of this meeting even the figures that were initially given the status of secret information were discussed - data not intended for public discussion (especially in front of the television cameras).


This time the speech of the Supreme Commander was thorough enough. If in previous years the emphasis was on a phrase like “reform is underway”, “we hope”, the situation should change for the better in the near future, now the specifics in Vladimir Putin’s speech were, let's say, several orders of magnitude more. At the same time, the specifics extended far not only to the glorification of the achievements of the authorities when reforming the military system and improving the level and quality of defense capability, but also to what could be called systemic errors and shortcomings.

In particular, Vladimir Putin declared the deplorable state of military equipment samples, which are sometimes used in military units for a third of a century or more. If we consider only such a segment of the country's defense as an air force, then around 35% of the total, let's say, the park is in a state of disrepair or “semi-defective”. That is, in fact, every third unit of combat and service equipment either needs high-quality and costly repairs, or should be completely utilized, of course, with replacement by new samples.

Another sad moment can be considered the fact that with the longest border in the world, our country is not able to fully and effectively protect all parts of this border without exception. The main reasons are a serious shortage of technical means (these are border monitoring tools (tracking), and special vehicles, and perhaps the main thing is an acute shortage of professional staff), often showing a lack of quality interaction between the Ministry of Defense and the relevant FSB directorates.

The problem of the lack of the necessary number of professionally trained military extends far beyond the need to ensure the security of the Russian borders. “Contract” gaps (that is, the lack of a sufficient number of military personnel serving under the contract) manifest themselves in all types and types of troops. Although advances in this direction are available. And they were mentioned at a meeting of the Defense Ministry board. Information on contract recruitment in the army was announced, and, according to this information, the recruitment plan for 2013 was even exceeded (by 20%). If you believe the published data, then today in the Russian Armed Forces 220 thousands of contract servicemen in the positions of soldiers and sergeants. Recall that in the final version, this number should reach a value of about 475 thousand people by 2020 year.

As positive developments in the Russian army were noted and multiple exercises that have passed in the 2013 year. The scale of some of them was more than impressive. For example, it is worth noting the exercises held in the BBO (Eastern Military District). A total of 160 thousands of military personnel, 13 thousands of ground combat vehicles, 70 naval military vessels, 130 military aircraft and helicopters took part in these maneuvers.

The exercises of the Strategic Nuclear Forces were also noted at an impressive scale. In their course, an automated communication system was tested, working out solutions to problems related to the interaction of various segments of the nuclear deterrence system. Missile launches (including missiles launched from underwater position) that hit targets at special ranges, sorties aviation, checking the coordination of the implementation of tasks by individual units.

During the exercises, the Russian army initially initially vigorously discussed the term “sudden check” and everything that could be connected with true suddenness, but after conducting a number of such checks, it became clear that this was not a momentary whim, but a system that should really work. The inspections themselves revealed multiple problems: from unintelligible communication between individual units to the inability to establish clear joint actions to achieve the goals set. However, with each new test, the situation was somewhat straightened, with errors clearly not neglected, which is encouraging.

The Ministry of Defense notes the importance of international maneuvers held in 2013.

In the second decade of May, joint anti-terrorism exercises "Pomor" were conducted with the participation of warships of Russia and Norway.

Already in June, the next Norwegian-Russian exercises Barents-2013 took place. The purpose of the exercises: working out the interaction of Russian and Norwegian soldiers and rescuers in the search and rescue of sailors in distress in the northern latitudes.

"Peace mission 2013" - Russian-Chinese doctrine, held in the summer of this year in the Chelyabinsk region. The total number of military personnel involved is about 1400 people.

The end of August 2013 - tripartite teachings of Russia, the United States and Canada "Watchful Eagle". The exercises involved military aircraft and air defense systems. Petropavlovsk-Kamchatsky was selected as the Russian maneuver control center. The purpose of the exercise: the detection and interception of aircraft conditionally captured by terrorists, with the transfer of escort in the air.

September 2013 of the Year - "Combat Commonwealth 2013". This is a test of the combat readiness of the air defense systems of the countries of the Commonwealth of Independent States. In addition to Russia, military personnel from Belarus, Kazakhstan, Tajikistan and Kyrgyzstan participated in the exercises.

The strategic exercise “West 2013”, which made a lot of noise in a number of Western countries, was attended by military units of Russia and Belarus.

The October teachings "The indestructible brotherhood of 2013" took place at the Chebarkul training ground (Chelyabinsk region). The CSTO formations took part in the exercises. The total number of troops - 2,5 thousands of people. More 500 units of military equipment.

Of course, all Russian-Norwegian or Russian-Canadian teachings are important, but for Russia today is more a tribute to international fashion or even such performances with scenarios about “international friendship and cooperation.” Well, the performances are also needed, without them nowhere. But much more important are the internal exercises with the rise of the alarm, the need to leave (fly) hundreds or even thousands of kilometers. Such maneuvers make it possible to monitor the status of both individual units and entire segments of the Armed Forces, on the basis of which relevant conclusions can be drawn. Here you need to pay special attention to foreign reaction. When large-scale checks of the combat readiness of the Russian troops had just begun, a loud, sorry, yelping in the style of “Guard! Russian bear wakes up! ". During the year, thanks to the frequency and intensity of military checks in Russia, western yelp was replaced by scratching the “democratic” nape, saying that if Russian Bear is really waking up. Immediately need to do something! ..

Apparently, they did not have time to orient themselves quickly - as a result of the adoption of the Russian initiative on Syria. Here, by the way, Russian warships in the Mediterranean Sea and rumors about deliveries to Damascus C-300 obviously played a significant role. The information component of the modernization of the Russian army is not the last thing ...

If we go back to the closed numbers mentioned at the beginning of the material, which we decided to share, we are talking about the percentage of modern equipment in the troops, and plans to recruit cadets to military universities, as well as the number of officers that are required for the army today. So, the actual numbers: the Ministry of Defense states that before 2020, the need for officers will be about 280 thousand people. The annual graduation in military schools will be about 20 thousands of young professionals per year. The percentage of new equipment was voiced by the following: in the Air Force - 42%, Navy - 52%, SNF - 45%. The minimum is in the Ground Forces (21%). Maximum - at CTP (62%). Some figures, frankly, are shocking, but I want to believe that the work is being done in the right direction, and therefore the situation will change for the better.

It is important to note that, despite the presence of numerous problems in the army, these problems are voiced, and the Ministry of Defense is trying to find ways to solve them. As they say, it is gratifying that from a discussion of how much the main military department was stolen from the treasury, in just a year or two, we were able to move on to an objective discussion of the real needs of the Ministry of Defense, the course of modernizing the army and fleet, methods of this modernization. Of course, the question “how much was stolen and who will answer for it” did not stop us worrying, but now there is reason to discuss more positive things ...

This suggests a fairly large public openness of the defense department, which in itself is a significant precedent. It's hard to ignore. And openness at the stage of substantial renewal of the army is one of the important points of transparency of the entire reform. Of course, you need to do much more than what has been done at the moment, but the main thing here is not to lose pace and not to slip into new reflections: can the army financing be somewhat cuts or transferred to the future in order to save money in the budget? .. It’s much better to save others in ways. You can not only save, but even acquire: as an option, the confiscation of the property of those who, on army reform, managed to perfectly modernize their family housing stock and fleet ...

Ctrl Enter
Noticed oshЫbku Highlight text and press. Ctrl + Enter
We are
Results of the week. "Who you are lucky, in fact, and will carry a cock, and such a bird as you, I, too, will rush!"Results of the week. "Well, do not change me because of every idiot!"
52 comments
Information
Dear reader, to leave comments on the publication, you must to register.