White Death from the Pamirs 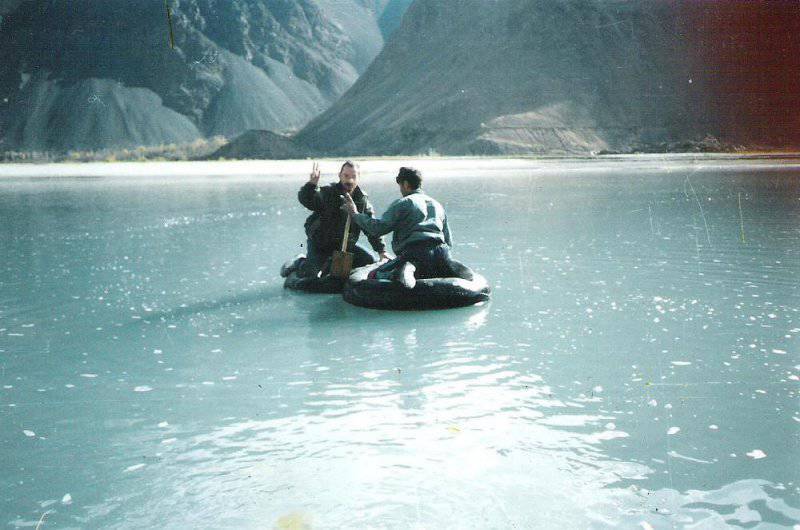 In the Pamirs - the next armed clashes because of the control over drug trafficking. Dushanbe refuses to return Russian border guards to Tajikistan, and, consequently, the flow of deadly potion to Russia does not decrease.


The prosecutor's office of the Gorno-Badakhshan Autonomous Region of Tajikistan (in the vernacular of GBAO known as the Pamirs) opened a criminal case on the fact of riots, resistance to the authorities and the seizure of weaponsoccurred in Khorog at the end of November. As a result of an armed incident that occurred between a group of young people and security forces, six law enforcement officers of the country were injured, two vehicles belonging to the GKNB and the Interior Ministry were burned down.

The incident was caused by the arrest of Sherik Abdulamidov, an employee of the Tajik Drug Control Agency (DCA), whom the security services accuse of stealing and illegal possession of weapons, organizing mass riots, and violence against a government official.

The current incident is just one of many armed clashes in the Pamirs, and almost all of them are related to drug smuggling from neighboring Afghanistan.

Recall that in the summer of 2012 in the Pamirs there was a real war between government forces and Pamir militants. According to official figures, 12 soldiers were killed during the fighting, and about 20 were injured. Losses from the militants - 30 people, 40 detained. However, according to journalists and human rights activists of the victims, there were significantly more — more than a hundred dead among the military and as many among civilians.

The special operation in the Tajik Pamirs began after government forces tried to detain the suspects in the murder of General Abdullo Nazarov, the head of the regional department of the State Committee for National Security (GKNB). According to the official version, Nazarov was killed at the entrance to the city of Khorog - the administrative center of GBAO - after a quarrel with Lieutenant Colonel of border troops, a native of Khorog Tolib Ayembekov.

Tolib Ayembekov was considered one of the four informal leaders of the Pamir who specialized in drug smuggling. He was the brother of the famous Abdumalon Ayembekov (better known as Lesha Hunchback), the main field commander and drug lord of the Pamirs, who was killed in 1994 year.

The correspondent of Rosbalt met with Lesha Hunchback in 1993: Abdumalon’s height was no more than 160, and a huge hump stood on his back. Outwardly, this man looked like a heavy handicapped person, and it was hard to believe that the Pamirian militants obey him without question. Ayembekov did not deny that he was engaged in drug smuggling, but he considered it his main task not to allow government forces or opposition fighters to enter the Pamirs.

“We don’t have industry, and winter lasts for half a year, and we cannot, like residents of other regions of Tajikistan, grow fruit. Drug smuggling is the only way for us to survive,” the famous mafia assured me.

In the arguments of Lesha Gorbaty there is at least a grain of truth. The poppy-growing Afghan peasants also reasoned, and NATO forces rarely destroy their plantations.

After the withdrawal of Russian border troops from Tajikistan, the Pamir border section became almost transparent. This region is especially convenient for smugglers. The Tajik and Afghan Badakhshan is divided by the narrow and shallow Pyanj River here, which can even be waded in the eastern Pamirs. In the western Pamirs, smugglers use an ordinary car camera as a means of transportation, to which the bottom is sewn, and wooden shovels are used as oars.

The ongoing armed clashes in the Pamirs show that the problem of drug smuggling is still relevant here. At the same time, one should not indulge in the illusions that the struggle is between smugglers and security officials - most experts assess these clashes as a struggle between competing interest groups in the same business.

The problem of drug smuggling from Afghanistan to the Pamirs cannot but worry Moscow, since then the lion's share of this deadly potion is shipped to Russia.

In this situation, it would be logical to agree with Dushanbe on the return of Russian border guards to the Tajik-Afghan border. To intercept them on the huge (more than 7 thousand km.) And poorly guarded Russian-Kazakhstan border is much more difficult than in Tajikistan. According to the head of the Federal Drug Control Service, Viktor Ivanov, about 100 thousand people die from drug use every year in Russia. And, first of all, people die in active and working age.

In this situation, it has long been expected that Moscow and Dushanbe will accept an agreement on the return of Russian border guards to Tajikistan. Many analysts predicted that this would be done at the September summit of the CSTO in Sochi, but, alas, these predictions did not come true. In part, why this agreement was never accepted is clarified by today's interview with Russian Ambassador to Tajikistan Igor Lyakin-Frolov to Kommersant. As a high-ranking Russian diplomat said: "Our Tajik partners say that they could, with the material and technical support of both Russia and the CSTO countries, provide reliable border security. The question of how to return Russian border guards to the Tajik-Afghan border is not our put. "

It causes strong doubts that the material and technical support of the CSTO countries will fundamentally protect the Tajik border from a deadly potion from Tajikistan.

"The main threat on the Tajik-Afghan border in the zero years today is not a threat to break through gangs, but drug trafficking. Meanwhile, for some it is a threat, and for others it is a magical source of enrichment. A source used not only by criminal groups of smugglers, but and those who are invested with power in Tajikistan, including representatives of law enforcement agencies. A stream of opiates from Afghanistan could not reach Russia without the participation of representatives of power structures of transit countries in this traffic, that is, including Tajikistan on "," Azhdar Kurtov, editor-in-chief of the magazine Russian Problems of National Strategy, told Rosbalt.

According to the expert, the authenticity of this version is evidenced by the fact that there is a strange coincidence: the release and compulsory distribution among the population of Tajikistan of shares for the construction of the Rogun hydropower station coincides with a fall in the figures for the detention of drug dealers in the country. “It is not difficult to assume that the Dushanbe authorities simply took the position:“ You give money to Rogun, and we turn a blind eye to how you earn them, ”said Azhdar Kurtov.

The fact that an employee of the Tajik Drug Control Agency was implicated in the last incident also testifies to the version of Kurtov. Therefore, it is hardly necessary to hope that the flow of the deadly potion to Russia will decrease.

Ctrl Enter
Noticed oshЫbku Highlight text and press. Ctrl + Enter
We are
Tajikistan in the shadow of ChinaUSA and Eurasia
35 comments
Information
Dear reader, to leave comments on the publication, you must to register.