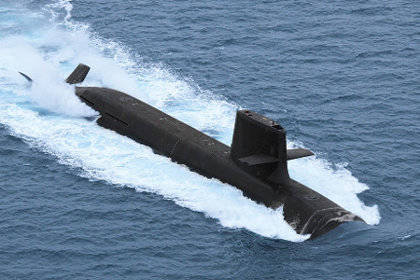 The Australian Ministry of Defense plans to conclude an agreement with Japan on access to some submarine propulsion system technologies. About this, as reported by Jane's, said Australian Defense Minister David Johnston. We are talking about cooperation in the field of transmission development on the basis of a similar element of the Soryu-type submarines, which are in service with the Japanese Self-Defense Forces.


According to Johnston, negotiations are already underway with the Japanese side. The Australian military plans to get some of the transmission technology, which is already in mass production and is not a state secret. At the same time, the Australian minister noted that there is no talk about the disclosure of advanced technologies. Australia is particularly interested in the technical possibility of creating a transmission for submarines of large displacement.

The submersible displacement of the “Soryu” type ships is 4,2 thousand tons with a length of 84 and a width of 9,1 meter. These ships are equipped with Kawasaki 12V 25 / 25 SB diesel-electric power units and Kawasaki Kockums V4-275R Stirling engines of a joint Swedish-Japanese development. "Litter" can reach speeds up to 20 nodes, and their range is 6,1 thousands of miles. Submarines are built at the enterprises of Kawasaki Heavy Industries and Mitsubishi Heavy Industries.

In September 2012, Australia and Japan signed an agreement to deepen scientific and technical cooperation in the field of defense. According to Jane's, if Australia gets access to the power plants of Soryu-type submarines, this will happen thanks to last year’s agreement. All the technologies obtained will be used in the framework of the SEA 1000 project to create new submarines, which will have to replace outdated Collins-type submarines.

It is expected that the construction of new submarines on the project SEA 1000 is scheduled to begin in 2017. Adoption of the first ship is scheduled for 2025 year. In total, the Australian Navy should receive 12 new submarines. Currently, Australia is trying to determine the best implementation option for the SEA 1000 project. Among the opportunities considered are: designing a submarine from scratch and developing a ship based on already existing projects.

Ctrl Enter
Noticed oshЫbku Highlight text and press. Ctrl + Enter
We are
The main directions of development of the sea self-defense forces of JapanModern technology to ensure the safety of advanced bases
16 comments
Information
Dear reader, to leave comments on the publication, you must to register.