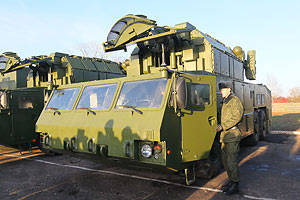 The third battery of the Tor-М2 anti-aircraft missile system (ZRK) arrived from Russia in the Air Force and Air Defense Forces of the Armed Forces of Belarus.


This was announced today to journalists by the Commander of the Air Force and the Air Defense Forces of the Armed Forces of Belarus, Major General Oleg Dvigalev.

“The battery arrived in Belarus, currently it is in Minsk,” he said, noting that after all the necessary procedures had been completed, the unit would be relocated to Baranavichy. According to Oleg Dvigalev, after the arrival of the third Tor-M2 battery in Belarus, a full-fledged division will be formed, based on completely new models of military equipment.

Ctrl Enter
Noticed oshЫbku Highlight text and press. Ctrl + Enter
We are
This year the second battery of the Tor-М2 air defense system will be delivered to the Belarusian army.ZRK C-200 rust in the woods near Moscow
41 comment
Information
Dear reader, to leave comments on the publication, you must to register.