December 16 2013
12
The multipurpose heavy helicopter Mi-10K is a specialized crane helicopter. The Mi-10K helicopter can carry bulky cargo not only inside the fuselage, but also on the external sling. The helicopter crane is mounted a conventional cable external suspension assembly, which is designed for 8000 kg cargo. The helicopter is widely used when installing poles of power lines, filtration equipment at chemical plants, when installing radio relay towers and other construction and installation works. 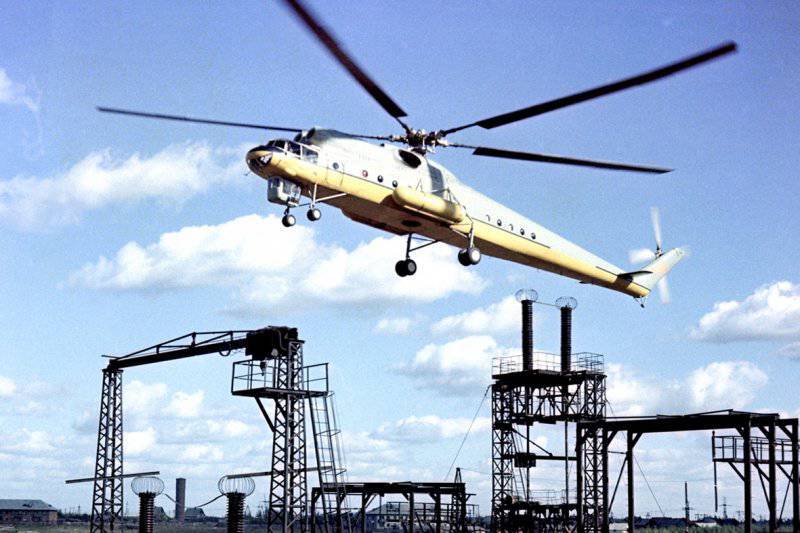 Helicopters Mi-10 cranes found limited use not only in the armed forces, but also in the national economy. The versatility of the application was limited by the need to equip the cargo with counter units for hydraulic lifts. The gain from the lightweight weight of the chassis of the fuselage was negated by the length of the chassis. Anticipating these problems, the Mil Design Bureau in the 1964 year began the development of a "short-legged" modification of this helicopter. The lead designer was appointed A.A. Kh. Modification of the Mi-10K was developed specifically for construction and installation works.

Single-rotor helicopter with Mi-6 scheme: steering screw, two GTE and four-chassis. The design of the fuselage and chassis are somewhat different from its predecessor. The semi-monocoque fuselage has a two-seat cockpit in front, with an improved downward view. The bearing screw is like a Mi-6 helicopter. Structural tilt forward is reduced to 0 ° 45 '. Also the steering screw was no different. The transmission system and powerplant are the same as those of the predecessor, fuel is contained in 2 fuel tanks (total capacity 9000 liters) in front of the main landing gear on the sides of the fuselage.

Designers abandoned hydraulic grippers and external platform. Thus, the chassis height was reduced, which reduced weight and drag. Instead of cameras for control when loading and unloading, which did not justify themselves, the Mi-10K was equipped with a suspended cabin with a third set of control levers and all-round visibility. The gondola was located under the nose of the fuselage. When carrying out loading and unloading and installation work, one of the pilots goes into a suspended cabin. Sitting down facing the cargo, he was able to observe the cargo and at the same time control the helicopter. "Savings" on the racks made it possible to increase the mass of cargo transported on the external sling up to 11 tons. The bottom post provided high accuracy of assembly operations. In the 1975, all the Mi-10s were equipped with an external vibration damping and vibration system.

On the Mi-10K, the autopilot was installed, which had channels of direction, pitch, roll and height, as well as a rotor stabilizer. The autopilot was included in the control system in a differential scheme. Depending on the type and working conditions, the type of application, the number of crew members ranged from 3 to 5 people (3 pilot, flight operator and flight mechanic).

Main rotor - diameter 35 m, five-blade, with three-hinged mounting of the blades and hydraulic dampers. The blades are all-metal, rectangular shape. 20 sections consisting of a nose section with an anti-icing package and a counterweight, a tail section and an end fairing are attached to the steel one-piece tubular spar. The blades were equipped with an electric anti-icing system and a spar damage indicator. The pushing four-blade tail screw with a diameter of 6,3 m had a trapezoidal blade. The blades are wooden with a spar and steel tip, have anti-icing system and a sock trim.

The power plant - two gas turbine engine D-25V design Solovyov PA, power 5500 hp / 4045 kW. The engines operate independently, which makes it possible to fly with one engine running. Each engine has its own oil system with oil cooler and oil tank.

The chassis of the Mi-10K is a non-retractable four-bearing, truss with twin wheels and oil-air shock absorbers. The front have a lever wheel suspension. A truss guard was installed on the tail boom.

The external suspension system of the Mi-10K mounted on a special frame inside the fuselage had a lifting capacity with a cable length of less than 25 meters - 11 tons, with a length of up to 40 meters - 8 tons. 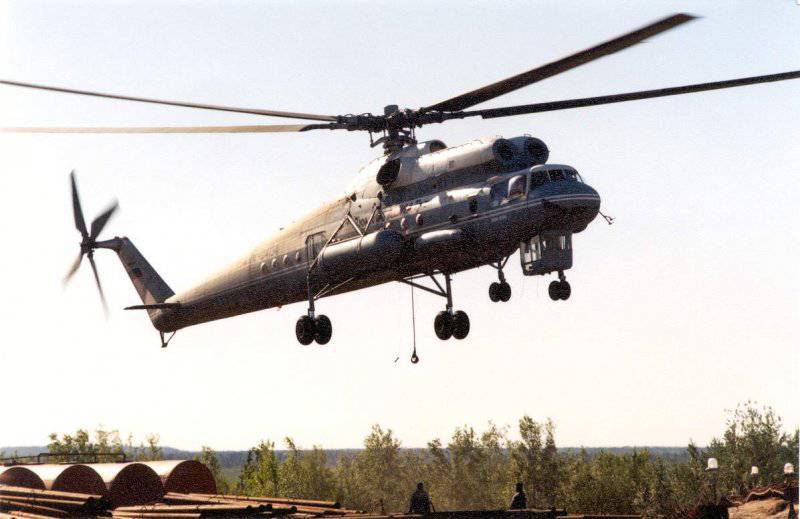 New modification created in a fairly short time. Flight tests began at GosNII GA. The first flight took place 6 September 1966 g. During the flight tests the machine was used in Leningrad for installation work and the mountains of Dagestan. Mi-10K in 1967 was presented at an aviation show in Paris. MGA in 1969, the year took the car to supply officially. Production began in the 1975 year at the Rostov helicopter plant (in just two years 17 helicopters were built, and the 4 was refitted from the Mi-10). Mi-10K used in the construction of high-rise objects and in the present. The Mi-10 and Mi-10K helicopters were used for transportation, when building drilling rigs in the oil-and-gas producing areas of the Far North and Eastern Siberia, and for unique installation work during the reconstruction and construction of industrial enterprises, significantly reducing the cost and time of work.

The Mi-10K helicopter during the reconstruction of the Gorky Automobile Plant carried out special installation work. The car lifted and laid on the roofs of three workshops in the carved openings two sloping galleries of tons of 6,2 and 7,3. If during the work they didn’t use a helicopter, then the assembly line of passenger cars had to be stopped for three months and the cranes installed directly in the workshops. With the help of the Mi-10K helicopter in Paris, the factory bridge crane with farms weighing 11 tons was dismantled.

Also, with the help of Mi-10K, a unique work was successfully completed at the Kostromskaya GRES. At the top of the 250-height pipe for meters, the Mi-10K helicopter pilots helped to install 150 tons of steel structures.

In 1980, the Ukhta division of the "flying cranes" used for the first time in world practice two helicopters simultaneously for the installation of heavy metal structures. A relay mast assembled on the ground with a length of 100 meters and a mass of 40 tons, mounted on the turn points, was raised by two Mi-10K to a vertical position. The following year, similar work was carried out in the Tyumen region. 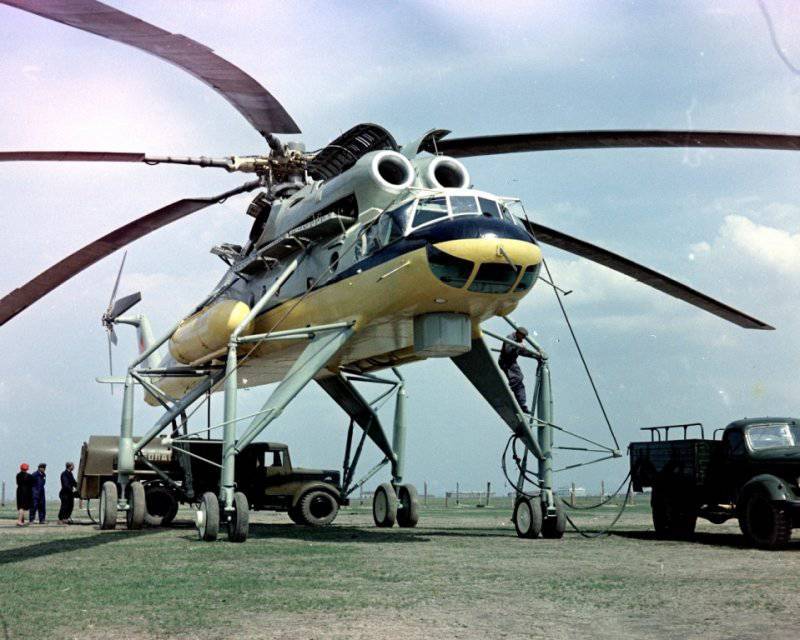 This unique aircraft at one time played a prominent role in strengthening the position of the Soviet Union as a great helicopter power. Cost center them. M.L. Mile, having developed the Mi-10K, gained invaluable experience in the development of heavy crane helicopters. 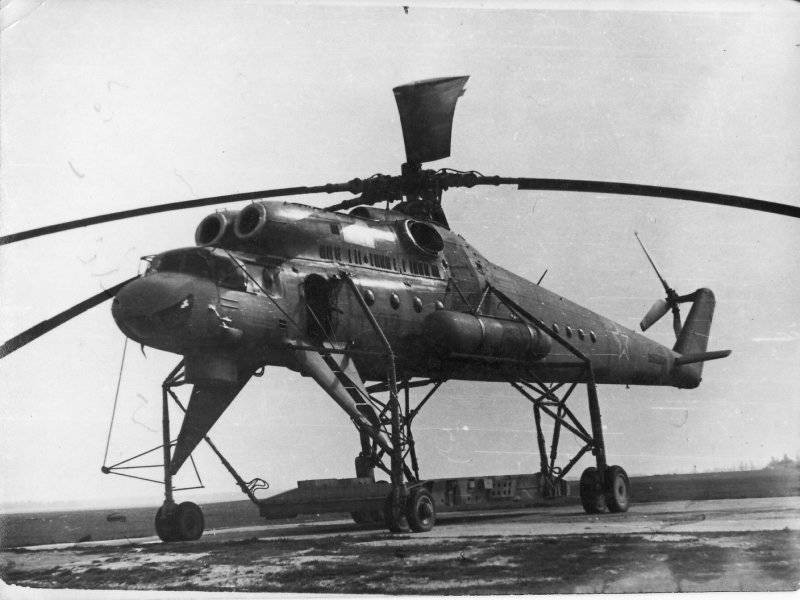 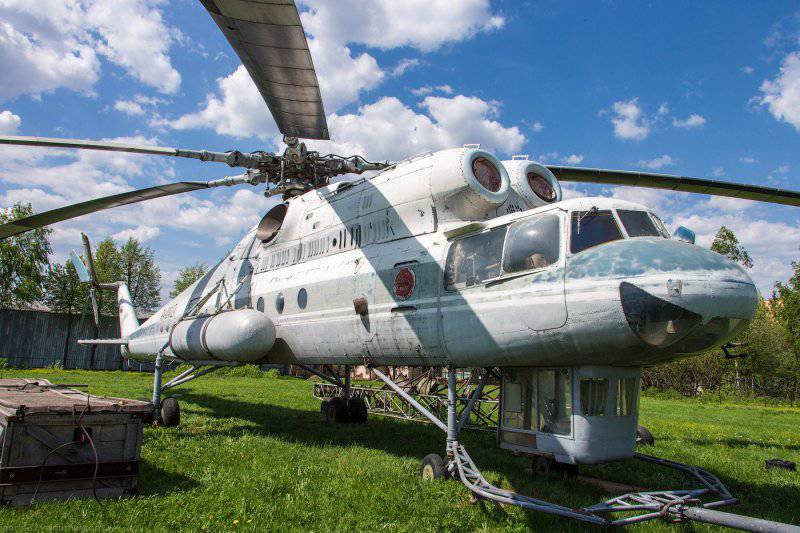 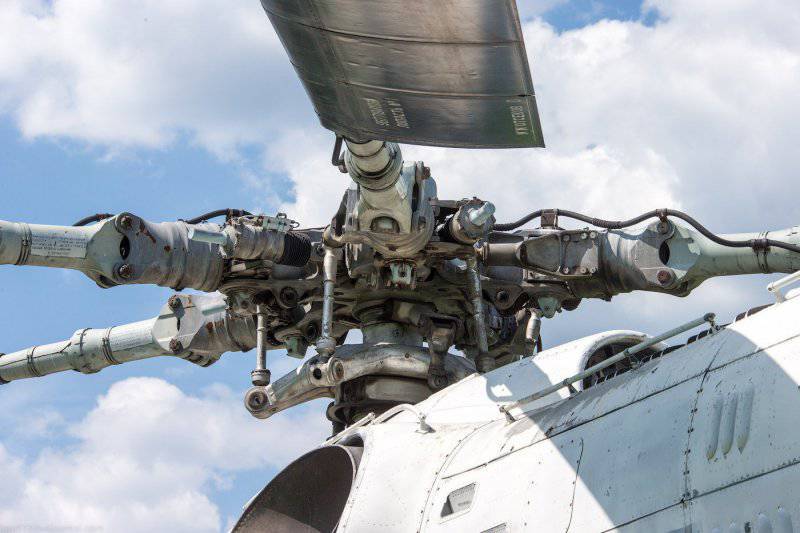 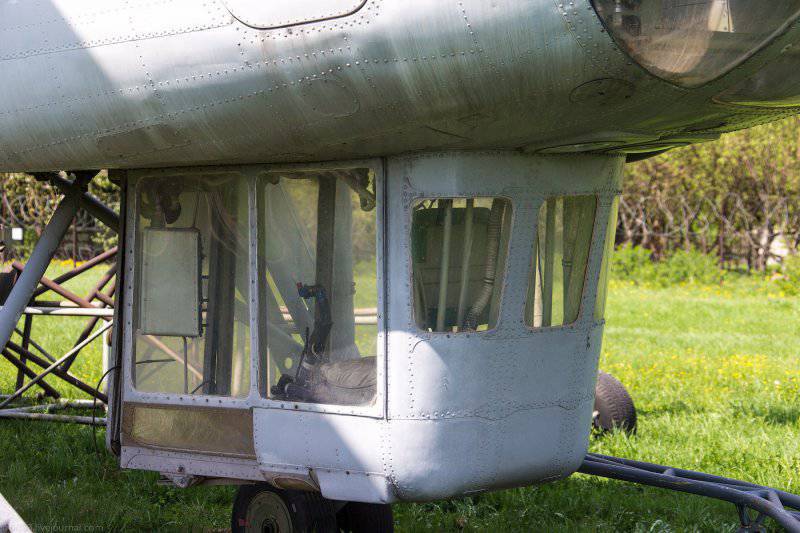 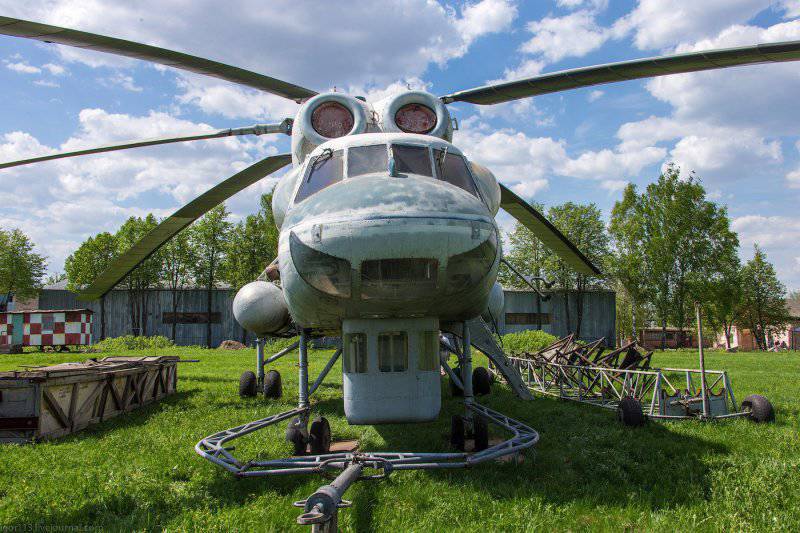 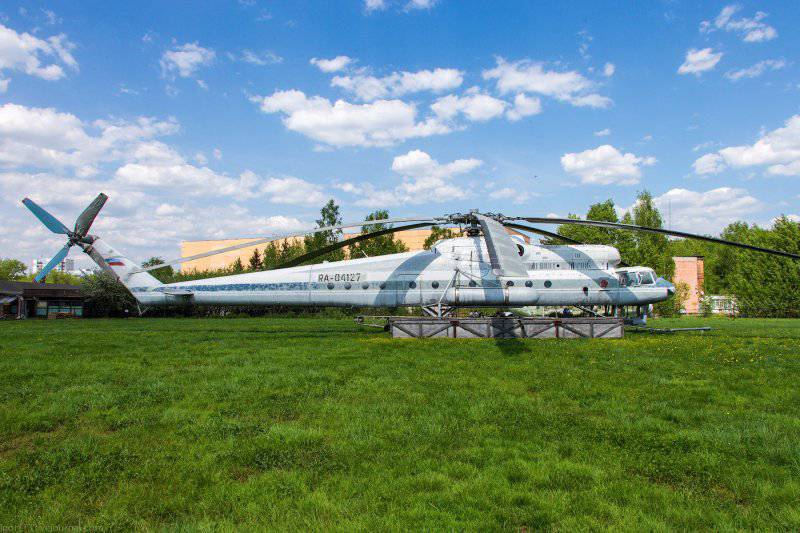 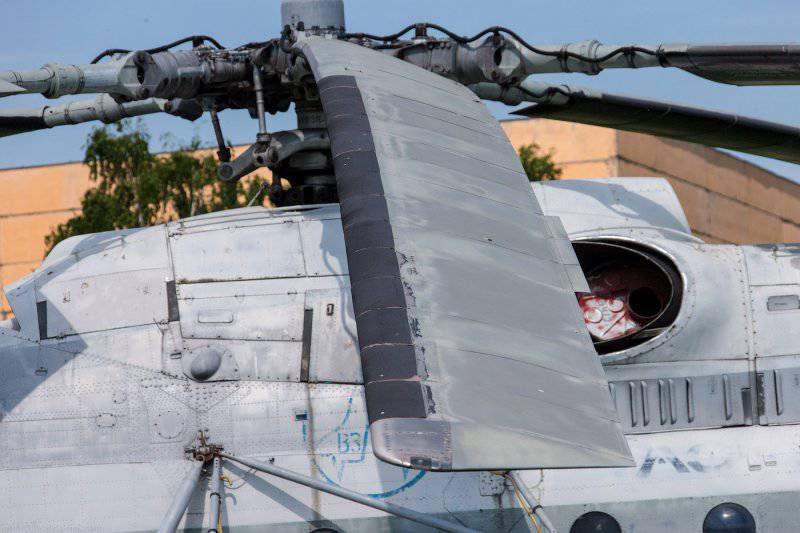 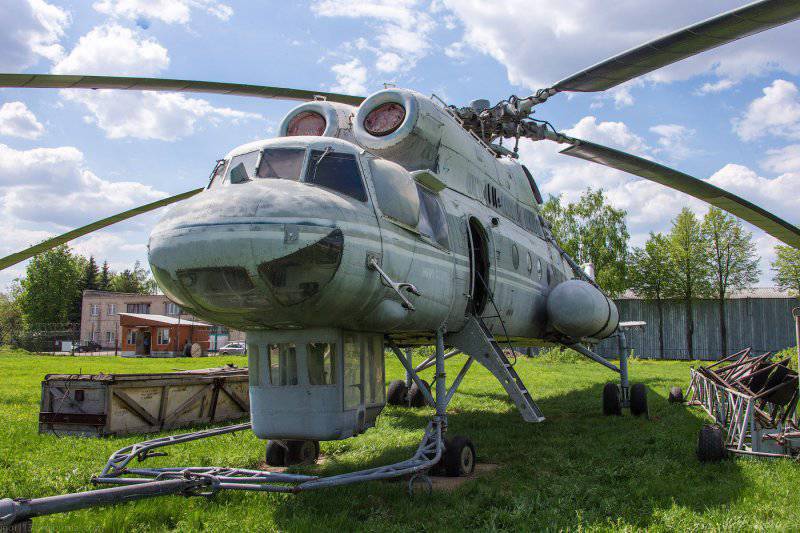 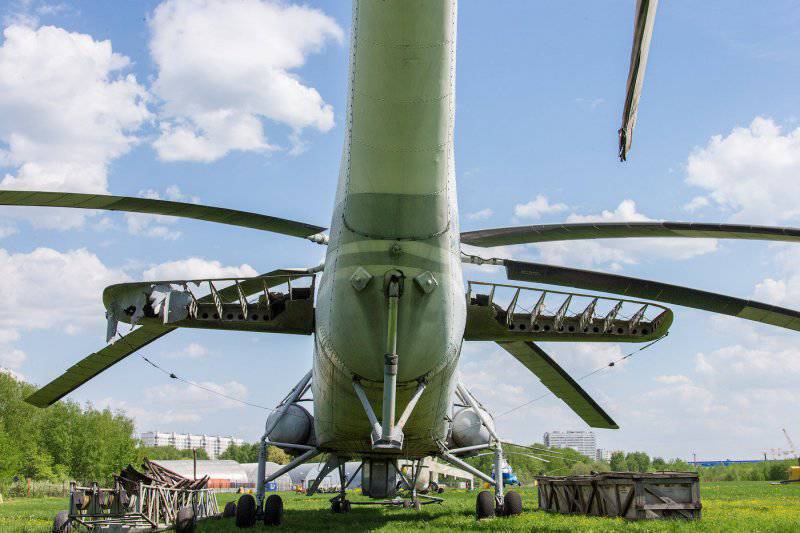 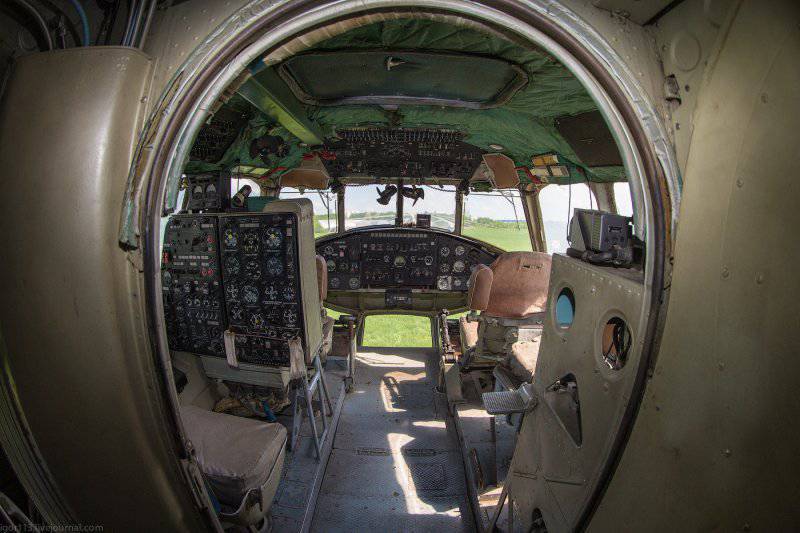 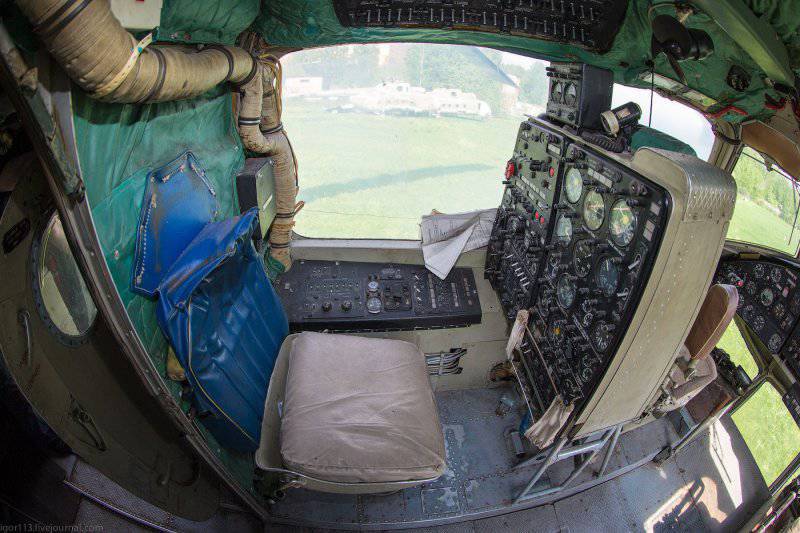 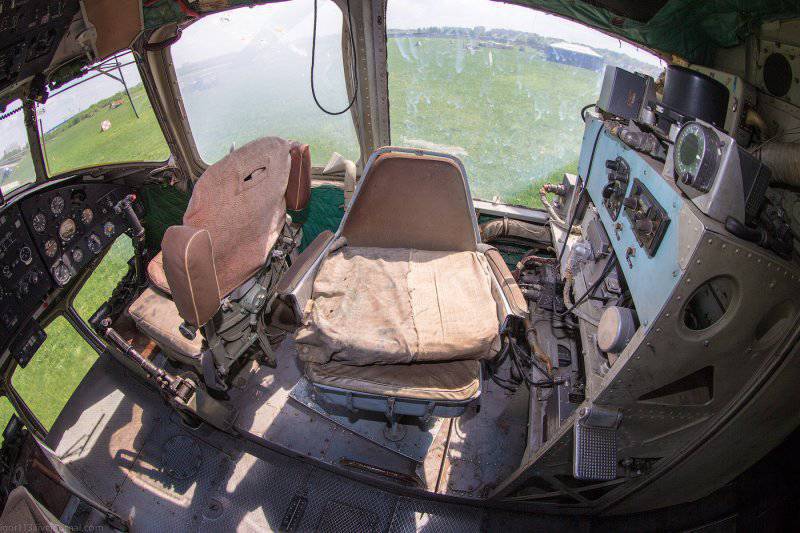 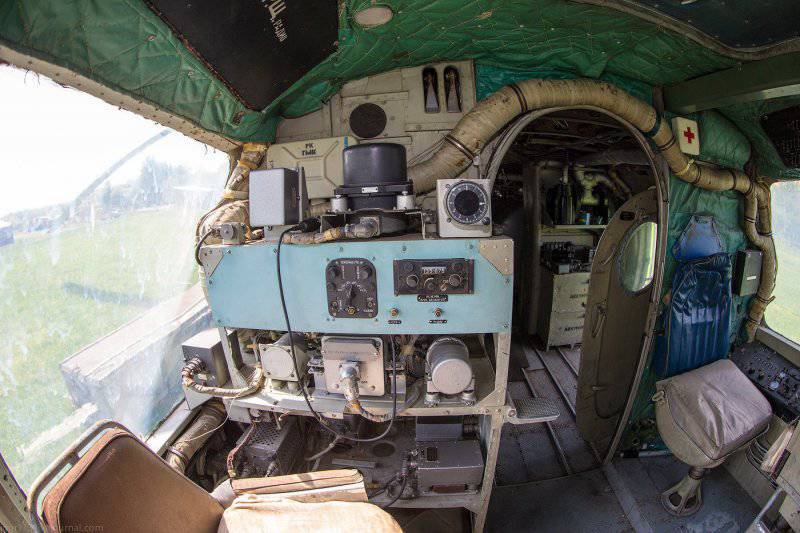 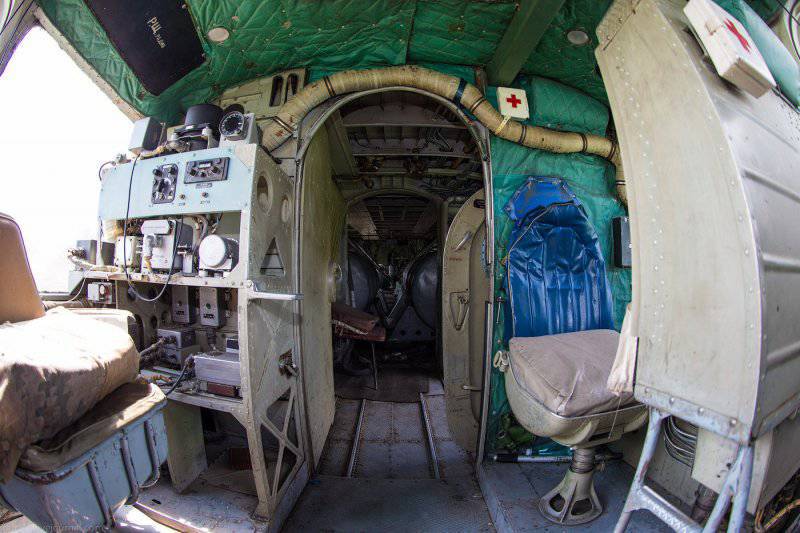 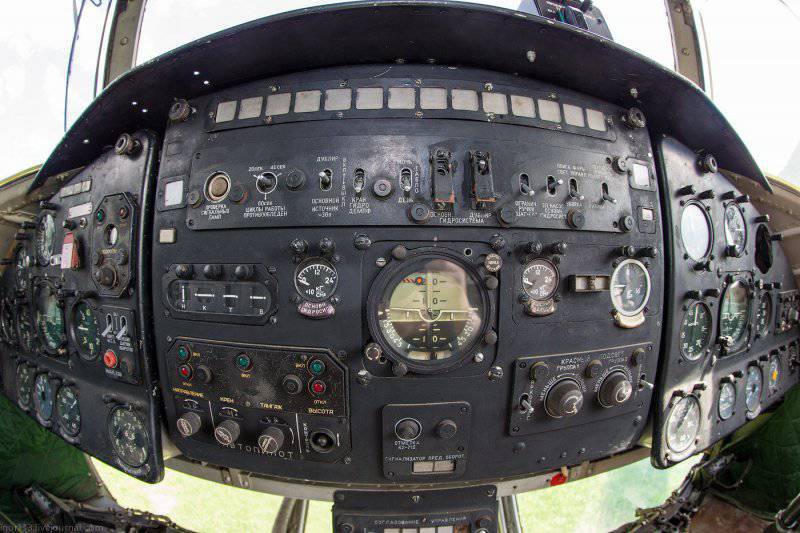 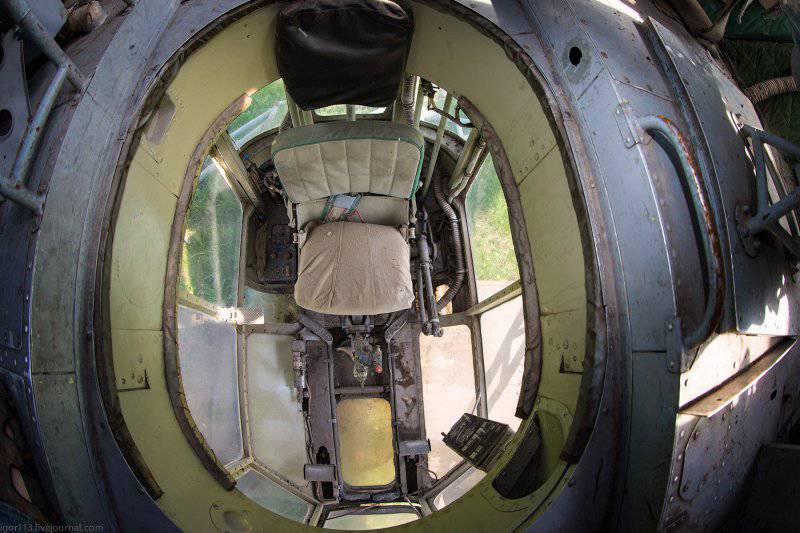 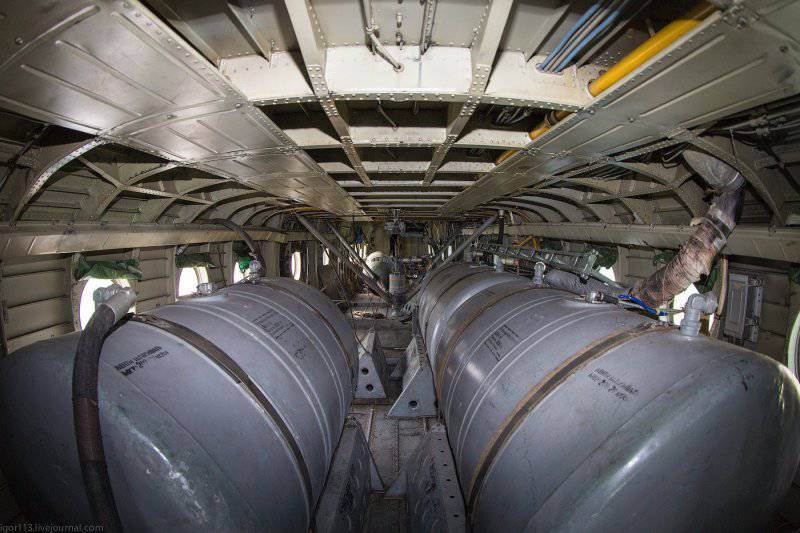 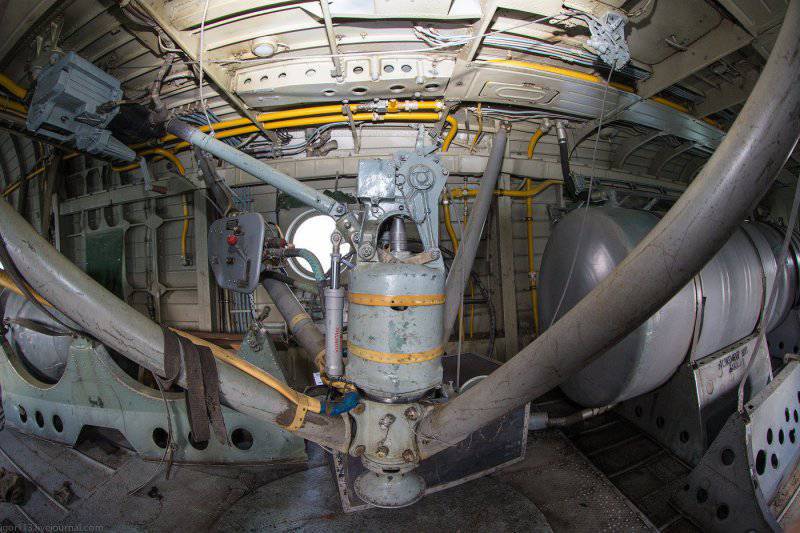 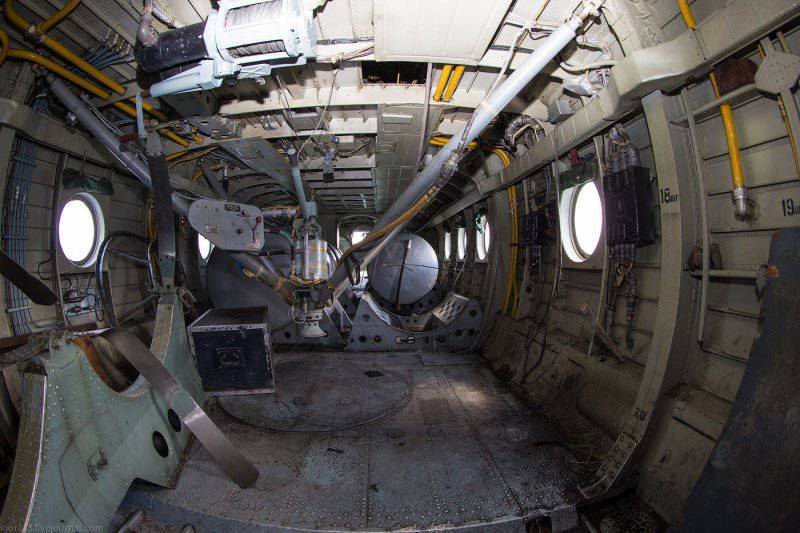 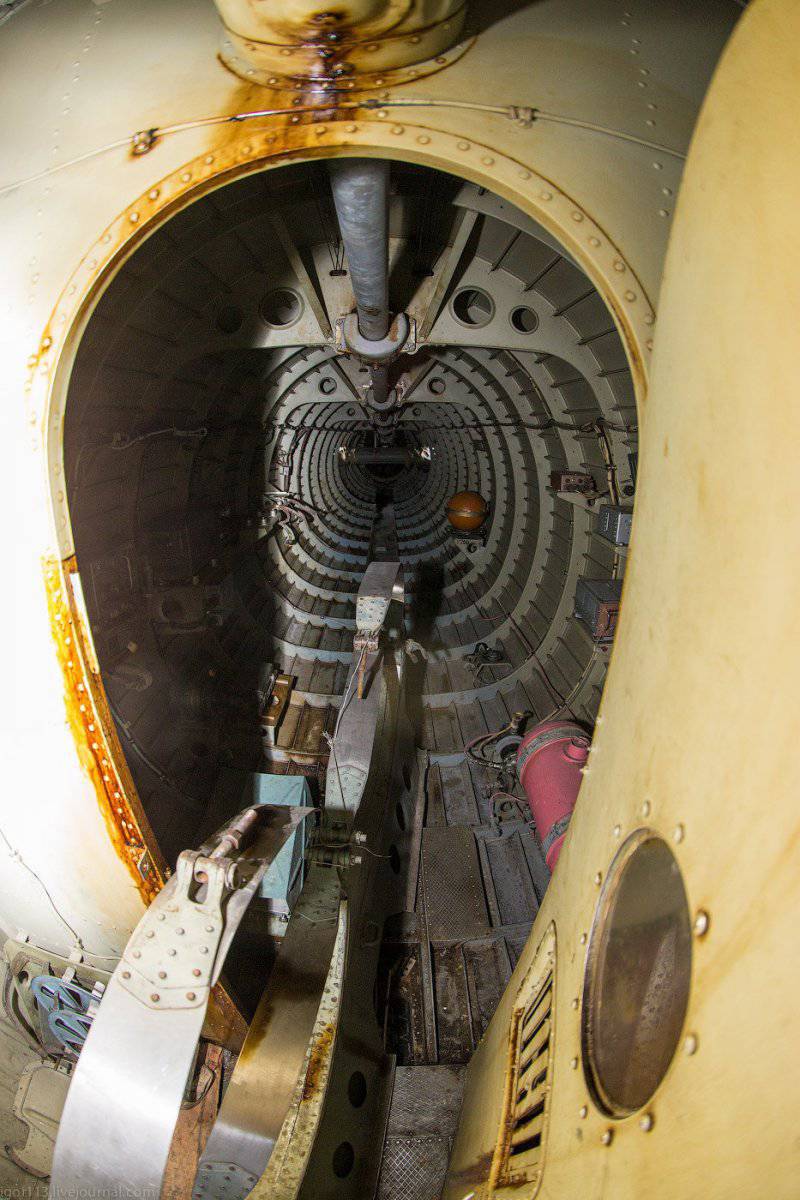 Ctrl Enter
Noticed oshЫbku Highlight text and press. Ctrl + Enter
We are
Mi-28 - combat helicopterAn-12 in Afghanistan
12 comments
Information
Dear reader, to leave comments on the publication, you must to register.