The price of the English "democracy" 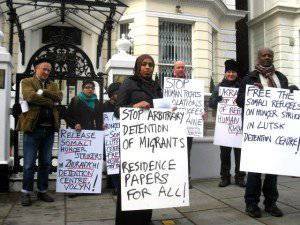 The “stronghold of democracy”, which is actively used by the UK in mentoring with the outside world, once again collapses and allows everyone to see the true face of the leaders of this country and their aggressive policies.


More recently, we all witnessed the “struggle for democracy in Syria” proclaimed by London, which, as a result of the “help” provided to the Syrian armed opposition, turned into rampant banditry and terrorism in this country, leading to the unjustified death of thousands of civilians.

Through his actions in the international arena, official London repeatedly tried to emphasize that “in the name of democracy” he is ready to do much only to help people living outside the UK to gain access to common values ​​and improve the living conditions of citizens of other countries and the future of their children. It is for these reasons that London, with the banner of "democracy" unfolded by it and with bayonets in addition, took an active part in the armed invasion of Iraq, Libya, Afghanistan, and was ready to continue this "cause" in Syria and in any other part of the world. The consequences of these "democratic" interventions on the face: a destroyed economy and infrastructure, poverty and the constant threats of banditry and terrorism in Iraq, Libya.

We note here that the official London did not take any such steps disinterestedly, but to gain access to the national wealth of the countries, in the intervention of which he is always ready to take part. After all, this was the case in Iraq, Libya, where the main price of the armed invasion was access to the energy resources of these countries. Although why be surprised? “After all, this is just a continuation of the imperial colonial policy that London has led on many continents for centuries, pumping out other countries of wealth, condemning the local population to poverty and slave lawlessness.

But over the years, nothing has changed, neither in the English perception of the world, nor in the policies pursued. Yes, there are new faces in the national establishment, new slogans, with the help of which British politicians lure trustful people into the beautiful words. It happened just now, when London began trying to portray itself as a "defender of democracy." And what happened in reality?

Between 2001 and 2011, when Labor was in power, the British government argued that labor migrants are needed for economic development. Then in the UK began to observe an immigration boom: nearly four million immigrants arrived in the country. However, the Labor leader recently admitted that in terms of immigration policy, his party had missed and the doors of "democratic England should be closed to foreigners." It was not the “democratic” campaigns launched in the national media against immigrants of all stripes. Even not only people from Asia or Africa, but also members of the European Union, whom London began to divide according to racial and national principles.

For many months, the Cameron government has supported and artificially promoted information campaigns against immigrants in the national press, making them guilty of the financial and social failures of the current government, instead of limiting military spending, especially on military actions in Iraq, Libya, Afghanistan, Syria. In particular, it is increasingly possible to see in the British press information that almost three-quarters of young mothers in London and other major cities of the country are foreign migrants. Migrants are accused of unjustly receiving social benefits, various benefits, the national media state that they should not move freely, not only in the country, but throughout Europe. There are calls to legally restrict the rights of migrants, to start a campaign in the media on the anti-advertising benefits of the UK in order to reduce the interest of migrants in this European country.

Very indicative in this regard, organized at the end of November of this year. British Prime Minister D. Cameron campaign against migrants, poisoned the political climate not only in the UK, but also in Europe and beyond. Having published his vision of migration policy in the Financial Times under the heading “Free movement in Europe should be less free”, D. Cameron proposed a whole program of actions against immigrants, including legislative restrictions on their movement in Europe, rights in England, and termination of social benefits. . He suggested starting such “democratic processes” with the citizens of the European Union - Bulgarians and Romanians, as representatives of the “second-class” countries.

The statements and actions of the British Prime Minister were criticized not only by public organizations, but even by European Commission President José Manuel Barroso, who reminded Cameron “Democrat” that free movement in Europe is a fundamental principle of the EU and must be implemented by all members of this union. Moreover, it is noteworthy that at the end of 2011, the European Union rather sharply criticized English “democracy” for its policy on foreign migrants and demanded that the UK change the rules for issuing social benefits so that not only those who have the right to reside in the country could receive them. The EU even threatened London at the time that it would sue the government of the country if the authorities did not present a plan to lift the restrictions on receiving social benefits for migrants within two months.

Under these conditions, official London found, as it seemed to him, a very “solution” for himself and other representatives of Western Europe. In particular, on his initiative, which was picked up by other European “pillars of democracy”, the EU made a proposal to Latvia: in exchange for reducing public debt, significantly increase the quota for accommodating migrants from Arab and African countries, actually becoming a haven for uncomfortable for Old Europe immigrants. Indeed, according to the current rules of the European distribution of quotas, it is the European Union that determines how many countries each member of the EU is obliged to accept migrants, regardless of the will of the indigenous population. It is not surprising that such a proposal was made precisely to Latvia - one of the post-Soviet states that have joined the EU, and many Europeans do not hide their attitude to it as a stepdaughter and an obvious burden in private conversations.

Here you have the price of European integration, to which the population of this Baltic country so aggressively sought.

I wonder if they know about it in Ukraine? After all, Ukraine on the territory significantly exceeds Latvia and here you can accommodate much more foreign European migrants! And what else do Ukraine need for European politicians and, above all, for the British, who so vehemently rushed the Ukrainian authorities for not wanting the EU to become an associate member of this “democratic” union on the conditions clearly unfavorable for this country.

Ctrl Enter
Noticed a mistake Highlight text and press. Ctrl + Enter
We are
Interview by President Bashar Al-Assad to the Sunday TimesKurdish question in modern Syria
27 comments
Information
Dear reader, to leave comments on the publication, you must to register.