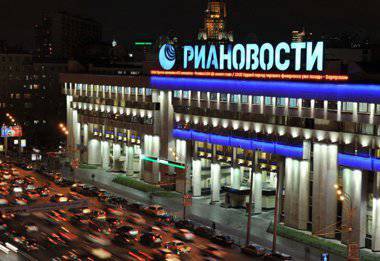 The reaction of the liberal radical circles to the creation of the Russia Today news agency speaks of the timeliness of its emergence.


As expected, numerous "independent experts" very unfriendly perceived the landmark liquidation of RIA "News". And then they met with hostility the equally significant appearance of the media holding “Russia Today International News Agency”. Given that the television journalist Dmitry Kiselyov has already been appointed to manage the structure, the mood of critics of the changes is more than predictable.

In fact, the state stopped the protracted experiment in transforming the still Soviet structure of the Novosti Press Agency (APN) into something useful and relevant at the current stage. From a megamachine that broadcast the image of the USSR to all kinds of corners of the globe, a modern news agency was to be obtained. Did not work out.

Alas, RIA "Novosti", having considerable budget funds and access to news sources, has remained the factory of ever lagging behind, mediocre and most unfriendly "unfriendly" to the Russian state.

Of course, now the former head of RIA Novosti, Svetlana Mironyuk, has the right to evaluate her creation as “the best media in this country, created with state money.” Only, as they say, from the most visible. For example, Konstantin Remchukov, editor-in-chief of Nezavisimaya Gazeta, you can’t suspect him of servile loyalism, said that the agency’s employees “almost, one could say, almost couldn’t cope” with the function of the state media.

Of course, you can write poisonous posts, which the authors of liberal media did. Vying with one another, they praise the "achievements" of RIA Novosti. They come up with colorful epithets of the agency being liquidated: “live, with live content”, “considered the audience in all its complexity as its customer”, “generously, talentedly, inventively invented technologies and distributed them to other people”, etc.

At the same time, everyone understands that behind such dithyrambs there is something more hidden than ordinary shop solidarity and sadness for those leaving (with prestigious work). The resource, which possesses “armaments”, which are infinite by the standards of current information wars, disappears from the forefront. It seems that blogger Dmitry Olshansky in his “Facebook” described the mournful feeling of liberal elitarians best of all: “The day of parting of the uncompromising anti-Putin intelligentsia with a lot of government funding from the bloody Putin regime. And how now? ”.

The reverse side of the collective experience of an unaccustomed situation was the undisguised dislike of Dmitry Kiselev, who was appointed general director of Russia Today.

I would like to get away from the theme of Western influence, but one can not help but feel the general tone set by the publication in the Guardian newspaper. They titled the relevant material as follows: "Putin appointed the leading homophobe head of the state news agency."

DW (“Deutsche Welle”), in turn, spreads the annoyance of a certain Igor Yakovenko, represented by the head of the Public Expertise Foundation. He claims that the Russian leadership needed to “put at the helm of a new media holding a propagandist who will operate this lie-making machine”.

The authors of Ekho Moskvy, based in Russia, are zealous in insulting epithets addressed to the state that made an attempt to influence the information policy of the media, which belongs to him. Without fail, a stale image about the “advance of the dead” was brought to light. Dmitry Kiselyov himself is a representative of a “mediocre, dead, wooden” environment in the eyes of a liberal asset. They call him here a propagandist who "has no equal in the ability to sprinkle saliva, throw poop and spew bile towards foreign countries."

In all likelihood, it is very difficult for too many to come to terms with the idea that one of the leading TV people can adhere to some other, different from pro-Western and ultra-liberal, views. It is even more difficult for this public to survive the shocking fact: the state not only paid attention to the “dissident”, appointed to lead one of the most prestigious, but also difficult and responsible information directions.

However, Kiselev exactly on the international broadcasting his career and began. Perhaps now the world, and at the same time with it many Russians, will learn more about Russia. The one that does not fit into the framework of depressive negative, inferiority, cheap “fun-zakazuhi”, which have become the usual content of liberal-oriented media.

Ctrl Enter
Noticed oshЫbku Highlight text and press. Ctrl + Enter
We are
List of destroyed the largest and most high-tech enterprises
27 comments
Information
Dear reader, to leave comments on the publication, you must to register.