December 11 2013
178
Finally, the Ukrainian government began to act. Beginning with the assault of the 24 Cabinet of Ministers on November, the Ukrainian government fully deserved accusations of inconsistency and irrational use of force. Speaking about the events in the center of Kiev on Monday-Tuesday, we can already point out a purposeful struggle against people who have been sold out from impunity. 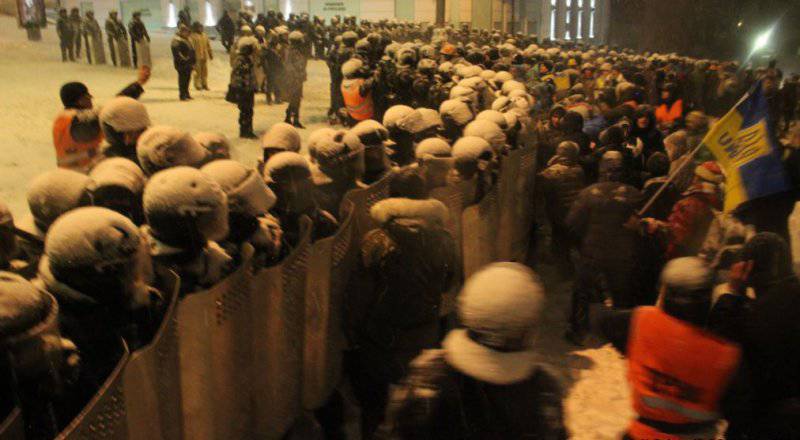 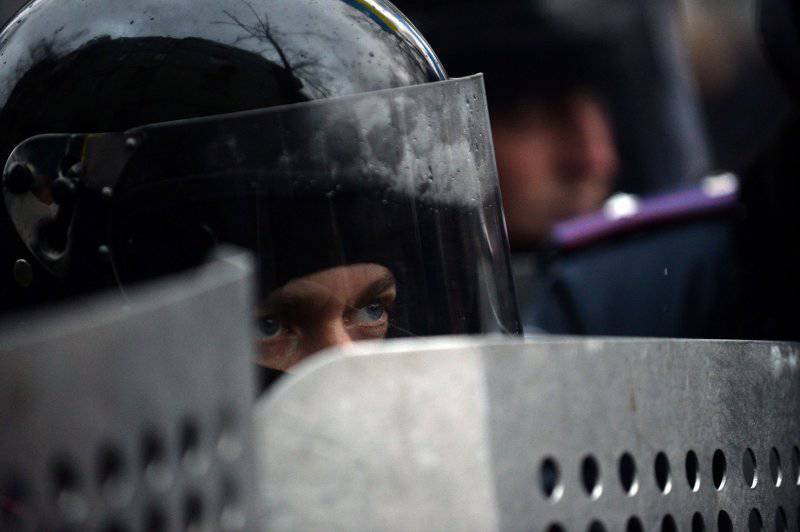 The opposition has the main cover - “peaceful action”. Amazing Under the leadership of the leaders of “Maidan” (this is not exactly “Euromaidan”), the work of state institutions is blocked, the center of the multi-million city is blocked, attacks are made on police officers, and they all have “peaceful action”. In addition, the organizers of this “peaceful action” directly call for the storming of administrative buildings, to resist the police and to overthrow the legitimately elected government. And just try to touch the protesters intact! How so? They represent the "people" of Ukraine! So far, with the exception of a certain criminal proceedings, which will touch Yatsenyuk and Turchinov, nothing. Turchinov, by the way, is a shepherd of the word of life religious sect. It is not surprising that he has a place to practice oratory. As a rule, his performances from the stage are held under a curtain, immediately before any illegal actions of the crowd. 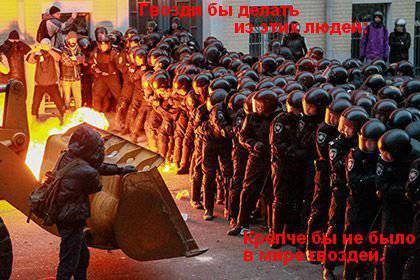 Those who attacked conscripts of the Ministry of Internal Affairs, who have already been compared with the heroes of the movie “300 Spartans”, the Cabinet, broke the windows in Kievrad, the leaders of this gathering are called provocateurs and “titushki”. Like, it's all the machinations of Yanukovych and the Russian special services. Well, who, if not the "oaths of moskal", are to blame for everything! .. The only exception is the demolition of the monument to Lenin by the vandals, the responsibility for which was taken over by the "Freedom" of the Volga. With monuments "heroes" is not afraid to fight. Monuments have no batons yet ... 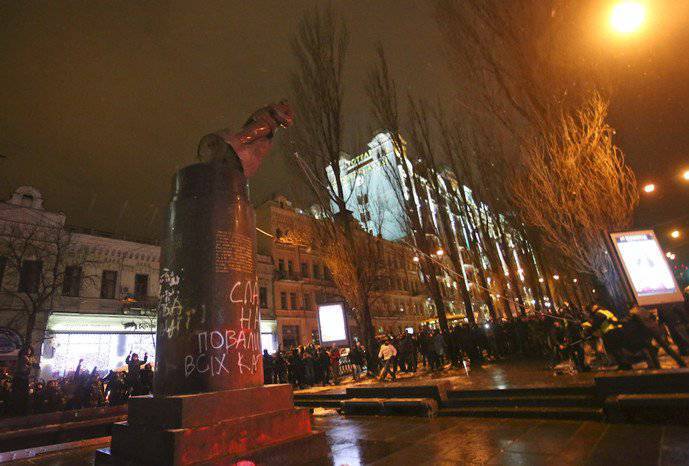 The more “peaceful” opposition leaders throw up their hands, looking for traces of “titushki” in the events of December 1, the more facts fall out of their sleeves. Their involvement in the events on Bankova is really indirect. Their appeals served as a breeding ground for fascist radical organizations, which soon claimed responsibility for their actions.

Almost everyone has heard that the organizer of those battles is Korchinsky. This strange character has already been noted among the participants in a number of conflicts in the Caucasus. According to rumors, he fled to Chechnya and from there he is now voting in social networks. He really was on Bankova and even climbed a grader, but the degree of his participation, as well as the degree of participation in the conflict of his “Brotherhood” and some other organizations, is difficult to estimate. In addition to the “Brotherhood”, the Black Committee and the Right Sector participated in the mockery of the conscripts. However, the key role belongs to the SNA (Social-National Economic Assembly). More precisely, their cell "Patriot of Ukraine". These fascists obviously prepared. They began the attack on the equal ranks of the real patriots with the help of chains and bits. In the crowd, they were easily distinguished by yellow armbands with a black symbol resembling a swastika. They are clearly not deprived of imagination: they even stole the coat of arms of the Third Reich. It is the members of this organization who are being trained for combat operations in the Carpathians. Well, supposedly they play airsoft ... 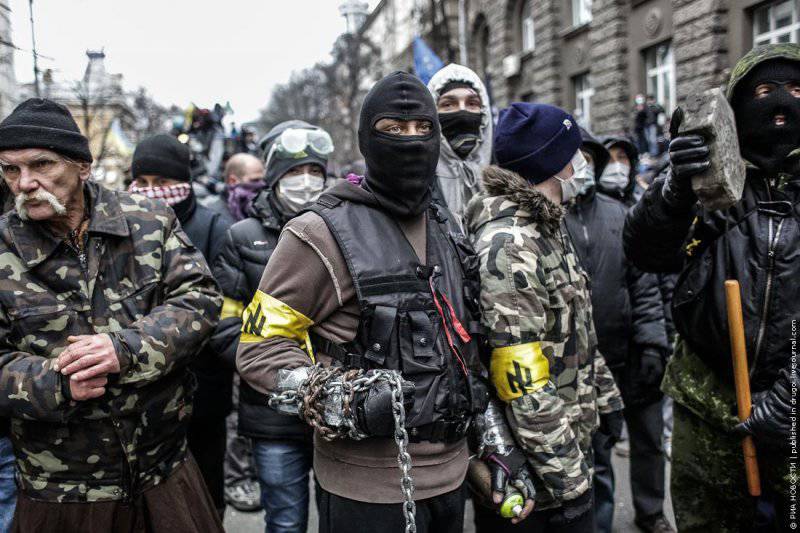 “Heroes” quickly fled when the “Golden Eagle” arrived in time and launched “arguments” (police batons of the PUS-1 series, PUS-2, PUS-3 series) ... Two in their hoops, which, according to some Ukrainian gossipers, “ they unleashed the massacre, in fact they were simply pressed into the conscripts by the brutal throng. Apparently, they, like some other simple demonstrators, tried to prevent a collision. However, other demonstrators were less fortunate - they were beaten by “fearless” “heroes” who stormed the guys from the Ministry of Internal Affairs.

The man who commanded the grader turned out to be not at all the commander of the Berkut special regiment of militia Sergey Kusyuk ...

But the opposition needs a sacrifice. Beaten "children" from the night dispersal of "Maidan" sooner or later lose their potential as an argument against power. It is here that their direct interests are visible in the force version of the development of events. People with the symbolism of “Patriot of Ukraine” (the same distorted swastika) were noticed in the ranks of the so-called “self-defense units”, which, despite the peace-loving statements of opposition leaders, are trained precisely in opposition to the police. Thus, it turns out that those who attacked the police at the presidential administration are still among the “peaceful” protesters, more precisely, they are now seeking protection on the Maidan, trying to avoid responsibility. 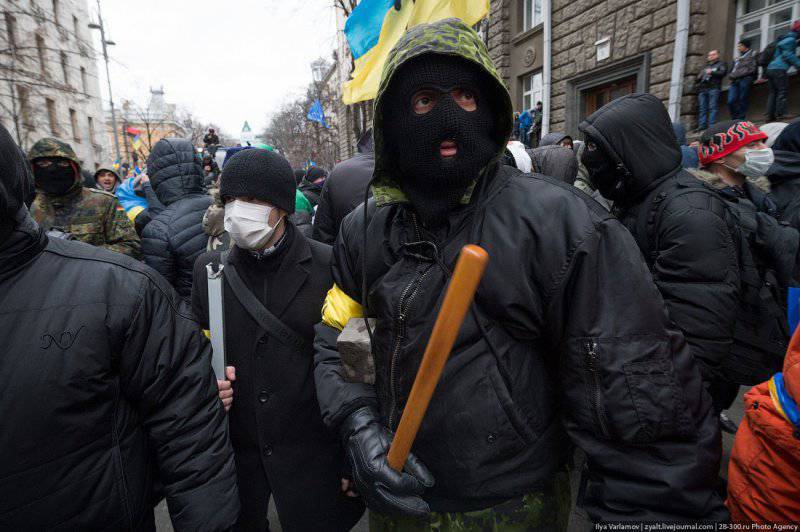 Now about the acceleration of "Maidan" on the night of November 30. Everything began quite calmly: the utility workers began to deliver equipment for the installation of the New Year tree, and the Berkut and police officers gradually pushed the protesters without using brute force and avoiding direct contact. The protesters who illegally occupied the area were asked not to interfere with the mouthpiece and leave the territory. In response, the security officials met a hail of stones. The last straw was a hot log that flew into the squad leader. After this, "Berkut" simply had no choice but to use batons against angry students. At first, the false opposition media tried to present everything as an attack on "peaceful" (but how about!) Students ... But now they suddenly changed their position and began to call those who resisted the police, "provocateurs." But stones are stones, that of "provocateurs", that of students, how not to call those who throw them. The only thing that did not have to pursue the runaways and significantly limit the use of force - not to beat the bedridden, when it is enough just to eliminate the threat of resistance from their side.


It would be amusing to see how far the opposition leaders would go to do socially useful work for their appeals, supported by the seizure of government institutions, in the countries of "democracy". They are wildly outraged today by the "cruelty" of the Ukrainian police - against the background of how cavalry demonstrators are crushed in Britain, how the police beat women in the face and drag them by hair in the USA, as they shoot at their feet with rubber bullets in Spain ... There it is called "mass unrest, ”and in Ukraine it is a“ peaceful action. ” 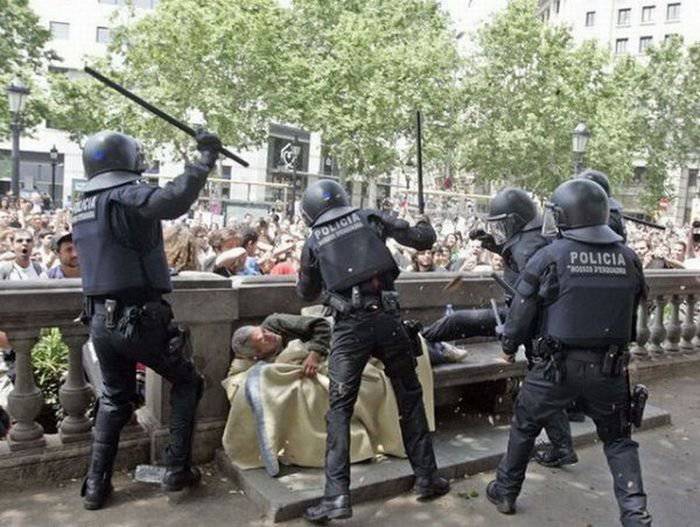 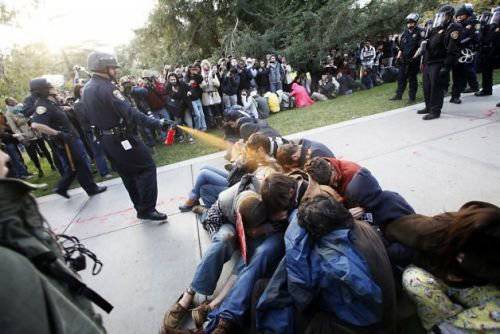 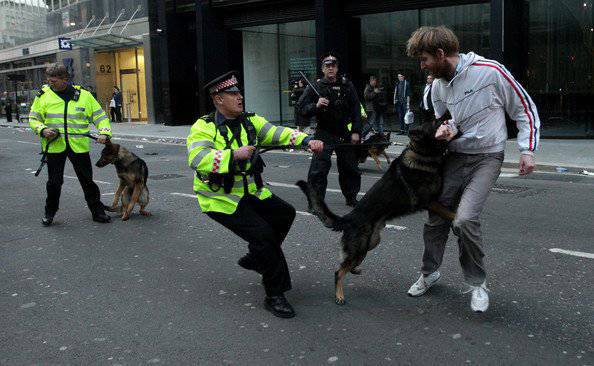 At the opposition rallies there are always flags of the UNA-UNSO and UPA. This Sunday, the UPA flag was raised in front of the Cabinet and on the site of the demolished monument to Lenin. No matter how the opposition tries to dissociate itself from the radicals in its ranks, the truth becomes obvious. If the opposition is not able to control its supporters, then why should they be heated up with loud meaningless slogans and call for offenses? The opposition benefits the radicals, and the radicals benefit it. There is nothing strange in the fact that the SNA are offended by the opposition leaders for insulting them, calling them “titushki” and “provocateurs of power”. After all, it turns out that they were simply used further, as they are not needed, they will simply be thrown away.

Today's Euromaidan gathers the beggars who live in the center, the vast majority of whom drink drunk, causing Kievians with their inconvenience. But outraged Kiev residents will not show opposition channels. 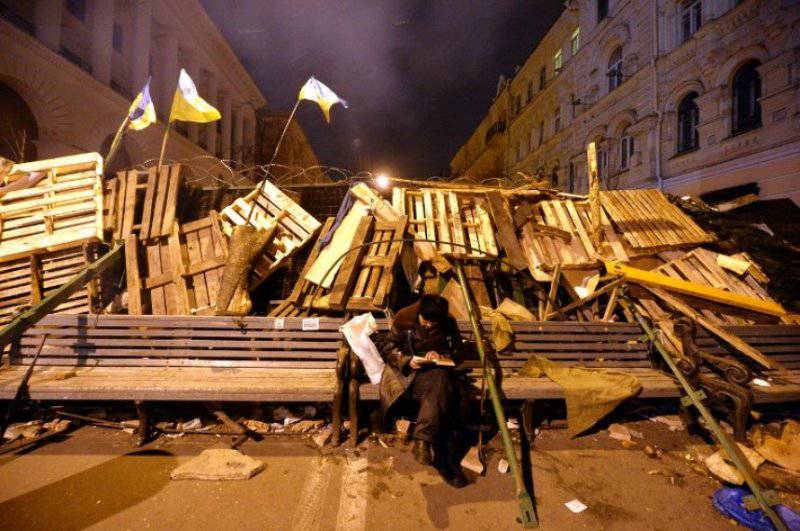 The opposition has become impudent from impunity. Substitution of concepts and lies - these are the only ones. weapon. They have already composed their technical government, which Senya Yatsenyuk should head, Oleg Pyagnibok will be Minister of Internal Affairs, Viktor Pinzenik, Minister of Finance, and Irina Fahrion, Minister of Education, will not hesitate to insult the Prime Minister in the Rada and, in times of them, having been a member of the CPSU, later became an ardent nationalist. With such a minister of education, children in schools will have to greet the teacher with an exclamation “Glory to the Heroes!”, Memorize the biography of the “hero of Ukraine” Stepan Bandera, singing the UPA hymns in music lessons ...

In any case, representatives of the West arrive in Kiev. Their goal now is to convince Yanukovych that if he puts forward EU counterclaims in the interests of Ukraine instead of simply signing an unprofitable association for millions of Ukrainians without elements of compensation for damage, he can simply repeat the fate of Leonid Kuchma. About 270000 protesters (based on the calculations of the Kiev mathematician and businessman Yuri Lazebny, who used the calculations people per square meter), and not a million or one and a half assembled the "Maidan" on December 1. It was a peak. Everything according to the old scenario: “victims”, the opposition, which does not make concessions until the government’s resignation, “the people on Maidan”, who allegedly do everything spontaneously. Even the flowers for the police have already passed ... 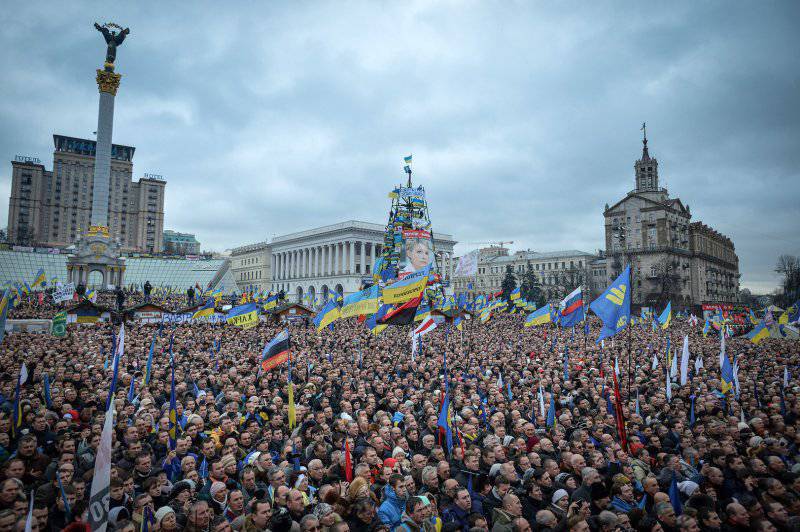 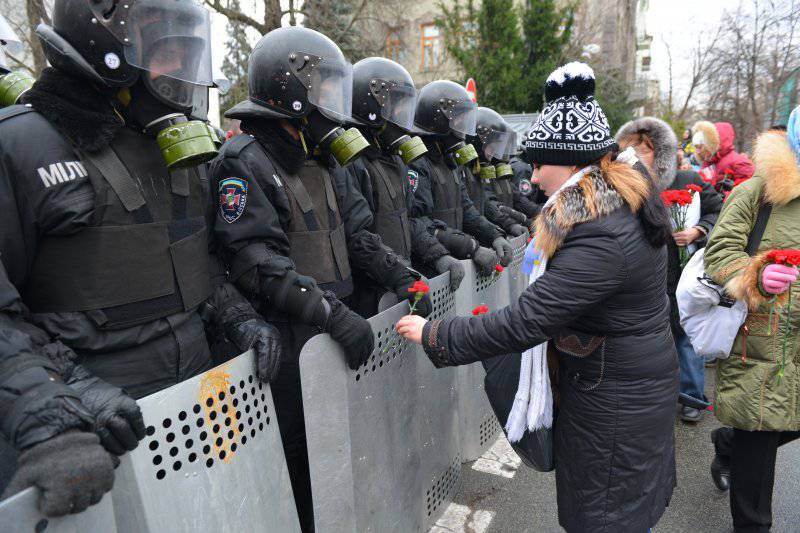 The organizers of the Syrian war also forced the Syrian tribal leaders not to negotiate with the legitimate authority. And now what? Now in Syria - the war in which the majority united around a single leader and the government army.

Ukrainian society is not yet ready for war. The fighters of the internal troops and the "Berkut" on Monday and Tuesday acted in the same way as at the beginning of the events on the "Maidan" on the night of November 30 - they pushed aside the protesters. "Self-defense units" tried to push, but it was useless. Despite the aggression and the presence of radicals in the ranks, they did not try to throw stones at the police, and therefore the police did not need to pacify them. Despite the "battle losses", the police dismantled all the "roadblocks" and barricades, finally establishing the long-awaited order in the government quarter. 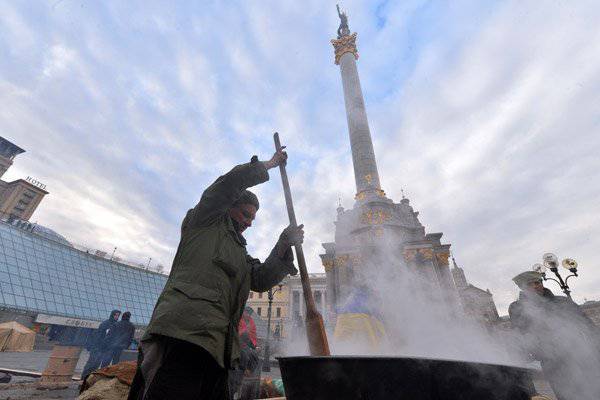 Two or three thousand militants on the Maidan, hundreds of thousands of protestors on weekends and opposition leaders hiding behind them, while unable to resist the common sense of the majority of Ukrainians. The authorities should not be afraid to show the opposition that illegal actions are punishable, and parliamentary immunity, the substitution of concepts and deceitful media are incapable of saving them from the law.

Ctrl Enter
Noticed oshЫbku Highlight text and press. Ctrl + Enter
We are
Political technology centers MaidanCivil war in Ukraine: on the trigger
178 comments
Information
Dear reader, to leave comments on the publication, you must to register.