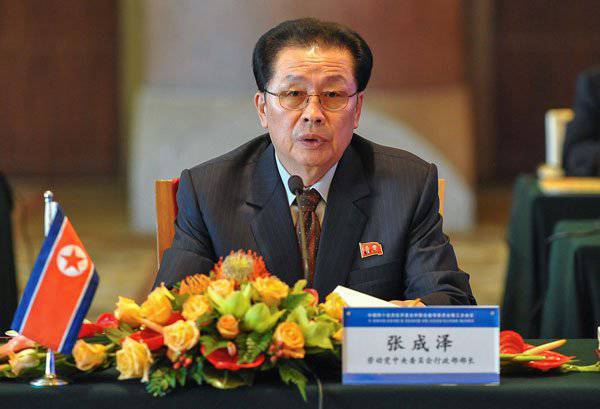 The leadership of North Korea are large-scale stripping. In Pyongyang, reports appeared a week ago that Chan Song Taek, who was considered the second person of North Korea, who was called the "gray cardinal", lost all his posts and was expelled from the Communist Party. At the same time, the North Korean media showed footage of the arrest of Uncle Kim Jong-un. The “gray cardinal” was arrested during a Politburo meeting, in the presence of the commander in chief, Marshal Kim Jong-un. According to the South Korean media, the second man in the DPRK has already been executed. True, there is no complete confidence in this information, since the South Korean media have repeatedly spread misinformation about the events in North Korea.


More recently, Chan Song Thaek was at the top of the North Korean political Olympus. The right hand of the head of state, the main adviser to Kim Jong-un, the vice-chairman of the National Defense Committee, the head of the organizational department of the Central Committee of the Korean Labor Party, and finally the test of the founder of the DPRK, Kim Il Sung. Chan Song Thaek was married to the native aunt of state leader Kim Kyung Hee and was considered almost the regent of the young state leader who took over as head of the DPRK after the death of his father, Kim Jong Il. Now Chan Song Thaek is "a state criminal steeped in corruption and debauchery." He is accused of counterrevolutionary and anti-party activities, corruption, extramarital affairs and drug smuggling.

The throne under the "gray cardinal" reeled back in November, when a message appeared about the arrest and execution of his closest aides. At the same time, an influential politician ceased to appear in public. South Korean intelligence concluded from this that Chan Song Thaek was defeated in the struggle for influence over the DPRK leader. Thus, RK deputy Zhong Chun Re reported that experts on the DPRK believe that he may have lost the power struggle to the general director of the Korean People’s Army Politburo Cho Rhön.

According to South Korean intelligence, which has its own sources of information in North Korea, in the second half of November, two main assistants of the “gray cardinal” were publicly executed - Ri En Ha and Chan Su Gil. Sources from the National Intelligence Service (LDC) of South Korea reported that they are investigating many officials in positions of responsibility in various North Korean government structures. All of them are united by the fact of belonging to the “party of the gray cardinal”. At the same time, Pyongyang recalled the North Korean ambassadors in Cuba and Malaysia. Both of them are related to Chan Song Taek. Obviously, the matter will not end there, and the purges at the top and middle level of the leadership of the Democratic People’s Republic of Korea will continue.

South Korean sources also reported that Pyongyang had notified Beijing in advance that Chan Song Thaq would soon face political oblivion. The former vice-chairman of the National Defense Committee was highly respected and trusted by the Chinese leadership. He oversaw relations with China and the trade and economic zone located near the Chinese border. Therefore, Pyongyang tried to prevent possible negative consequences for bilateral relations. In China, this message was refuted, saying that they do not know anything at all about the resignation of Tran Sung Taek (this statement was made before Pyongyang’s official statement), not to mention that Pyongyang warned Beijing in advance.

In addition, the South Korean media have voiced a number of reasons why they shot the gray cardinal. In particular, the newspaper "Chunan Ilbo" reported that Chan Song Thaek had recently criticized the actions of Kim Jong-un, argued with the North Korean leader and also very freely conducted in his presence, undermining the authority of the leader. Thus, Chan Song Thaek spoke out against a sharp increase in the number of trade and economic zones (TEC). Their number will be increased to 14. In them, Pyongyang plans to attract foreign capital. Uncle Kim Jong-un believed that we must continue to develop two zones - Rajin and Hwangpphen. He was also opposed to the temporary closure of the inter-Korean industrial complex in Keson. This decision was made by Kim after rising tensions with South Korea and the United States. Chan Song Thaek behaved quite voluntarily during official events, which harmed Kim's authority and made him see a potential political rival.

December 9 received an official confirmation of the North Korean authorities about the deprivation of all posts and the expulsion from the party of Chang Son Tak. In the “Report on the extended meeting of the party’s political bureau,” circulated through the channels of the Central Telegraph Agency of Korea (CTC), “the Chang Sung Taek group was engaged in anti-state, anti-people criminal activities”. The activities of a criminal group violated a unified system of leadership and caused great harm to the state and the people. North Korea’s main party newspaper, Nodon Sinmun, has published a large article on this case.

At the same time in South Korea spread the information that Chan Song Taek was already executed. Seoul-based radio station Free North Korea reported that the “Chang Son Taek criminal group” was shot on December 5 at the location of the DPRK leader’s security service in the Ronson district of the North Korean capital. In Seoul, it is believed that the decision to displace Chan was made at a meeting of the Party Politburo not on December 8, as reported by the TsTAK, but a few days earlier.

It should be noted that North Korea is still a "closed country." The movement of information is very limited. Most News comes not directly, but through the second or third hands. Therefore, the internal processes in the DPRK are little known, and it is extremely difficult to evaluate them. Experts put forward a variety of assumptions about recent events. In general, everyone agrees that there is an increase in Kim Jong-un's sole authority. He conducts a “cleansing” of the circle that came to power under his father and puts new people completely dependent on him. This is common in stories of humanity. Indicative political processes and cleansing of the military-political elites - all this has already been repeatedly.

So, the following fact is quite indicative. During the funeral of Kim Jong-il for the hearse, in addition to Kim Jong-un, there were eight people. It was the “core of leadership” of the DPRK. So far, only two of these eight have retained their posts. And these are deep old people, who for 80 have been for years and they are de facto unable to conduct business for health reasons, occupying high positions only nominally. From the rest of the new leader of North Korea somehow freed. The purge began with the military, and now they have reached the “untouchable” Chan Song Thaek. In this regard, Kim Jong Un is not original and only repeated the path of his father Kim Jong Il and grandfather Kim Il Sung. Those who received power, also quickly, decisively and firmly freed themselves from the old dignitaries, making a bet on the formation of their personality cult and authoritarian leadership. Judging by all the facts, this is what the current North Korean leader is doing now.

As for possible changes in other areas - ideology, Pyongyang’s foreign and domestic policy, relations with South Korea, the military sphere, structural reforms of the economy - experts disagree. Assumptions and forecasts - the most different. From rising tensions and screwing up nuts, to softening policies and sweeping economic reforms in North Korea. Thus, the repressed Chan was considered a representative of the moderate wing of the North Korean elite, set up to further develop relations with the South. He was called a technocrat in favor of reform. Now Pyongyang can continue the policy of heightening tension, strengthening the image of the “external enemy” in the person of South Korea and the United States in order to rally society. North Korea and so in recent times makes harsh statements, and Seoul and Washington are holding large-scale military exercises, provoking the North to respond.

Representatives of the military and intelligence agencies of South Korea have already expressed fears that the elimination of Chan was caused by a defeat in the fight against the “military party” and could lead to an increase in border tensions. Pyongyang can activate the atomic program and go on forcing tension. In addition, the North Korean trade and economic zone Hwangymphen on the border with the PRC may suffer. Chan was her curator.

However, no less and those who believe that the removal of the "gray cardinal" does not particularly affect the foreign policy of the North. There is a significant likelihood that, having finished the old elite, Kim Jong-un will more actively carry out economic reforms. This includes the appearance of new trade and economic zones. Pyongyang plans to create them in each province, which can attract foreign capital and give impetus to the development of the economy of North Korea.