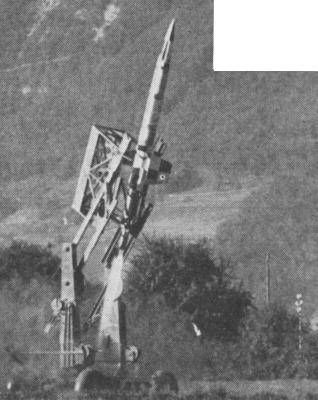 In the forties of the last century, the Swiss company Oerlikon became the leading global manufacturer of anti-aircraft artillery systems. In the mid-forties, shortly after the appearance of the first foreign projects of anti-aircraft guided missiles, similar works were launched at Oerlikon. Not wanting to lose leadership in the field of weapons for air defense, the Swiss company began developing the RSA project. The project was carried out jointly with the company Contraves. Later, these companies merged, but at that time they were independent and independent organizations. Currently, the former company Oerlikon Contraves AG is called Rheinmetall Air Defense.


The development of a promising anti-aircraft missile began in the 1947 year. As part of the RSA project, it was intended to use the latest technologies at that time, which, in theory, made it possible to provide sufficient combat characteristics. Nevertheless, the electronics of that time was not perfect enough, which made it necessary to carry out serious modifications of both the rocket and the ground part of the anti-aircraft complex several times during the project. It should be noted that the main features of the project, such as the guidance system or the overall layout of the rocket, remained unchanged throughout the project.

In the early fifties, the RSA program reached the stage of building and testing missiles. By this time, the promising rocket was called the RSC-50. A little later, after the next processing, the rocket received a new designation - RSC-51. It was under this name that an anti-aircraft missile system was offered for export.

In the design of the rocket RSC-51 used some new ideas and solutions, but its overall appearance was typical for this class of technology, created in the forties. Inside the cigar-shaped metal case with a length of 5 meters and a maximum diameter of 40 cm, all the necessary units were located. In the middle part of the hull trapezoidal X-shaped wings with rudders were attached. An interesting feature of the rocket design was the method of assembling parts. Thus, it was proposed to manufacture the case from metal pressed blank with glue. On a similar technology were going wings.

Inside the body of the rocket, a high-explosive fragmentation warhead weighing 20 kg with a radar fuse, control equipment, as well as a liquid-propellant rocket engine with fuel and oxidizer tanks were placed. This type of engine was chosen due to the absence of solid-fuel engines with sufficient performance. Liquid engines of the time were not very comfortable and reliable in operation, but the characteristics and the lack of suitable solid fuel assemblies affected the final choice. The applied engine could develop thrust up to 1000 kg for 30 seconds. With a launch weight of a rocket around 300 kg, this provided it with fairly high performance. The estimated speed of the rocket 1,8 times the speed of sound. Fuel and speed allowed to hit subsonic targets at a distance of 20 km from the launcher. The estimated maximum height of the destruction of the target was close to 20 kilometers.

Radio systems of the late forties could not be called perfect. Because of this, the Swiss designers had to conduct a comparative analysis of several guidance techniques and use the one that could provide high accuracy with acceptable hardware complexity. According to the results of the comparison in the anti-aircraft complex RSC-51 applied guidance on the radio beam. The complex included a separate radar guidance station, whose duties included the illumination of the target with a radio beam. After launch, the rocket independently had to stay inside this beam, adjusting its trajectory when exiting it. According to some data, receiving antennas of the guidance system were placed at the ends of the rocket wings. The radio beam guidance system made it possible to simplify the rocket’s onboard systems.

The applied guidance system was easy to manufacture and operate (compared to other systems), and was also protected from interference. However, the simplification of the guidance systems, including its ground component, has affected the accuracy. The radar guidance could not change the width of the beam, because of which at a long distance the station rocket, remaining inside the beam, could strongly deviate from the target. In addition, there were quite large restrictions on the minimum flight altitude of the target: the radio beam reflected from the ground interfered with the work of the rocket electronics. The solution to these problems is not considered a priority. However, in the course of the development of the RSC-51 project, some refinements were made to improve the targeting accuracy and flexibility of application.

The ground part of the anti-aircraft missile system RSC-51 could be made both in self-propelled and towed version. The complex included two-beam launchers, as well as radar stations search and guidance on their own chassis. Each anti-aircraft division, armed with an air defense system RSC-51, was to consist of three batteries. The battery was supposed to include two launchers and radar guidance. To search for targets, the division was asked to complete with a common radar station capable of finding targets at a distance of up to 120 kilometers. Thus, the detection radar had to monitor the situation and, if necessary, transmit information about the targets to the batteries. If necessary, the radar guidance operators could use optical means of detecting targets, but this reduced the capabilities of the complex as a whole.

The proposed method of completing divisions provided sufficiently high combat performance. In just one minute, the RSC-51 SAM system could launch targets for up to 12 rockets, while simultaneously attacking up to three enemy aircraft. Thanks to self-propelled or towed chassis, all the facilities of the complex could be quickly transferred to the right place. 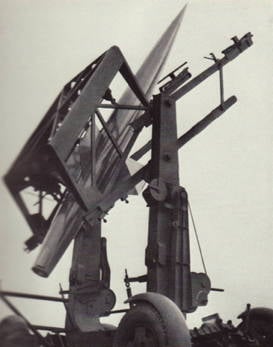 Tests of anti-aircraft missiles created under the RSA program began in 1950. During the tests, a promising anti-aircraft missile system showed fairly high performance. Some sources mention that the RSC-51 missiles were able to hit 50-60% training targets. Thus, the air defense system RSC-51 was one of the first systems in its class to be tested and recommended for use.

The first customer of anti-aircraft complexes RSC-51 was Switzerland, which bought several divisions. Oerlikon and Contraves, being commercial organizations, almost immediately offered a new missile system to third countries. Sweden, Italy and Japan have shown their interest in the promising system. However, none of these countries adopted the RSC-51 complex, since purchases were made solely for the purpose of studying new weapons. The most successful Swiss anti-aircraft systems have achieved in Japan, where for some time were in trial operation.

In 1952, several launchers and radar stations, as well as 25 missiles, were sent to the United States. Despite the presence of several similar projects of its own design, the United States became interested in Swiss technology. The Pentagon seriously considered the possibility of not only purchasing RSC-51 complexes, but also organizing licensed production at American enterprises. The leadership of the US military attracted not only the characteristics of the rocket, but also the mobility of the complex. The option of using it to cover troops or objects at a short distance from the front was considered.

In the US, the purchased SAMs received the designation MX-1868. During the tests, all the purchased missiles were spent, after which all work in this direction ceased. The Swiss anti-aircraft system had no major advantages over existing or prospective American ones, and the mere possibility of a quick transfer to the right place was considered insufficient to justify further purchases.

In the fifties of the last century, rocket technology and radio-electronic technologies were constantly advancing, which is why the Swiss air defense system RSC-51 quickly became outdated. Trying to keep its characteristics at an acceptable level, the employees of Oerlikon and Contraves have made several deep upgrades using new components and systems. However, the use of radio beam guidance and a liquid-propellant rocket engine did not allow the new Swiss anti-aircraft complexes to compete with modern foreign developments.

In the late fifties, the British company Vickers Armstrong turned to the firms Oerlikon and Contraves with a proposal to finalize the RSC-51 complex for use as a ship anti-aircraft system. Such an air defense missile system could become part of the armament of a promising cruiser for the Venezuelan Navy, which was developed by a British company. Swiss designers responded to the proposal. In the ship variant, it was proposed to use two double-beam launchers on stabilized platforms and two stores with 24 missiles each. However, all the advantages of the modified rocket complex were leveled by the applied power plant. The idea of ​​operating a liquid-propellant anti-aircraft missile on the ship was doubtful, which is why work in this direction was curtailed.

At about the same time as the ship version, another project for the deep modernization of the RSC-51 air defense system called RSD-58 was being developed. The new complex differed from previous developments by a greater range of target destruction (up to 30 kilometers) and a greater rocket speed (up to 800 m / s). At the same time, the new rocket still used a liquid engine and a laser beam guidance system. In the late fifties and early sixties, several countries experienced the RSD-58 anti-aircraft complex, but it entered service only in Japan.

Anti-aircraft missile system Oerlikon / Contraves RSC-51 was one of the first representatives of its class, has been tested and launched into mass production. In addition, it was this anti-aircraft system that was first offered for export. However, despite such "achievements", the Swiss defense industry failed to create a commercially and technically successful air defense system. Most of the collected missiles were used during various tests and only a few instances of the complex could take part in the exercises. Nevertheless, the RSA program allowed us to work out a number of important technologies and to clarify the prospects of a particular technical solution.