How in Russia electricity was cheaper, or a thousand and one reforms by Anatoly Chubais

December 11 2013
140
One of the large-scale reforms of Russia of the so-called “zero” model is the reform of RAO “UES of Russia” - a real energy giant on the country's market. Since 1992, when this state-owned company was formed, it included production facilities, systems for the transportation and transformation of electrical energy. RAO UES was the main energy monopolist, leading all leading companies in the world in terms of the level of electric power serviced. 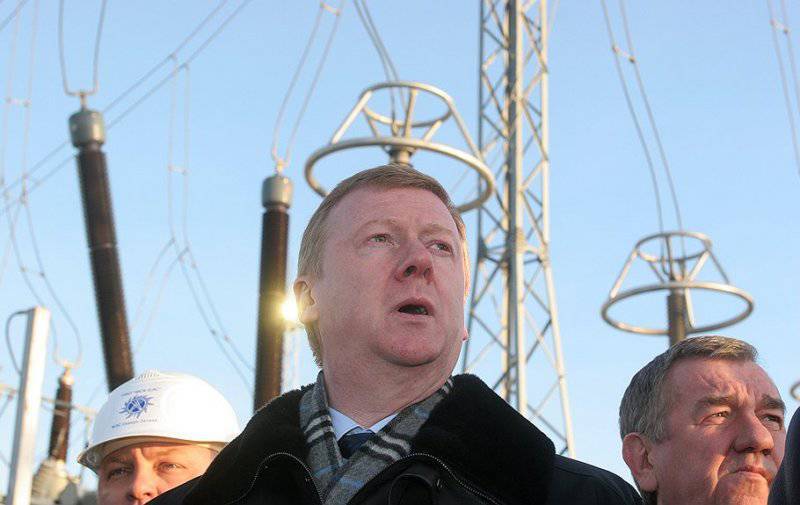 It is noteworthy that one of the initiators of the ambitious reform of the energy holding was its then leader, Anatoly Chubais. The main message of the reform, which, as they say, was launched into the people, is that supposedly after the separation of the state supermonopolist, the price of electricity for end users-consumers (including directly Russian citizens (well, let's call us "consumers" for simplicity)) necessarily decrease. They say there is nothing to think about, because there was one service provider in the market for providing Russians and Russian producers of electric energy, and after the reform there will be a lot of such providers. This multiplicity should have (at least, Anatoly Chubais and a number of members of the then government spoke about this) to ensure healthy competition in the industry with a further reduction in prices. Moreover, it was stated that, in principle, any consumer will be able to choose a particular supplier for himself, and this will also be one of the pushes of everything for the same price reduction.

A large-scale reform work was launched in 2005, as a result of which private companies were able to enter the energy market in order to acquire certain shares of the generating and distribution sector of RAO UES. Anatoliy Borisovich did not need to go for advice on the conduct of huge-scale privatization campaigns for obvious reasons. He did not go anywhere. Privatization has gone so fast that by 2007, 48% of Russian power plants have turned from state-owned to private ones. The 23 sales division of the former monopolist changed their status.

The results of the privatization of the energy holding, as they say, surpassed all expectations ... In 2008, instead of one large company, Russia formed 23 smaller ones, while the total proceeds from the sale of shares amounted to 25 billion dollars with forecasts of $ 15 billion. More than 30% of the assets of the company transferred in the hands of representatives of foreign business.

At first glance, solid budget revenues, the presence of competing private companies should be the main positive of the reform carried out in the country's energy system. However, in fact, it turned out that multiple firms that became “heirs” of RAO “UES of Russia” are not only in no hurry to start competing with each other for a subscriber-consumer, but also raise electricity prices for the final recipient of electricity in a very suspicious way. And who said that all the proceeds from the privatization of RAO went to the budget? ..

This state of affairs is a reason to reflect on how independent the newly-formed energy companies are. Independence eventually took shape only on paper. The buyers of large shares of RAO UES (including such companies as Gazprom, Mechel) did not intend to organize competition within themselves, and therefore the companies that emerged eventually formed a sort of regional groups, each of which resembled a monopoly — a monopoly, say so, local spill. That is, before the reform, there was one monopolist, whose work could at least be controlled (naturally, if desired) centrally, and after the reform, when there were a lot of real local monopolies, there was no talk of centralized control. No state regulatory authority for such multi-vector control has grown ...

During the post-reform stage, more than 3,5 thousands of so-called TCO - territorial grid organizations were singled out from individual private companies. These very TSOs (according to the legend of the reform) had to make their own (of course, substantial) contribution to the final reduction in prices for final consumers, thanks again to competition. But, as might be expected, there was actually no competition (and continues to be absent) as such. Prices differ only regionally. In other words, if you are a resident of the subject of the Federation “A”, but the prices for electricity are absolutely not suitable for you here, then no change in the territorial grid organization will help you. In fact, to achieve a change in the supplier of relevant services within the region is simply unrealistic. Not satisfied with the price - as an option - move in the region "B" - there may be cheaper ... Such is the healthy competition ...

Regularly rising tariffs for electricity made it clear to everyone that the main essence of the reform was not at all to ultimately reduce the price of energy through the crushing of a supermonopolist, but rather that the big players got remarkable profits in the privatization process. The profits of these same players were already at the first stage of a grand sale of energy assets. Thus, the total value of shares of companies that were born on the ruins of RAO UES exceeded the value of RAO UES itself by almost a third. That is, the costs of private owners in the purchase of state property, if I may say so, paid off. Moreover, each private owner was able to "play" with the price of electricity produced.

Although it should be noted that in general there is a strange situation with the prices. Initially, it was about the "vacation" prices, that is, the price of electricity should have been formed exclusively free market way. However, the state retained control over the pricing of electrical energy produced at nuclear power plants (about 18%) and hydroelectric power stations (about 22%). That is, a certain halfway system was formed, which was clearly far from optimal.
After the reform, Anatoly Chubais, in particular, noted that he was satisfied with the reform and did not believe that a return to a large state monopoly in the electricity sector is necessary and possible.

In this regard, it is impossible not to mention the proposal that today comes from the State Duma deputies. The legislators decided to arrange a kind of revision of the results of the separation of RAO UES, but only in a very specific form. Ivan Grachev, the representative of the Fair Russia faction, who is the chairman of the energy committee (co-author of mortgage laws, non-state pension funds and the author of amendments to the law on taxis), said that parliamentarians are working on a document according to which the said territorial network organizations will be abolished, and large companies will appear instead. These companies, in turn, will be controlled by Rosseti (the main shareholder is the state with almost 56% of shares).

According to the deputy, such a move can correct the situation in the Russian electric power industry.

On the one hand, if the reform has frankly failed, then its revision seems to be correct. But where are the guarantees that after the revision there will be no desire for re-privatization so that the next “fat cats” will get their bonuses. After all, in the end, every whim will have to pay an ordinary citizen.

Where are the guarantees that the new reform will not fall on the shoulders of this very citizen in the form of another increase in tariffs. Why not ask in this case from those who started the reform at the time and put it into practice, it turns out that the Russian electric power industry did not win the substantial growth of capitalization of the emerging companies, the infrastructure in most of the regions remained unchanged (non-modernized), but tariffs are “upgraded” upwards regularly. Why officials are willing to undertake the reform, and how to respond, then immediately in the bushes? Question…
Is it time to introduce direct responsibility for the failed reforms? After all, if the reformist fervor continues to be limited to “tales of a wonderful life after reform,” then the number of those who want to privatize first, then cancel the results of privatization, in order to re-privatize again (by their own rules) will only grow.

PS Today, as many readers are well aware, Anatoly Chubais heads the state corporation Rosnano. And if responsibility for the failed reforms will not be introduced in the near future (and, most likely, it will not be), then there is a possibility that Rosnano can follow the path of RAO UES. There is a vast space for maneuver of the main reformer of all Russia ...

Ctrl Enter
Noticed oshЫbku Highlight text and press. Ctrl + Enter
We are
Donbass: a thousand days of war against neo-fascismBankrupt man. The loudest projects of Anatoly Chubais
140 comments
Information
Dear reader, to leave comments on the publication, you must to register.