WTO and Russian agriculture: who wins?

December 11 2013
117
Starting from the current year, a regular program was launched aimed at the development of the agricultural sector in Russia. These programs with enviable regularity come out of the governmental depths, then smoothly flowing from one to another, then being born completely spontaneously, but the results of the action of these programs, to put it mildly, are far from ideal.


Despite the enormous agricultural resources that Russia possesses, the effect of using these resources (if compared to many other countries of the world) remains minimal. There are departments, subdivisions, commissions, subcommissions, special groups, committees, the ministry, and the main goal - ensuring the food security of the country - remains unattainable.

So, something about the new program, which is designed for up to 2020 year. The name of this program is as follows:
"State Program (GP) of agricultural development
and regulating the markets for agricultural products, raw materials and food. ”

What are the goals of the program?
1. Ensuring the country's food independence in the parameters set by the Doctrine of Food Security of the Russian Federation;

2. Increasing the competitiveness of Russian agricultural products in the domestic and foreign markets based on the innovative development of the agro-industrial complex, optimizing its institutional structure, creating a favorable environment for the development of entrepreneurship, and increasing the investment attractiveness of the industry;

4. Reproduction and increase of efficiency of use in agriculture of land and other natural resources, ecologization of production;

5. Sustainable development of rural areas (this item is allocated to a separate federal targeted program, which they are going to implement in two stages: from 2013 to 2017 and then to 2020 of the year).

In the passport of the considered state program, the expected results of its implementation are separately highlighted. As such, an increase in the total share of Russian agricultural goods by 2020 to the following indicators is considered:
Security grain - 99,8%;
sugar - 91,2%;
vegetable oil - 82,8%;
meat and meat products - 88,9%;
milk and dairy products - 85,3%;
potatoes - 99,7%. 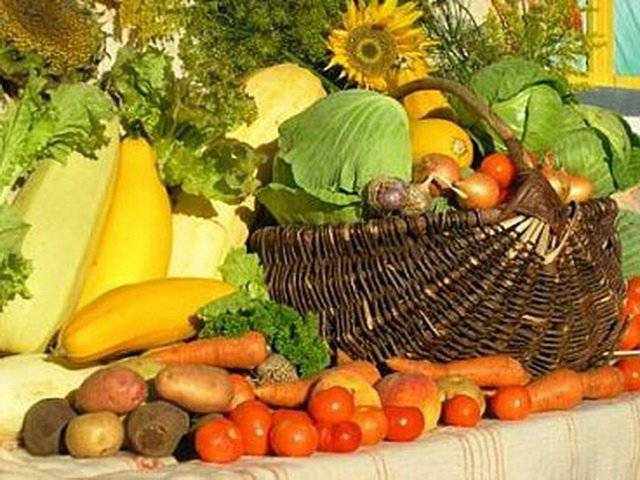 The development of this state program has been carried out over the past few years, so the 2009 of the year is taken as the main reference point of reference in some points. So, for example, according to the letter of the GP, by 2020, labor productivity in the agricultural sector of the Russian Federation should increase by 70%, and the wage level to the same 2020 should be no less than 95% of the average for a particular region. The government allocates more than 2,1 trillion to these goals and to solve such ambitious tasks. rubles, of which, you need to pay special attention to this, almost 190 billions have already been spent. The creation of a regulatory framework and the fitting of Russian technical regulations to WTO technical regulations is indicated as the main direction of spending. That is, the first “portion” of budget financing went to documentary alignment of the field of activity of Russian agricultural producers within the World Trade Organization.

So, the SE of the development of agriculture and regulation of the markets of agricultural products, raw materials and food one of its goals is to increase the level of food independence (security) of the country. At the same time, it is necessary to pay attention to what the food “independence” of our country is today. According to reports from several analytical centers, the level of imports of meat and meat products in Russia today is 25% (every fourth kilogram of meat on the Russian market is imported), milk and dairy products (together with dried milk) - about 30%, the level of imports of fruits and vegetables comes to 59-60%, vegetable oil - 24%.

It would seem that if you press a little, you can achieve the level of domestic production defined in the State Program without any problems and turn Russia into a world leader in the production of high-quality agricultural products capable of being one of the locomotives of the economy. Despite the ambition of the goals and objectives of the GP, they do not look at all unattainable and impracticable. Or better so - would not look if it were not for one thing. This “but” refers to the need to invest in agriculture, not even with the aim of developing it, but with the aim of fitting its standards to WTO standards. That is, at the household level, something like this: in order for Russian turnips to be brought to the international market at preferential duties, you need to grow this turnip this way and that. We will not “so and so”, so the Dutch, the Japanese or the Swedes will not deny the Russian hypothetical turnip to their markets to “let go”, but our counters will cast aside their “turnip” in any case ...

It turns out that the very promise of the agricultural program, which will be implemented before 2020, is in conflict with WTO rules. Why? Yes, because the bosses of the World Trade Organization give us (Russia) 5-7 years, so that we (Russia) think well about how to build their agricultural market. And this is only for the so-called "sensitive" groups of goods. For a number of other products - the term and not more than 2 years. After this period, the global manufacturer, we will build something or do not have time to do this, trample to Russia, lured by the demand for a reduction in duties for foreign goods. Considering that the Russian Federation was admitted to the WTO in August last year, almost a year and a half from the mentioned period has already passed.

Referring to the document signed by representatives of the Russian authorities 22 August 2012, when Russia joins the WTO, it should be noted that in the near future, the Russian Federation will have to reduce duties on all agricultural and related products. So, for example, the duties on milk and dairy products will decrease on average by 5%, fish raw materials (if you refer fish to agricultural) by 5%. Reduced duties on fruits and vegetables - 1,5 times (for some types of vegetables - a decrease of almost 2 times). Mineral fertilizers and animal feed imported from abroad are also expecting a significant reduction in duties. 31 December 2019 of the year should fall last bastion - quotas on the import of foreign pork.

In this regard, it is possible to note the presence of a certain incident: on the one hand, the government program requires Russian agricultural producers to increase production for all types of agricultural products, and on the other hand, the Russian government undertakes to gradually open up the domestic market for imports. This situation may lead to the development of the following scenario: Russian farmers will have to reduce the price of their products, prepared for sale on the domestic market. Otherwise, a more affordable imported agricultural product, today more resembling the achievement of the chemical industry, will continue to displace Russian products: from vegetables and fruits to meat and milk. Already, it is almost impossible to see Russian apples, cabbage or potatoes on the shelves of large retail chains (especially in winter). The shelves are replete with perfectly clean, unnaturally shiny, not “bled flies” (flies and they don’t sit on it ...) Polish, Dutch, Spanish, Turkish, Israeli and other agricultural products. And this is before a large-scale reduction in import duties. We can assume that it will be after Russia fulfills all obligations to the WTO ...

But will peasant farms survive in the event that they also require cheaper finished products? And now, many farmers are forced to sell their agricultural products to dealers at bargain prices. What will happen next? Nobody wants to work at a loss, but if you are guided by the requirements of the WTO and the tasks voiced in the State Program, then you will either have to work at a loss, or you just have to pound your farms with boards, give arable land for the cottage building, and put cows under the knife.

But it was already in our country. Suffice it to recall the situation of 1992-1993, when even major government officials declared that it is more profitable for Russia to put an extra pair of pipe branches to transfer hydrocarbons to Europe than to grow potatoes or carrots in their fields. Then they did it ... Today, except that in the field of grain gathering significant progress is observed. Russia has again become one of the exporters of grain, only it should be noted that the grain harvest will not reach the level of the 1992 of the year. The level of meat production today in 1,6 times lower than the 1992 of the year. Such a situation is an echo of 90-x, when Russia's strategic resource — its arable land (and this is 10% of all arable land of the planet) —were completely neglected when the word “collective farm” became synonymous with devastation and hopelessness, when the tendency of complete destruction of domestic agricultural sector with a simultaneous triumphant march of “Bush legs” around the country. Having work in the countryside became almost nonsense; people were forced to leave their homes, abandon their farms and look for a better life in large cities. And today we want to repeat this one more time? But isn't this extra injection fatal? ..

If we want to achieve the food independence program mentioned in the program, then the WTO bosses need this, as they say, popularly explained. What a sin to conceal, the tasks of these very bosses certainly do not include the development of the Russian agricultural sector. So, it’s time to work with the bosses themselves, and with the WTO as a whole ... In Syria, after all, we were able to work on the development of the CU - as well, but here - is it really that difficult ...

Well, this is if such work is in general in the interests of state officials, as well as the development, in fact, of agriculture ...

Ctrl Enter
Noticed oshЫbku Highlight text and press. Ctrl + Enter
We are
Agriculture and food security. Problems and ProspectsWTO is marking time. Russia will push?
117 comments
Information
Dear reader, to leave comments on the publication, you must to register.