In Kiev, special forces eliminated barricades and tents of protesters 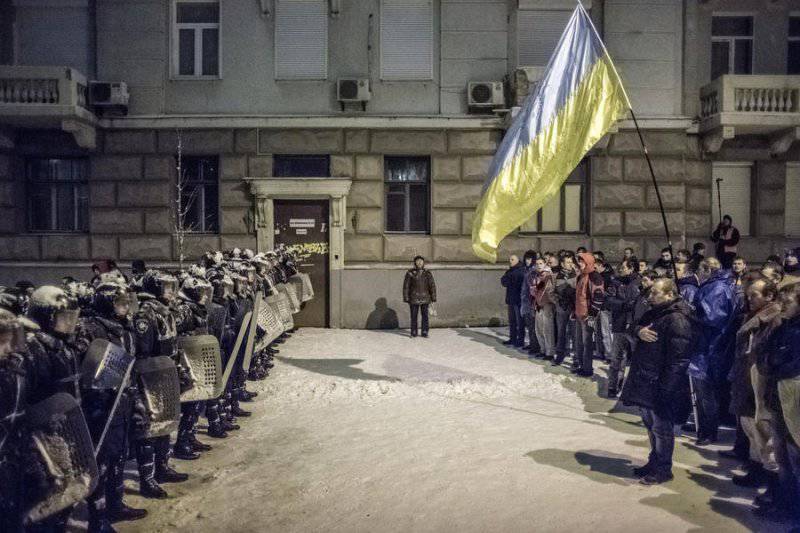 That night, the security forces demolished the tents and cleaned the barricades erected by supporters of European integration in different places of the Ukrainian capital. Opposition leaders say there are injured on both sides.

The most serious confrontation was noted during the liquidation of special forces "Berkut" by the demonstrators' checkpoint at the corner of Lutheran and Bankova streets, not far from the presidential administration building. There was also a tent camp located there. Siloviki using shields pushed people. According to Interfax, provocateurs armed with sticks penetrated into the ranks of the protesters, who sprayed tear gas in the direction of the guards. Also unknown tried to set fire to the barricades.

According to the leader of the nationalist association "Freedom" Oleg Tyagnibok, there are victims among the protesters and among the siloviki. The politician did not cite exact data, but noted that “there are at least 10 people like this”. Eyewitnesses noticed ambulance cars approaching the cordon.

In the Lutheran church near the site of the clashes, according to eyewitness accounts, a first-aid post was organized.

Previously, barricades were dismantled at the corner of Shelkovichi and Bogomolets streets, and roadblocks on the Grushevsky and Institutskaya streets were cleaned. In this case, another incident occurred next to the building of the National Bank. According to Interfax, the demonstrators marched down Institutskaya Street, but without any difficulties passing through the cordon of security officials standing across the street, they turned around and began to press on the officers of the Interior Ministry troops stationed in the cordon. Later, the opposition explained their actions by saying that they wanted to block the possible advance of the special forces "Berkut" in the direction of the Independence Square.

Reportedly, and about the confrontation on the corner of Grushevsky street and the fortress alley. Near the House of Officers, special forces surrounded the demonstrators for some time, so that they did not prevent the employees of the State Emergency Service from dismantling the tents. At the same time, the publication Ukrainian Pravda, citing People's Deputy Andriy Shevchenko, reported clashes. This data is not confirmed.

Currently, protesters who had previously left the Kiev mayor's office returned to the building. At night the light went out there. Later the power supply was restored. Most likely, the reason for the shutdown was interference with the electrical switchboard. Someone simply turned off the switch, the agency reports.

Rumors of an upcoming assault on the city hall spread among the opposition last night. At the same time, due to reports of mining, three stations of the Kiev metro were closed: “Maidan Nezalezhnosti”, “Khreshchatyk” and “Teatralnaya”

Recall that actions of supporters of European integration began in the cities of Ukraine after the decision of the country's authorities to suspend the process of preparing for the conclusion of an association agreement between Ukraine and the EU. The reason for the suspension of European integration was voiced by the Prime Minister of Ukraine Mykola Azarov.
According to him, the country's leadership received a letter from the International Monetary Fund, which contained unacceptable conditions for granting loans by this financial organization: an increase in tariffs for housing and communal services, a freeze in wages and pensions, the abolition of subsidies for agriculture. "We could not go for it," - said Azarov.