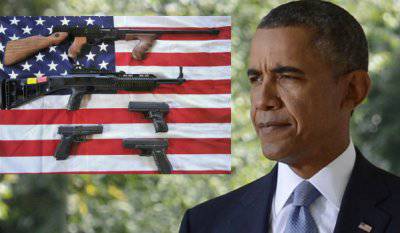 A year ago, "Black Friday" in the US (November 23 2012) set a record for sales weapons. At the same time, there was a decrease in the total amount of sales in physical stores (outside the Internet marketplaces) in comparison with 2011 Black Friday. This means that the demand for firearms in the United States has increased while reducing the demand for juicers and televisions. American analysts noted that a huge number of consumer applications for pistols and rifles was associated not only with a decrease in prices during the sales season, but also with the fact that Obama had previously advocated tough restrictions on the arms trade. It is worthwhile for the president to say something about the possible imposition of restrictions, as the Americans line up at gun shops. It seems that Barack Hussein is working on a gun lobby.


According to the National Organization for Sports Shooting (NSSF), arms sales in the United States set a record, showing an increase of 20%. The increase in sales was so great that many retailers reported an extension of the waiting time for processing requests to the FBI (checking the customer information to identify the criminal past).

The arms dealers say that people buy pistols and other weapons because they are afraid of legislative changes. Obama may try to impose restrictions on trade, and even a ban. People rush to buy weapons, while nothing has changed. Dealers say buyers are afraid that the legislators during the second term of the Obama presidency may impose stricter laws regarding the acquisition and carrying of weapons. They even talk about a possible attempt to renew the ban on military weapons.

American journalists also explain the sharp jumps in the demand for weapons by some election promises from Obama, who during the presidential debate said about a possible ban on sales of military weapons. Also, Obama has publicly stated that the policy of empowering people to keep and bear arms will be updated. In fact, B.H. Obama, for all his attempts to push through restrictive measures in the field of trade in rifles and pistols through Congress, is the real instigator of the demand for firearms.

The demand for guns in the United States jumps and in every case of an “epidemic” of murders. In December 2012, the firing in the most democratic country in the world did not stop at all.

In California, police arrested a man in the parking lot of a shopping center in Newport Beach who opened fire and fired fifty bullets. It is surprising that this madman did not hit anyone.

In Alabama, the police put Mr. with a Kalashnikov assault rifle who killed three people.

Another "fighter" from the same state made a shooting in the hospital, wounding a policeman and two medical staff. A bullet from a police pistol calmed him down.

On the same day in Indiana, police arrested one type who threatened to open fire in an elementary school. This man was going to "kill as many people as he can." Fortunately, they managed to stop him. A search of his house found 47 units of firearms and ammunition for a total value of more than 100 thousand dollars.

2012's worst tragedy of the year occurred at the Sandy Hook School in Newtown, Connecticut. 26 people died there (27 became the killer), among them 20 children. The killer, twenty-year-old Adam Lanza, first shot his mother home, and then drove two guns, a semi-automatic rifle and a shotgun in her car, and drove to the city’s primary school. Arriving there, he opened fire on adults and children. Then he shot himself.

After the tragedy, the President of the United States at the mourning interfaith prayer gave the floor to take measures at the national level to ensure the safety of children. He stressed that in commemoration of the victims of Adam Lanza, who shot twelve girls and eight boys, as well as six adults, including the headmaster, the nation should take legislative measures.

The following is curious. Having said this, Obama immediately declared: “Not one, not even a number of bills will completely solve the problems of violence in society, but the state should not accept the fact that mass slaughterhouses are becoming commonplace in American reality.”

It turns out that the president did not say anything at all about his intention to specifically address the problem caused by the free sale of firearms in the United States. On the contrary, as we see, he hinted to the audience that everything will remain the same as it was before: “Not one, not even a number of bills will completely solve the problems of violence in society ...”

After that, a petition addressed to US authorities appeared on the e-government website:

“Addressing the issue of arms control through the implementation of the relevant law through Congress.

The purpose of this petition is to force the administration to draft a law restricting access to weapons. It is extremely important to start a national dialogue, because the laws are the only means by which we can reduce the number of people who die as a result of the use of deadly weapons ... ”

The petition contains an indication that today, behind free access to arms, there are influential lobbyists who benefit from the Second Amendment to the Constitution.

This is common knowledge.

The main arms lobby in the US is the National Rifle Association. This organization is known to have donated more than $ 5 million in elections to candidates for the House of Representatives and the Senate - and thanks to their efforts, the ban on selling assault weapons, which has been in force for a decade, was lifted in 2004.

The ban on the possession of assault weapons for civilians operated in the US from 1994 to 2004. After 2004, attempts to reintroduce the ban failed: the bill did not gain enough votes. One of Obama's well-known attempts relates to 2012: she was a reaction to the mass murder of people in the cinema of Aurora City by the mentally unbalanced Joker, who did not like the main character in the Batman movie.

After the massacre at Sandy Hook School, both Obama and the senators again spoke about imposing restrictions on the arms trade.

For example, Democratic Senator Dian Feinstein announced her intention to submit a bill banning the sale of weapons stores with a capacity of more than ten cartridges. However, later her draft is not something that did not pass the vote, and was not even put to a vote on preliminary results.

B.H. Obama, with 2008, promises to restrict the free sale of weapons, but the weapons lobby, through his henchmen in Congress, stops all his attempts. It is also interesting that after each statement on the restriction in the United States there is an increase in the demand for firearms.

The example of the Colorado shooter is indicative. The actions of the mentally unbalanced James Holmes, who imagines himself a Joker, an enemy of Batman, and putting twelve people in the Aurora’s cinema and about sixty injured, caused not only Barack Obama's regular performance, but also a jump in sales of pistols and rifles in gun stores.

People in the United States were drawn not only to the cinemas (look at Batman), but also to gun shops. Sales of firearms in the state of Colorado in just three days showed an increase of 43% compared to the same period a week before the shooting in the cinema. In Seattle, Washington, within a few days, the number of applications for licenses for concealed carrying of weapons has doubled. In Florida, in just two weekends, sales increased by 14% over the same period a week earlier. In Oregon, media say, such sales showed an increase in 11%, in California - by 10%. As you can see, this has nothing to do with sales like “Black Friday”, at which the prices for weapons and other goods are significantly reduced, or the buyer gets two “for the price of one” revolver.

After the tragedy at Sandy Hook School and the corresponding Obama speech, the demand for weapons also increased. The media wrote about the increase in demand over the course of several days almost by 50 percent. While Obama turned to people, wiping away tears, the gun shops lined up for pistols and rifles.

Nearly nine-tenths of Americans, according to official information from the FBI, today own a firearm. Of course, only legal possession is taken into account - according to verified applications.

It turns out that the American president, who has often advocated tough restrictions on the arms trade since 2008, actually plays into the hands of lobbyists. Is this a conscious policy or random “promotions”? In accidents, occurring one after another and looking more like a pattern, it is hard to believe for some reason. Moreover, B.H. Obama has always been extremely flexible in his “anti-weapon” statements: “Not one, not even a number of bills will completely solve the problems of violence in society ...”

By the way, the 2013 year - the year of the failure of Obama’s anti-weapon projects and Democratic senators - turned out to be a period of slight decline in the trade in firearms. According to official data from the FBI, last Black Friday (that is, one day) 144.758 applications were received for the purchase of firearms. Recall, November 23 2012 received 154.873 applications from buyers.

Thus, any tragedy that killed civilians in the United States and any speech by Barack Obama on this issue, accompanied by statements about the need for control and regulation, cause massive demand for pistols and rifles. The reverse is also true: the failure of the Obama administration and the Democratic senators to hold a restrictive bill reassures those who want to gather firearms at home. Summarizing: B.H. Obama is the most suitable president for lobbyists from the National Rifle Association. And in general, the NSA should sponsor the election campaign of any presidential candidate who promises to introduce gun control.

Ctrl Enter
Noticed oshЫbku Highlight text and press. Ctrl + Enter
We are
Results of the week. "I'm not guilty! He came himself! ”Arms Record of American "Black Friday": Pistols and Shotguns against Obama, the UN, and Zombies
21 comment
Information
Dear reader, to leave comments on the publication, you must to register.