The press leaked information about the new American drone RQ-180

December 10 2013
26
The American magazine "Aviation Week & Space Technology" in the latest issue of December 9, 2013 made the title topic an exclusive material that reveals information about a new secret stealth reconnaissance drone of the United States. We are talking about a large drone Northtop Grumman RQ-180, which is created according to one of the "black" programs of the Pentagon. It is reported that the RQ-180 unmanned aerial vehicle is a completely new generation of UAVs, which, unlike the well-known fairly slow-moving drones Predator and Reaper, is designed to operate in “contested” or “inaccessible” airspace. That is, it is able to operate in conditions of active opposition from the enemy, which has a developed air defense system and the air force.


The appearance of the RQ-180 drone can shed light on the true reasons for the refusal of the US military to use the RQ-4B Global Hawk Block 30 drones, which belongs to the previous generation of aircraft data. A magazine publication reports that Northtop Grumman was able to win the Pentagon’s secret contract to develop the RQ-180 based on a tender, in which Lockheed Martin and Boeing also participated. Presumably, the new program is joint for both the CIA and the US Air Force and is conducted under the supervision of the Rapid Capabilities Division of the US Air Force. In a similar way, work was underway to create another secret UAV that was close to its destination, although it had a smaller size, the Lockheed Martin RQ-170 Sentinel ("All Sentinel"). The analysis of the financial statements of the company Northtop Grumman allows to conclude that the contract for the development of RQ-180 was obtained by the company in the 2008 year, when the company indicated an unexplained increase in the order book directly to 2 billion dollars in the Integrated Systems division.

Northrop Grumman's published financial reporting for the current year has information that an unnamed program of an aircraft has entered the pre-production release stage (LRIP). At the same time, available images from space showcase new hangars and airspace shelters with a wingspan of more than 130 feet (about 40 meters) built at Northrop, located in Palmdale, California, as well as at the famous US Air Force Flight Research Center in Nevada - based on Area 51 (Zone 51). Earlier in 2010, Northtop Grumman reported a significant expansion in its California manufacturing facilities.

aviation experts emphasize that the Northrop hangars in Palmdale, as well as on the Zona 51 air force base, can contain a flying machine with a wingspan of more than 40 meters, which makes it larger than the Lockheed Martin RQ-170 Sentinel, which had a wingspan of about 26 meters. Earlier, the United States has repeatedly used the RQ-170 Sentinel UAV, in particular, during the operation to destroy the terrorist Osama Bin Laden in May 2011. 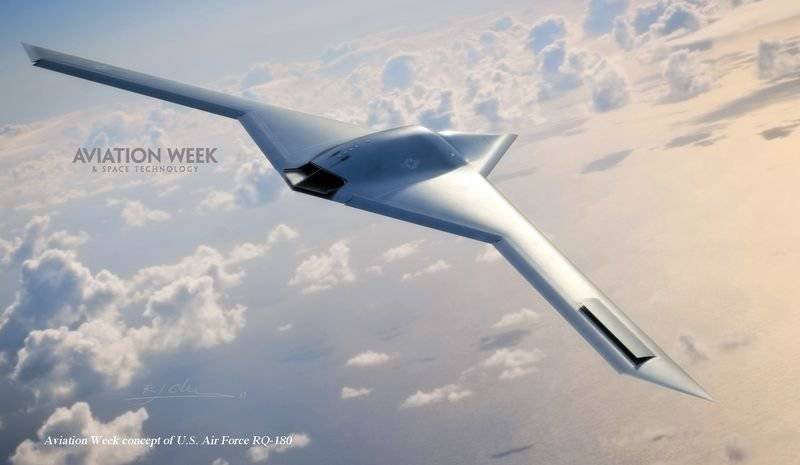 Also, unmanned aerial vehicles RQ-170 were quite actively used in Afghanistan as part of Operation Enduring Freedom. It was confirmed that UAVs also worked on Pakistan and Iran. At the same time, in December 2011, the Iranian army reported about the downed RQ-170, which flew over the territory of the country. Later, the Pentagon acknowledged the loss of its drone in the region, and the downed vehicle was shown on Iranian television. 13 December 2011 reported in the media that the United States filed an official request with Iran to return its drone, but Tehran, of course, did not respond to this request and demanded an apology from the United States.

The main purpose of the new UAV RQ-180 can be the implementation of integrated aerial reconnaissance using a complex of modern equipment, which includes active (with AFAR) and passive intelligence systems. There is also information that the drone can be used to maintain the EW. According to American terminology, this unmanned aerial vehicle is characterized as a system of “penetrating” (penetrating) or “permissive” (permissive - in the sense of penetrating into the “forbidden” airspace) reconnaissance (Intelligence, Surveillance and Reconnaissance - ISR). According to the tasks being solved, the new drone will be able to complement the capabilities of the military RQ-170 Sentinel UAVs and U-2 Dragon Lady reconnaissance aircraft. It is reported that the UAV will be shared by the US Air Force and the CIA.

The publication Aviation Week & Space Technology notes that Northrop Grumman has begun a series of flight tests of the classified RQ-180 reconnaissance UAV. This device is created for the purpose of conducting reconnaissance, observation and reconnaissance in the zone of action of a strong enemy air defense. The adoption of the new model for service is planned for 2015.

This aircraft was created according to a modified “flying wing” scheme, which the manufacturer itself designates as cranked-kite (literally “bent serpent”). This scheme is characterized by the presence of a high center-section with smooth forms and rather long thinning wings. A similar scheme, Northrop Grumman has already applied when designing the deck UAV X-47B UCAS-D. 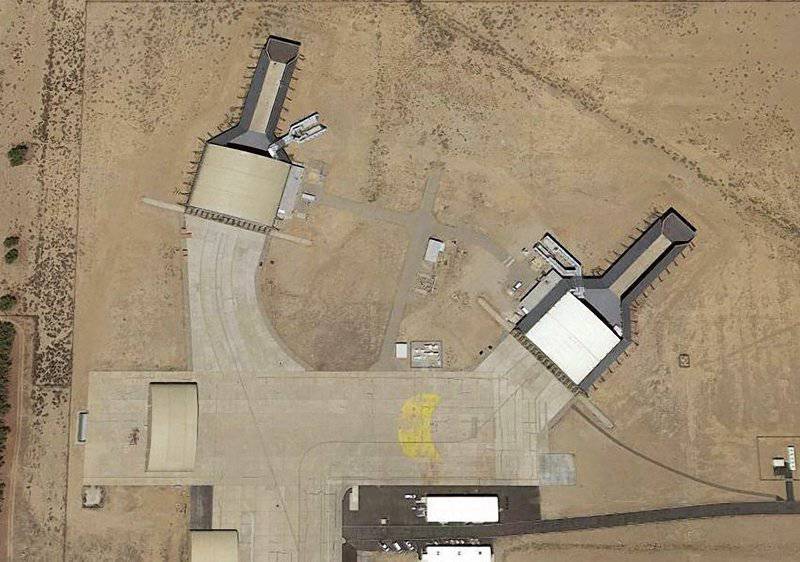 It is reported that in the design of the RQ-180 will be widely used technologies to ensure stealth from all angles of the device. This approach required the implementation of a large complex of works in the field of aerodynamics, since the aerodynamic characteristics and the principles of the geometric reduction of radar visibility are rather poorly combined. An increase in the level of stealth of the apparatus, along with an attempt to preserve the laminar flow, required the creation of new composite materials.

In the development of new composite materials, apparently, the company Scaled Composites, which was acquired by Northrop Grumman in 2007, participated. This company, in particular, specializes in the creation and production of gliders made of composites with “inverted” compounds, which in practice allow you to create durable structures that have a smooth surface. These technologies make it possible to obtain a larger amount of free space inside the fuselage of the aircraft due to the reduction in the number of elements of the power structure.

According to Northrop Grumman, the aerodynamic calculations showed that in the process of designing the wing and center section of the RQ-180, it was possible to achieve aerodynamic efficiency “like a glider”. At the same time, American engineers were able to achieve sustained maintenance of a high degree of laminar flow on the swept wing of the drone. In the process of calculations, more efficient nozzles and air intakes of engines were also designed, which well met the requirements for low-visibility of the apparatus.

It is reported that in terms of stealth, the new drone will significantly exceed all the aircraft that are currently available to the US Air Force, we are primarily talking about the newest fighter F-35 Lightning II and F-22 Raptor. The superiority of the RQ-180 UAV will be ensured by a high level of stealth apparatus from all angles, and not only in frontal projection, as is the case with modern American fighters. 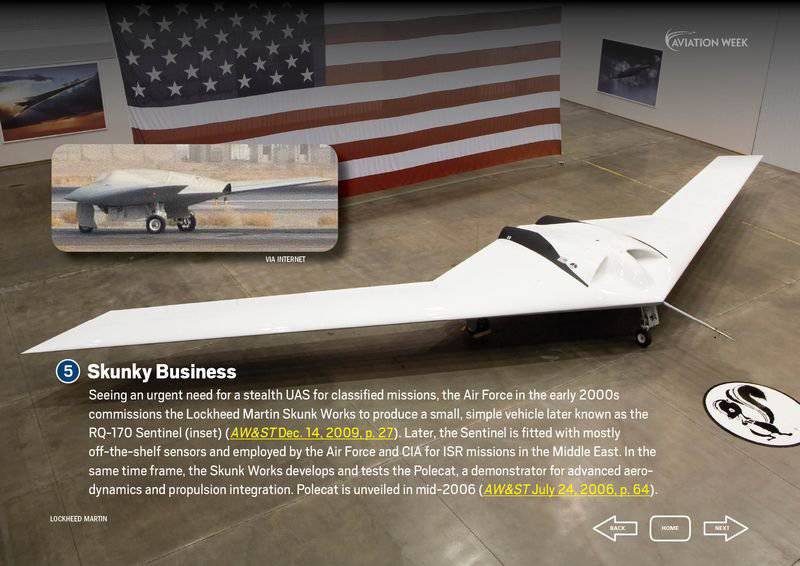 Improved aerodynamics and the use of stealth technology will allow the drone to go unnoticed in the airspace of a potential enemy, while increasing the duration and range of the flight compared to its predecessor, the RQ-170. It is also reported that the design of the UAV RQ-180 provides protection against high and low frequency emitters, thus avoiding the possible interception of control over the drone or disabling it.

According to the assumptions, the new secret reconnaissance drone will receive turbojet engines with an average bypass ratio, similar to the CF34 engines, which already have X-47B UAVs equipped with. At the same time, the engines of the apparatus will be modified in such a way as to provide him with a stable, economical flight, even at a substantial height. They will also have to generate energy, which would be enough for the functioning of all the electronic equipment on board.

In size, the new reconnaissance drone is likely to be comparable to the RQ-4 Global Hawk UAV. With a length of 14,5 meters and a wingspan of 39,9 meters, this unit weighs tons of 14,6. It is assumed that the new drone RQ-180 will be able to operate at a distance of 2200 km from the base and be in the sky for 24 hours. It is not excluded that it will be equipped with equipment for refueling the device in the air.

Apparently, the new drone is a development of the project J-UCAS, which the US Navy and Air Force have been working on since the beginning of the 2000s. The aim of the J-UCAS project was to create a single unmanned platform that would satisfy both the fleet and aircraft. At the very end of 2005, this program was divided into two parts - the secret air force and naval UCAS-D. Perhaps RQ-180 is the brainchild of this secret program. At present, Northrop Grumman and the United States Air Force do not comment on the RQ-180 creation program.