December 10 2013
8
The US government has banned WestCAM Solutions to supply Turkey with laser designators and sensors that were supposed to be installed on modern Turkish drones Karayel. According to Today's Zaman, due to this decision, the delivery of a new reconnaissance UAV to the Turkish armed forces, which were planned for June 2014, may be in jeopardy. The contract to develop a new reconnaissance drone, designated Karayel, was signed by the Turkish Defense Ministry with Vestel in 2011 year. In the future, this company ordered the necessary components from the American company WestCAM Solutions. In accordance with US law, the company requested permission to export military equipment from the government and was refused. At the same time, Washington did not explain the reasons for this decision.


In addition to the Karayel reconnaissance UAV, modern American laser designators and cameras were planned to be used to create the combat version of the Anka drone. Sources of the Today's Zaman publication in the Turkish defense ministry suggested that the United States could refuse to supply Ankara with components because the Turkish military had earlier opted for China’s production systems as part of a tender for the supply of air defense systems. Earlier, Washington also refused to supply Turkey with American drums MQ-1 Predator UAV. It is assumed that Turkey, which is experiencing great disappointment with the decision of the US authorities, can express its protest to the States at the highest level.

Created in Turkey, the new Karayel UAV will be able to fly at altitudes up to 7 thousands of meters above sea level, as well as carry various payloads weighing up to 70 kg. The drone can be in the sky for 20 hours. According to the terms of the agreement, which Vestel has signed with the Turkish Defense Ministry, the military were to receive 6 new reconnaissance UAVs, as well as 3 ground control stations. 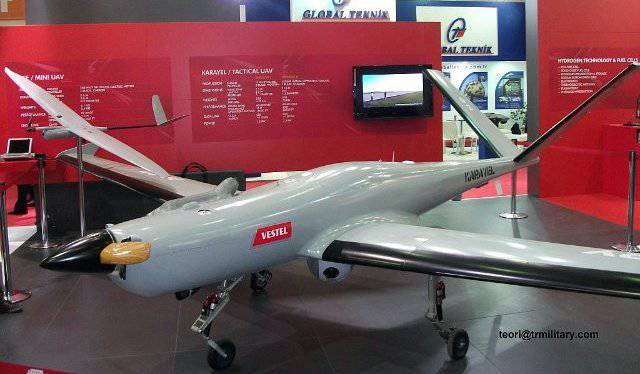 Karayel drone
In the past few years, Turkey has taken the direction of the development and manufacture of military products by its own industry. Therefore, the idea of ​​creating a Karayel drone by the Turkish military company Vestel Savunma Sanayi was as out of place. In the Turkish army, new drones were to replace Israeli-made Heron aircraft. In total, Vestel’s plans were to produce up to 50-60 UAVs of this type.

Today, Turkey is quite active in the field of creating its own unmanned aerial vehicles. In particular, based on the Anka reconnaissance drone designed by the Turkish Aerospace Industries (TAI) company, it was planned to create a drone drone. In total, the Ministry of Defense of Turkey hoped to purchase Anka 10 drones.

Unmanned vehicles of this class are equipped with an 155 horsepower engine. According to the manufacturer, the drone is able to be in the sky for at least 24 hours, conducting reconnaissance from a height of up to 9 thousands of meters. The length of the apparatus 8 meters, wingspan - 17,3 meters. The device is able to reach speeds up to 220 km / h. Currently, these devices are equipped with only electronic-optical and infrared surveillance systems, but in the future, the UAV will receive satellite communication systems, electronic intelligence and a repeater signals. In addition, TAI expects to create an improved version of its apparatus, which is supposed to receive the designation Anka +. This version should be equipped with guidance systems and a variety of outboard weapons. This drone also suffered from the decision of the US authorities to refuse to supply the necessary military components to its ally in the NATO bloc. 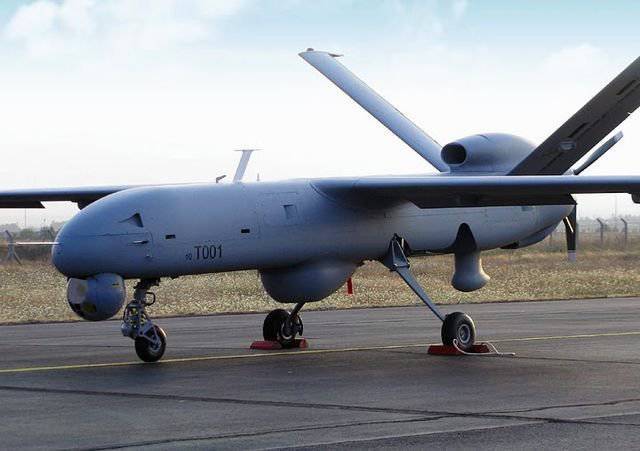 At the same time, Turkish drones are quite in demand, at least in the region. The Egyptian Ministry of Defense reported on its readiness in acquiring them in 2011. Preliminary negotiations on the supply of the Anka UAV ("Phoenix") were held back in September 2011 of the year during the visit of the Turkish Prime Minister to Egypt.

Tensions between Israel and the United States on the one hand, and most Arab countries on the other, in principle, can have a positive impact on sales of military equipment of Turkish production, including UAVs. Currently, the defense enterprises of Turkey produce about 15 various unmanned aerial vehicles of reconnaissance and tactical class. These include Anka, Bayraktar, Karayel and Efe. Some of them are produced in cooperation with foreign companies. The US decision to cancel the supply of Turkey with the necessary components for the production of reconnaissance drones may also be associated with the reluctance to strengthen competitor in the market of unmanned aerial vehicles.

Ctrl Enter
Noticed oshЫbku Highlight text and press. Ctrl + Enter
We are
Israel's defense industry. 7 partThere are some successes in our Fatherland
8 comments
Information
Dear reader, to leave comments on the publication, you must to register.