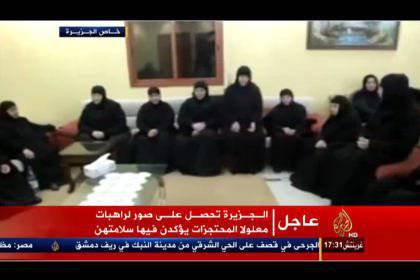 Syrians and all honest people in the world continue to worry about the fate of the abbess of the monastery of St. Thecla in the city of Maalyula and 12 servants of the monastery, kidnapped by terrorists during the attack on this ancient city, which is a shrine to Christians.


On Al-Jazeera, 6 December video was shown. Women sit next to each other, and some of them say that the militants did not kidnap them, but “took them out of the shelling.” They are allegedly well treated and released in two days. (These two days have already passed, but no one has released them).

There is one detail that makes one strongly doubt the sincerity of the words spoken in captivity, under pressure and threats. I had to go to Maaloule, as well as to Sendnaya and other Christian holy places in Syria. So, over the clothes of the nuns are always wearing big crosses. If you search the Internet for photographs of the Mother Superior of the monastery of St. Thecla before the abduction, this cross is clearly visible. In the video provided by the militants, the nuns are sitting without crosses!

It is impossible not to recall other cases in which people who are in captivity of bandits are forced to speak under their dictation. So, in the summer of 2012, in the village of At-Tel near Damascus, journalists of the Syrian television channel Al-Ihbariya were abducted. One of the staff of the film crew was immediately killed by thugs. The rest were forced to say in front of the camera that the Syrian army had allegedly killed him. Fortunately, soon the servicemen managed to free the journalists during a special operation. And then they told about the brutal murder of their colleague by gangsters - 60 bullets were fired at him ...

I also remember the case of the well-known journalist Ankhar Kochneva who was kidnapped by militants, who, under threats of murder and torture, were forced to "confess" that she was allegedly a "Russian spy." And two girls - nightclub dancers in Lebanon, one of them from Belarus, the other from Moldova - the militants who kidnapped them and transported to Syria, were forced to make a "confession" that they allegedly were Hezbollah agents. This is without knowledge of the Arabic language and without a Syrian visa!

So one can only guess how, under what threats, the nuns were forced to say what the insurgents wanted, who wanted to justify themselves. And what kind of pressure must be applied in order to force sincerely believing women to remove the crosses!

If the gangsters trying to call the kidnapping almost a “rescue operation” really would like to save the nuns - they would not be kept in a city where battles are constantly going on. As is known from the previous cases, the hostages are used by the “oppositionists” as human shields.

It is not easy for terrorists now - the army is crowding them. Released Deir-Atya, X-NUMX / 2 of the city of En-Nebec are under the control of military personnel. Next in line is the springboard of militants in the city of Yabrud (where they are supposedly being held hostage). Of course, 3 "bayonets" wouldn't hurt them. On each of those who are demanded to free the kidnappers - the killing of soldiers and civilians, complicity in terrorist acts, rape, smuggling weapons and other heinous crimes.

The militants' despair is also evidenced by the fact that they tried to make another information provocation: to accuse the Syrian authorities of the next use of chemical weapons. This time, allegedly, in the town of An-Nebec, nine members of the gangs were found dead with signs of chemical poisoning.

As stated by the command of the Army and the Armed Forces of the SAR, these statements of the "opposition" are absolute fiction. And Syria’s Permanent Representative to the UN, Bashar Al-Jafari, said that in this way Saudi Arabia’s supportive terrorists and other forces are trying to thwart the upcoming Geneva-2 conference.

This time the “information bomb” did not work. And how can we talk about the use of chemical weapons by the authorities after it is under the control of the inspectors of the Organization for the Prohibition of Chemical Weapons!

Meanwhile, Syria continues to be a fortress of resistance and a model for other countries. A delegation consisting of representatives of the Trade Unions of Teachers of Mauritania, Yemen, Palestine and Lebanon arrived in the country. They were received, inter alia, by the UAR Prime Minister Vail Al Khalki and the High Mufti Badr-ed-Din Hassoun. The delegates expressed full support for Syria and said that its struggle was an example for the entire Arab nation.

With great sorrow in Syria, the death of a prominent political figure, a fighter against colonialism and imperialism Nelson Mandela, was embraced. President Bashar al-Assad said that with his death, the world suffered an irreparable loss. “The world-famous freedom fighter, who has always been faithful to humanistic ideals, high spiritual values, principles of democracy and justice, died. He will forever remain in the consciousness and memory of mankind,” the head of state stressed, adding: “He was an example of integrity and firmness of mind, inspiring all oppressed peoples and instilling in them faith in the inevitability of the victory of the liberation forces over the aggressors and tyrants. "

Now Syria itself has to contend with aggressors and tyrants, but despite all the pain, all wounds and all losses, it wins!

Ctrl Enter
Noticed oshЫbku Highlight text and press. Ctrl + Enter
We are
Genocide of Christians in the Middle East. Millions of people have become a bargaining chip for American geopoliticsIn the desecrated sanctuaries
4 comments
Information
Dear reader, to leave comments on the publication, you must to register.