December 10 2013
3
Unmanned vehicles, controlled by the operator using the remote control, have long been used in various fields. Now the main task in this area is the creation of technology capable of working without human intervention. Due to the fact that most of the autonomous vehicles have so far reached only the testing stage, each new project of this kind has the opportunity to set a record for some parameters. For example, at the end of October, the American drone underwater vehicle Reliant, created by Bluefin Robotics, set a record for the duration and range of the voyage in a fully autonomous mode. 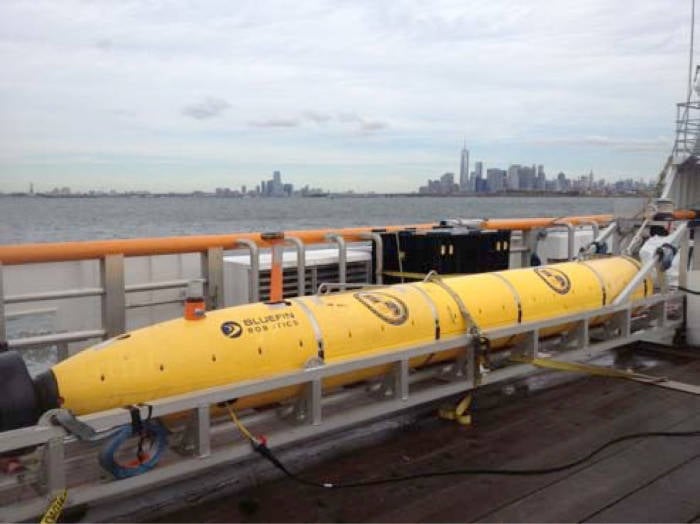 30 in October, the American company Bluefin Robotics announced the completion of regular tests autonomous machine Reliant. In 109 hours, the unit overcame 315 nautical miles (507 kilometers) and traveled from Boston Bay to New York. In recent years, the company has been developing various remote-controlled and autonomous underwater vehicles designed to perform various tasks. As for the Reliant project, recently works on it are going in the direction of increasing the range.

According to official figures, during its recent campaign, Reliant was walking at a depth of about 10 meters at a speed of about the 2,5 node. Every 20 kilometers of the route, an autonomous underwater vehicle surfaced to clarify its location using the GPS system, as well as transmit the necessary information to the testers. Judging by the published information, the underwater vehicle could have covered a few dozen more miles. At the time of completion of swimming, its batteries retained about 10% charge. The modular architecture of the Reliant unit allowed it to be equipped with 40 kWh batteries. The average power consumption per 100 km of track was at the level of 7 kWh.

The October campaign of the autonomous device Reliant showed the possibilities of a new type of technology. Although route planning took into account maximum energy savings, we can recognize that Reliant has set a new distance record. In the future, it is possible to increase the capacity of the batteries and, as a result, increase the range of the stroke.

The Reliant project is a further development of the autonomous underwater vehicle Bluefin 21. The new device is noticeably larger than its predecessor, however, it has slightly better characteristics. Externally, Reliant is similar to a torpedo and has corresponding dimensions: length about 6 meters, case diameter - 0,53 m. There are several sliding devices on the case. The submersible is equipped with several batteries, the total number of which may vary depending on current tasks. Inside the case there is a place for special equipment. In the future, the main task of Reliant vehicles will be to survey specified areas and search for mines. In addition, the possibility of using devices for anti-submarine purposes is not excluded.

The Bluefin Robotics company conducts projects of autonomous underwater vehicles by request of the US Navy. It is assumed that one of the new devices will be included in the special equipment of the ships of the LCS project. This, in particular, determines the size of the Bluefin 21 and Reliant. The diameter and length will allow the launch of vehicles using standard torpedo tubes or similar launchers. It is expected that the use of autonomous underwater vehicles, carrying a complex of sonar equipment, will significantly increase the size of the zone controlled by the ship.

The creation of an underwater vehicle capable of performing tasks in a fully automatic mode is associated with a number of technical problems. To improve the performance of automation, Reliant uses a combined navigation system. Determination of the current location of the device in a submerged position is carried out using an inertial navigation system. If necessary, the device can float to the surface and clarify its coordinates using GPS satellite system. The joint use of two navigation systems allows us to improve the accuracy of determining the coordinates of both the apparatus and the objects it has found. The effectiveness of this approach is clearly shown by the recent 315-mile campaign.

A combination system is also used to communicate with the control panel. The control panel and the autonomous device can exchange information via a radio channel or via a communication satellite. As long as the autonomous device is on the carrier ship, it is possible to wire it through the appropriate connector. Despite the possibility of remote control, the main mode of operation is considered automatic. For drawing up the program of actions the software, simple in mastering, is used.

Work on the Reliant project continues. Bluefin Robotics specialists are engaged in improving onboard systems and fine-tuning the design. In the foreseeable future, several more tests must be passed, the result of which can be both a continuation of the project, and a profound modernization and creation of a new one. A new multifunctional ship complex with autonomous underwater vehicles is planned to be put into service by the end of the decade. The first to receive it are the LCS ships, and later it will be possible to equip other types of ships with such systems.

It should be noted that the well-known appearance of the new American autonomous underwater vehicles allows them to be based not only on ships. In the future, systems like Bluefin 21 or Reliant may be used, aviation or coastal units. So far, the main objective of such equipment is considered to be the survey of specified water areas and the search for any objects: mines, enemy submarines, etc., but in the future it is possible to expand the range of tasks performed. How effective are the promising complexes - time will tell.

Ctrl Enter
Noticed oshЫbku Highlight text and press. Ctrl + Enter
We are
About the future of underwater roboticsProjects of autonomous uninhabited underwater vehicles of the “Harpsichord” family
3 comments
Information
Dear reader, to leave comments on the publication, you must to register.